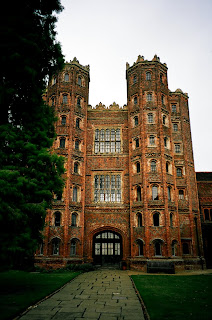 Essex can be gorgeous: did you know this? Apart from an earlier excursion to Constable Country, where we found 'I hate boring Dedum' (sic) painted on a stile, I had no idea. A weekend with the Le Franc family, however, in their rented cottage on the Layer Marney Estate, changed all that. It may not be as dramatic as Offa's Dyke country, but how's this for handsome samphire-covered marshland and an early Renaissance extravaganza of a gateway (a few hundred yards from the cottage).

Of course the landscape can be very bleak on a wet Sunday (taken on the isle of Mersea after one of the best seafood lunches ever):


But there are always gems like this to explore - Copford Church with its 12th century wall-paintings (slightly overdone in the Victorian restoration, but essentially authentic). I took this photo because the postcard didn't squeeze in the extraordinary zodiac signs on the arch as well as the splendid roundel of Christ enthroned in the dome of the apse:


Back in London, I loved the profanity of Caryl Churchill's Cloud Nine at the Almeida. It turns gender and race topsy-turvy but manages to be entertaining at the same time and gives the actors a real showcase for their craft. A man plays a repressed Victorian lady in the colonial first half, her son in the second (set in 1979, the year the play was written, but the three characters who return have only aged 25 years); the Victorian paterfamilias becomes a likeable lesbian's four-year old daughter; a stunning young actress (Nicola Walker) plays the girly son in part one and takes over the now discreetly liberated mother in part two. And so on. It hasn't dated and the sexual politics are still suitably confusing. The superb ensemble included two names I recognised from the original cast of Jonathan Harvey's Beautiful Thing, still one of the best ever evenings I've spent in the theatre, which I was reminded must have been nearly a decade ago.

The other great pleasure of the week has been to go through John Lanchbery's effervescent ballet score for the Ashton ballet (first a film and now a Covent Garden production, which I'm writing about in the Royal Ballet programme) of The Tales of Beatrix Potter. It struck me for the first time that the Squirrel Nutkin episode is a choreographic homage to Till Eulenspiegel; and how inspired that the piggies' Pas de deux should furnish the most lush and romantic, Tchaikovsky-influenced music in the ballet. I went back to my interview with the late lamented 'Jack' in 1995, and was delighted to find how much more material I could draw from it. Also a huge pleasure to have him playing the home Steinway so spontaneously.
Posted by David at 16:02

Delighted you've enjoyed Lanchberry's Tales of Beatrix Potter so much. Any info as to which pieces he reworked for the score? I think someone told me he'd used Victorian domestic and salon pieces, but I've never discovered which if any.

Enjoyed looking across at your blog. You should write more often.

Not sure if this is the right place to put my reply, but here it is: you can read the interview with Sir John in the forthcoming 'Tales of Beatrix Potter' programme. He was very cagy about his sources, being afraid of possible copyright infringement (made me turn the tape off as he told me this). But he did say that Pigling Bland's variation was derived from Minkus's ballet 'The Goldfish' and that the Pas de deux is NOT 'Love is like a violin' but a song from an operetta which was used for 'LILAV' called 'take a letter to my sweetheart'. 'Mrs Tiggywinkle's Laundry' is based on a piano study (again, he wouldn't cite the composer)

Beyond that, he wouldn't reveal anything, and I haven't traced any of the other sources. Most of his ballets' source materials are well identified in the Royal Ballet archives, but not this one.

By the way, I learn to my mortification he was never 'Sir John'. I discovered this after I'd written my Building a Library script, when the producer, Kevin Bee, amusingly greeted me with the news that I and the Queen were the only two people in the country capable of granting knighthoods.

Well, if he wasn't a knight, he jolly well should have been.