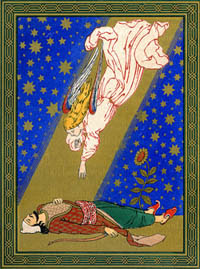 After the flatulence of Foulds's World Requiem and Korngold's Heliane, what a joy to go back to an intimate oratorio, touched throughout by gentle genius. Such is Schumann's Das Paradies und die Peri, launched shortly after his Wunderjahr of 1840 at a white heat which surprised even Clara. Based on Tom Moore's oriental fantasy Lallah Rookh - a far cry from his Irish 'melodies', which Jeremy performed a couple of weeks ago - this lovely concoction of Schumann's most emotional Lieder style with choruses of surprising delicacy and some very unpious ensembles has clearly won the heart of Sir Simon Rattle, who gave the most polished and flowing performance imaginable of it with the marvellous Orchestra of the Age of Enlightenment at the Royal Festival Hall last night.

He must have been delighted by his glorious line-up of soloists. I've misjudged Sally Matthews, probably because she was never cut out to be Figaro's Susanna; but here she soared and melted, capping the Peri's jolly and very unoratoriesque acceptance into heaven with a splendid top C. We had two of Britain's best tenors - Mark Padmore, committed as ever but straining a bit for the Langridge effect and lacking the bottom notes of this often low-lying narration, and Timothy Robinson, fresh from spooking us as Quint - as well as Kate Royal as the second soprano and the nurturing Bernarda Fink. I'm delighted Sir Simon sticks by David Wilson-Johnson: he made an amazingly good showing among glitzier company on the recent Mahler 8, and delivered his long solo in Schumann's third part with great dignity.

If there's a weakness in the work, it's that the composer doesn't do the macho battle stuff terribly convincingly; but the eternal feminine is clearly his element. Impossible not to come out with spirits discreetly soaring. On a personal note, too, I found it established the perfect emotional equilibrium between two extreme events I've attended recently - the 'naming' (ie non-Christian christening) of characterful one-year old Garance, at which I was delighted to be the 'celebrant', and the funeral of our friend Jill's mother Mary, to whom we were also close.
Posted by David at 10:56