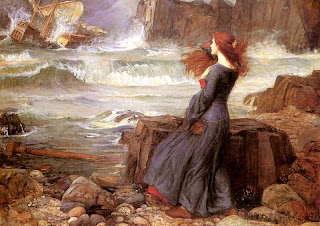 I’ve always wanted to know more about Sibelius’s most encyclopaedic masterpiece, his incidental music to a 1926 Copenhagen production of Shakespeare’s The Tempest, and its sea-change into something even richer in the two orchestral suites. So preparing a talk before the BBC Symphony Orchestra’s latest concert, with John Storgards conducting all the music of the suites re-ordered to coincide with an abridged version of the play, could only be a pleasure.

There are fascinating combinations in the original version, not least the haunting use of harmonium and a harp placed above the stage. But so symphonically at times does Sibelius engage his enlarged orchestra in the concert-hall transformation that the BBC and Storgards were probably right to go for that option – with one exception: once Prospero’s magic is broken, there should be no return to the music of the storm, as there is at the end of the first suite. Sibelius wrote a brief, austere and noble Epilogue for Helsinki in 1927, adapted from a 1904 orchestral piece called Cassazione; I played that at the talk, and I still think it should be how the music-drama ought to end.

It was possibly the most successful blend of actors and orchestra I’ve encountered in the concert hall, not least because instead of the usual spectacle of a famous thesp or two wheeled in for one rehearsal, only to find matching words and music harder than they thought, the BBC asked Di Trevis to direct a team of young actors fresh from drama school, and they seemed to have worked long and hard on this collaboration. The Prospero, Richard Goulding, was outstanding – used his voice superbly throughout several octaves, never tried to play the exiled duke as an old man, and remained vigorous and charismatic throughout. His is a name of which we shall be seeing and hearing much more. The Miranda, Sasha Higgins did her discovery-of-love scenes very charmingly and the rather more erratic but often quite compelling Benedict Hopper doubled Ariel and Caliban. Only the Ferdinand was disappointing. My friend Isabel, award-winning book abridger, thought the adaptation extremely skilful, even if it could have done with a few more tying up of plotlines at the end and a little less exposition at the beginning. Storgards is a marvellously incisive conductor, and characterised the miniatures as well as the more obviously bigger numbers.

I’ve been singing the hit tunes all weekend. But there ought to be plenty to please the modernists, too. Encountered an absurd friend-of-a-friend before the concert. ‘I shouldn’t be here’, she shrilled, ‘I hate Sibelius’. How strange, I said, I’d never met anyone who hated Sibelius before. ‘Oh, I know many who do. Too tuneful. I like dissonance. Have you seen The Minotaur? It’s had rave reviews.’ In a slightly chilly tone I said that I’d seen reviews which were less than raves, and told her there should be enough dissonance in some of Sibelius’s more outlandish numbers to please her. I wonder if she liked Brett Dean’s Ariel’s Music, a two movement clarinet concerto which could afford to condense its elegy and battle into a single action of half the length. It’s beautifully orchestrated, makes all the right gestures for the memorial piece it is – but where are the really strong ideas? As usual, Sibelius shows us what timeless creativity is all about.
Posted by David at 19:24