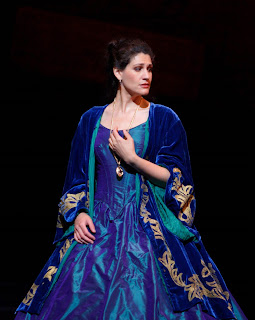 Having decided not to bother with another Royal Opera revival of Verdi's Simon Boccanegra, I changed my mind on two accounts. I toyed with the discovery that this was not the handsome-looking but action-wise rather pallid Moshinsky production yet again, but Ian Judge's staging of the original version with a new Council Chamber Scene to fit the stunning, Boito-led revision. The decisive factor, however, was that Nina Stemme had been replaced as Amelia by the half-German, half-Greek soprano Anja Harteros, whose Strauss Four Last Songs on CD I often play as the most opulently phrased, dramatically vivid account I know.

Pictured above by Catherine Ashmore in the very lovely crinoline designed for Amelia by Deirdre Clancy, which she uses to inform her eloquent movements, Harteros is the real thing, that rare bird the true Verdi soprano. Not since Freni and Scotto, I'd dare to say, have we heard the like (and Rupert Christiansen, whose opinion I often share, declared in the Telegraph that she excels Freni in this role). There's real spinto urgency to the big lines, but Harteros can also float exquisite pianissimos, perfect trills and that stylish swelling and diminuendoing on a note known as messa di voce. She looks a bit like a youthful Baltsa, which may be why one soprano I met in the audience thought her chest voice wasn't as impressive as it might be; but I'd already wondered at how true and unforced it seemed, and she's still young (in her mid-thirties).

Of course the opera is Simon Boccanegra and not Amelia Grimaldi or Maria Boccanegra, and a better line-up of Verdi singers I've never heard, even if Eliot Gardiner's strings lacked focused fire (the quieter, more dreamlike passages on the other hand were perfection). Gallo's troubled, peace-making Doge could be a bit coarse at full pelt, but like Harteros, he's a sensitive musician, and the quiet stretches of the best of all father-daughter duets were deeply moving. The tenor inhabits a relatively thankless part, but Marcus Haddock, whom I've admired as the perfect Don Jose and Don Carlo, sang as ardently as needed and helped to make the Act Three trio a real pleasure. Everyone was unanimous about Furlanetto's Fiesco - a true bass with emotion shaking the voice, and such presence. We shall be spoilt by his Philip II in the forthcoming Don Carlo - but will the Elisabetta be a patch on what Harteros, making an all too belated Covent Garden debut here, might have made of the regal lady, and is Keenlyside as much up to filling a Verdi baritone role as Gallo? Vedremo. Anyway, here are all four Boccanegra principals in the quiet, dignified final scene (photo again by Catherine Ashmore for the Royal Opera):


While I’m still hot on the Italian trail, I hope I can justify sweeping art and film into the same entry, since recent experiences in both spheres have been so invigorating. On Sunday afternoon, urged by a picture-restorer friend who works at the National Gallery, I caught the Sainsbury Wing’s Pompeo Batoni exhibition before it closed. Batoni was seduced away from his native Lucca to Rome, where he started out in the 1730s with a series of cheerful mythological and allegorical pictures. He’s best known, however, for his swagger portraits of British milords who dropped in to his studio during their Grand Tours. Every room of the exhibition had at least one gem I wanted to take home, but I was very much struck – especially after all the saturated reds and blues – by an exquisitely coloured Biblical scene of Hagar being directed by an angel to the desert spring which will save her son Ishmael’s life. Opposite it was a tender Sacred Family on loan from Rome's Capitoline Museums, the braided Madonna caressing the foot of her awe-struck son and watched equally adoringly by an aged Joseph: 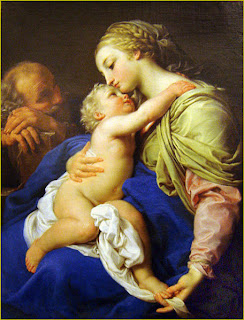 In the last room there were several more intimate portraits, including one of the bachelor Sir Humphrey Morice surrounded by the dogs to whom he would leave his fortune, and a humanistic study of David Garrick.

Neither of these was available to reproduce here, the exhibition having just finished and most copyright holders reasserting their rights, but I’m happy to display a thoughtful picture in the National Gallery’s own collection (and also seen in the exhibition), of Time instructing his daughter Old Age to spoil the features of Beauty, one of Batoni’s characteristic fresh-faced young girls: 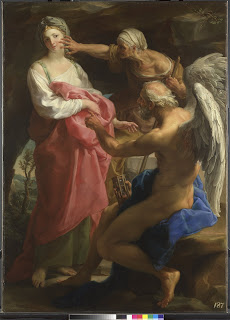 ‘Youth's a stuff will not endure', or 'gather ye rosebuds while ye may’, was also the theme of a wonderful film we watched at home thanks to the recommendation of a waiter at the Groucho Club and delivered by the ever-reliable Lovefilm, Le fate ignoranti (Ignorant Fairies, made in 2001). It’s set, I’m fairly certain, in the Testaccio district of Rome and directed by a Turk who also made the equally subtle Hamam, Ferzan Ozpetek. 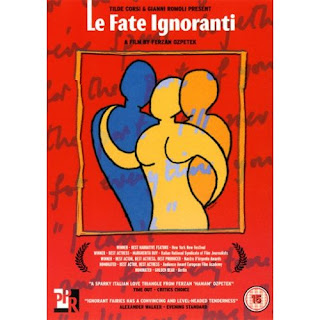 The plot could be open to obvious developments and sentimentality - a newly-bereaved wife finds out that her late husband has been having an affair for the past seven years,further discovering that the love-object is a man – but always avoids the expected. It seems like a sombre melodrama to begin with, set in a rather frigid bourgeois Roman house, but opens up to surprising laugh-out-loud humour and great pathos as the wife cautiously embraces the lifestyle of the gay lover and his alternative family. All the characterisations are beautifully observed - among the minor characters, there’s a particularly unpredictable plump Turkish woman with blue hair – and the cautious optimism of the film is very refreshing. I’ve not seen a better Italian (based) film since the heyday of Rossellini and Fellini.
Posted by David at 10:55