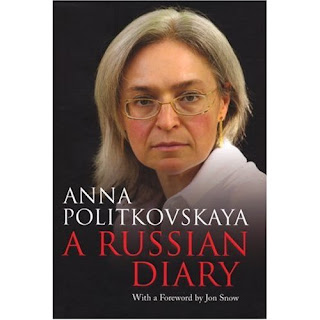 In A Russian Diary (Harvill Secker), a book so powerful and depressing that I had to read it in chunks with intervals in between, the soon-to-be-murdered journalist Anna Politkovskaya charted the new democracy in Georgia between the beginning of 2004 and the summer of 2005.

On 5 January 2004 Politkovskaya welcomes Saakashvili's 'Rose Revolution' and notes: 'There is a limit to how long you can trample people underfoot. When they really want change, there is nothing you can do to stop it. Is this what they are afraid of?'

On 6 October she laments that 'a serflike psychology has once again taken hold of the country, and rounds on anyone less servile. How malevolently Russian television rants when Yushchenko makes a mistake in the Ukraine, and as for Saakashvili, he is the Kremlin's bete noire. Georgia is our main enemy among the countries of the former USSR.'

Don't say we weren't warned. Though to be fair, Saakashvili was daft to fall into the trap that Putin set and to march into South Ossetia. The Economist wisely points out the maxim that, given a choice between an unwise decision and doing nothing, it is always better to do nothing. But doing nothing is not an option now for the west - even if it has to be more aware about Russia's extraordinary (and from their point of view understandable) hostility towards NATO.

A balanced view of Georgia's mistake, Russia's trap and the role of America's Neocons is to be found in Misha Glenny’s New Statesman article.

(28/8) The causes remain confused. Today’s article in The Moscow Times attempts to clarify.

How weird that I temporarily found myself agreeing with those Neocons - though as Glenny points out, their bullishness also spells terrible danger. Our (my) ambivalence towards the New World continues. I came back from Bard/New York loving the city much more than I had in 2001, when I was so disturbed by the gluttony and the general greedy overconsumption (I had hung around the horrifying delis near Carnegie Hall, which I understand are more for the little-American tourists - this needs to be spelled out, because a reader has misunderstood me). That's a theme that's treated, with much more lightness of touch than the critics have given him credit for, in Laurent Pelly's Glyndebourne production of Humperdinck's evergreen Hansel und Gretel, which I caught up with last night. The gingerbread house is a piled-high American supermarket of massed comestibles - lest you thought it could happen, or has happened, here, dollar signs gleamed aloft - but its dayglo colours still look enticing in Barbara De Limburg Stirum's brilliant design. Here's the first of Mike Hoban's production photographs:

Wolfgang Ablinger-Sperrhacke's drag witch is hysterically funny, but the hysteria supersedes the fun when the wig comes off and the supermarket unfolds to reveal rows of kitchen knives.

Those and the charnel-house chimneys which pop up lend a grim edge, but it's not overdone. Pelly knows how to make you laugh out loud, and he doesn't pile on the horror in the way that Richard Jones did in his terrible-mouth production for Welsh National Opera. Critics made unfavourable comparisons between Pelly and earlier Hansels from Pountney and Jones, and claimed he was dissing the po' white trash for the delectation of the dinner-jacketed punters, but that's going too far (and I found all three productions equally inventive). Even the hugely fat children liberated from the supermarket-house get a big laugh to start with, but then prove very touching and sad when they leap about. I enjoyed seeing the piles of body-suits backstage afterwards, but the photo I took really isn't interesting enough to post here.

Relatively little happens in Act 1, but I roared at the silhouette-comedy for the Hexenritt interlude, and unlike my colleagues liked the idea for the angel pantomime - hordes of white-clad Hansels and Gretels, spirits of the Witch's victims perhaps, playing with the rubbish and clustering curiously around the sleeping siblings. Kazushi Ono conducted with great sweep, so there was never a dull moment even in Mutti's monologue, and the 'liberation waltz' was irresistible, but there wasn't quite enough atmosphere, and nothing to fear either musically or production-wise in the forest of Act 1. Adriana Kucerova and Jennifer Holloway as the hyperactive children clearly needed a dose of ritalin, but acted their socks off (Kucerova is a real stage animal), and I liked the true Brunnhildesque tones of Irmgard Vilsmaier's mother, but Ablinger-Sperrhacke stole the show. Pantomime dame? Of course, why on earth not? He was on the company bus back to Lewes - I shared it with Charles Kerry (see June blog) - and asked to be let off at Waitrose's. To stock up on supplies for the house, I asked to his amusement before enthusing about his inspired comic timing. He seemed surprisingly quiet and modest after all that lighting up on stage.

My only regret about the evening - apart from a meeting-up debacle I won't go in to here - was that it meant sacrificing Gergiev's performance of Tchaikovsky's complete Sleeping Beauty with the London Symphony Orchestra at the Proms. The last time anything like this happened was with Rozhdestvensky and the BBCSO back in 1979 - I remember being one of the very few to attend as a teenager, and it was charismatic though rather scrappily played. The full score never gets played for the ballet in its entirety, so I was delighted when Harriet Smith gave me the chance to annotate each number for the programme. I'm pleased with the results, as I love this music as much as any, and you can refer to these detailed notes for the complete Sleeping Beauty online. Very nice things have been said about them today in the BBC Messageboard thread about Gergiev’s Prom. What could be better than inspiring someone who's been resistant to the ballet in the theatre to go and see it, just because she found Act Three much more enjoyable with the notes? Though I guess Ms Elleson may be disappointed to find how much music gets cut, especially in the fast-moving Royal Ballet version. As for the Prom, I've managed to listen to the Prologue and Act One this morning, and very lush they sound too, far removed from Gergiev's rather speedy recording with the then-Kirov Orchestra.

Stop press (21 August): only connect. The night after the Prom, when apparently he was supposed to be rehearsing the LSO in London, Gergiev was in South Ossetia conducting a memorial concert dedicated to 'our great Russia', according to this gobsmacking Times report. OK, so he's (North) Ossetian, but might it not have been wiser to use music as an angel of peace and dedicate the commemorative works to the victims of both sides? I'm chilled to think of our Valery and Putin as godfathers to each other's children. People will say, ah, it's Strauss and Furtwangler all over again, but those world-within-worlders who naively thought music could get along with tyranny were compromised, whereas Gergiev charges to the side of might without a moment's hesitation.

And again (23 August): watch the YouTube film of Gergiev’s Tskhinvali speeches in Russian (with interpreter) and English and decide for yourselves whether he went far enough in his plea for peace. With constantly reiterated words like ‘aggressor’, the equating of Tskhinvali with Stalingrad (ouch) and phrases like ‘the help and assistance of the Great Russia’, as well as his insistence only on ‘the days of 7th and 8th August’, I should say this is going to make difficulties, rightly or wrongly, for the organisations with which he works in the west. Sadly, too, in the meantime a peace concert held in Tallinn and shared between Estonians and Georgians went largely unreported.

Let's finally celebrate a genuinely joyous piece of Americana. Why was I deprived throughout my childhood of one of the cleverest and most heartfelt Hollywood musicals ever, The Music Man? OK, so we had endless repeats of The Sound of Music, but somehow this perfect show for kids of all ages didn't make much of an impact in the UK. 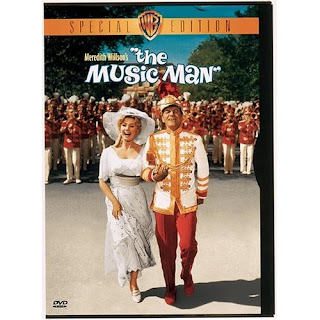 I was lured to hire it from LoveFilm when a poster on the sometimes hilarious Parterre.com mentioned Hermione Gingold's 'vocal filth' when she utters the name 'Ball-zac' (one of the many 'smutty' authors the mayor's wife doesn't approve of being stocked by the lovely librarian, Marian, so deliciously played by Shirley Jones - oh, I can feel another evening in with Carousel and kleenex coming on). The rap routines of the salesmen and Ohians are rather bewildering, but experimental for the time and the camerawork is ingenious; there are at least four hit songs, capped by the irresistible 'Seventy-Six Trombones', some terrific dancing, a touching kid with a lisp, and the relationship between slippery but loveable conman Robert Preston and good woman Jones is so nuanced in its development that both of us at home here were in tears - ah, manipulation - towards the end. Definitely one of the great musicals, so I'm ashamed not to have given it house-room before.
Posted by David at 10:24

Out of curiosity, I must ask: what, precisely, were the incidents of "gluttony and general greedy overconsumption" that so disturbed you at Bard College and in New York City?

By American standards, Bard College is anything BUT a wealthy institution.

By American standards, New Yorkers enjoy a lower standard of living than most of the nation's populace because housing costs are so high, because so much of the housing stock is sub-standard, and because State and City taxes absorb such a high portion of New Yorkers' disposable income.

No problems with Bard at all - did I say that? No, 2001 was spent too much around the diners near Carnegie Hall where the unspeakable skyscrapers of salt beef sandwiches set me off on the gluttony tack.