Preaching to the enlightened

I’d like to be able to say that Eric Richmond's novel if bizarre publicity shot of selected players from the Orchestra of the Age of Enlightenment shows them in a state of delirious joy after imbibing at my fount of wisdom. Well, it doesn't; but I think it’s fair to say that there was modified rapture on both sides after I returned to Kings Place (see below) sooner than I’d expected to participate in a study day organised by one of the OAE leaders, Kati Debretzeni, for the players.

I’ll run that by you again – for the players. And therein truly lies enlightenment. For what other orchestra would really want to sit through a whole days of lectures telling them how to play Tchaikovsky and sundry ballet excerpts, and – in my case – why?

Anyway, I’ve rarely enjoyed myself so much in a talk situation as I did on Wednesday, set before sixty top musicians all eager to know what’s so special about Delibes and Tchaikovsky. There, I think, even if I might still be doubtful about the virtue of playing Adam’s Giselle Act Two in concert, I could enthuse as well as give decent chapter and verse. And I found my exuberance rising with the lively participation. Needless to say, some of these players know more than I do – especially first oboist Tony Robson, who seems to have played the ballet scores before. Enlightened questions flew: might the 5/4 metre of the extraordinary Sapphire Fairy Variation supposedly represent a pentagram? What was the truth in Tchaikovsky using the metre just to fox and annoy the performers? As it turned out, they’d played my best-beloved slice of Sleeping Beauty, the ‘Sommeil’ Entr’acte, with Norrington, but I don’t think the connection between 100 bars of string tremolo and a century of sleep had been made then.

For sure, Jurowski will make the best possible argument, and of course they like him. His ‘Revealing Tchaikovsky’ festival is now under way, and will continue to stun and surprise. If you need a reminder of what's on, and why it's so unusual, see (again) the Southbank Centre’s festival webpages with the programme and my introductory article. Anyway, from Kings Place I cycled to the Southbank for the opening of the series (of which the two OAE concerts form an important part) – encountering en route a magical sunset over the great Thames vistas from Waterloo Bridge.


The festival kicked off with the LPO in a refined and ultimately (in the ‘None but the lonely heart’ sequence) very moving performance of Stravinsky’s complete Fairy’s Kiss ballet. The First Symphony seemed so fresh-minted, too. Is there a more consistently beautiful, melodiously unbroken slow movement than this? The one in Dvorak’s Sixth comes close, but there are storms there; Tchaikovsky’s novelty is to frame the lyric inspiration with the love music from his Katya Kabanova tone-poem The Storm, and then let it unfold in endless rainbow hues. The finale is usually a problem. On Wednesday, it wasn’t: the dark folksong undertow was present throughout the official celebrations, and the final parade sounded suitably hollow and threatening. 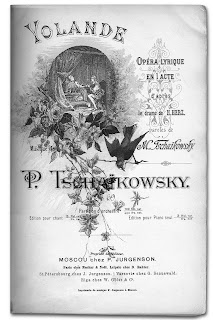 On Saturday we had a better-sold event, the late one-act jewel Iolanta. As I was quick to point out in my pre-performance talk, this is no neglected rarity: the UK has witnessed two productions and two concert performances in just over a decade and a half. But I can say hand on heart that while I’d always enjoyed it as a string of set-pieces, most of them reminiscent of earlier Tchaikovsky operas, and strung-out recits with the occasional startling grace of miraculous woodwind scoring, on Saturday night Jurowski made it work as pulsing drama. The meltingly lovely voice of Tatyana Monogarova came with a very touching image of the blind princess, and much was made of the red and white roses which reveal to the smitten Vaudemont that the object of his affections has no idea of her sightless condition. Alas, no publicity photos were taken of this, so in contrast to the raven-haired heroine all in white clutching her roses, I offer a now rather out of date photo of the latest Russian diva. 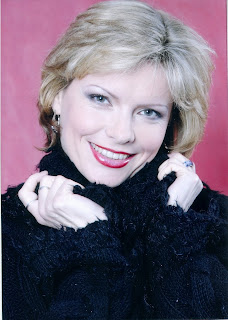 The line-up was flawless, down to the very small roles of Almeric (young tenor Peter Gijsbertsen) and Bertrand (character bass Maxim Mikhailov). How we love to see the relaxed demeanour of the indestructible Sergey Alexashkin, and how amazing to welcome yet another Slavic tenor of tireless strength in Yevgeny Shapovalov (though I’m so sorry that Gegam Grigorian, a blazing Vaudemont on the Gergiev recording, has come a-cropper). The Martha was Alexandra Durseneva, a dazzling Duenna in the Glyndebourne Betrothal in a Monastery and plausibly concerned for her charge here.

I’m a bit talked out: two hours on Hoffmann Monday, two more with my BBC Symphony students Tuesday, the OAE afternoon on Wednesday, Iolanta on Saturday night and – by no means the least of these events – a warm and lively pre-performance interview with Catalan composer Benet Casablancas before the BBC performance of his 1989 Seven Scenes from Hamlet. 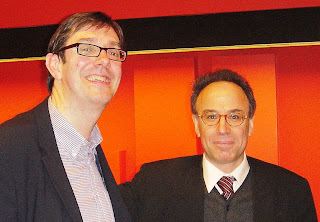 Working through the score with the students, I felt a bit like echoing Prokofiev on Stravinsky’s Fairy’s Kiss. He wrote: ‘I’m glad you liked The Fairy’s Kiss; I’ve always said that Tchaikovsky was an excellent composer’. And in commenting on the Seven Scenes, it was a case of ‘I’ve always thought that Berg was an excellent composer’. But this was composed twenty years ago, when Casablancas was still under the spell of Berg doyen Friedrich Cerha (he is much more keen that the BBCSO take on his latest, Tempest-inspired score). And, in any case, the Hamlet Scenes constitute excellent Berg. In performance, the idiom completely won me over. This had much to do with tear-jerking speeches from actor Ray Fearon, but also with the expressive playing of the BBC soloists, especially in the music for Ophelia, the Jig for the Players and the final high weave of strings for 'The rest is silence'.

They really are on top form at the moment. Conductor Josep Pons seemed happy to allow the cor anglais (Alison Teale) and oboe (Richard Simpson, one of the world's best, and such a modest man) room to sing, so Ravel’s Rapsodie Espagnole sounded like the miracle of sound and space it truly is. Turina’s Danzas Fantasticas seemed to me a bit of a waste of space – we could have had Chabrier as a curtain-raiser – but the promised highlight made its mark. This was Falla’s complete El amor brujo ballet with a real flamenco artiste, as happened at the 1915 premiere. Ginesa Ortega looked extraordinary in her frills and roses – three hours in the making-up, someone backstage claimed – and although the strange and not quite projectable delivery took some getting used to, it certainly pierced the heart. Why are there never photographers around when you need them? Like Monogarova, Ortega will have to pass unrecorded in her costume for the occasion; and this publicity shot, again, will have to do. 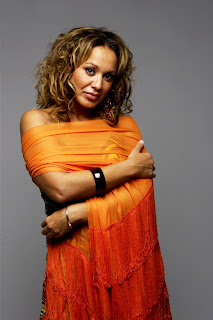 Falla's ballet is a marvellously authentic score: not layered like the Ravel, but appropriately dressed in bright orchestral colours and clever in the move from the shrill trumpets of the ghost-lover to the tender victory of el amor. Another wonderful programme from the BBCSO.

By way of postscript, I should add that you can now post your greetings/contentions/disagreements here more easily - I've found a way which saves you having to sign up as a Googlista. All messages are subject to moderation, so no Parterre trolls slagging off British singers, please.
Posted by David at 10:09