Borough on the Baltic? 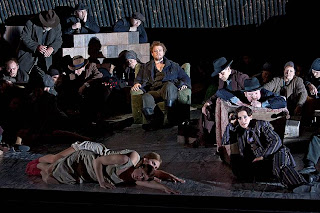 That was my first startled reaction to David Alden’s new English National Opera production of Britten’s Peter Grimes. As the Borough (aka Aldeburgh) types step forward at the inquest for the fisherman’s dead apprentice, it looks as if decadent Berlin has taken a trip north to the German coast – not least in the shape of an Auntie who looks like Dix’s Sylvia von Harden in fur coat and stripy suit (Rebecca de Pont Davies) and her two Nieces (Gillian Ramm and Mairead Buckle), ma(e)dchen in school uniform. And when at dawn the village worthies start behaving like characters out of Fritz Lang, with the weirdest of dumb-shows from the Nieces, the homage to German expressionism seems over the top. It’s only when the incensed villagers wave union jacks at the height of their second witch-hunt that we’re back in blinkered Blighty. The 'relations' are in the foreground of Clive Barda's picture for ENO above - same credit for the two below - with Stuart Skelton's Grimes seated for his Pleiadic monologue.

Well, Alden has a point: all this is only as stylised as Montagu Slater’s libretto (the one thing that grates on me the more I see Grimes, especially in Ellen’s pious lyrics; what a come-down for Britten after work with Auden on Paul Bunyan). Yet I’d prefer a middle ground between this and the absurd naturalism of Trevor Nunn at Glyndebourne, who tried to get everyone singing with a Suffolk accent. Tim Albery in the previous ENO production came closer to my ideal, and gave us more of the sea – here walls and corrugated roof only open up in Paul Steinberg’s compelling image for Sunday morning, the sun shining in the foreground with grey skies louring over the waves in the distance. Again, if Alden’s observation is that the seascapes of the interludes are in the characters’ souls, that’s valid too. Always interesting, he draws maximum contrast between the hugger-mugger scene of the village dance, suitably weird in a Richard Jonesian way, and the open beach for Grimes’s final monologue (those grey skies again).

Where, though, do Grimes and Ellen fit in all this? 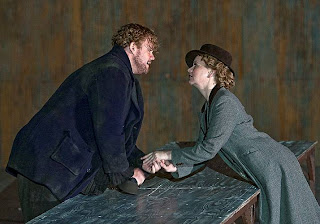 I’ve seen reviews which suggest that they’re the only sane ones in the show, blunting their impact. But if Alden seems to go easy on the sadistic fisherman, that’s surely more to do with Stuart Skelton’s heldentenor Grimes. A Lohengrin voice from the start, he produces a beautiful sound at times but doesn’t for me make enough of the fatal fracture between lyric vision and violent impulse; for this, you need more vocal colour and greater dramatic projection. So it seems daft to label him a cross between Vickers and Pears; have folk forgotten so quickly Heppner at the Royal Opera or Langridge’s interpretation in the Albery production – so searing in his inwardness, so scary in his mad pacing? Skelton was, at least, touching in a rather childlike way throughout the last scene. Amanda Roocroft’s innate dignity is useful for Ellen, and ‘Let her among you without fault’ was the vocal highlight of Act One. If the voice frays at the very top - and she had some trouble with the Embroidery Aria - that’s a small price to pay for her conviction. 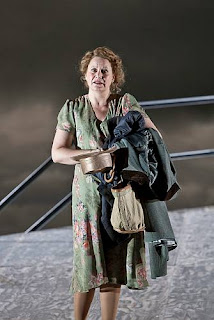 The women’s quartet was especially moving in its strange way, though odd for those Nieces to turn so suddenly into human beings.

Musically, the rest is splendid. Among the other roles a little constrained by Alden’s fascinating take – as especially, I felt, was Gerald Finley’s one-armed Captain Balstrode - Felicity Palmer’s Mrs Sedley finds the mezzo still in remarkably good vocal health. The chorus delivers the expected impact, and Edward Gardner has done sterling work polishing up the ENO Orchestra; the brass especially packed a focused punch in the storm and the great central Passacaglia. Here was the ideal balance between long, tender lines and naked terror missing, for me, in Skelton’s portrayal.

I've always had a problem with how much we’re expected to sympathise with Grimes. He is, after all, a dangerous man, a child abuser in the physical if not the sexual sense; so isn’t the Borough partly right to try to stop him, and wrong to let him off the hook at the start so easily? Alden’s best touch, I think, was to make the posse’s arrival at the hut complicit in the second apprentice’s demise: startled by the knock at the door, Grimes drops the rope, and in that second the boy tumbles to his death. So that, at least, is tragic mishap. But we’re on dodgy ground simply seeing the protagonist as an outsider figure through whom Britten expresses his own estrangement.
Posted by David at 16:45

How nice to see your comment on my blog! I missed the first one because I've long since given up imagining that anyone might read it...

Haven't seen Grimes, although a friend of mine described it as 'Britten meets the League of Gentlemen', which made me smile.

I'm seeing 'Cosi' on the first night, which I'm looking forward to since (as you may remember) I carry something of a vocal torch for la Gritton. Although Private Eye tells me that the director has been refused entry to the country and is directing via mobile phone from Paris, which sounds... interesting.

Yes, la G was stupendous when she last appeared in an ENO Cosi - Matthew Warchus's, 30s setting which I liked a lot (it didn't last as long as it should have done). Didn't think she'd manage it, but her 'Per pieta' was spellbinding.

It's a shame - or worse - that Kiarostami wasn't given a visa. I gather his assistant is present, though.