All nature as a garden

It was Horace Walpole who said of William Kent that he 'jumped the fence and saw all nature was a garden'. Sandwiched chronologically between Charles Bridgeman and Lancelot 'Capability' Brown, Kent took up the 18th century delight in placing not only ruins and follies in a landscape but also a whopping great lake. And I've never walked round a larger one on a man-made scale than the topographically complicated specimen at Wotton House, Buckinghamshire, to which we travelled on a blazing May Saturday for the engagement of our adored, vivacious Stefania of Ascoli Piceno with Ben of Saxmundham (it was his uncle and aunt who opened the doors of Wotton to the party).

Wotton has a curious and typically English history: built in 1704, restored by Soane after a fire in 1820 and later divided up, it was salvaged by the evidently redoubtable Elaine Brunner in 1957 just as it was about to be demolished. Her son-in-law now maintains it with the help of only one gardener, which I found astonishing. The Blairs have a weekend home in one of the side pavilions, for which they paid a modest four million - and I do hope we taxpayers aren't upholding the heavy police presence. The following photos were all taken on friend Jill's mobile as I'd left my camera battery charger in Lewes. 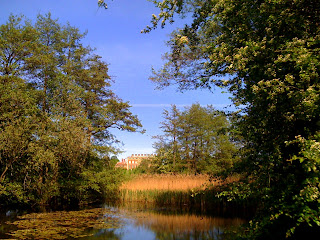 Water is the most interesting object in a landscape, and the happiest circumstances in a retired recess; captivates the eye at a distance, invites approach, and is delightful when near; it refreshes an open exposure; it animates a shade; cheers the dreariness of a waste, and enriches the most crowded view; in form, in style, and in extent, may be made equal to the greatest compositions, or adapted to the least; it may spread in a calm expanse to soothe the tranquillity of a peaceful scene; or hurrying along a devious course, add splendour to a gay, and extravagance to a romantic situation.

The water-course at Wotton, laid out by Bridgeman though of course 'Capability', as the more glamorous name, gets the credit - he was first an under gardener and then may have added a few details - certainly opens up new perspectives at every turn. As Whately wrote, 'if the water at Wotton were all exposed, a walk of near two miles along the banks would be of tedious length, from the want of those changes of the scene, which now supply through the whole extent a succession of perpetual variety'.

I won't attempt to reproduce Whately's long amble, but I ought to illustrate each of the 'four principal parts' along the trail. Those of the engagement party willing to excurt first trailed down an avenue of fruit trees and ancient lilacs - here's our ubiquitous Sophie, who's blogged herself in two other location shots, beneath one, lush water meadows in the background - 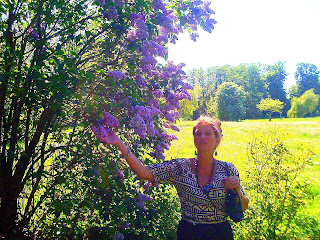 and then followed Whately's 'reach of a river, about the third of a mile in length, and of a competent breadth, flowing through a lovely mead'. 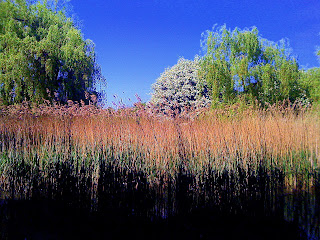 This part of the walk is lined by venerable chestnuts: 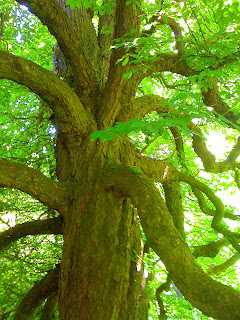 We left the group quaffing by two Tuscan temples - Barrett style replacements of the originals? - wandered with a delightfully squiffy Sophie to the five arch bridge which disguises the change of levels between two stretches of water 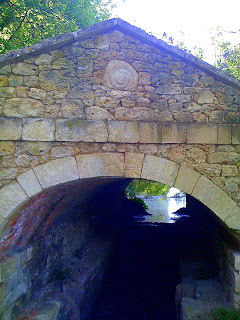 and left her recumbent beside the champagne bucket, striking off on our own and little imagining that a group including several octogenarians would also be completing the entire circuit. Near the China Island where once stood an elegant tea house - removed from Stowe, transported to Ireland and then returned by the National Trust to its original setting - is what Whately called 'an elegant bridge with a colonnade upon it'. 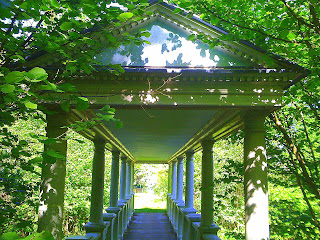 Eventually you come in sight of the largest stretch of lake, with perspectives over to an island with a grotto on it and glimpses, beyond that, of a rotunda. 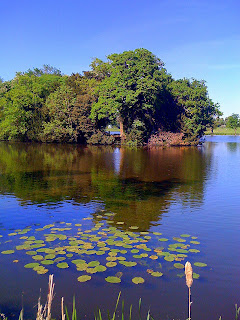 Two more exotic follies have been better restored than the rest: a Chinese or crescent bridge 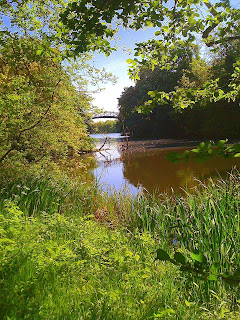 and a Turkish kiosk. 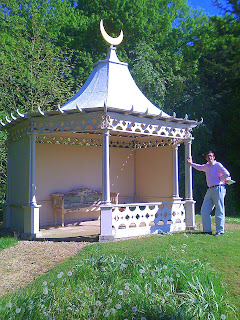 None of this really captures the grand sweep of the design. The lake must be three times the size of Stourhead, and of course it made me yearn to go to Stowe. The scope and the constant change of perspectives are what make it so magical, though of course there are more intimate lakes I love best of all. Glyndebourne, it goes without saying,

and the long thin stretch of water at Chiswick Park, which I biked to again late yesterday afternoon. The moorhens continue to nest tenaciously on the water, though now the greenery has rushed on apace, with rhodies and grasses in abundance. Wyatt's bridge I can't resist reproducing again, so perfect is it

and another view of the house

before coming in sight of the cascade at the south end

which yesterday was in full spate.

And isn't Burlington's grand staircase on the north side of the house one of the wonders of Palladian architecture?

I do marvel that all this is looked after for everyone, and for free (the gardens, that is, not the interior of the house), by the council in conjunction with English Heritage. And to think that, just as Wotton was partitioned and scheduled for demolition, so Chiswick House lost Burlington's private residence at the side and was a private mental institution until its state purchase. There's quite a lot of work going on at the moment, but if it continues as it's begun, it will be more than worthwhile.
Posted by David at 09:52

Terrific energy, David - as impressive as your 'eye'.
Enjoyed learning more about these landscape gardeners. Where does Uvedale Price come in? Cannot forget him being spoofed by mischievous Peacock in 'Headlong Hall' in the form of Marmaduke Milestone ... that bit about the unexpected being an essential component of the picturesque landscape, slyly skewered by someone innocently enquiring 'but what happens on subsequent visits?'
I rather think you've proved them wrong, and MM right: the landscape changes all the time; even if the follies remain static, the natural components of the view are in constant flux.

Super to see Peacock mentioned. And the remark about not being unexpected on a subsequent visit does not ring true if one replaces " the unexpected" by " a dramatic impact". The trumpet in Fidelio for example - just as much an impact even though one knows it is coming

There are many gardens attributed to Capers B but in fact by others - and scholarship is now restoring the others to life ( example Fiona Cowell's recent book on Woods). The more interesting question is, who invented the "english garden" ? Or was it embedded in the spirit of the english culture of the age ? What a relief after all those formal beds

And do not forget the remark by one of the Rothschilds, that even the smallest garden should have at least two acres of wilderness

Yes, isn't she clever? My acquaintance only extends to 'Nightmare Abbey', which as a stage play won an Edinburgh Fringe first in the hands of the brilliant Eleanor Zeal and our much-missed mutual friend Nell Martin.

Uvedale Price - I'm mugging up on this as I write, I'm afraid - is later: turn of 18th and 19th centuries, near-contemporary of the better-known Repton.

Of course, what also makes the landscape change all the time is seasonal growth, though I suppose if the visitor returned at the same time of year, that wouldn't apply.

from Tammy Travers
The next time you visit Kent be sure to visit Whitstable. I was at boarding school nearby in the seventies and it was then nothing like the fashionable,interesting place you will find now; I visited some really good restaurants there recently, priced very affordably.
Tamsin Travers

Not sure where Kent comes into it, Tamsin - maybe you meant to post a coastal memoir in the Newhaven chunk - but I too know Whitstable well from before its transfigured foodie incarnation: we spent every Whitsun week for years with an unofficial aunt at Tankerton.

It's all a bit built up, though, that part of the coast, isn't it? My ideal would be to have a good fish meal preceded or followed by a good walk up on to cliffs.