An Olympian in the Alps 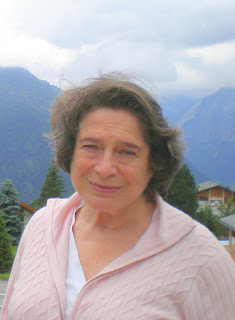 I've turned Schubert-crazy again. As with Wagner, the mania comes and goes in waves. It all started with The Greatest Piano Recital I've Ever Heard, Richter's at Chichester Cathedral in March 1989, when he took an hypnotic half-hour over the first movement of the G major Sonata (D894). Then I hunted out all his recordings of the sonatas, and found his heavenly length the only way I wanted to hear Schubert. Now his one-time duo partner and protegee Elisabeth Leonskaja has come out from under the Richter shadow and forged her own great interpretations. And it's the palmy days of Richter all over again, though with a very different musical personality at the helm. 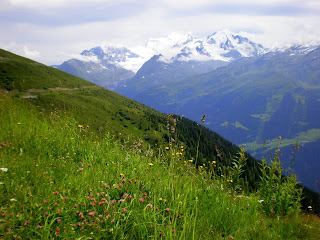 At Verbier high in the Alps, where I've just been privileged to spend three and a half music-and-walking-packed days, Leonskaja is currently working her way through the complete Schubert sonatas - half of them for the first time ever, as she told me in an interview which will appear probably around the time of her return to London to play D894 later this year. She clearly had as much smiling affection as I did for the first of the three late-night programmes I was privileged to hear in the vast temporary construction of the Salle des Combins. There, having moved from an apparently disastrous encounter with a poor piano and rough acoustics in the Verbier Cinema, she played the Sonata in B major, D575, and the unusual five-movement E major, D459. Hardly a couple of bars pass without Schubert revealing his own lovable, harmonically wayward personality, and you can rarely predict the progress of a melody (the third movement of D459 struck me forcibly in this respect).

So what is it that makes Leonskaja's Schubert so special? I came late to her extraordinarily deep and thoughtful concert-hall approach - music as a sacred rite - with the second half of her Chopin recital late last year. Here, it seemed, the range was extended. She can indeed be as Olympian as Schubert himself (her word for the opening movement of D850), with that fabulously weighted full sonority; but she catches the essence of his ability to leap from the thunderously epic to the intimately lyric. So we ranged - forgive the corny images prompted purely by a desire to put up a couple of Verbier snaps - from the babbling, high-altitude brook of D850's delicious finale 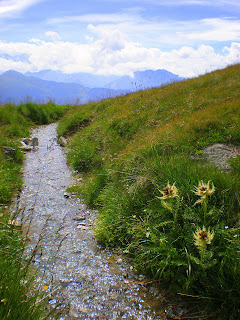 to the forbidding heights, glaciers and cataracts that disrupt the ineffable slow movement and finale of D959 (a performance which brought an instant standing ovation, as the colossal D major Sonata should have done the previous evening). 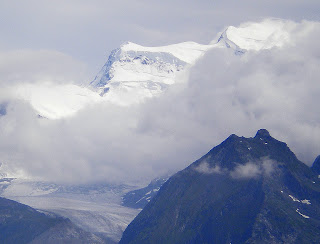 The articulation is phenomenal, the emotional commitment total. And the stern, concentrated figure on the platform is in extraordinary contrast to the vivacious, humorous woman you meet offstage - though one thing, a great humanity, connects the two.

And for now I'd better stop waxing lyrical, return to Verbier another day (due for a big Arts Desk piece on Sunday) and just count myself lucky to have heard great pianism in hugely contrasting styles, from Lewis and Pires at the Albert Hall on Wednesday to the 18 year old Kit Armstrong pouring forth musicality and playfulness in a Verbier trio concert and, of course, Leonskaja magisterially at the heart of it all.
Posted by David at 10:45

Welcome back!
I was definitely Schubert-crazy until my 30s, when it suddenly ... stopped. Time for review, prompted by this delightful post. Your descriptions (+ illustations) of Schubert's music do work well.
I trust we téléspectateurs/trices in France will see the concert in question (the cream of Verbier concerts televised via Arte): certainly hope so!

I rather fear not, Minnie - no cameras in sight for the late-nighters, though there were two Big Brother camera eyes peering through the wall at Kissin (a concert I WOULDN'T wish to see again).

Schubert is for later life, definitely, I'd have thought. All those approaches to death. A great consolation in life.

welcome back,David. inspired by leonskaja too I looked for her CDs today in HMV. Alas,very little available but i did find an Apex disc of Schubert sonatas including D959. Having read your blog I can hardly wait to play it (only its a bit late)

Ah, Paul - good to hear from you. As I said, D959 got a standing ovation. Alas, had to leave before the jewel in the crown, but still...living in hope that the Wigmore's label may release the BBC performance (of D850) from earlier in the year.

Have to say none of EL's recordings I've heard have quite lived up to the live experience. As a critic from Basel said, some of the crescendi were so subtle they might not register on CD. Be interested to know what you think.

I think I would like to approach Schubert's piano music through Herr Schiff since, while he will have certain ideas of his own, his writings strongly suggest a commitment to what Schubert wants. It would also be nice to hear a fortepianist or more with a similar commitment.

Go thy way, JV. Schiff in Schubert to me is just a bit woolly. Surely emotional authenticity is more important? Like Beethoven, Schubert was straining at sonorities beyond the ken of the piano of his time. Leonskaja is encyclopedic.

Hum, still not keen on Schubert. Having had a brush with death a few years ago, no longer live in fear of it. The event ended up scuppering my future, though. So no, it's the bits in between that fill me with dread!
Finzi's setting of 'Fear no More' does the trick for me ...

I must reluctantly concede your point about a certain wooliness in Herr Shiff's _Impromptus_ at least, though wonder how much that is influenced by the
microphone placement and/or the Boesendorfer instrument on which he plays his Sonatas, and presumably the other as well. If only we could have it all, fidelity to Schubert's texts and
markings as well as whatever considerable emotional depths they reveal! And indeed Mr. Richard Wigmore, in a 1997 collection of articles on Schubert (I
think it might have been in _BBC_ _Music_ _Magazine_, but would have to re-check), pointed up how Schubert often stretches the boundaries of the media
for which he wrote and the musical language of the time. Herr Schiff also contributed to that collection along with Miss Cooper, Mr. Bostridge and Mr.
G. Johnson, all adding fascinating perspectives! Two Sonatas I think I would like to get to know better are _D._ _784_ and _845_ since both were praised in those articles.