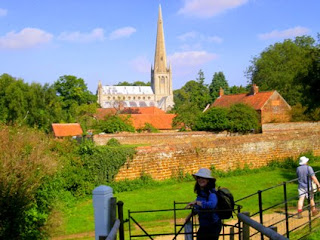 Before returning to the knotty problem of Vaughan Williams, I ought to make the long overdue announcement that the sum total of invoking a benign Mammon for this September's Norfolk Churches Walk was £764. That’s well down on last year, but times are harder and our dear friends are no doubt suffering from annual chchugging* fatigue. Anyway, the amount will be no doubt be gladly received by All Saints Burnham Thorpe, the ‘Nelson church’ where fellow-walker Jill’s mother was warden (we carry on walking annually in her memory as well as for the good of our health). Thank you, all and sundry.

Some folk get the impression from all this that I’m seriously religious. Decidely not, except in the vaguest sense: I’m happy to cast myself in the role of VW’s Pilgrim and not Bunyan’s Christian. So a not untopical farewell to this year's venture with a detail of one of the misericords in St Margaret's Minster back at King's Lynn, our town base for the walks. The cockleshells on the shield are pertinent as symbol of that pioneering pilgrim Saint James. 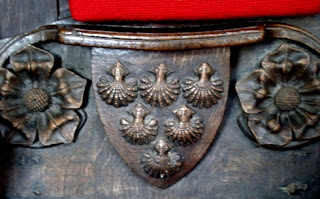 The City Lit students and I carry on making headway with the operatic Pilgrim’s Progress in class. It makes a lot more sense to me now that I’ve heard much of the music’s origins in a 1942 Radio 3 dramatization of Bunyan starring John Gielgud as Pilgrim. No wonder much of the opera sounds like film music, as Sarah Playfair in a neighbouring seat on the night remarked. It works much better in two or three minute chunksworths of incidental music, as the late Christopher Palmer’s excellent truncation of the 1942 venture on Hyperion allows us to hear. Gielgud reprises a small part of his role, and Richard Pasco is smooth-tongued as just about everyone/thing else. 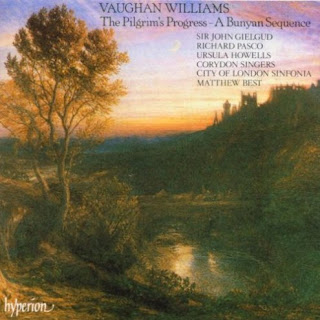 Here foul fiend Apollyon does not outstay his welcome (and his seventh-leaping intervals return in a terrific brass fugato for Giant Despair, sadly not represented in the opera). The first half of the radio Vanity Fair sequence is divided into three pithy set pieces: the hustle and bustle; a waltz for a solitary Wanton which, kicking off with two violins and harp, is much less overloaded than its counterpart in the opera; and a splendidly extended whirling-dervish number for jongleurs (we get only a bit of it, with voices pasted over it, in the opera). The Tallis Fantasia-related Alleluias for the Celestial City’s reception of burnt-up Faithful, Christian’s companion in the book who meets his end at Vanity Fair, are more moving in their simplicity than the later apotheosis for Pilgrim in the opera. 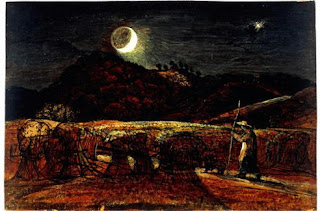 Coming to the stage Vanity Fair, I felt I had to apologise for it not only with the radio music but with more varied, inventive VW dissonance/naughtiness in the Sixth Symphony, the ‘John Jayberd of Diss’ sequence from the Five Tudor Portraits and that outstanding ballet score of 1931 Job. Here’s the sax music for Job’s comforters followed by the vision of Satan on God’s throne. Vernon Handley’s London Philharmonic insinuaters don’t smooch as splendidly as Boult’s, but it’s another Handley performance I like very much as a whole. And it’s good to have Youtube presenting some of the Blake illustrations which inspired VW.

Thinking about it, though, the grinding monotony of all those parallel fourths and fifths in the opera might work better if the town crowd were less dolled up for fun than they were in Oida’s production. I see them, as well as Apollyon, in black and grey. For there is no mirth, no light entertainment here. How about a production where Pilgrim’s progress is mostly through Samuel Palmer landscapes – no cells, no electric chair, if you please – but, encountering real opposition, hits the reality of the post-war grimness which must still have been on VW’s mind in 1951.

I’m reminded of Bill Bryden at the Royal Opera setting Parsifal in a bombed-out Coventry Cathedral. Not everybody liked it, and there were a few incidental sillinesses, but I found the ritual conducted by plainly dressed folk angled along long wooden tables convincing, for once (it helped that Haitink’s conducting had such a naturalness about it). Below, Abraham Pisarek’s photograph of a Saxon flea-market in 1945. Draft in a few whores, roaring boys and legal types, and there’s your Vanity Fair. 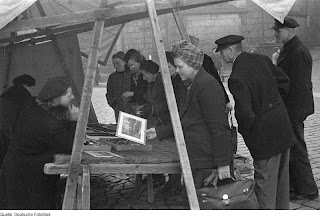 So that’s it: my idea for staging The Pilgrim’s Progress. Though I very much doubt that anyone else after ENO will want to put it in to action. Anyway, on with some trepidation to the Bieito Carmen next week. Over the last, I’ve had such a rewarding trio of concerts to review for The Arts Desk: the perfect servings of Haydn and Strauss from the incandescent Yannick Nézet-Séguin – three cheers, incidentally, for an out-and-proud gay conductor, there aren’t many; Alice Coote, the Janet Baker of our age, as Britten’s Phaedra at the end of a jam-packed Wigmore concert from the Britten Sinfonia also weaving in Purcell, Handel and Tippett; and an intriguing if not entirely successful BBCSO programme cannily following the eastern inspirations of Rolf Hind’s often compelling The Tiniest House of Time with Rimsky-Korsakov’s Scheherazade in the ‘deep sound’ Bělohlávek protégé Jakub Hrůša likes to command. The Radio 3 broadcast is scheduled for Sunday afternoon.

*once again, that's church charity mugging
Posted by David at 12:50

As regards religious belief, there is the observation of the (atheist) Astronomer Royal( Master of Trinity Cambridge, OM etc etc) that the human race seems to be hardwired with religious belief, which supports Jung when he wrote that if the Christian religion is not true, it is certainly psycologically valid. But I prefer Churchill's analysis. As a young man he came up against the question of the truth of Christianity and looked around - there was the virtually infinite universe with millions of stars revolving around each other for ever and ever. Just as unlikely as a personal God,he thought, and he decided to believe what he wanted to believe [and ( I would add) we know so little that to say we can see the stars goes no distance to answering the question Why?]

I wholeheartedly adhere to Bryan Magee's statement - wish I could find the book, he puts it so much more eloquently - that, though agnostic, he finds so many wonders of life unexplained that he has to admit even the faintest possibility of something beyond death. And even if they are explained, what's behind that? No wonder so many scientists become philosophers.

I for one prefer the Churchill view to believe what you want to believe. BTW whose birthday is today.
Would love to attend those music classes, how very interesting it must be.

Congrats on your Norfolk churches pilgrimage (sorry if I'm rather late on that one). Surely much more fun than the opera as I experienced it at ENO.

I feel a bit like I'm tilting at windmills myself keeping up with all the listening I want to do coming out of your posts (not to mention the Arts Desk pieces you've noted). I'm very sorry I didn't catch the 7 day period for the Britten Sinfonia, but I did this morning hear the "Family Concert" that included Hind's piece live, and am very glad I did. I’m “on the road” this week, but hope to be able to have another listen before the 7-day period flies by. I think the Hind must qualify in your category of rich and strange, no? Quite the soundscape!

I've also cued up for a listen Vaughan-Williams Job, Symphony 6, and Five Tudor Portraits. I would never have guessed VW as the composer of the Job clip you noted. I'm beginning to wonder if the VW I know tends to be the simpler VW that you noted over my way. I think I'm going to like very much expanding my VW horizons, though perhaps not the opera, based on what you write.

Just as a footnote, last night, I attended a performance by Contemporaneous up at Bard that I thought astounding, including yet another world premiere from a young composer, Conor Brown, whose progress I intend to follow based on what I heard. They closed the concert with Donnacha Dennehy's Grá Agus Bás, new to me, and thrilling to hear them play live. Each time I hear this group, I think, how are they going to top what they did last time, and lo, they always do. I wonder what you would think.

Laurent (and David) - the more I get to know about Churchill the man the less worried I am about the nationalistic myths that have wrapped around him. There's a wonderful moment Jock Colville describes in his diaries when the great man at work absently strokes the Downing Street pet, muttering 'cat, darling'. Many more where that came from.

Allison - thanks. I hope you won't give up on PP altogether; the production made it seem more ponderous than it is.

Sue - yes, Hind does hit the 'rich and strange'. Talking to an orchestral musician, we agreed that if the work got another chance of performance, RH might trim it by, say, ten minutes (I know where I'd cut - near the beginning).

And VW does surprise when he's strange: just listened to Flos Campi, with its bitonal opening for oboe and viola. Wish we had Contemporaneous here: I imagine I'd become quite a groupie. I was charmed by the youth of the Mercury Quartet at King's Place last Monday, playing new works inspired by Debussy (more on that in the blog).

The underground Cabinet War Rooms in Whitehall are a splendid evocation of the atmosphere in WWII. They were untouched for ages and so when opened retained the feel of the time. They have been tidied up a bit now but strongly to be recommended. I mention this as more recently they have swept away a lot of minor rooms and added the Churchill museum. Most interesting - masses of relevant stuff - but I think a bit over-the-top and un-English. He himself had the right idea, to be buried in a country churchyard near Blenheim and not in a great mausoleum as for Napoleon etc

Speaking of Churchill, there's that rather amusing release Dinner with Churchill full of juicy tit bits and gossip amid the horror of it all.

We lost our out-and-proud, the wonderful Stuart Challender, far too early, like so many, that hideous disease took him. What God I ask? There's no interventional deity at work here, not that excludes a Deity.

Well, it seems that Winston has cast RVW in the shade. But I must get that book for the diplo-mate, and in turn recommend again the Jock Colville Diaries.

And Wanderer, of course I agree that there is no divine agency in who stays and who goes. No-one is singled out for preferential treatment and it won't do to say that 'God called him/her early'.

The book "Dinner with Churchill" is OK {I can lend it to you David ] As for Colville, quite good but he was young during the war and the diary of the King's Private Secretary Lascelles is fuller of discussions of central things during hostilities [Ditto]