A Mali without music? 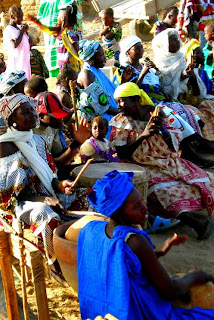 Unthinkable, isn’t it? And yet that would certainly have happened if the Islamist extremists, having taken Konna the other Thursday, had been able to plough on to Bamako. There have been well-reported programmes on the World Service filling us in on the situation in Timbuktu and elsewhere in the north: no sounds of music allowed, not even on the mobile phone. The Festival in the Desert has, of course, been a fatality, though by the sounds of it that had been corrupted from its original Tuareg base to an international event for very well-heeled tourists featuring a lot of crap bands from abroad who wouldn’t have been tolerated anywhere else. Sophie tells me that part of the set-up now reassembles at Segou between Bamako and Djenné. 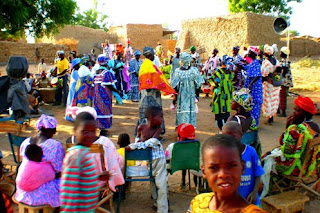 Just how relaxed the music scene in free Mali is can be seen from these photos, which I apologise to those with a long enough memory for repeating from 2009. Yes, women singing, playing and dancing: something not tolerated in Iran or any of the more extreme Muslim states. It only goes to show the easy-going nature of Mali’s sufi-based religion. We caught the good women of Diabolo (not to be confused with Diabaly, much in the news of late) performing for their village when we took a horse-driven excursion with Sophie from nearby Djenné, and they were quite unfazed by our presence, OKd by the local headman. True, they were performing for tourists the following week, but the crust-earning seemed well deserved.

I’ve been listening to the great, late Ali Farka Touré, guitarist-vocalist ‘king of the desert blues’. The booklet for his last solo album, recorded at Bamako’s famous Hotel Mandé by World Circuit , is exemplary (and unusual in the so-called world music scene) in giving us notes by The Man with translations of the songs. I’ve chosen this one about Beto, the river god of neighbouring Niger, because the text is appropriate: ‘Beto, will you share with us this special day of the new year? Yes, Beto, indescribable Beto, Beto, speak, we are listening. Beto, tell us…are the ancients angry?’

The special sound on the next track, Savane, is that of two ngonis, unusual west African stringed instruments.


The famous Basseko Kouyaté is one of the players, and (27/1) was playing at the Barbican last night when I was duty bound to hear Elgar's The Dream of Gerontius over at the Royal Festival Hall; see Howard Male's review on The Arts Desk. The rest of the photos, by the way, obviously aren't mine. 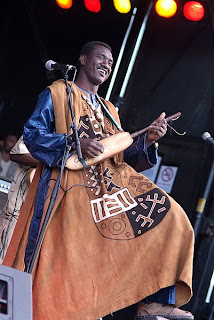 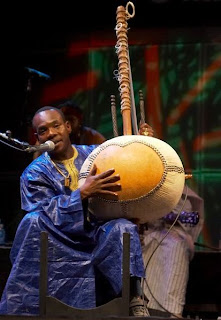 It was, as AFT explained, an unusual conjunction ‘since I am from the Songra/Peul culture in the north and he is a Mande from the south. It’s rare that musicians meet like this from different cultures’.All too familiar contrasts between music’s hand of friendship and more common daily hostilities has just been strikingly illustrated by intelligence well documented by Amnesty and in the Guardian that the Malian army, whose fighters are mostly from the south, has been committing atrocities against the Fulani people of the north.


Anyway, the result of the meeting between guitarist and kora-player is, to our ears, pretty basic – improvisations on two chords in each number – but beguiling thanks to the sonorities of the two instruments. This is 'Monsieur le Maire de Niafunké'*.

Meanwhile the Bach cantata for the week is ‘Meine Seufzer, meiner Tränen’, BWV 13, composed for Leipzig performance in January 1726. The Gospel reading for this second Sunday after Epiphany treats of the Marriage at Cana where Christ miracled water into wine (detail below from Veronese’s vast canvas of the scene; the musician on the left is believed to be a self-portrait). 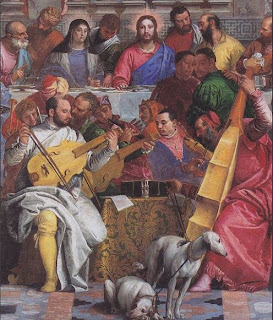 The subject-matter and the prevailing musical mood of Bach's cantata, however, could hardly be further removed from the expected. Only two lines deal with the happening – ‘God can with ease/Turn bitterness into joyful wine’ – and the rest is numberless tears, groaning, the sickness of sorrow, in other words the earthly misery to be transfigured. John Eliot Gardiner writes that in the opening aria only the tone of the oboe da caccia we met two weeks ago, intermediary here between the tenor and the two recorders, softens the dissonances.

The bass lament at the heart of the piece has to be one of the bleakest numbers ever composed (the Germans have a word for it I found applied by Hofmannsthal to Elektra: ‘lichtlösigkeit’ or ‘light-less-ness’). This time the recorders double the violin obbligato at the octave, wraith-like; the soloist only partly fills the chasm between them and the bass line. Even when the central portion of the text speaks of solace and joy, there is hardly a sliver of light. Detail below from Rogier van der Weyden's Deposition. 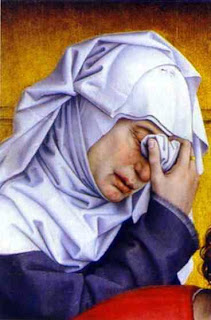 On the other hand, the alto’s earlier chorale, crying out to God in vein, is wreathed in joyful strings, as if to contradict the hopelessness with a promise of better things. Otherwise, this is a stark revelation of the human condition, and I marvelled at Gerald Finley’s restrained performance of the big number in the Gardiner Bach Pilgrimage performance. Once again, there's a slightly less special alternative on YouTube, part of Masaaki Suzuki's Bach Collegium series:

We had extremes of joy and despair in last night’s bumper LPO/Jurowski Strauss concert launching the Southbank’s much-touted The Rest is Noise festival, including a revelation of mighty Richard's death haunted symphonic poem for voice, violin and orchestra Notturno. Read all about it on The Arts Desk - a long review for a very densely packed programme. Ambitious though it was, I got more consistent enjoyment out of the execution in John Adams’s LSO spectacular three days earlier, as recounted here. Much more to come now that the concert season is back on the boil.

*STOP PRESS The ever vigilant Sue Scheid has alerted me to a wonderful video of Mali's great musicians uniting to plead for peace. I can't say I know them all, but if anyone can tell me who's who among the terrific lady vocalists, I'd be grateful. Though Sue has the links below, I'm posting it here for easy access. I believe it's our kora-ist, Toumani Diabaté, kicking off.

I will be back again, as there is (as always) much to ponder and savor here, but wanted to share this with you, which I read about in the New York Times just now (click here; the video is here). Most if not all of the musicians you mention here participated in the creation of the video. As you so vividly demonstrate, to think of these wonderful musicians silenced is impossible to bear. In case the hyperlinks don’t work, here are the web addresses for the article and the video: http://artsbeat.blogs.nytimes.com/2013/01/20/malian-musicians-call-for-peace/ and http://youtu.be/elwA7SHM8_U.

Wonderful, wonderful, Sue: what a carnival of outstanding singers and instrumentalists. Thanks so much for alerting me. I've posted the YouTube version at the foot of the post for easy access, but your links did indeed work.

There is a list of all the singers on this soundcloud link: https://soundcloud.com/world-circuit-records/fatoumata-diawara-and-the

And an article about it here: http://worldmusic.about.com/b/2013/01/19/malian-musicians-collaborate-to-release-mali-ko-a-song-for-peace.htm

No mention of the other musicians except for Toumani Diabate, and Vieux Farka Toure of course.

Ah, that's hugely helpful, many thanks, Howard. In this case it may be the singers rather than the song which (who) really count, but I like it - do you?

What clarity both intellectual and moral was brought to the world by the Enlightenment! Are we still the heirs of that crystalisation of common sense, or indeed still heirs of the Greeks? Much of the world is not. As Voltaire said, those who believe absurdities will commit atrocities.

Your exact meaning, sir? I know that part of the world now known as Mali did not experience our Enlightenment, but the vast majority of its people is peacable and harmonious - as its music bears witness. The trouble has swept down from a north which they would do best to hand over to the non-extremist Tuaregs.

I was referring to the world as a whole - clearly there are areas where rational thought pervades and happy life results, but Voltaire's remark ( originally referring to Christianity I assume) now certainly applies to other religions, to causes and to various nationalisms. The Enlightenment ( and the Greeks) attempted to look for evidence when observing the world and human beings, and to treat the emotions of the heart as part of the problem and not as absolutes. Look at the gun lobby in the States as an instance, as well as the invaders of Mali and their religious brothers all over the world.

Aristotle wrote that the reason for attending tragedies was to purge the emotions with pity and terror, and thus to achieve a catharsis. Those who are not heirs of the Greeks ( or the Enlightenment if I may elide the two a little) do not even see that their emotions need to be purged. And many emotions stem from our evolutionary past ( identifying with one's group for example and hating other groups)and are not at all rational as society evolves.

It's a nice track and was apparently organised by the extraordinary "new girl on the block" Fatoumata Diawara. Although collaboration seems to be very common among African musicians, getting all 40 of them together to do this is quite a feat.

So pleased to have spotted that video, particularly on returning to see to what great use it has been put. Now, I'm finally back to the comment box (and not a moment too soon, as another post has arrived, I see), to say how much I enjoyed your comments on the Bach Cantata under exploration here. I loved particularly your find of 'lichtlösigkeit’ or ‘light-less-ness.' Your choice of accompanying art work for each has been and is here wonderful, too. I've now made a special folder to contain bookmarks of the posts for reference. Though these days I stay mostly in the land of 19th-21st C music, one must, from time to time, go back to Bach.

As I'm for once in front of my computer with speakers hooked up (a rare occurrence these days), I've listened with pleasure to some of your selections as I wrote this and searched for CDs of the Gardiner volumes. (Speaking of CDs, my Jarvi/Strauss CD containing Don Quixote has finally arrived. The order was placed 12/27, if you can imagine.)

Now, before I must again "unplug" from this set-up, I've listened again to the Mali music. That first reminds me strongly of Delta Blues, particularly the way it begins. As for Monsieur le Maire de Niafunké, your comment "beguiling thanks to the sonorities of the two instruments" is exactly right. It’s striking to me, always, to think back how, not so long ago, Sophie was the lone voice we heard here in the west. How especially marvelous, then, to find all these Mali voices prominently distributed in media here, singing for peace. May it come.