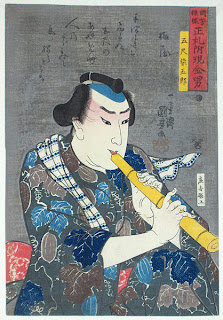 Preparing the students on my City Lit BBC Symphony course for the orchestra's Total Immersion day of Japanese music, who better to ask back than flautist and shakuhachi player Richard Stagg? Some of us last saw him in 2008 when the course was still running at Morley College, and he was about to leave the BBCSO for an independent existence.

From the above, you'll guess if you don't already know that the shakuhachi is not a type of mushroom (thanks, Fiona M) but the Japanese bamboo flute with a haunting sound all its own; the name actually means '1 foot 8' in Japanese imperial measurement. So Richard brought along not only a couple of shakuhachis - many of which he now makes himself from a special kind of bamboo that grows in the mountains outside the major cities - but also specimens of 2 ft 2 and 2 ft 4, equating to our alto flute.

But then I think even the basic instrument sounds rather alto-fluty in its hollow, whispering lower register. Watching Richard in action was fascinating: as there are only five holes, and the shakuhachi has a range of two octaves, pitch and chromatics, including quarter-tones, can be changed by the angle of the head - up or down, while more discreet side to side gives the degree of vibrato. Embouchure can change pitch and tone, and it's a devil to master the end-blown technique (Richard says his fledgling pupils have good days and bad, when barely a sound will come out). The bore has to be specially shaped in the making or the scale won't function.

The repertoire dates back to the monks of the 9th century, especially the mendicants with their begging bowls (one tune is called '1,2,3, return the bowl'), but having been passed down by oral tradition was only notated between the 17th and 19th centuries. Kurosawa Kinko is the big name among collectors. Most of the pieces Richard played were extremely free, with vivid trills and slide, though 'Kumoi Jishi', the 'Heavenly Lion Dance', was loosely in 6/8. 'Rokudan' comprises the six steps of the title, each 27 bars long; it cropped up again in the Okeanos concert yesterday. The scales can vary, but the shakuhachi has to adapt itself to the Japanese pentatonic scale favoured by stringed instruments and singers. Here's a track played by the man Richard says is the great shakuhachi master, Kifu Mitsuhashi, whom I had to miss on Saturday evening.


The shakuhachi sounds wonderful alone, but the Yamato Ensemble with which Richard plays also includes the thirteen-stringed koto, something like a zither, which comes in different sizes, 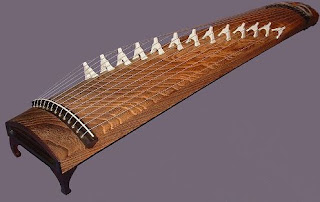 and the three-stringed shamisen played with a plectrum.


Both players would traditionally sing along and in the first track on the disc which I needed no encouragement to buy at the end of the session, I was struck by how the shakuhachi, weaving around the voice as well as joining it, behaves like the obbligato instrument in a Bach cantata (only connect below). Here's a track from another of the Yamato Ensemble's CDs.


As I was down to cover the opening night of the English National Opera Traviata for The Arts Desk yesterday, I only managed to get to the late afternoon event in the 'Total Immersion' day. Presentation was rather lugubrious at first: the rather reserved (British) members of the extraordinary group Okeanos included two rather introverted seeming balding guys with specs, and there were no introductions to the traditional sequence. Then they played to their strengths, the creation of contemporary repertoire. Four of Dai Fujikura's Okeanos pieces, although they were more about sound than substance, brought out the best in the strange meetings, dominated by the hainting sound of the shō, best described as a 'free reed instrument' made up of seventeen pipes - a kind of portable organ. 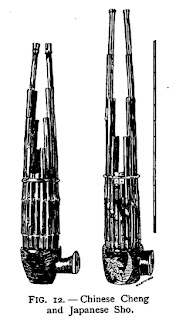 Fujikura's Cutting Sky, a dialogue between plucked viola and koto, riveted in the hands of Bridget Carey  and Melissa Holding, who later gave a dazzling cadenza. That was in a haunting stretch of improvisation drawing in our friends Anna Smith and Mike Atkinson from the BBCSO and students from the Guildhall School of Music and Drama (Maaike van der Linde astounding on bass flute). It was a very crepuscular hour and twenty minutes among the serious-minded in the Barbican Hall, but I treasured it all the more when thrown into the hurly-burly of elbowing first nighters at Traviata later. Anyway, if you want an ideal introduction to old and new Japanese music I can't recommend too strongly this disc with ideal annotations by Makoto Hasegawa and Richard. Not difficult to guess that he's the second player from the right. 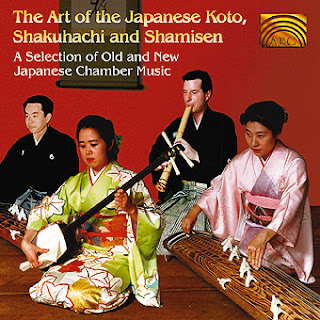 Back on terra firma, I decided to build on last week's mistake and listen to two Bach cantatas today: one to cover the fourth Sunday after Epiphany, for who knows when that will happen again (I bet someone does, but please don't bother to let me know), and one for Sexagesima. The first, 'Jesus schläft, was soll ich hoffen?', BWV 14, was written for Leipzig in 1724; Bach was not to compose another Sexagesima offering for a decade. I agree, again, with John Eliot Gardiner's notes for his Bach Cantata Pilgrimage, the best possible guide: this is as operatic a response to Jesus's calming of a Galilee storm (the New testament reading for the day) as it would possible to imagine. Illustration wise, we could have more Backhuizen after Tuesday, but let's turn to Delacroix. 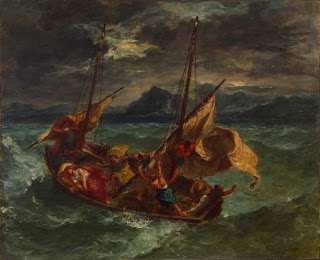 The opening is a plaintive lament for alto with lacerating minor-second keenings from the strings and recorders poised rather gently above. Quite a challenge for the soloist, this, twice asked to hold a low B flat for ten slow beats as he or she sees 'with ashen countenance death's abyss gaping wide'. Countertenor William Towers on the surely unsurpassable Gardiner recording manages it to perfection. A dissonant tenor recitative sustains the mood of humanity lost without Christ's guidance; then the storm breaks in rushing violin waves, freeze-framing on the tenor survivor.

The bass takes on the role of the reassuring Christ, almost placid in an arioso before more surges (strings in octaves) meet his greater authority in a number bringing back the beloved oboes d'amore. From the quiescent end to the closing chorale all is calm assurance. The elemental music, though, outdoes even the buffets of the Septuagesima spectacular I covered on Tuesday. Let's have Sigiswald Kuijken's La Petite Bande on YouTube for a change.


'Erhalt uns, Herr, bei deinem Wort', BWV 126, for Sexagesima Sunday 1725, has a militant hymn text kicked off by Luther who asks the Lord to 'deflect the murderous intent of Popes and Turks' - no wonder when I looked up this cantata on YouTube, the entries were led by Evangelical films. The malign elements are, I suppose, related to the bad seeds in this Sunday's Parable of the Sower, seen below left in Brueghel the Elder's great landscape. 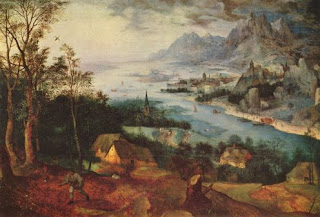 The chorale text runs through the cantata, as in Tuesday's choice, heard as before in the sopranos in the trumpet-capped opening chorus and punctuating an original recitative-chorale in which alto and tenor take it in turns to comment on Luther's lines, which they both sing. Both the tenor and bass arias have surprising elaborations in their middle sequences (the tenor's on 'erfreuen' and 'zerstreuen', the bass's on 'verschlingen', to make the battle against the adversaries all the more emphatic). The inspiration I've been singing round the house is the bass's number, with the continuo rushing down the scale before dropping an octave and trying, Sisyphus-like, to clamber up again - totally appropriate illustration of 'bombastic pride' falling to earth to be swallowed up by the abyss. Curious, too, the irregular line-setting of the final chorale with its elaborate Amen. Here's Harnoncourt with some quality voices in tow.


Next week I promise a few digressions from purely musical themes. It's got a bit inward-looking, I know, and some folk don't like that. But the kind of blog I prefer is where one writes as one wants, not what one thinks an audience wants to hear.
Posted by David at 16:29

I made 2 trips to Japan in my life and have always found that country to be like a dream. I do not know if I could live there for any length of time, say a few years, but found the Japanese people delightful. Some much to discover and enjoy. Mind you I was coming from China at the time which I did not like much. Yes I encourage you to blog as you please, a blog after all is a personal journal.

Indeed, Laurent. I can't wait to visit our delightful friends Yumi and Ladislaw and ther children, who recently moved from London to the north island.

I also remember my much-missed late student Elaine Bromwich, who carried on coming to my opera classes in her mid-nineties, saying how welcome she felt when at the age of 92 she stopped over on her own for a week in Japan on the way to see her daughter's family in New Zealand.

You call to mind my introduction to indigenous Chinese instruments in Wales. They so enrich one's musical vocabulary, don't they? How wonderful to see and hear this flute played "up close and personal." This morning I was able to have a good listen to the Shakuhachi selections and your latest installments of the Cantata. It was to be an aggravating day, and this set me up to get through it with something like aplomb. I must report as well that we are now in possession of the Moro cookbook. A beautiful thing it is, so thank you, too, for that.

I'm glad there was nourishment there - Bach especially sets one up for anything the world may throw at one, I reckon. Didn't know you were intending to invest in Moro I after my garlic soup eulogy, but I know you won't regret it. It's beautifully produced, for a start, as every durable cookbook should be.

I've been running to stand still and I've not yet caught up with hearing your Bach Cantatas nor the Total Immersion Day which I was looking forward to.

In the spirit of Danny Baker's BBC4 vinyl celebration, my very first classical music purchase in about 1972 was a double album of Stravinsky ballets (Firebird, Rite and Petrushka) which as its fourth side had Takemitsu's November Steps. I loved it and have been a fan ever since. Amazing that the name of the ethereal shakuhachi has such a prosaic meaning!

Howard, I must find out when Radio 3 intends to broadcast what of the Total Immersion day. All it said in the programme was that certain concerts would turn up on Late Junction or Afternoon Concert at some point. In the meantime, I do recommend that 'The Art of...' disc as a perfect Japanese compilation of old and new.

Strange but rather inspired, the addition of Takemitsu to the Stravinsky ballets. For the first LP I bought with my own pocket money, I wavered between the Firebird Suite (coupled with I remember not what), because although at the age of seven I'd never heard any Stravinsky other than a bit of Petrushka on a Disney 'Introduction to the Great Ballets' record, I liked the photo of Margot Fonteyn flaming on the cover. In the end the parents advised Scheherazade conducted by Kletzki, because I knew the music.