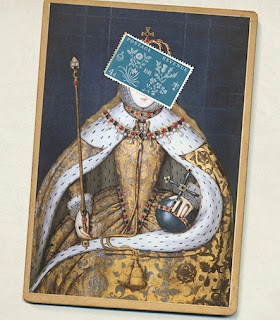 Seven Monday afternoons on Britten's Gloriana were much longer than I'd anticipated for our Opera in Focus chunk at the City Lit.  It's the only major Britten opera other than Owen Wingrave and the three church parables which I hadn't previously examined in detail - Paul Bunyan should go in to that list too, I reckon, since it's a great work we looked at a fair bit in passing - and it comes as no surprise to have found his coronation opera the unmistakeable work of a genius, professional throughout and sometimes inspired.

Richard Jones is coming to talk to us about his production at the Royal Opera, already seen in Hamburg; I love the logo above which promises us much about our own queen's coronation, as well as heaps of cod (and I hope real) Tudory. Strange but true: Jones was born one day before the world premiere on 8 June 1953. Boy, does he have his work cut out, though, given one of the most unforgettable productions of recent years. Not English National Opera's, which introduced so many of us to the opera. 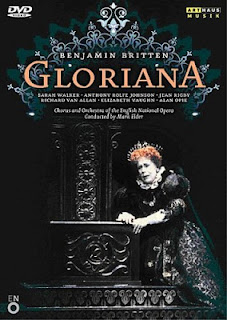 Sarah Walker is magnificent, and has plenty of amplitude for the heroic-sopranoid nodal points, but she's marooned in a frigid Colin Graham production. 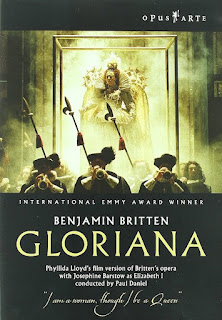 Phyllida Lloyd's selective cinematic adaptation of her Opera North production, on the other hand, turns out to be up there with Bergman's Magic Flute as one of the two best opera films I've seen. Chief reason being the camera's unrelenting focus on the kind of performance which, as Tom Randle says in interview, comes along ever 100 years: Dame Jo Barstow IS Elizabeth, just as Callas WAS Tosca, and Gheorghiu, at least close to the start of her career, WAS Violetta. I saw the production when it came to Covent Garden and was impressed, but nowhere near as much as now. 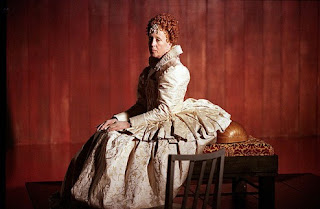 The voice is never beautiful, and more grating than it was on the superlative Mackerras recording* - what a Best of British, from late, much lamented Langridge down to Terfel's Cuffe and Janice Watson's Lady in Waiting - but that's not the point. Yes, this is the very definition of Great Singing Actress, up there with Anja Silja in Janacek.

OK, so you lose the Norwich masque with the mixed blessing of the choral dances, the love duet/conspiracy scene by the Thames and nearly all of the odd rebellion-in-London fiasco, but of those I can only truly regret the absence of the brilliantly concise interplay between Mountjoy, Penelope Rich and the Essexes. 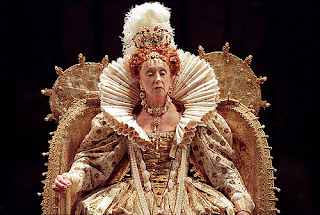 I said yesterday that I was reluctant to use the overworked word 'iconic' with regard to Barstow's queen, but as student Jane pointed out, an icon was what Elizabeth and her advisers set out to create, and what a legacy of portraits we have as a result. My favourite is the dress with eyes and mouths at Hatfield House, which fits with the time of the Essex crisis (1600-1). 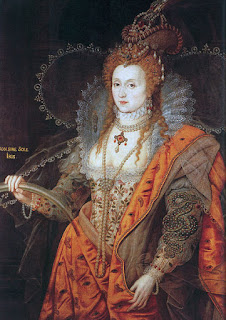 The point of the drama, of course, is that we see behind the projected image as the fault-line between duty and feelings swallows up the once-proud Elizabeth. I'd select as great cinema the mask-like image Barstow projects when the Queen, as really happened, encountered a muddy Essex, straight from Irish failure, in her bedchamber without her wig. And there are no ends to the depths Barstow and Lloyd plumb in the final scene; this is a face which can convey several emotions at once.

Lloyd's handling of the last rites is worthy of a scenario which at last joins hands with Billy Budd before it and The Turn of the Screw shortly after (Gloriana as Vere anguishing over the death-sentence, and later as the Governess bringing back the key tune - 'Malo' there, the Second Lute Song here). I wasn't convinced by the backstage layer of the film at first, but it pays off in the later scenes, and above all at the end. Get the DVD, watch it over and over again. 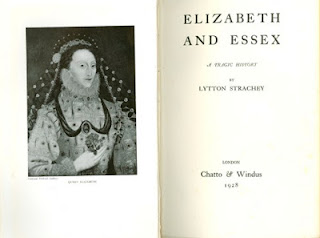 Of course, without the great Lytton Strachey's sometimes hilarious, often poetic Freudian study Elizabeth and Essex, Britten might not have gone so deep in Elizabeth's second encounter with Essex, a tense and dark counterpoint to the first; both are among his greatest operatic scenes. Strachey reasonably points out that much of Elizabeth's trouble may have stemmed from the fact that 'when she was two years and eight months old, her father cut off her mother's head.' Is it surprising if she developed a Turandot complex as a result?

At any rate the conflict of her 'ambiguous nature' with the impetuous, ambitious one of Essex (pictured above by the fabulous Hilliard), her habit when faced with his outbursts of 'relenting as unpleasantly [and as tantalisingly slowly] as possible', could only end in disaster, goading him, as one courtier put it, 'from sorrow and repentance to rage and rebellion'. Further enlightenment comes from Anna Whitelock's pithy new Elizabeth's Bedfellows, with its keen selection of flavoursome quotations. I've read the last five chapters; now I need to go back to the beginning. 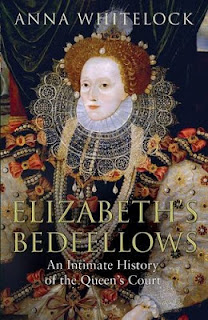 Britten the musical dramatist captures the power-play as nakedly as his selective use of the orchestra could possibly allow, and to be fair William Plomer's libretto often goes straght to the nub of the matter. Every prelude to every scene is a masterpiece of orchestral colour, reprised to the action on curtain-up. I just wonder if he had to be quite so rigid with his alternation of public and private; after all, the former intrudes into the latter by steady degrees, and vice versa in the superb ball scene, so that maybe we could, as Lloyd in fact does in her film, do without the progress and rebellion scenes. But let's see how Jones handles them.

*I was there in Swansea's Brangwyn Hall in October 1992 to report on the sessions for Gramophone. I remember a wonderful time with Mackerras, though the casually homophobic jokes during playbacks were a bit off-colour, a reminder of why 'Charlie' became one of Ben and Peter's 'corpses'. Alas, I can only find the first page of the session report among my archives, and Gramophone's online resources are now hidden behind a paywall.
Posted by David at 11:05

David! I just went back to see, and I have now, just from your recent posts, 7 books added to my amazon wish list and 2 DVDs cued up (forgive me, but they're on Netflix). I'm impossibly behind--and this doesn't even count in the projects of my own I have on queue. What am I to do? (PS: Thank you so much for the offer to pick up the Poulenc letters; I think I'll first try and get it here on interlibrary loan at some point.)

I had absolutely no idea this opera existed, nor the Strachey text (I loved Eminent Victorians). So now, here's something that will make your toes curl, but I have to say it: City Lit deserves to be more widely available, and one way to do that is through the newfangled MOOC. I'll say nothing more on the matter, other than that I'm so, so envious of your students. Still, there's that wonderful Glyndebourne podcast on Ariadne, and I hope more such things to come.

I've had such an aggravating day today with a project of my own I've been longing to get to and instead was thwarted with constant interruptions in the form of phone calls and logistical matters, which is just to say it's therefore a particular pleasure to visit here and get a bit of sustenance.

Glad to hear that you were at those Swansea sessions. You won't remember me, but I was one of the trebles singing 'Now rouse up all the city'.

Sue - remember: you can eat an elephant in bite-sized chunks (J's advice to me when deep in the middle of Vol 1 and no end in sight).

I must investigate MOOC, having come across your earlier mentions of it.

Glad to be of consolation. So much to report, not least our time with wanderer and his man. We got on famously, of course, and toasted you two more than once. Schwanewilms was the Singer on a Higher Plane we know her to be; tears would not stop at the end of Rosenkav Act One. German cities seem so relaxed in midsummer: Dresden - ah, the new museums! - as well as Berlin. More anon.

Gavin - I can only sigh a 'Ja, ja' like the Marschallin at your reminder of the gulf between generations...lucky you to be on such a total gem of a recording. It seems even more precious to me now Langridge is no more.

Excellent advice it is, too! (Right now I'm steeped in reading about another composer whose name begins with P, enjoying it too much to set it aside, but the time will come.) Cannot wait, of course, to hear your reports on the trip, and so glad to know that the floods didn't get in your way. I am glad I'll get a chance to hear Schwanewilms in Die Frau ohne schatten, at least!

Yes, the floods had quickly subsided though the sets for Rosenkav had not been transported. Probably the relief accounted for the exceptionally serene mood of students all drinking by the Elbe on a perfect summer's evening.

So you got hold of the Poulenc letters. Merveilleux!

So you saw Rosenkav sans sets? As for Poulenc, no, alas, I haven't got the letters as of yet, but I am going to try to do it through interlibrary loan. The "P" to which I was referring was Prokofiev, as you by now may have deduced!

Yes, or rather with an odd back wall of globe lamps above, rather primitive looking cupboardy doors below through which the Marschallin had to make several rather undignified entries and exits. But more on this in the next post.

'P' No. 1 - of course. I hadn't read your excellent post when I surmised wrongly.