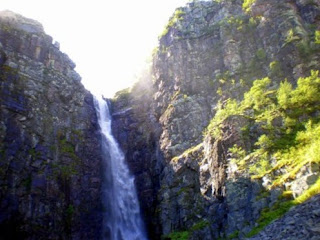 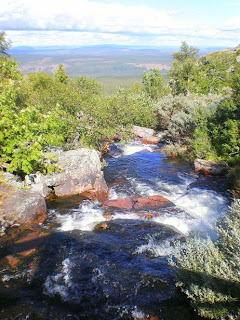 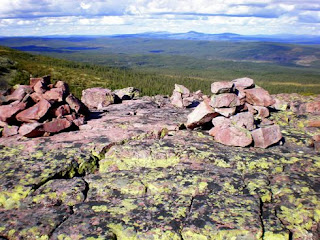 We've been tramping relative flatlands more recently, though the terrain of our Norfolk churches chronicle which will still take me some time to assemble did lead us into modest valleys. Nothing, of course, compared to the canyon of  the Njupeskär waterfall and the river Njupån in Sweden's Fulufjället National Park, not far from the Norwegian border in what I suppose, technically speaking, is still Dalarna. Visions of our walk up to and above the waterfall kept me sane during nearly two hours of hideous, if painless, root canal treatment on Wednesday.

This is Sweden's highest cascade, topping 93 metres with a freefall of 70. It flows from the Rörsjo lakes on the c.900m high mountain plateau, which with its 900 million year old sandstone and diabase has been eroded for the past 200 million and kept more or less its current shape for 60 million. These are figures I can't really get my head around; one needs a book like Christopher Potter's You Are Here to put it all into perspective. Nor do I quite understand the principle of 'retrogressive erosion', but that's why we have the waterfall, its boulders and its canyon.

The first two kilometres from the visitors' centre, with its excellent Naturum, are accomplished by even the most timid or toddler-encumbered of visitors and take you past 400 year old larches and sparkling lakelets 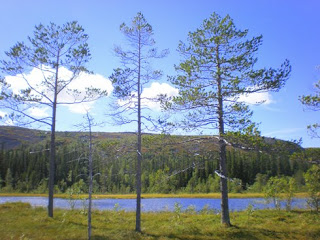 along a boardwark near to the base of the waterfall. The sun only hits the cascades for a couple of early morning hours in midsummer. 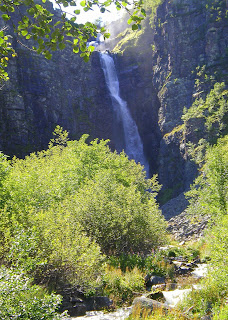 Jamie coped with the spray and the boulders more nimbly than I did, so has the best shots close up. 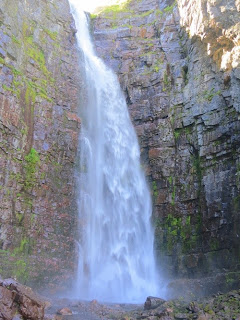 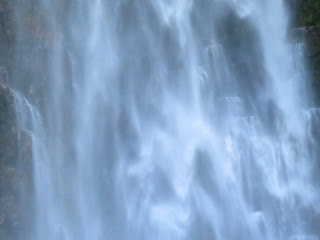 We then retraced some of our steps and climbed towards Rörsjöarna 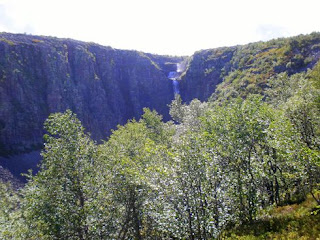 with the views north-east opening up all the time and the boulders covered with bright-green map lichen. 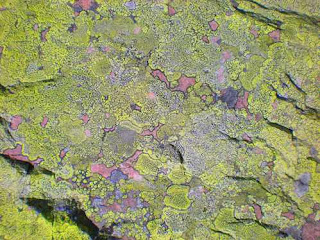 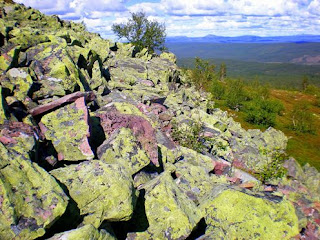 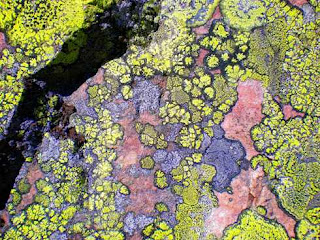 Clouds were rolling in and the wind strengthening, so we stopped for our packed lunch in a sheltered nest of rocks before pressing on for the plateau (third of Jamie's four pics). 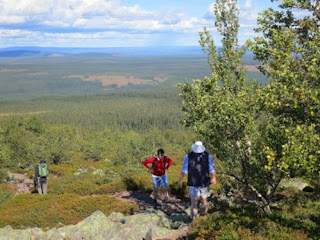 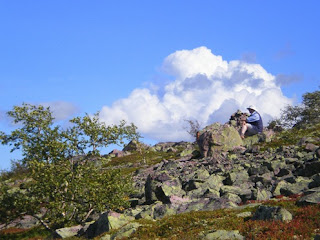 while I clambered nearer to the upper falls 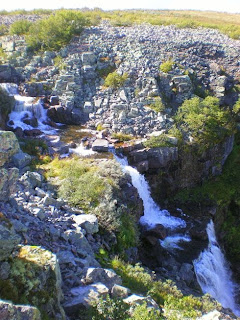 and Jamie once again got closer than the rest of us to view the cascade proper from above. 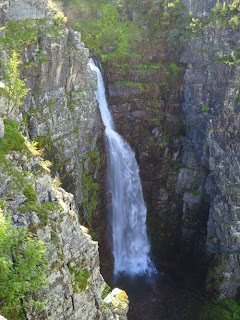 The Fulufjälllet plateau is famously unique in remaining ungrazed by reindeer, so the lichen called reindeer moss grows in thick carpets. 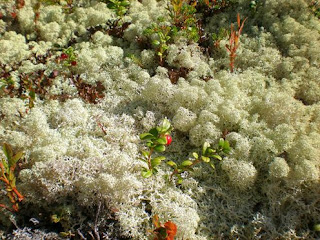 The terrain is also covered in dwarf birch and mountain heather 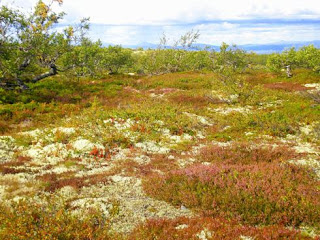 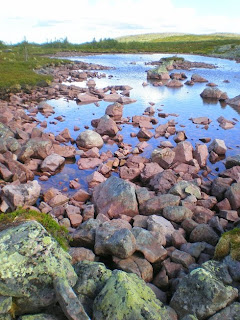 One so wants to think of this sky-neighbour where mind-chains do not clank as untainted, but I read that due to acid rain the fish in the high lakes died out in the 1950s. Nowhere is quite safe from human fallout.

I'd like to have spent more time roaming the uplands, but by now it was late afternoon and we wound round the other side of the high ground above Njupeskär. 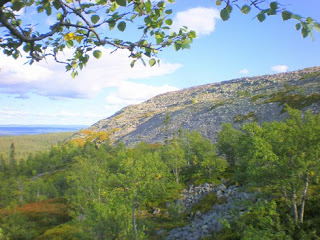 This is where I found my cloudberries. Indulge one more shot, with moss more in focus than my artfully sited discovery (not by any means the only one, but the most cumulus-like). 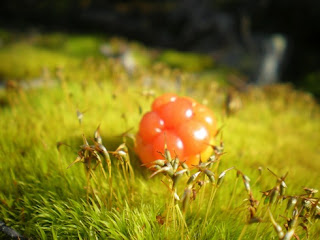 Back down we headed towards the waterfall zone, with lichened trees in profusion. 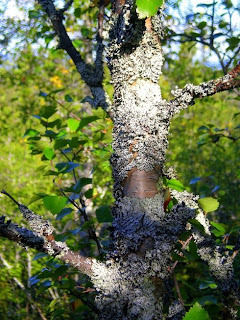 Here I had my first glimpse of the miniature fungi world - Roger Phillips' beautifully produced volume Mushrooms, a copy of which I'm now proud to own, suggests to me that the tallest specimens here might be Mycenae/bonnets, but then again they might be Hygrocybes/waxcaps - 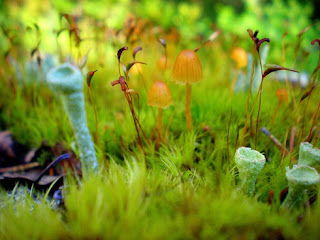 which would give way to spectacular larger specimens on our walk the following day. To which, of course, I'll return, as it was a whole new landscape.
Posted by David at 15:00

How utterly lovely this all is, the grand and the small. I love your close-ups of the lichen/cloudberry and the mushrooms. Such magical miniature worlds they make. I remember my Mom taking us as Girl Scouts out on nature walks--she was always pointing to these funny little things close to the ground. We didn't know what to make of it then, but somehow it instills a way to look that comes to the fore later on.

My favourites too, Sue. My parents were, alas, not nature observant but they did take me to beautiful local places - as Kenneth Clark writes somewhere, there's nothing that unites all people more than the love of a good view.

Even so, though I'm trying to make up for lost time, I wish I'd been trained in the details of nature. May have written this before, but in my next life - figuratively speaking, 'cos I don't believe in reincarnation - I'd like to come back as a geologist or a botanist.

Why do we find nature like this beautiful? Darwin (Voyage of the Beagle, 29th February 1832) wrote " Delight....is a weak term to express the feelings of a naturalist who , for the first time, has wandered by himself in a Brazilian forest. The elegance of the grasses, ....the beauty of the flowers, the glossy green of the foliage. but above all the general luxuriance of the vegetation, filled me with admiration." But he was then a deist, even a Christian, Later he saw that the beauty of the forests was no more than the result of evolution from primitive life forms. And whereas one can easily construct a case for finding beauty in the creations of a God who has also created us, why should we find beauty in the results of chance? I believe Darwin commented on an aspect of this but cannot find the reference
Well, better set aside such philosophical enquiries and admire the beauty that manifests itself, for whatever reason

That's precisely why Darwin is my all-time hero. His double consciousness allowed him to see the brutal struggle of nature in its birth, copulation and death (to which one might add the struggle for food), and yet revelled in the beauty of the results much as you describe. He also, with substantial qualifications on suffering, found the 'arrangement of the world...generally beneficial', and wondered how that might be accounted for.

All this is in a wonderful section of his Recollections called 'Religious belief'. Again, as a kind of fridge magnet to self, I quote: 'I feel compelled to look to a First Cause having an intelligent mind in some degree analogous to that of man; & I deserve to be called a Theist'. At the end of the same paragraph, 'The mystery of the beginning of all things is insoluble by us; & I for one must be content to remain an Agnostic'. The big bang theory does nothing to change all that for me.

Also, one might bear in mind the remarks of the atheist Martin (Lord) Rees ( former Master of Trinity Cambridge, Past President of the Royal Society etc etc)when he said that the human mind seems to be hard-wired for religion. That does not mean ( I would add) that one has to be a believer, but it does mean that however much intellectually one is drawn to the atheistic position one should never overlook the fact that the mind is constructed to an extent otherwise. I think Dawkins makes that mistake. Darwin having been brought up in an environment of faith ( he thought of reading for the church at one point) would have worked within that kind of environment, though not seeing the matter, perhaps, as explicitly as Rees.

The Church of Rome has said that Big Bang is perfectly compatible with the Christian Revelation. And even in the 19th Century (1881) it was argued by the (Roman) Bishop of Clifton that that the first chapters of Genesis were a "Sacred Hymn" not to be seen as literally true

As far as I can see it was above all food ( the limits to what food can be available to a species) that led Darwin to the idea of Natural Selection. And he got that idea from Malthus. Malthus has (not yet) been proved right about the limitation of food supplies leading to a problem for the human race......but his influence on Darwin was crucial to Darwin's explanation of how evolution works