I'm glad I read two medieval romances in the 'wrong' historical order - Wolfram von Eschenbach's Parzival first, and then the unfinished work to which he was so much indebted, Chrétien de Troyes' Story of the Grail. Wagner must have known about the latter when he worked on his Parsifal, but he only rails against the former, chiefly in that key letter to Mathilde Wesendonck of 30 May 1859 where he bewails the hopelessness of defining Anfortas' agony - later he used the alternative 'Amfortas' and shifted the stress to the second syllable - in operatic terms.

He sees Wolfram as a kind of unholy fool who has 'understood absolutely nothing' about what he writes: 'he tacks one event on to the next, one adventure to another, links together the Grail motif with all manner of strange and curious episodes and images, gropes around and leaves any serious reader wondering whatever his intention can have been?' Surely to tell a good yarn, but to over-embroider it with -as I've already remarked in the first Parsifal instalment - the kind of silly chivalric names Cervantes spoofs in Don Quixote, to jump all around a very peculiarly mapped world and to weigh down Parzival with an over-long back history. 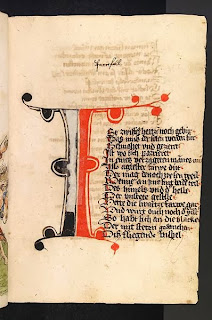 What a relief it was, then, to turn back a decade or so - we know Chrétien's version must have appeared shortly after the death of Henri the Liberal in 1181, when Philip of Alsace, Count of Flanders became his patron, and before Philip's death on crusade in 1191 - and find a master storyteller who always gets straight to the point.

Here we bypass Wolfram's first two chapters on the ludicrous Middle Eastern cavortings of Parzival's father Gahmuret, which will give the son a mottled half-brother, Feirefiz. With Chrétien we immediately enter the Welsh Waste Forest in Spring where Parzifal's mother - she has no name here, but becomes 'Herezloyde', 'Heart's Suffering', in Wolfram - brings him up in ignorance of the knightly code which killed his two brothers and broke his father's heart (this dad is not a fighter but an exiled noble). 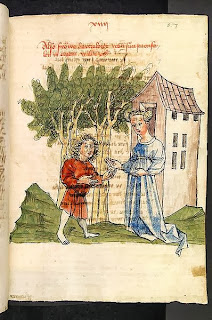 Of course he meets five armed knights who seem to him like God and angels, has an amusing conversation at cross purposes with them and, enlightened, become adventure-bent.

If Chrétien hadn't got there first, you'd think his ironic comments about not wasting time on describing combats, tourneys and endless banquets were a reproach to Wolfram, who bores on about them at length (he's also obsessed with fine fabrics). In both, the code of mercy to conquered enemies and gallantry to damsels in distress or otherwise is a rather charming one bearing in mind the harsh world in which both narrators lived. 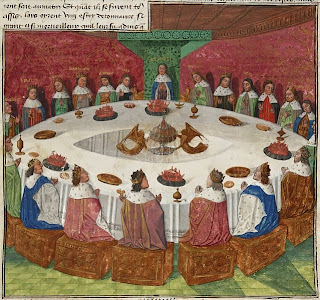 Curious that Wolfram should see the Grail as a kind of magic stone which feeds the hungry. Chrétien suggests it's a goblet of 'fine pure gold' set with costly precious stones, companion to a white lance from which a drop of blood flows. The significance of both we never learn, of course, since Chrétien presumably died before finishing his story. You curse the diversion of Gawain's adventures, well told though they are, without which Chrétien might have got to the point of Perceval's quest. As it is, we only enjoy a little further enlightenment from Perceval's hermit uncle between Gawain episodes before the main knight is lost from sight. 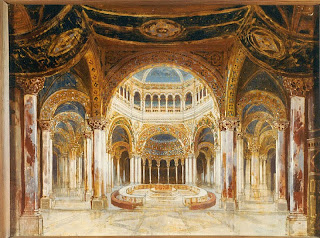 At the conclusion of our first five two-hour Opera in Focus classes on Parsifal at the City Lit, we've at last reached the end of Wagner's first act (Paul Joukowsky's design for the first Bayreuth production above). Three performances leapt out for the students and/or myself. First was the minute, snippeting Gurnemanz's narrative, we changed from René Pape for Gergiev to Hans Hotter, past his prime but still a voice like no other in the celebrated Knappersbusch 1962 Bayreuth classic. Second happened to be my own personal thrall to José van Dam, innately noble as Amfortas in agony for Barenboim. Third was when we watched the whole grail ceremony sequence in Hans Hollmann's Zurich production on DVD.

I chose this, after earlier scenes from Lehnhoff, for two reasons. Haitink is still the ideal Parsifal conductor for me, unhurried but completely natural. And I'd been so impressed with Michael Volle, surprising star of the Royal Opera Vêpres Siciliennes, that I wanted to see how he'd handle Amfortas. We were not disappointed. The production's simplicity is ideal, beautifully lit and still allowing for an astonishing image when the monolith 'grail' rises and Amfortas, behind it, extends his hands either side in a pool of brilliance to form a Christ on the cross image. 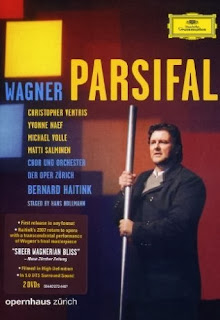 Hollmann speaks sense in a simple sentence: 'Wagner presents only possibilities - Parsifal can never be wholly fathomed by interpretation.' I don't see that the dodgy, proto-Nazi issue of the 'pure blood' need come into the picture at all so long as you focus on the human suffering symbolised by Amfortas's bleeding wound. Anyone who has tended a dying person or been seriously ill can understand that desperate need for transcendence in the midst of exteme pain. So far, so human. Next: more on the bells.
Posted by David at 12:27

Good thing that you are staying away from the Nazi theme in Wagner's Opera. If the Nazi had never existed I think we would have had to invent them. It is so tedious that people think it is necessary to always bring that up. Wagner did live and die well before any evil ideology came about (1813-1883). I agree that old medieval stories were the source if maybe the only source for Wagner's inspiration and his work should be seen in that context. A work of the romantic age.

I think the real sticking-point, Laurent, is Wagner's violently anti-semitic essay writing (plus the dreadful kerfuffle about Jewish conductor Hermann Levi only conducting the Parsifal premiere because he came as part of a Munich package against the composer's will).

There are of course passages and characters in the operas which you MIGHT argue as anti-semitic, but can equally well be characterised as nasty pieces of work (Mime, Beckmesser). I don't find a single scrap of text in them, though, which would support that argument. As for the Nazis, if they are anywhere in Wagner, they are the Gibichungs (and arguably Alberich) in The Ring.

As for romantic, doesn't Parsifal go beyond all that, a kind of endgame for all time? Shame about the flat apotheosis, but apart from that it's a drama of faith as powerful as any of Bergman's.

I admire the way you dive in so deeply when you undertake something, as here with Parsifal. I've only seen the one production, at the Met last year, so it's hard for me to say too much, but I have the sense we were lucky in the cast and production. Peter Mattei's Amfortas is what I remember as most affecting, and it does seem that had he not carried the part as well as he did, the opera would have had a big hole in it. As for the Wagner back story, as in so many other things, the music and the man just have to be dealt with separately as much as possible. He's not high on my hit parade of admirable people (and this is setting the Nazi issue aside, for, as Laurent notes, that happened later), but he was a genius and his impact on music that came after him was vast.

That Amfortas scene is so crucial in casting and production, isn't it? For it's precisely at that stage in Act One that one can think, oh, just get the ritual over with, if the singer isn't compelling (and at the Proms, Eike Wilm Schulte was a fine actor but way too small a voice). Yet a production like the Zurich one and singers like the great Mattei or Volle can make it seem the absolute crux (in more ways than one) as Wagner wanted it to be.

I can never tally the crude polemicist and manipulative human being that Wagner undoubtedly was with the broad humanity of Meistersinger (yes, yes, I know, 'heilige Deutsche kunst', but even that can be made to work) and Parsifal. Nike Wagner has wise words on the polarities of Bayreuth in the first chapter of her excellent book on the family, and I want to bring those up in the next Wagner post.

There have been over the centuries in many countries various levels of anti-semitism, some very serious. But imposing later viewpoints and knowledge ( when analysing this or any historical question) on earlier years is one of the faults in many commentators. One should not jump from Wagner to the Holocaust, which would not have happened without Adolf Hitler, who would have acted as he did even if Wagner had never existed. One further problem in discussions in this area is that Hitler ( unlike others such as Stalin)is a figure giving rise to such emotions that a calm analysis is difficult, even impossible. The other day the BBC programme on the Vienna Phil had two discussants whose voices dropped to a "this is horror" level when it was mentioned that it was Goebbels who had had the idea of the orchestra's New Year Concert.

Very balanced, Sir David. But you still maintain, I think, that Wagner is 'intrinsically evil', as does my colleague and pal Igor. I still don't see evidence of that in the works themselves.

His spell is dangerous, no doubt of that, and Thomas Mann expressed its full ambiguity brilliantly. But in my old age I'm less susceptible to the irrational excitements and more prone to tune in to the genuine spirituality, which is why I love Parsifal ever more.

David, you are entre deux ages, which is younger than the English concept of middle aged

Thomas Mann ( in February 1933) praised Wagner as among the greatest of artistic figures but added "It is thoroughly inadmissable to ascribe a contemporary meaning to Wagner's nationalist gestures and speeches. To do so is to falsify and abuse them, to sully their Romantic purity" This comment produced a climate so vicious that Mann was forced into exile.

What a beautiful world view is displayed in the lovely ancient pictures,at the same time bright and restrained, and how degenerate the 19th century set at Bayreuth.

I disagree about the "set" at Bayreuth !! They had intelligent dogs that listened to All of "Si
gfreid". My tortoise was brought to Parsifal ,he felt that the pace of the performance was a little too adagio" that evening.
But we all agree Mr Nice is most splendid !!! He should be given all the damasksandsiks from Ludwig II. Liam

Liam, you can be so enigmatic. What did I say that you disagreed with? I am a little better informed about the post-Wagner Wagners now, having finished Nike's excellent and - in the family saga section - racy book.

The tortoise comment especially intrigues me. Could you kindly footnote?