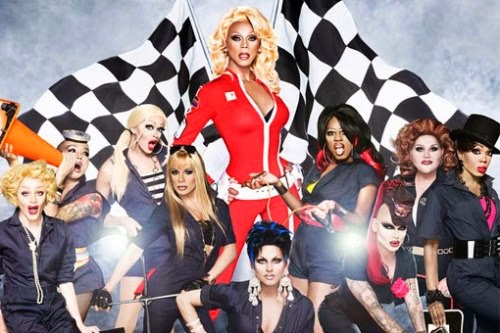 Never thought I'd use that headline, at least not until I got hooked on RuPaul's Drag Race. The diplomate was sick in bed one weekend and turned to Netflix for comfort viewing. I only had to see a couple of minutes to know that this was better than daft: a game show in which queens from all over North and Central America compete for the drag crown. The path has led from watching all the series to buying a couple of tickets to see the Series Five winner Jinkx Monsoon, a self-styled Jewish narcolept from Portland, Oregon, in action at Camden's Black Cap Club. This was the consequence of re-bonding with lovely goddaughter Rosie May, studying theatre design at Central, who's good friends with hostess Meth and was amazed when, at the end of a dim sum lunch at our Soho regular, the Joy King Lau, we brought up her favourite programme. 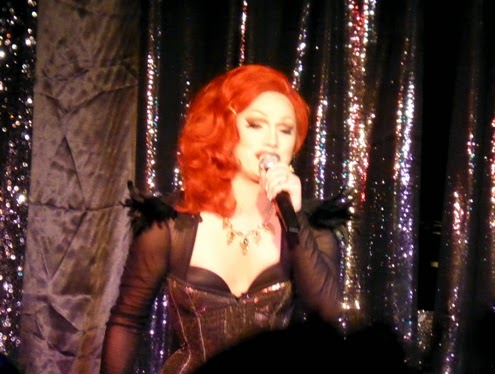 RuPaul's Drag Race is in turn inspired by the seminal documentary about the drag balls of 1970s New York, Paris is Burning. When I first saw the film a couple of decades ago I warmed to the wit and wisdom of the participations. Watching again, I found it achingly sad: the resilience and creativity still blaze through, but how circumscribed it was by society then, how many of the folk in it met their end through AIDS or, in one case, being murdered by a client. That all seems so far off in the relaxed, anything-goes climate of this series. No holds barred on the language: one of the catchphrases comes in the 'lipsynch for your life' finale when the two competitors at the bottom have to battle it out on the catwalk - 'and don't fuck it up'. The entrants have to display their Charm, Uniqueness, Nerve and Talent; of the two lipsynchers, Ru says to one, following the Paris is Burning lingo, 'chantez, you stay', to the other, 'sashay away'. 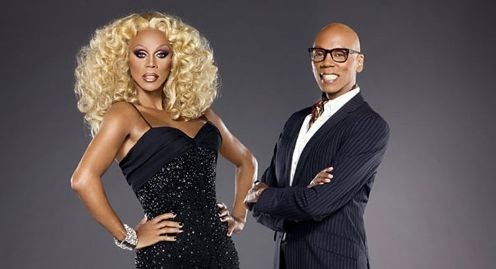 A more charming and encouraging drag mother you could hardly find (Ru appears for part of the show undragged, as above on the right). There are defiant mantras like 'RuPaul's Drag Show - bringing families together', and my favourite slot each season is the one in which the entrants have to drag up and make up outsiders. One deliciously skewed instance is when the grooms-to-be of engaged straight couples have to be dressed up as the bride before the couples can be married onstage. In another, mostly older gay men from the US armed forces who fought for the rights which, among other things, make the show the happy, liberated thing it is become the 'drag mothers' (or sisters). This is where I totally took my hat off to Jinkx and his/her emotionally mature response to his veteran 'drag mother', who found it difficult as an HIV-positive man on a punishing drug regime to moves easily.

Their partnership as Liza and Ethel won the game, of course, and despite being bullied by an especially insecure and spiteful fellow-finalist, our Jinkx took the crown. Watch her wipe the floor with Detox lipsynching for her life to Yma Sumac's 'Malambo No. 1'. The only decent version on YouTube doesn't seem to be downloadable so click here for the link.

What's artistic? Quite apart from the sheer 'Miss Congeniality' star quality of many of the performers - who could not adore big basso Latrice Royale,  'chunky but funky'? - some, like Jinkx can really sing at the level of any cabaret chanteuse, while the inventiveness of gown, frock and wig design in the many costume changes of each episode, can be breathtaking. It's actually not so far away from the couture of pantomime dames, which gives me the pretext of a picture interlude. The other week, I took my aged P to the latest Wimbledon pantomime, Cinderella (and got to write about it for The Arts Desk). A memory that will stay with me always is ma laughing until she cried at the ponies pulling Cinderella's coach - something she remembers from her childhood - and at the animal heads in a sylvan interlude (pure Magic Flute). 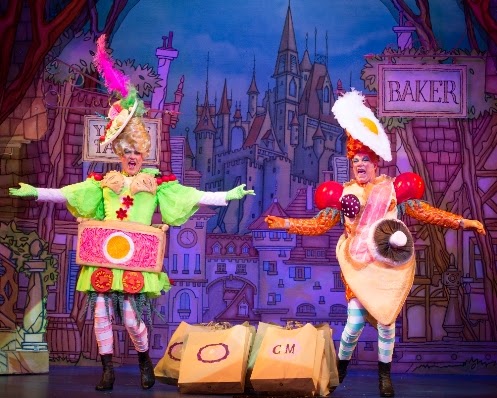 Father and son Matthew Kelly and Matthew Rixon are sisters Cheryl and Mel (photographed here by Craig Sugden in images I couldn't cram in to the review). Oddly the costume designer isn't credited in the programme, but he/she has done wonders on the breakfast frocks, the girl guides terrorising little Wayne Sleep at the country fair 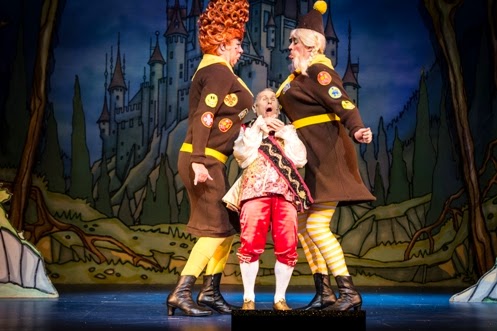 and - these of course have to be the pieces de resistance - the ballwear. 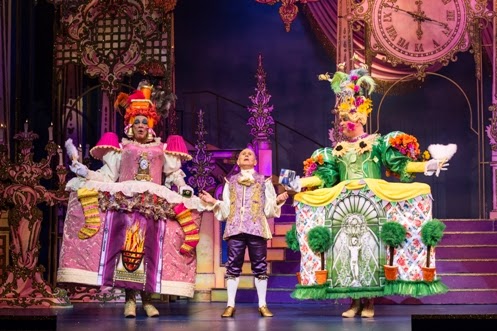 As for Jinkx, she is a consummate artiste. That much was evident in her all too brief, post-cold slot with brilliant pianist Major Scales at the Black Cap: every line, ad lib, grind and bump perfectly timed. The singing voice is unique, too. 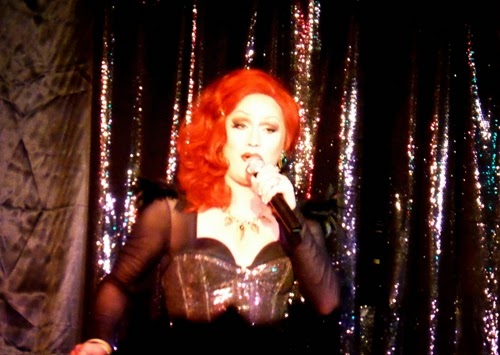 The snag - and this is why I can't go back to see Latrice - is the amplification, so distortingly loud I went temporarily deaf in my left ear. And it was pointless in that one could hardly catch a word of any of the songs. I wouldn't want Jinkx to leave the drag circuit, but she's good enough to wow much larger and more mixed audiences than this. Watch her fly. And, whoever you are, watch all of RuPaul's Drag Race as a chunk of pure seasonal escapism and joy.
Posted by David at 12:14

What I wrote on the more recent post really does belong here most of all--for drag IS high art: I thoroughly enjoyed the juxtaposition of RuPaul and Cinderella. Perhaps it was those marvelous OTT Cinderella costumes, but a post of what might have been quite disparate elements ended up seeming all of a piece.

Gallant of you, as ever, to step in to the breach, Sue. Maybe, as David pointed out above, there simply wasn't anything to say.

My link WAS those outrageous costumes - many as crazy and inventive have been seen in rounds of RuPaul's drag race - but perhaps most common to both worlds is a sense of sheer, unadulterated, even childlike joy. I can't think of better tonics at this time of year, our armistice with the truth.

"Our armistice with the truth" is such an important observation. The Edu-Mate has been reviewing entries in WWI war diaries that describe incidents we've come to know under the rubric of "Christmas truce."

When I think of drag--and particularly its history--I think of how knowing it is, and yet how joyful of life, against all odds. The phrase "armistice with the truth" contains that clear-eyed recognition, too.

I borrowed the phrase from Robert Byron's The Road to Oxiana. For foreign travel, however adventurous, is most often an 'armistice with the truth', too. But it does bring you face to face with an awful lot of human kindness and hospitality, too, especially in the Middle East. Or did...

Went for the Drag, stayed for the Race! On New Year's Eve, we were treated to a marathon of the most recent Season (Six); and, never having seen the show, I recorded all of it, to be viewed one episode every night possible. Here, what I think of as arts contests (dance, singing, fashion design, even some visual arts, for a couple of years), are categorized as reality shows, grouping them with Real Housewives and other programs where people allow a view into their personal lives. The first few episodes were pure entertainment, with lots of posturing and pulling of comic faces added to the performance, as competitors vied to claim positions, while judging the others in a way that was partly good-natured and partly sly. Except for my attaching to an immediate favorite - who was eliminated early - lots of fun. I was delighted to find that the two up for elimination competed in lip-sync (kind of Project Runway meets The Voice and So You Think You Can Dance!).

Lip-syncing was all I had really thought to expect on the show. To begin with, it had never occurred to me that the drag queens designed and sewed their own costumes. RuPaul's mentoring in the workroom reminded me of how good he is at interview. As the weekly eliminations distilled them into a shrinking group, the "reality" aspect increased. Onstage, we were shown how multi-talented are the ones who endured. Offstage, we began to witness them being less "on," as they talked more about themselves and interacted more with each other, some seeming to form the beginnings of friendships. I found it interesting that RuPaul, as well as some other judges, even advised the queens to show more of themselves, while their profession involves disguising themselves completely.

So glad you recommended this series! Favorite episode: Drag My Wedding. RuPaul and I have different personalities. He is as outgoing as I am shy and quiet. He looks deeply into individuals and, under the guise of entertainment, helps more people than he will ever know. I can relate to him especially because of my favorite quote, from Ru while mentoring in the workroom: "Emotions don't scare me." -- Elizabeth

Can't tell you how thrilled I am, Elizabeth, that someone took up the challenge - and expressed what I find most wonderful about this more-than-game-show, the slowly revealed layers of supreme talent and truth, in much more eloquent words than I have.

The diplo-mate has insisted on watching it all again, and while I haven't always joined him, I can see that it's rich enough to take more details. So we are coming up to the final of Series 6 again (after which I have suggested, since I can't enforce, a total break until Series 7 arrives) and I marvel at the supreme wit of JinKx and Alaska, not to mention Ru and Michelle Visage. It does make me think that the polished comedians are the only ones I'd want to see in one-woman shows, for I can't think what ultimately would sustain the rest. This format, though, is the perfect package for the outlandish make up and creativity in dress design...and it's truly joyous and life-affirming, no?

I agree about the wedding episode, so subversive in every way. But I also like the other dressings-up of straight dads and gay veterans from the armed forces (Jinkx with Dave is such a highlight, and how sensitively he handles him).

Finally, your homage to Ru is so beautifully put and grants him the seriousness he deserves. I'd missed the episode first time round where he lost it and got genuinely angry, but it didn't make me think any the less of him for that.