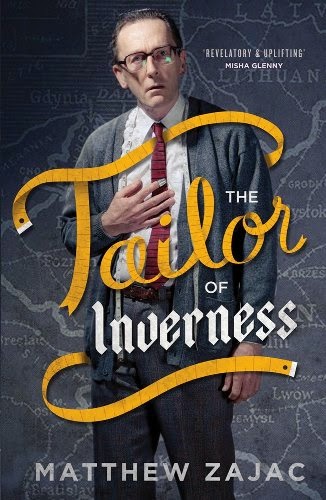 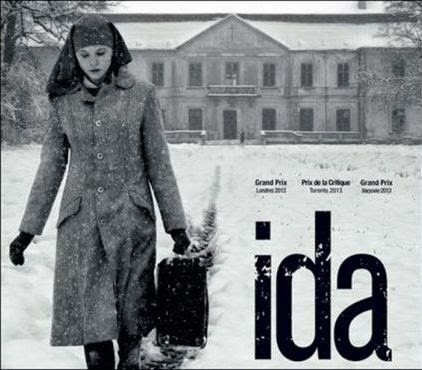 One of the many things taught me by my dear Viennese friend Trude Winik (1909-1998), who lost her father in the First World War and her mother, brother and sister to the camps in the Second, was that the past is always present so long as the person who experienced it lives on. In Trude's case it was a guilt which haunted her every day, that she survived when the rest of her family didn't. Now a gripping family history, Matthew Zajac's The Tailor of Inverness, and a film about life two decades or so after the end of World War Two, Ida by that superb filmmaker Paweł Pawlikowski who had already given us two very different and equally fine British movies, Last Resort and My Summer of Love, remind us that the past lives on in the next generation too.

It was serendipity that I came across The Tailor of Inverness among the books sold alongside the box office in Inverness's Eden Court Theatre the day before we watched the DVD of Ida - in turn, the day before it won the Best Foreign Language Film category in the Oscars (not that one cares for any ceremony which omits Mike Leigh's masterpiece Mr Turner from the main categories - I rant about that in my DVD review for The Arts Desk).The blurb made it sound interesting, but more especially I liked the idea of supporting a local publisher, Sandstone Press. More in the next post of why I was up there last weekend.

I don't know how much I can say about book and film without giving crucial information away. Both are thrillers in the sense of revealing surprise informaton - and Ida has a gut-wrenching twist about two-thirds of the way through for which I was completely unprepared, so you should be too. Both remind us that few folk escaped from the maelstrom of the war in central Europe uncompromised, let along unscarred. Zajac Senior came to Britain in 1948, married an Englishwoman and settled in Inverness where he made a success as a tailor after early vicissitudes. 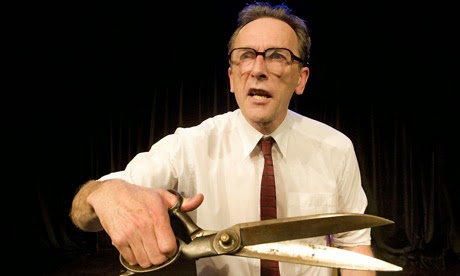 Son Matthew (pictured on the cover of the book and above, by Murdo MacLeod, playing his father) speaks simply but rapturously of summers with his uncle in Lesna, south west Poland, a place of natural plenty. The kindness of relatives and friends is an overwhelming constant throughout, and helps him weather the revelations when they come. Suffice it to say that as an accomplished actor with his own theatre group, he made an Edinburgh Fringe First winning play about his journey of discovery which toured to the places he visited, Poland and Ukraine, among others. He writes:

It seemed right to me to take the story back to its origins, but I was nervous about how it would be received [well, as it turned out]. I was conscious that it could be viewed as a presumptuous act, for a foreigner to have the gall to tell Poles and Ukrainians their own story. But my previous trips to Ukraine in particular had told me that this was a story which had rarely been expressed on a public platform. The shock of the war and subsequent 45-year Soviet stasis retained their grip. The fear of speaking out which was endemic to the old Stalinist culture meant that many people, particularly in the older generations, still had a policeman in their head. 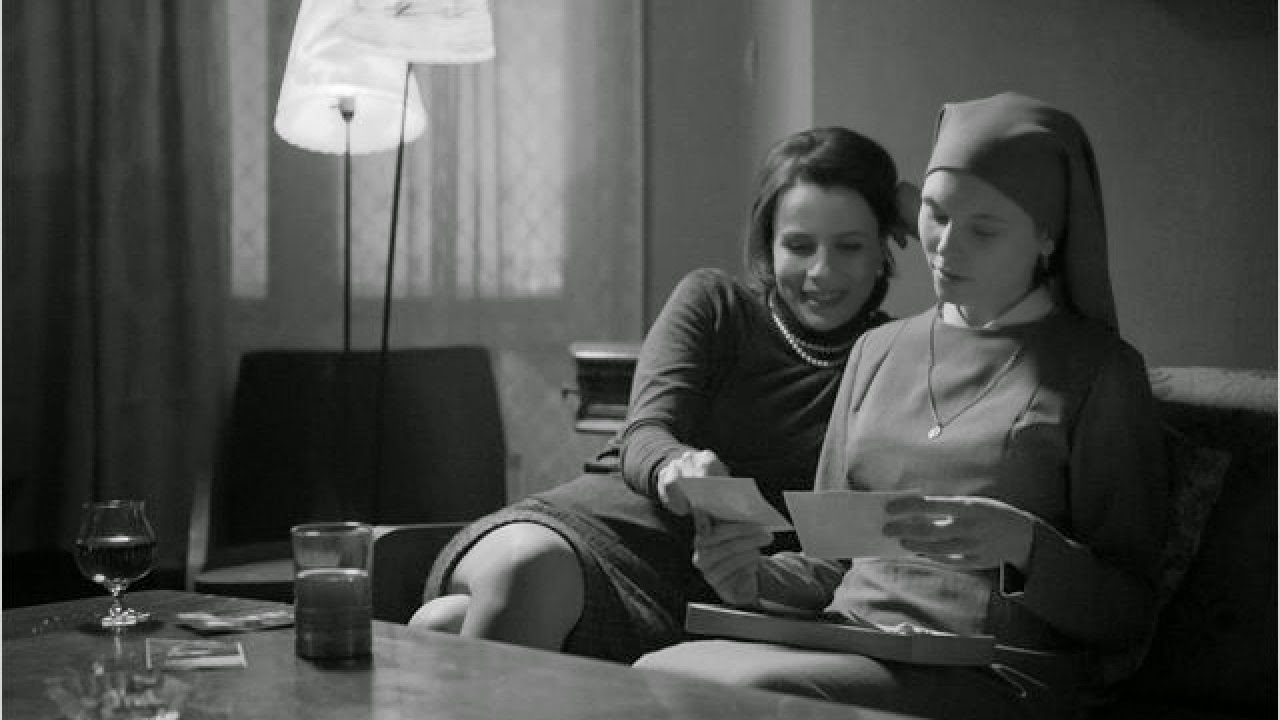 These are the same preoccupations of Ida. Framed as the kind of 1960s Polish art film the director remembered from his youth, in the square format then common, every scene is composed with an aching beauty, and there's a special affection for the bands of that time (the love-interest saxophonist is very handsome, too). Like any great film from the European masters, it has remarkable performances - in this case the contrasts and symmetries played out by Agata Trzebushowska's ambivalent Ida and the magnetic Agata Kulesza as Wanda, communist functionary with a painful secret. 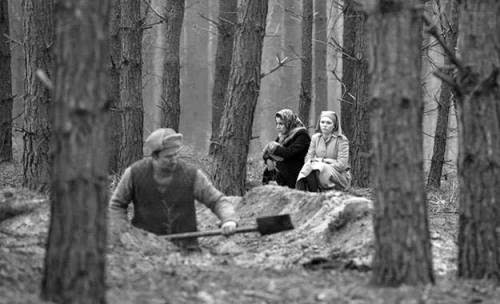 Also as in any great film, the music is kept to a minimum; the actresses and the cinematography carry it all. I don't think I want to write any more: just see it.
Posted by David at 11:23

Agree, absolutely on your advice on Ida to anyone who hasn't: "go see it." Agree, too, on your assessment of Mr. Turner. I'd forgotten about the Ruskin character, which you've caught just right in your review. So many fine aspects to this film, and the cinematography was brilliant, with the The Fighting Temeraire as the peak, absolutely. Thanks, too, for the book recommendation, which has gone on my wish list.

Mr Turner is a constant presence in my head - the light in which even many of the indoor scenes were bathed, a lucid corrective to all those inky black Sibelius 4s I'm going through for Building a Library, and the way the characters lived from the very first dialogue, and live still.

The book is very readable and obviously sincere, nothing forced, and I only wish I'd seen the play, which doesn't seem to have come to London.

David: Vivid reminder, even in your comment, that Mr. Turner bears seeing more than once, as there is so much to take in. I'm looking forward to your Building a Library segment, very much. (BTW, on the subject of BBC Radio 3, while I don't know whether this will be broadcast, did you know Stephen Johnson will be introducing the preview concert for this year's Vale of Glamorgan Festival? I was delighted to see that.)

Coincidentally, my BaL on Sibelius Four - not my first choice by any means, if only because I wondered if I could live with its heart of darkness, and so far I can - follows in the footsteps of Stephen's, which must have been made more than a decade ago. I won't listen to it in case of influence, though I know he chose Vanska's Lahti performance. I haven't got to that one - or the Minnesota one - yet, but this will be a real test of whether I like him more in context.

"The past is always present so long as the person who experienced it lives on" Could we not leave it at that, and as people die so the tragedies of the past can fade ? Not completely....we have the ceremony at the Cenotaph every year, and books and films such as this are valuable as in the same way as Hamlet or the Greek tragedies they analyse the human predicament, and more directly as in a more modern idiom. But the constant evocation of past horrors in society generally is a distorting and un-useful factor, leading not to the avoidance but to the encouragement of their repetition. Death has many disadvantages but it should have the advantage of carrying away from our minds the dark episodes in history.

'Those who forget history are condemned to repeat it'? Or perhaps, like Putin, observe it and behave likewise (the parallels with Mussolini are astounding).

Anyway, I don't agree with you, David, on a personal level. I've thought and talked a lot about repeated patterns of behaviour down the generations. I imagine that the shadow of my paternal grandfather's sickness, the fact that mustard gas poisoning in World War One left him an invalid for the last 24 years of his life, had an effect on my own father, who became an invalid after a stroke and had, I think, been quite severely depressed before that. Which then meant - along with what I read about the effect of a parent's death on an adolescent, and my father died when I was 15, grief left improperly expressed, emerging as depression in mid-life - may also partly account for my first major depressions leading up to my 50th year.

Sorry to be so personal, but if one can't understand these things through experience, how can they be used to contradict a generalisation such as yours?

Of course on the personal level your points are valid. And your personality always shines through brightly in the Blog. On the level of society as a whole I still argue that it would be better if the horrors of the two World Wars were to fade into the past. Let the dead bury their dead. ( I have never reaqlly understood that remark, though it seems to have meaning)

Surely it's instructive to recall chapter and verse as we hurtle through the worst time in the world I can remember in my lifetime. Mass consumption of filmed beheadings is something new, of course, but the atrocities are not.