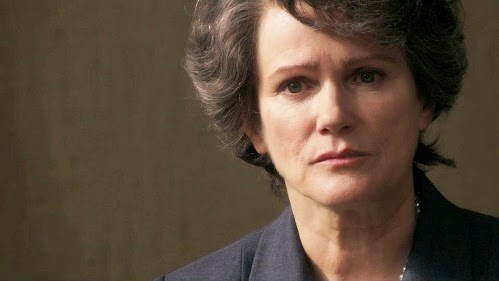 This is one of those unpremeditated posts where I rush to gush, I hope not too indiscriminately, about a pleasant surprise just witnessed/experienced. On an idle Sunday afternoon, both shaking off thick colds which have evolved with all sorts of hideous offshoots like eye, lip and sinus infections (gross, yes), we watched a film I imagined would be a little solid and grey, Margarethe von Trotta's Hannah Arendt. It was good enough for me that I'd read and admired Arendt's study of Adolf Eichmann's 1963 show trial  in Jerusalem, and that the film featured two actresses I love to the point of idolisation, Barbara Sukowa (consummate for Fassbinder in Berlin Alexanderplatz and Lola, spellbinding reader of the Stefan Georg poems for Schoenberg's Pierrot Lunaire with Mitsuko Uchida) and Janet McTeer (perhaps still top of my No.1 great stage performances list as Ibsen's Nora, though Juliet Stevenson's Winnie is now joint first). 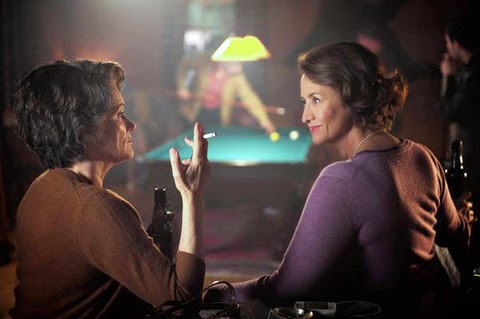 Forget Downfall and The Lives of Others, both films I found well made and acted, but a bit too mainstream-conventional: if you're sober enough to face it, this is the most masterfully understated non-documentary film I've seen about the Nazis. Except, of course, it's about so much more: the integrity of examining a problem philosophically, the refusal to compromise a point of view, staying intensely human all the time. And humanity in her women - Rosa Luxembourg (also starring Sukowa, must see it again) and Hildegard of Bingen (must simply see it) - would appear to be a von Trotta keynote.

Nobody puts a foot wrong here. It's not often you think you see inside someone's mind - though that happened recently, the understanding and then the enigma, with Rylance's Thomas Cromwell in Wolf Hall, another film - even more remarkable on BBC Television these days - which was not afraid to focus on reaction without dialogue for long stretches. Sukowa is astonishing in the way she expresses the power of thought (she also looks nothing like Hannah Arendt, for what it's worth, but compelled me throughout all the more by her resemblance to my own beloved, incorruptible and bloody-minded academic Noëlle Mann). Here we follow Arendt through the Eichmann trial, where von Trotta uses the extraordinary archive footage and shows us the shrivelled, unthinking man not just on the wide screen but also on the TV format which viewers would have experienced at the time. My thanks to The Orphan Film Symposium for putatively permitting me, since I give a link and advise you to go over and read, to use a juxtaposition of stills. My further juxtaposition is to show Sukowa's Arendt watching the telly in Jerusalem. 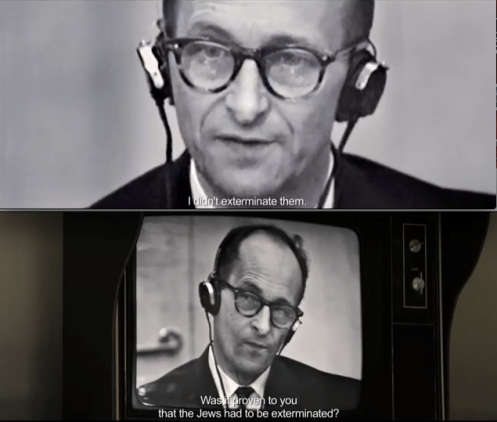 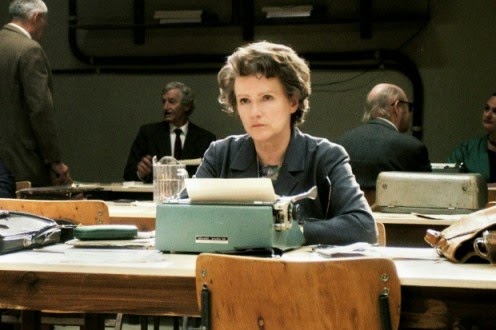 We know what Sukowa's Arendt is thinking before she explodes in her reasoning, fascination, horror and disgust - not just at Eichmann. We follow her believable incorruptibility as America and Israel go crazy over her refusal to tone down the facts about the Jewish leaders who collaborated, under unthinkable pressure (and if you read Amos Elon's wonderful introduction to the Penguin edition of Eichmann in Jerusalem, you learn that Arendt was not as measured in some of her original expressions as we are usually led to believe). The naked explosion of hate, usually by folk who hadn't read the New Yorker articles or - more often - said they were too disgusted to get to that point, is so familiar today today.

A Jewish New Yorker friend of mine says you famously can't discuss certain things rationally with folk who are so rational on most other issues: viz the madness over Adams's The Death of Klinghoffer at the Met. But it happened here, too, in blatant misunderstanding of the Tricycle's refusal to screen its annual Jewish Film Festival last year because funding from the Israeli state was involved and they simply couldn't be seen to be partial (they wouldn't have taken money from Palestinian organisations either). We see, month by month, the hideous parallels between the oppressors and the once oppressed: I'm glad Obama laid it on thick to Netanyahu that he had crossed the line in trying to get votes by being alarmist about Arab voters were rushing to the polls. His own people - Jewish citizens! Substitute 'black voters' or 'gay voters' and you see how far it's got. No politician in this country, not any that seriously expect to be elected at any rate, could possibly get away with it (even Farage tries to cover up most of the time).

Too much of a digression there. But this is a real riff in itself, so let it stand. There's no hysteria in this film. Sukowa's Arendt gets her big speech to the students in the face of dismissal, decidedly a 'yesss...' moment. 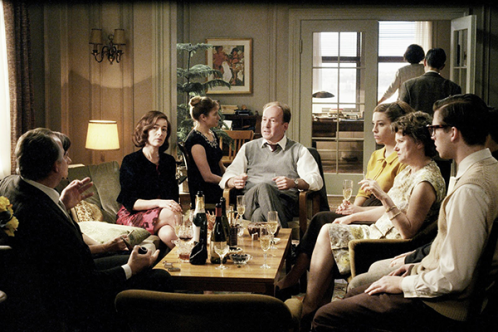 But all the performances work as an ensemble to keep this a perfect example of an understated biopic, real marriage and strong friendships (where McTeer's Mary McCarthy comes into her own). Essential watching for all schoolchildren and university students. Even though you should still read the book, tough as it sometimes is, this is no filmic watering down of it, but rather something different that works flawlessly on its own terms. A final shot of Arendt - who, as Sukowa and von Trotta make clear, was as often vivacious as she was steely - in 1972. 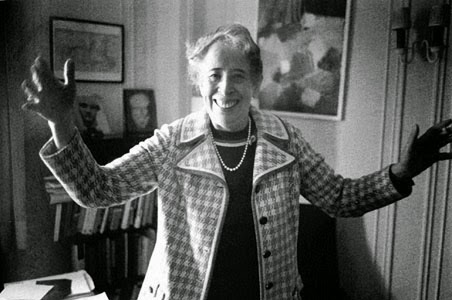 Thank you SO much for noting this--though sorry you had to suffer miserable colds and their consequences to end up viewing it yourselves. I would NOT say "too much of a digression" to your commentary at that point, and indeed it is astounding how the seemingly rational lose their grip on rationality at certain times. In what is truly a digression, I remember so well, at the time of the Iraq war, Le Carre's statement, "America has entered one of its periods of historical madness," not to mention Susan Sontag's comment, for which she was widely denounced: “Let’s by all means grieve together, but let’s not be stupid together.” I look forward to watching the film, and the book appears to be a must read, too, though it may be some time before I can get to that.

Yes, of course, you are one of the many sane voices, the best of America (one has to keep remembering how divided it is - and I need to remember the incredibly responsive audiences at Bard). Incidentally, it was another New York friend I was referring to, based in London. Fortunately a lot of them around and of course Klinghoffer did triumph in the end.

We've actually had quite a jolly few days hunkering down and facing out the viral enemy(ies). It's been a rotten winter for illnesses (flu I would regard as pretty major, though that of course did pass). I need an MOT.

It is difficult enough to get at the truth by studying facts, without confusing the mind with fiction. And the nearer the truth a portrayal the more dangerous it is.

Once again, Sir David, I'd take you more seriously if you ever watched such films, or listened to Wagner. As it is your judgments are nearly as dangerous as those of folk who condemned Arendt's work without having read it.

By the way, the story of Chekhov's doctor recommending champagne to the dying man is pure fiction - Raymond Carver, in fact - but was embarrassingly taken as gospel by a Chekhov biographer. Only connect.

I will only add that to see a fictional work prejudices the subconscious for ever....I will NOT bias my judgement of difficult topics by such means.If I saw the film how could I in the future ( anyway after a short period) be sure that my ideas about Arendt were about her or about the actress? And the better the film as a film the worse the impact. I am very much in favour of Arendt( the real one). Her point about the banality of evil is often repeated but is still an important insight.

The right recommendation to a dying man is Tokay. If the Essenz, it is supposed to bring you back to life

As you know I now work in 2 National Museums and encounter the public and their questions. I wonder in the face of mass ignorance if anything matters. Hannah Arendt, the Nazis, Eichmann etc... Any discussion as to come from an informed point of view. Today you have points of view based on P.C. thinking which has nothing to do with the facts. Those who now condemn Hannah Arendt appear to make their opinions not on facts but on a very narrow perception of what happened in the past and judge everything with today's sensibilities thus condemning the past.
An example I encounter at the National Gallery visitors who ask me why we promote works by Pedophiles like Caravaggio, or why we have nudes on the wall or Christian theme Renaissance Art. They want it all removed as degenerate, they use the word inappropriate, unsuitable. Funny age we live in.

Fortunately, Laurent, I don't think there are many now who disagree with HA's calm presentation of the facts. As I wrote, there is an understandable pathology among a certain strata of Jewish society - and I will probably be called, equally irrationally, an anti-semite for saying so - which leads to an inability to respond to chapter and verse with the same. The Klinghoffer and Tricycle debacles were ample proof of this. As for Netanyahu, his opportunistic malice seems to know no bounds. The comment about Israeli citizens who happened to be Arabs would have disbarred him from office in most European countries (you only have to substitute the word 'Arab' with 'gay' or 'black' to see how invidious that remark was).

I'm astonished by the responses to Caravaggio. You'd expect such things from the current Russian so-called 'culture minister' re Tchaikovsky, but this is just sad and daft. Incidentally, I remember going round the National Gallery with a friend and her 8 year old son, and when encountering paintings such as Bronzino's Venus, Cupid, Folly and Time, he'd cover his ma's eyes protectively and say 'mummy, you mustn't look, it's rude'. Odd, I can't remember nudity in art being either a turn-on or a taboo until I was at least in my late teens...