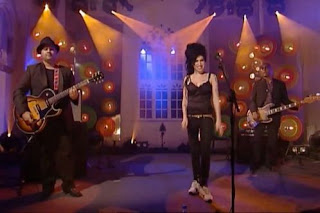 but with a voice, a charisma and a performing maturity beyond her years which set Amy Winehouse among the all-time greats. The comparison with Mahalia Jackson, Sarah Vaughan and Carleen Anderson, not to mention players like Thelonius Monk whose instrumental quality she could take up so uncannily, isn't hyperbolic: watch the BBC Arena documentary Amy Winehouse: The Day She Came to Dingle and see how sequences from the work of those magnificent artists don't diminish the performances of our own diva to an audience of 85 in a tiny church with only two guitarists (Robin Bannerjee and Dale Davis on bass) for perfect company. I watched it on the BBC Four iPlayer facility, only to find that it's on a hybrid set - CD, DVD - where the sound-only first disc also has plenty of treasures. 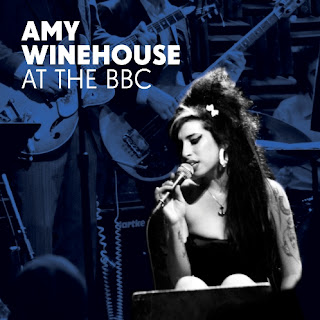 Having seen the Dingle doc, and witnessed what has to be the true and deeply curious, questing individual in fascinating interview with Philip King, founder of Dingle's Other Voices Festival, I wasn't sure I wanted to see the new documentary Amy, It was bound to emphasise the tragedy of Winehouse's life at the expense of what remains for us now: in other words, to reverse the words of Dan Cairns on the BBC set, a wake rather than a celebration. 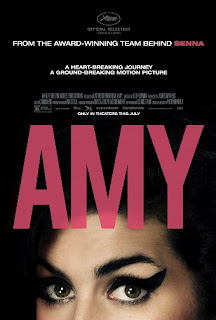 Yet it's vital, if queasy and deeply distressing viewing. I knew how the industry eats its stars, but maybe not in such harrowing detail. The director, Asif Kapadia, simply lets people like Amy's foolish dad and weak boyfriend - not evil people, but so far short of understanding or the wit to do the right thing - condemn themselves out of their own mouths. And there's no doubt that if Mitch Winehouse had followed the wisdom of her lovely, utterly decent first manager Nick Shymansky and made sure she got into rehab before the feeding frenzy truly began, and if she had properly got shot of Blake Fielder-Civil, as well as the fatuously evil Svengali who took over from Shymansky  and pushed her beyond what she could manage, the undeniable tragedy might not have happened.

Shymansky and two schoolfriends show that goodness and loyalty can be simple in the face of awful cynicism and exploitation. Chat show hosts like Graham Norton and Jay Leno must be hanging their heads in shame at the cannily placed clips of them mocking her demise while the truth unfolds; but then they were not alone in watching the meltdown from a comfy distance. What's unforgivable in both cases here is that they'd had Amy on their shows and presumably got to know the real person she always was just a bit in happier times. 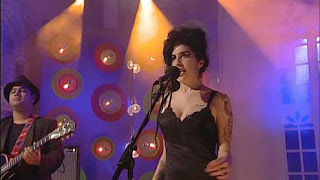 You may find the comparison absurd, but in the later stages I was reminded of Tolstoy's Anna Karenina: the sense that this need not have happened, that the heroine in both cases could so easily have resolved the worst, gone one way rather than another even at a late stage, is so intense. There was a last flourishing where Amy went clean and met and duetted with her idol Tony Bennett, the Good Father whose valedictory words - I'll leave them to the film - break the heart. Not that everyone seemed as shook up as we were coming out of the Notting Hill Gate Cinema: one girl was blithely jive-ing. We stared in amazement.

It helps to know what an authentic, confused but never malign or insincere human being Winehouse was, but of course it's all there in the songs: at one level pure confessional albeit raised to pure artistry in numbers like 'Rehab', 'You Know I'm No Good' and 'Back to Black', at another the spirit of something else speaking through a voice wise way beyond its years ('like a 65 year old jazz singer', as one commenter put it). Bearing in mind her jazz roots, exemplified in the film by a clip of young Amy singing with the National Youth Jazz Orchestra, she would surely have gone back to more of that once the songwriting vein had subsided a bit.

What's amazing about her own numbers is that stuff which on paper looks like the stream of consciousness of a tortured adolescent is shaped into meaningfulness by the phrasing. And one can well believe that she never gave the same performance twice. The way, moreover, she switches on at the beginning of a number and then at the end signs off with a north London little-girl 'thank you very much' and a curtsey, is memorable. Anyway, watch the six Dingle numbers on the DVD and marvel. Here's one of them, my own personal favourite, showing what a great artist can do with a handful of notes.

Labels: Amy, Amy Winehouse, Asif Kapadia, Back to Black, Dale Davis, Other Voices, Rehab, The Day She Came to Dingle

David, this is a lovely tribute. You know, this isn't music I listen to, but I have done so on your instigation, and you are oh, so right. She had a voice in a million, no, not just a voice, but a deep understanding of how each note should sound, when each breath should occur. It's such a tragedy she became caught in a trap from which she couldn't escape. I can only imagine what she would have given us, had she lived to an appropriate age.

A voice and a musical understanding in a million, that's exactly it, Sue. Artistry is the same in every genre. I'd rather hear Whitney Houston singing a cheesy pop song than a less great voice trying to 'do' opera. Glad you watched the clip.

I think all the other Dingle concert songs are on YouTube, but it's best to watch the doc as a whole because the comments and the interview are so revealing. Plus that was a place where she could have retreated to find some real inner peace of mind, I'd have thought, rather than St Lucia with dad arriving with a film crew... You need good souls around you perhaps even more than a beautiful place.

Unfortunately, the BBC4 documentary is blocked for the US. For that reason, I couldn't watch your clip, but found another example of the song. I did, however, find a trailer for the documentary and found it very touching indeed. I had exactly the sense that you did: that it was a place she might have been able to retreat with good souls around her and simply sing.

Gosh, that means that even on YouTube UK docs can be blocked elsewhere, even snippets. Well, well. But what I did was to watch the rerun on BBC Four's iPlayer and then to order it up on the two-disc set, because I know this is one I'll want to watch again and again. I don't think I could stomach the bigger documentary a second time, though - which is not exactly a criticism, just an observation on the nature of a very different beast which inevitably is less about the music.