Domestic strife at the Frontline 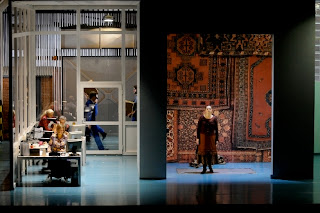 A cup of coffee helps to put things right in the turbulent household of Robert and Christine Storch (aka Richard and Pauline Strauss – played above in the recent Garsington production of Strauss's Intermezzo by Mark Stone and Mary Dunleavy, photo by Mike Hoban). It takes mushrooms sprinkled with rat poison, and then a good old-fashioned strangling to solve the problem among the Izmailovs of Shostakovich's Lady Macbeth of Mtsensk when bored and abused housewife Katerina wants a real man (my thanks to Eduard Straub for allowing me to reproduce two images from the ever-fascinating Dmitri Tcherniakov's production as first staged for Deutsche Oper am Rhein, heading for ENO on 26 September).

We've had several summer months to put between the Strauss comedy and Shostakovich's compassionate shocker - to which I'm devoting five weeks from Monday 28 September  - in my Opera in Depth course at the Frontline Club (update: Mark Wiggleworth, with whom I recently had a true conversation for an Arts Desk Q&A, has agreed to come and talk on both Lady Macbeth and Verdi's The Force of Destiny on 2 November).

Back in mid-July we wound up in double-quick time with the happy ending of Strauss’s autobiographical marriage opera, and after doubts seeped in with Dunleavy’s less than sympathetic Christine at Garsington, and for that matter with the only half-realised production from Bruno Ravella, Felicity Lott and John Cox in the Glyndebourne production of the 1980s – the only one, I think, on DVD – won even hardened sceptics round. 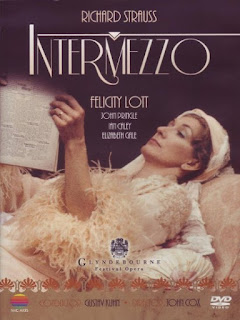 It was Elisabeth Söderström who sang the first Christine at Glyndebourne, and a half-good Chandos recording exists to testify to her own doughtier charms. Flott simply owned the role, as they say: she’d figure as a great comedienne if Strauss’s excellent libretto were merely read out. With both physical glamour – which presumably the real Pauline didn’t possess – and nervous perplexity and perversity – which clearly she did - she suspends all disbelief.

Even so questions need to be asked about one crucial issue: why, when Strauss put in nearly all his real wife’s bon mots and her less attractive qualities to boot, didn’t he mention that the wife had been a superb prima donna who gave up her singing career to look after husband and son? Clearly the flighty temperament was always there, but wouldn’t it have been exacerbated by dissatisfaction that she had sacrificed her career. Christine in Intermezzo is merely a spoilt housewife with charm, if you're lucky with the performer, and that’s unfair to the autobiographical roots.

The other question that bugs me is where Christine’s presumably naïve flirtation with the young Baron Lummer – a comic take on the Marschallin-Octavian relationship deliberately evoked in fleeting moments – had its roots in real life. Everyone who loves Strauss knows the anecdote of the mistaken telegram which nearly led to divorce on grounds of infidelity. But I, for one, would like to know about the Baron Lummer saga. The point here, though, is that it mostly shows the heroine in her most attractive and even generous lights. 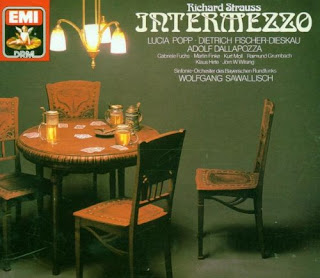 We will probably never know. All I can say is that with the very first class I was back in love with the score and (most of) the situations. It was also a pleasure to get to know the splendid vocabulary of Strauss's original German libretto (both the Glyndebourne and Garsington productions were sung in Andrew Porter's fine English translation - right under the circumstances, I think). That was thanks to other supreme interpreters – Lucia Popp and Dietrich Fischer-Dieskau on the Sawallisch recording, more recently the wonderfully characterful and humorous Simone Schneider on a new CD set taken from a semi-staged Munich performance. 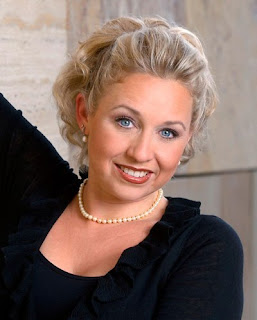 And Jeffrey Tate’s Rotterdam Philharmonic recording of the Four Interludes embraces a desert island track of mine in his very leisurely but glowing account of the “Reverie by the Fireside” – perhaps Strauss’s greatest slow movement. 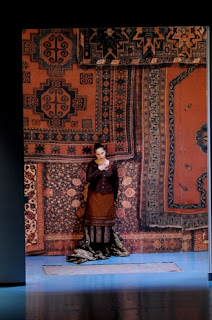 Four of next season’s operatic choices for the course leaped out when English National Opera announced Lady Macbeth of Mtsensk as its opening production (second image of original Deutsche Oper am Rhein production above), Verdi’s La forza del destino to follow  and Tristan und Isolde as its big show of next summer, while the Royal Opera’s Boris Godunov, directed by Richard Jones and conducted by Antonio Pappano, ought to be among their best successes. I knew I couldn’t justify a whole half-term on Enescu’s Oedipe or Gerald Barry’s The Importance of Being Earnest, so why not spend three Mondays on the tragedy and two on the groundbreaking operatic comedy? Mark Wigglesworth has promised to come and talk about the first two new productions he'll be conducting in his first season as ENO's Music Director, and I hope Richard will return for Boris. Join us at the wonderful Frontline from 28 September - Mondays 2-4pm; contact me for details on david.nice@usa.net. Oh, and yes, I admit it, this is a 'shop-window' entry.
Posted by David at 19:48

David: The ENO productions you note make for quite a line-up! I'll be interested to find out what you think of the ENO production of Lady Macbeth of Mtsensk vis-a-vis Graham Vick's (which I saw at the Met and I think you also saw?). I'm glad, also, you pointed out that Strauss's wife was "a superb prima donna who gave up her singing career to look after husband and son." Reminds me a little of the treatment of Alma Mahler, who, after all, had to give up composing as a condition of marrying Mahler.

No, Sue, I haven't seen Graham Vick's production. David Pountney's served the ENO well in several seasons - the last time, Wigglesworth conducted it with such depth, and I remember jumping out of my skin at the blast of brass band launching the Passacaglia.

Constanze Mozart, Anne-Marie Nielsen and Pauline Strauss were all at the forefront of my imagination a couple of months ago, so I asked the BBCMM for the obvious - to write an article about Wives of the Great Composers, and I'm doing it shortly.

I'll look forward to that article.

Sorry to pick nits, but methinks you meant Mary Dunleavy, rather than "Donleavy". I remember Dunleavy from several appearances at Opera Theatre of Saint Louis in the late 1990's and early 2000's. Every few years, OTSL latches on to a singer or two and seems to groom them for bigger things, by offering them plum roles after getting their feet wet either in the chorus or in a supporting role. At that time, MD was one of those singers, featured in the 2000 OTSL La Traviata and the 2003 Thais, among others. OTSL does very little R. Strauss (but we are getting Ariadne auf Naxos next year), so I wonder if Intermezzo might work well in the modest space that is the Loretto-Hilton Theater (987 seats).

That is very interesting that ENO is offering DSCH's Lady Macbeth of Mtsensk as part of its next season's repertoire. Hopefully they'll survive the latest round of administrator chaos.

Corrected, Geo. Think the name was right in the review, at least - incidental here, probably because she didn't blaze her name in lights for me. A fine light soprano voice which did everything it needed to, but the acting was tentative, especially when the music flows into spoken dialogue. I wish Glyndebourne would return to Intermezzo and Capriccio with Anne Schwanewilms, who I know would accept in a flash and has that great asset shared by Lott, a beautiful voice married to the talents of a born comedienne (she was so funny and warm in interview).

ENO's artistic side ALWAYS weathers the storms, and its last season was better than ever (at least since the Powerhouse years). This one looks wonderful to me, and I know Wigglesworth will not be a disappointing successor to Gardner, who left with vine-leaves in his hair. Ominous murmurs about changes to the season after, which of course will be when the post-John Berry plans kick in. So long as they stick to the plan of one musical a year at a time when the company is usually at rest (around Easter), I can't see huge changes afoot.