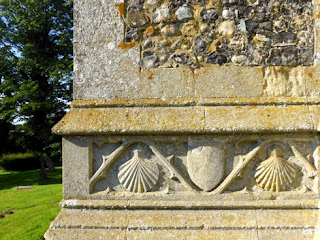 It's that time of year again when I begin the *church charity mug and we prepare to join what they call the annual Ride and Stride for the Norfolk Churches Trust (as walkers, needless to say). May the shell of St James, alternating with shields on the lower frieze of the church of that name in our base of Southrepps, be metaphorically pinned to our hats as we attempt our 18-or-so-mile pilgrimage of sorts. Only connect: a couple of weeks ago I was stunned by the cathedral at Le Puy, one of the starting points for the camino to Santiago de Compostela. 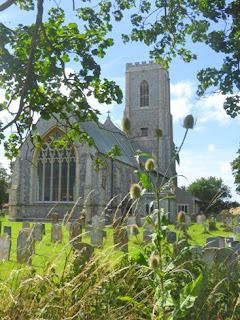 I appreciate that asking for donations of any sort isn't going to seem so very pertinent when more money should be sent to help the appalling refugee crisis, so wretchedly handled here in the UK, but I suppose I could rather opportunistically invoke IS's destruction of two temples in Palmyra, which we remember with such sadness, as a symbol of 'what's gone is gone forever' - and many of these churches must be repaired or crumble and 'die'. If you want to send a cheque, contact me (since I'm now very liberal, it seems, with shelling out my email) at david.nice@usa.net. You can sponsor by the church - I think we aim to see at least 14 this time - or in a lump sum. 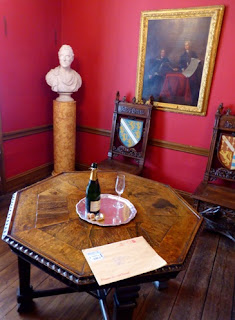 Last Thursday we enjoyed a little ceremony at the Tower of London, courtesy of J's raising the most money of all riders and striders last September and as a result being presented with a certificate signed by Charles (I've been slightly tongue in cheek calling it his 'Prince of Wales Award'). For its sake I was happy to postpone my visit to the Lahti Sibelius Festival, catching a plane out that night for the last couple of days. The hermit-like diplomate, though his photo will be in some East Anglian paper, won't allow the appearance here of a splendid one of him on Tower Green with two Beefeaters and General Lord Richard Dannatt (Sir, Baron, you name it, he's been decorated with it), Constable of the Tower and President of the Norfolk Churches Trust, so instead we have the latter and NCT Chair Sara Foster with the certificate. Though obscured by figures and flash, that's an 18th century painting of the Tower behind them. 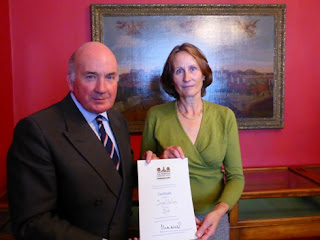 It was worth the excursion. General Lord Dannatt received us in the Queen's House, which of course no tourists usually get to see, lodgings for, inter alia, the young Elizabeth and Sir Thomas More, into whose wretched prison zone we were allowed to take our glasses of champagne (the television serialisation of Hilary Mantel's Wolf Hall wasn't filmed here, but they got the light and the space right, like so much else). 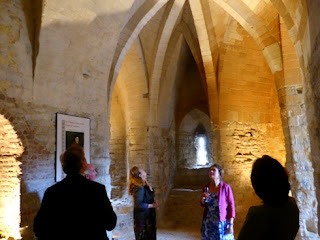 Plenty of hurly-burly surrounded us. We didn't return to the Chapel of St Peter ad Vincula because every quarter of an hour or so a great group of guided tourists filed in, and there wasn't time to jump into a gap. Some unfortunate visitor had fallen and broken his/her wrist by the site of the block - jinxed? - hence the ambulance. 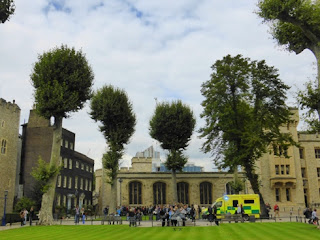 Then Jill and Cally went off to see the Crown Jewels and I returned home to pack for the flight.

This year we'll be walking in a different part of Norfolk from our usual Burnhams/Fens/western zones, since the chief organiser of our foursome has moved from King's Lynn to Lower Southrepps. Jill was hard at work singing in our enterprising friend the mezzo, composer and conductor Susie Self's Gershwin show at the Granary Theatre in charmingly old-fashioned Wells next the Sea. So we managed to combine a visit to a matinee before Jill nobly ferried us back to Southrepps for an evening concert. 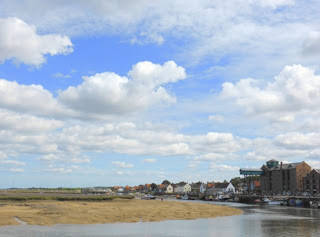 Susie had marshalled three excellent singers, including a Frenchman with an uncanny resemblance to George (though you had to pardon his English. When I find the programme I'll credit all three). The pianist was composer Michael Finnissy no less, consummate in this music and weaving in a couple of rarities as well as accompanying Susie in a deft cross-cutting between Berg's 'Nacht' and snatches of Gershwin hits ('Summertime' provided a remarkable correspondence). There was also an opportunistic star turn from Susie and Michael's totally adorable border terrier Tristan (I want one, always have). Here he is afterwards trying to lick Jill's ear before howling along to his owners' tormenting songs. 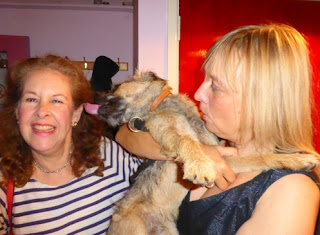 I fell in love with the Southrepps area when we went up for part of its serendipitous and superlative music festival last month, commandeered by top tenor Ben Johnson (read all about it on The Arts Desk). For TAD I was lucky to get screenshots of the concerts from the nice man filming them, but here's just one of some stands for the out-of-this-world Schubert Quintet we heard on Sunday morning. 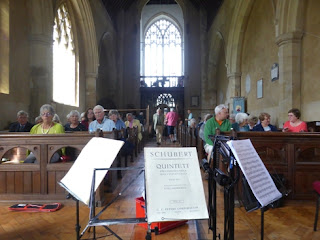 I'll save snaps of the church's few treasures for the blog entry on this year's walk - we start at Cromer and end up at Southrepps for an evening meal in the excellent pub, by which time St James's may well be closed - but as a taster of the area here are a few shots of a much shorter route we took that Sunday afternoon: only a couple of miles to the sea, viewed from above because here are cliffs (not had those on any of the previous walks). 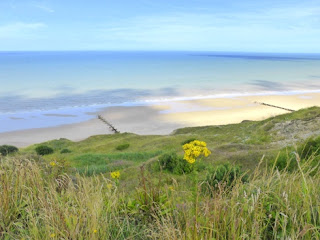 We came out on the coast road at a very pretty coastal village called Trimingham, its church a pilgrim site because of the head of John the Baptist (hence 'San Giovanni Decollato'); more will be revealed when we go inside on Saturday. 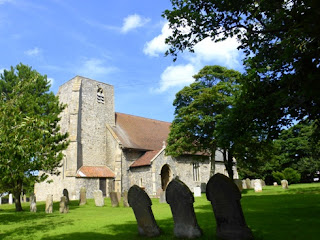 The walks to and fro are across very secretive-feeling farmland with an abundance of oaks - I loved it all - and back at Lower Southrepps there's a well-done boardwalk around a locally-maintained common which is a perfect sanctuary for birds. 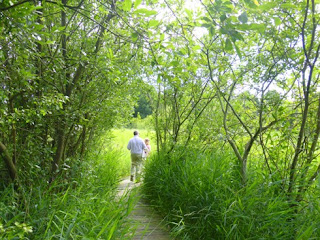 Much more to come some time after the big day. Chronicle of last year's walk is here, with links back to 2008.
Posted by David at 11:35

Not an exact parallel to your churches versus refugee claims for support, but your comment does remind me of an episode during WW2 when it was suggested to Churchill as PM that money could be better spent on the war effort than on the arts ( not that the expenditure on the arts was very large at that point, but there was some)

"And what " answered Churchill " do you think we are fighting for?"

That I like, thank you very much, Sir David.

We have been to Cromer & environs, I think, though were the Edu-Mate here, she might disabuse me. I love the photo from the cliffs, and DD's story is definitely a keeper.

I think my comment may not have registered (not that it was earth-shattering). I don't remember now what I wrote, but the Edu-Mate has since confirmed that we've spent time in and around Cromer, as I thought. This is such a beautiful part of the world, and the churches you're walking for are well worth preserving.

Patience, dear Susan: it is precisely because we were in the wilds of North East Norfolk that your comment couldn't be published until we got back. But I can report that despite gloomy forecasts of solid rain until 4pm, the sun came out by noon and the rest of the day was glorious, from Cromer - which notched us up a fair few churches of various denominations - along the coast to Trimingham, then inland to the last and greatest glory, Trunch, and back to Southrepps. Today two of us swam at Overstrand, and the temperature was more than bearable.

This was my first glimpse of Cromer's faded (but apparently rejuvenating) charms. I liked it a lot, even in the early rain.

Oh, of course, I should have realized! So glad the sun came out for you early, and I look forward to photographs of your walk.