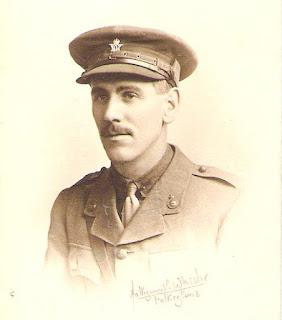 Exactly a year ago, on Armistice Day 2014, I shared what I'd only recently found out about my paternal grandfather, Captain George Nice. As I wrote then, my father never brought so much as a picture of his dad when he married my mother, so my cousin's box of photos and medals revealed Cap'n George's face to me for the first time, as well as his Croix de Guerre and a mysteriously sourced iron cross.

Two people have been in touch as a result. One was medal collector Barney Mattingly, who has written several interesting articles on the Fifth Dragoon Guards. 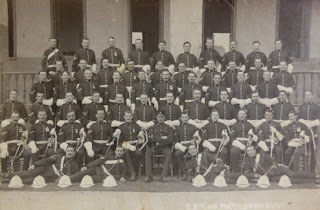 Though I should, of course, have gone and looked at my grandfather's records in the National Archives, Barney's information was helpful to clarify that Captain George entered the "Great War" on 16 September 1914, served in France throughout - until 11 November 1918 - and served with his regiment, first the Seventh and later the Fifth Dragoon Guards, until 12 August 1921. He went to Palestine, as I knew already, and was a trainer in horsemanship, seen here in baggy white trousers in Colchester in 1919. 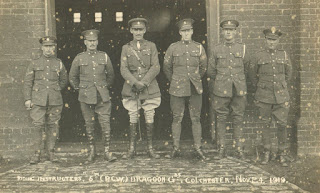 This is one of several more photos I'd never have seen had it not been for a surprise contact, Helen Barrull, director of the Jairo Barrull Flamenco Company, whose step-grandmother Brenda Elva Tomkins had died, leaving a legacy to a sister who unfortunately died just before her. Helen had been amazingly diligent in tracking down all known relatives - Brenda had 11 aunts and uncles on the Tomkins side, and 10 on the Nice side. My cousins have been elusive to find, but the legal process is underway.

Whether it yields anything or not legacy-wise is, so to speak, immaterial contained to the revelations with which Helen furnished me. And it probably won't, since my grandfather turned out to be first a King, and only a Nice when he took up his stepfather's name on joining the army some time in the late 1890s or early 1900s. His half-brothers and sisters assumed he was a full sibling.

He was born in Lexden, Colchester, in 1882, the illegitimate son of 18-year-old Esther King, a housemaid - so presumably his paternal name will never be known: could it have been a master or another servant? Impossible to say. Esther married George Nice in 1886. While serving in South Africa, her son tracked down his maternal grandfather in an internment camp during the Boer War; the man later died in a Salvation Army Hospital out there.

While my father was alive he never mentioned a brother, George, who died of tuberculosis as a young man. Now Helen had discovered the death certificate of another sibling, Phyllis, who was only eight months old when she died in Abbassia, India - not long before my father's birth in Secunderabad in 1912. Here's another extraordinary picture furnished by Helen of my grandmother Elizabeth, nee Wass, daughter of a mariner, holding my auntie Edith. 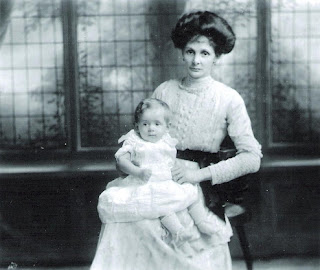 Other than that there's not much more to add so far, except one more picture of my grandad putting another dragoon through his horse-paces while in Egypt. 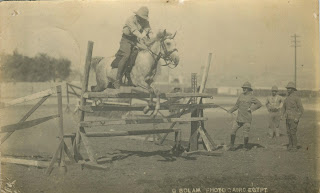 As I wrote a year ago, the mind runs riot when confronted with unexpected fragments of a family jigsaw. So I can well understand how Patrick Gale, a gripping story-teller, made a gay romance out of his great-grandfather's unexplained exile to the Canadian prairies in A Place Called Winter. I'm two-thirds of the way through, and while it may not have the deepest psychological depth, it certainly constructs a world.

Later: two pertinent photo footnotes. First, this amazing image of 650 officers and enlisted men from the cavalry in 1910 - could then Second Lieutenant George Nice be among them? - forming a horse's head. 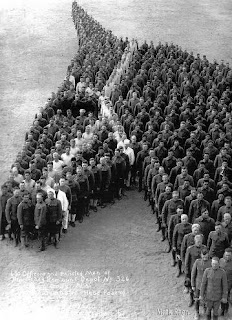 With hindsight, it could be seen as a prescient memorial to all the horses who were killed in the First World War (of a million, 65,000 came back, and another figure suggests eight million horses were lost on all sides). I hope the source, the valuable educational side Hungry for History, approves me appropriation under the circumstances.

And as a sign that life goes on, here's a NASA satelllite image of India, the land where my father was born a child of Empire in 1912, all lit up for Diwali on the night of what we know as Armistice Day. 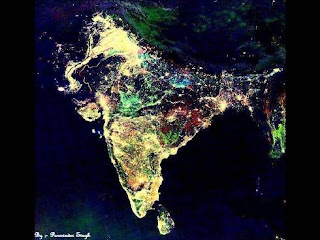 How wonderful to have been able to put even these pieces together, and with photos, too! Of course the name "Mattingly" caught my eye. I'd not given a thought to the name's derivation, but turns out it's old English: "Mattingleah ‘woodland clearing (leah) associated with (-inga) a man called Matta’." That your grandfather served in France from 1914-18 and came back alive is remarkable to contemplate.

Indeed, Sue, though he paid a terrible price for it - one of the few things I'd known about him before the photos and medals came to light was that he'd been an invalid because of mustard-gas poisoning. Clearly he carried on serving for three years after the war, but it can't have been easy for his wife and children in the last two decades before his death. That letter of sympathy to his widow I quoted in the first entry movingy suggests how he bored it all with fortitude. But my dad was a stiff-upper-lip sort of man too.

I find the comment about the Iron Cross of interest. In WW2 as the Allies over-ran Germany lots of Iron Crosses were found, especially since Hitler rather scattered them around to soldiers as the war began to go badly for him. Piles were found in the ruins of the Chancellery. But in WW1 when Germany was not over-run, I suppose that the only Iron Crosses to be found were on dead Germans. I do not think that we would have taken decorations away from captured Germans, though the French might have done so. Hitler himself was awarded the Iron Cross, First Class, an unusual award for a corporal, and he wore it proudly for the rest of his life. Ironically, it was awarded to him on the recommendation of a Jewish officer

Indeed, d - speculated that the iron cross would most likely have come from a dead German on the battlefield, though someone contested that by wondering whether medals would in fact be worn in the field.

Fascinating to read these family stories of yours. Those old photos are wonderful and it brings it all to life. Very happy for you and hope you find out more.

Just think, Laurent: if I hadn't written the first piece, I'd probably not have heard from my second coz and never known my grandfather's unusual provenance. It's probably time to find out more about the Parrises, though we know the Huguenot provenance on that side.

Hi. My great-great-grandfather Daniel Casey fought in the 5th Dragoon from December 1914 until the end of the war. He wrote memoirs about his experiences. You can find them available here if you are interested: http://danielcaseyww1.blogspot.co.uk/

Fascinating, Dave, thanks so much for writing. I'll look at those at leisure and report back.

You're welcome. I need to update some of the footnotes on it based on more recent research since I posted it.

Dave - I wish I'd returned to comment before, but what an evocative and often horrifying picture your great-great-grandfather paints. And what a wonderful place the web is for lodging eye-witness histories such as his. Thanks for taking the time to put it all online.

You said your grandfather started out in the 7th Dragoons and then transferred to the 5th. Do you know around when that happened? I remember from my research that both regiments operated together at Arras in 1917.