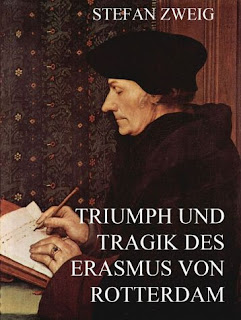 He always gets to the dramatic heart of things in his 'popular' biographies, does Stefan Zweig. The polarities clearly chime with his own divided soul in one way or another. His Erasmus study, not easy to get hold of these days, is both more brief and more reserved than the Marie Antoinette quasi-novel I read a couple of months ago. It even takes rather a long time to get over the faint whiff of the platitudinous in setting up Erasmus's virtues and flaws, his 'ambiguities and contradictions,' but once Martin Luther appears on the scene we know we're into material which would make an exciting screenplay.

'I must insist,' writes Zweig, 'on the facts that Erasmus of Rotterdam was, of all the writers and creators in the West, the first conscious European, the first to fight on behalf of peace, the ablest champion of the humanities and of a spiritual ideal'. But the 'universal language' he expressed himself in was Latin, and he remained an elitist, neither understanding of the ordinary people nor aware that the path of Enlightenment which he took could be upturned by the barbarism that lurks in human nature. 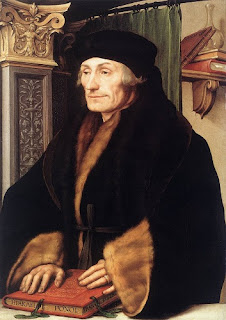 You feel Zweig is talking a bit about himself and his times here; and his knowledge of Freud convinced him that there was no steady progress in humanity. For both himself and Erasmus, 'an aristocracy of the spirit' could be swept aside, and not just by the unlettered:

An educated man, a civilized man - and herein we see the tragical failure in their [the humanists'] reasoning - was no longer capable of resorting to gory violence, and when once the educated, the cultivated, and civilized got the upper hand, chaos and brute force would inevitably disappear, and war and persecution of opinions would become anachronisms. In their overevaluation of the effects of civilization, the humanists failed to take account of the basic impulses and their untamable strength; in their facile optimism they overlooked the terrible and well-nigh insoluble problem of mass hatred and the vast and passionate psychoses of mankind. 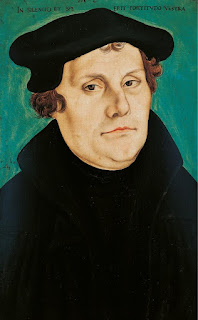 The representative of that, for Zweig, was Luther (Cranach's portrait of him in 1529 pictured above), 'an emanation of the dark, daimonic forces of the Germanic peoples'. Erasmus and he were opposite poles: 'the conciliatory temperament as opposed to the fanatical, cosmopolitanism against nationalism, evolution versus revolution'. 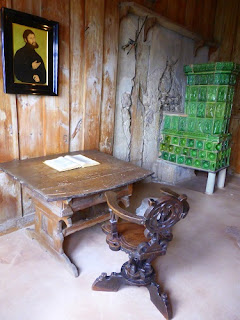 At the midway point of the biography, Luther in all his crude vigour and energy - his study in the Wartburg above Eisenach, snapped on last year's unforgettable Bach pilgrimage, pictured above -  takes centre-stage: a potential force for the good, flawed by intemperance and irrationalism, sure that 'my confidence is God', 'a cheerful and friendly father and house-master' who 'as soon as battle was joined...was transformed, becoming a werewolf raging with uncouth and unjustifiable scorn and fury', a 'hot and mighty hater' who never 'put in a word to save an enemy condemned to death'. 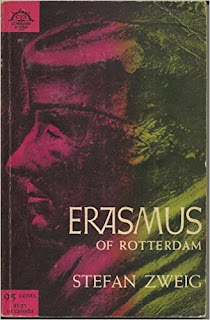 There are dramatic points of no return and moments where if Erasmus had become more involved and Luther less intransigent, Europe would have been spared the tide of blood.

Even when the battle was joined, Erasmus, the peacemaker, went a long way to meet his opponent. He took occasion to warn his contemporaries not to place too great importance on such discussions, but, rather, 'to ask themselves if it is right to set the whole world in a conflagration for the sake of a few paradoxical conceptions' [the chief issue over which Erasmus and Luther had locked horns was the one of predestination].If only Luther would yield but the fraction of an inch, would take but one step to meet him, this intellectual squabble would end in peace and harmony. But could Erasmus hope for compromise from the most iron-minded man of that century, from a man who in matters of belief and conviction would not, even if tied to the stake, sacrifice a jot or tittle of his principles, who, born fanatic that he was, would prefer death or the destruction of the world to giving up the tiniest and most indifferent paragraph of his doctrines?

For Erasmus, even the refuge of Basel where he had found true acceptance and tolerance and where he would be buried 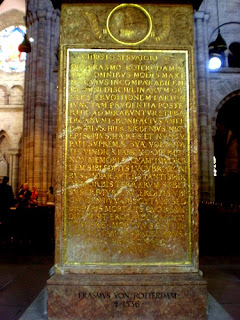 was not immune from Reformation fever. That beautiful city is once again a centre of enlightenment and harmony, more outward looking than other Swiss centres of excellence; our trip there first put me properly on the Erasmus trail. 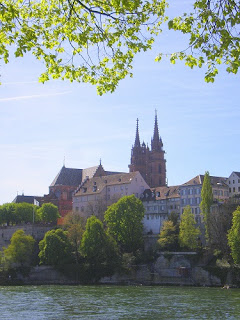 Yet Zweig's epilogue carries the grain of hope at the bottom of Pandora's box, in his argument that 'no thought that is the outcome of the fusion of clear thinking with high moral energy can wholly disappear':

An idea which does not take on material shape is not necessarily a conquered idea or a false idea; it may represent a need which, though its gratification be postponed, is and remains a need...Those ideals only which have failed to put on concrete form are capable of everlasting resurrection.

Resurrection: is it a metaphor or a parable in Christianity? On that, and on the issue of miracles, I can't quite grapple with what my new friend the excellent Rupert Shortt has to to say in God is No Thing. In every other respect, I agree with him wholeheartedly on the essence of good Christian teaching, tolerant and respectful of other opinions, and on most of its tenets - but despite the overlap, it's still not enough to persuade me in to the fold. I like this:

An American historian and agnostic...summed up her diagnosis [of today's malaise of disrespect towards Christianity] like this: 'I've always seen Christianity as involving an encounter with the depths of experience,' she told me. 'Yet so many educated people on this continent [Europe] seem to associate it with nothing beyond the shallows.' 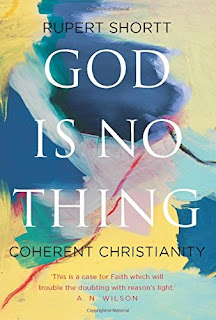 I believe, like Shortt and so many scientists (and Darwin, one of the best formulators of thoughts about the existence of God in his autobiography), that 'science...explains how this or that process has taken place, but cannot say why'. Neither first causes nor what people call God are nothing. Shortt quotes Denys Turner:

'Nothing' has no process, no antecedent conditions, no random fluctuations in a vacuum, no explanatory law of emergence, and, there being nothing for 'something' to be 'out of', there can be no physics, not yet, for there is nothing yet for physics to get an explanatory grip on.

Hence the book's title, and the title of the chapter in question, 'God is no thing, but not nothing'. I believe - this is turning in to a credo - in the likelihood of a numinous world beyond the phenomenal; how could I not, being in a constant state of bewilderment at the examples of creative and performing genius in my sphere? Let me share the epitaph Kurt Vonnegut wanted for himself - can't work out from this picture whether his wish was realised: 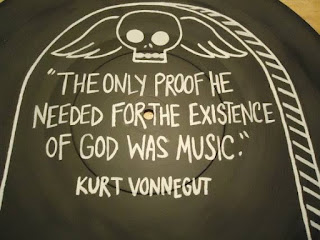 Vonnegut and Shortt both cite the Sermon on the Mount as one of the great texts, if not the only text you need for life. They're both immensely likable beings. So even if you're a confirmed atheist, I recommend you read God is No Thing - and don't let the recommendation from hack writer A N Wilson on the cover put you off. Pleased to see it's among the best sellers already.
Posted by David at 11:15

Clearly two incredibly thought-provoking books. It's chilling to think how often, as between "the conciliatory temperament as opposed to the fanatical, cosmopolitanism against nationalism, evolution versus revolution," the former is the loser. More than once (though this is perhaps due in large part to my own current preoccupations), particularly on reading your comments and Zweig's words about Erasmus and Martin Luther, our current situation here came to mind, and particularly an observation a friend wrote to me today:

"One of the things I am most interested in is how we as a nation, as a people, have arrived at this point where we are so ready and eager to abandon the rational consensus of the professional classes (government, science, economics for example) forgetting the huge benefits derived from these enterprises, turning instead to the raw promise of the heart, as in ‘'something to believe in”. Trump and to some extent Cruz are the most obvious examples where they deliberately stoke the irrational fears of those who have cause to be fearful. Fear is probably the easiest way to short-circuit reason but so does love. Physiologically they are quite similar in the way the autonomic system takes over and damps down the rational powers of the critical thinking process.

"Sanders is much more benign, salutary and incisive even, but when you raise hope by magical undeliverable promises, you leave the followers of that hope hanging by a thread. When that gossamer strand is severed by the intrusion of reality not only does the hope crash, but with it the rationale which gave rise to that hope becomes tarnished and damaged, perhaps beyond repair."

It's hard to know what the solution is--though, actually, in thinking about what Zweig has written, there is likely none, but only cyclical plummeting into the dark and, hopefully, rising up again.

Your friend's observation is on the same eloquent level as Zweig's prose. I love 'the raw promise of the heart'. Obama, who we all love more than ever, recently made an equally language-rich statement about the barenness of losing the plot politically and depending on the emptiness of 'personality', the legacy it gives (or doesn't) to the next generations.

At least Erasmus and Luther both had the power of conviction. Whereas now it's Yeats's 'the best lack all conviction while the worst are full of passionate intensity' (our hollow Brexiters who I can't believe were allowed to put us in this ridiculous position).