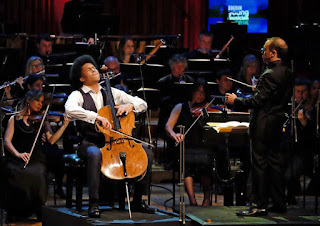 Finally caught up with the BBC Young Musician 2016 finale on the iPlayer, watching in segments after evenings out on Thursday and Friday, and it was blindingly obvious: 17-year-old Sheku Kanneh-Mason's performance of Shostakovich's First Cello Concerto with Mark Wigglesworth conducting the BBC Symphony Orchestra was one which would go straight to top of any year's best list, regardless of the circumstances. All Young Musician 2016 images by Mark Allen/BBC. 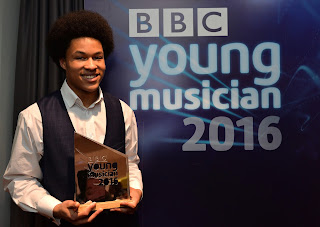 It baffles me how this sweet, seemingly diffident teenager becomes a channel for everything I've ever thought the music was about the minute he applies bow to cello. He can change colour as well as dynamic on a note. Above all the big cadenza just spoke to us like the great Shakespearean soliloquy it is (have never forgotten Oistrakh's characterisation of the solo role in the First Violin Concerto as Hamlet-like). Spellbound by all this, and seeing it all in SKM's face, it was easy to overlook how he had the best partners in the world. The wind in the first movement were uniquely bouncy and spiky, the Wigglesworth touch as we know from his Shostakovich symphonies cycle, and as Julian Lloyd-Webber pointed out, the crucial horn solos can never have been better played (kudos to the fabulous Nicholas - not David, Clemency, please - Korth).  Here's the whole thing on YouTube, courtesy of the justifiably proud father. Two minutes from the official BBC site is not enough.


No less communicative was the delightful saxophonist Jess Gillam. Only two problems about the final here, for me, at any rate - the shortage of great saxophone-and-orchestra pieces, which meant we got the quickly numbing Nyman Where the Bee Dances; and the amount of time you can listen with pleasure to the soprano sax (for me, at least given the score, not very long). Below: Gillam on the left, with wise mentor and former winner Nicola Benedetti second from right). 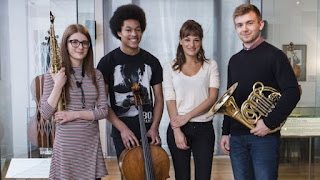 As for fine horn-player Ben Goldscheider (above on the right), the only face on the screen who spoke truth was Wigglesworth, in declaring that it was the most difficult of all instruments - and I would add, the most difficult to play smoothly when you're nervous. And why wouldn't our finalist be nervous? It seemed as if the splendid Sarah Willis, horn-player with the Berlin Phil and a presenter so good I've already asked if we could see her on the BBC, had been gagged into singing only praise, so I did a double take when she said how supremely relaxed he was. Not so. Surely an expert can make critical points without undermining the essential fabulousness of it all?

Anyway, Barenboim has taken Goldscheider under his wing, so he'll be fine. As will the other two - and I want to see more of the incredible Kanneh-Mason von Trapps, instrumentalists all (the parents are pianists). Here they are playing the most famous of the Brahms Hungarian Dances.


There's going to have to be an hour-long doc on the Kanneh-Masons. But on BBCs One or Two, please; it's a disgrace that this antidote to Eurovision appeared on ghetto BBC Four. Apparently the family did get to the semi-finals of Britain's Got Talent, but I wouldn't know about that, would I? And semi-finals only? Please.

Saw all too much of Eurovision on the TV in our Prague apartment - all I have to say is that Jamala, the winner for Ukraine with 1944, was worthy not so much because of her origins as Crimean Tatar but because she was the only one to connect with what she was singing about in a risible show of artifice and overkill. 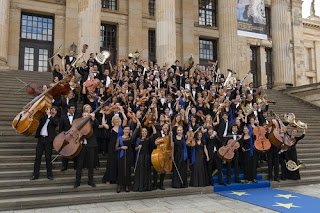 To conclude, an outcry and a celebration. It's right that there has been horror at EU withdrawal of suuport for the European Union Youth Orchestra (pictured above). They shouldn't have to compete with other organisations for funding; they ARE the musical flagship of the Union (and a great orchestra by any standards, as their stunning 2014 Prom showed). True, other organisations like the Chamber Orchestra of Europe and Gustav Mahler Youth Orchestra raise their own money. But - repeat - it's fundamentally wrong that this most splendid of ensembles should have to go through the bureaucratic hoops for their survival (or, in this case, their demise). In the meantime, you can sign several petitions: try this one on Avaaz. 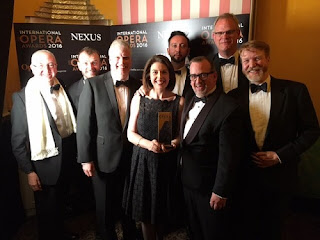 Congratulations, finally, to the ENO Chorus; having garnered one trophy at the Olivier Awards, they sealed their worldwide credentials by winning at the International Opera Awards. And this time the right people were there to claim the trophy. Deborah Davison of the Chorus (in the centre with the award in the above picture) gave a superb speech, putting much of the credit where it was due here:

The ENO chorus is an extraordinary and passionate group of artists who form the essential lifeblood of our ensemble company. Through good or challenging times, our desire to be the very best we can never wavers and we are thrilled and immensely proud that our work has been recognised in this way.

On behalf of the Chorus, I'd like to thank four people who have been instrumental in our recent work. Our indefatigable Chorus Manager, David Dyer, a man who embodies everything that is great about ENO. Our brilliant and inspiring Chorus Master, Stephen Harris, and superb Assistant Chorus Master, James Henshaw, who have lifted the musical excellence of the Chorus to an all time high. And finally our much loved and respected Director of Music, Mark Wigglesworth, a man of immense integrity and unparalleled musicianship. We have been honoured and privileged to make joyous music with him.

Amen to that. Got a little moist-eyed transcribing it. Fingers crossed that this relationship proves too strong to be thrown away permanently.
Posted by David at 12:25

Thanks for the GooTube link David. I've been meaning to catch up with the Young Musician final for a while but just haven't... but it will be on R3 for a month as well I think. I was going to remark on someone who said recently on the radio that DSCH was his favourite composer, but I can't remember who it was.

Also meaning to catch up on your Enescu review which I just saw posted on FB, or rather reposted by Ana-Maria Avram, a Romanian composer who is a friend of a friend. I don't know Enescu's work but gather he must be to Romania as Bartok is to Hungary, or something like that. Lots to look forward to! Not to mention Ilan Volkov from Glasgow last Saturday and next!

Yes, Howard - the entire telly finale will be on the iPlayer for a while yet. Don't think Shostakovich could ever be my favourite, because I associate 'favourite' with love and warmth, but no-one does what he does more awesomely.

Yes - Enescu is on the Bartok and Martinu level; Szymanowski for Poland not quite up there, I fancy. But chats with one of the cast have pinpointed certain problems with the pacing of Oedipe Acts One and Two. If there are any tickets left, they're cheap - recommended that you and C catch it for the one and only time it's likely to be on here.

I wonder if I could suggest that the masks of comedy and tragedy are the same, it is just a matter of which way one looks at them. Or in simple language, in the face of the human predicament one does not know whether to laugh or cry. So Dostoevsky and Emily Bronte can stand on the same shelf as Jane Austen and ( if I am allowed to say so ) P G Wodehouse. Or who you will. I appreciate that to say that some music is not a favourite ( rather than not in a list of your great works) because it lacks love and warmth is a valid choice.

One of guys running a leading music programme on the BBC commented some time ago that he was surprised that so many of the people he interviewed chose " sad" music. When I realised that he meant music with a tragic dimension I lost all confidence in his judgement

I take all your points. Yes, I would place several Shostakovich works on a list of very great works without, say, loving them so much that I'd want any played at my funeral, for instance, where I think a certain light would be needed. Though as I've discussed with my favourite musical pal Stephen Johnson, the cautious optimism at the end of the Eighth. Thirteenth and Fifteenth Symphonies is very special indeed after all that anguish.

At the same time, I think bright music, even comedy, is too often put on a lower rung than the tragic, which is odd in the case of operas like Falstaff or Der Rosenkavalier. Here, 'in the face of the human predicament, one does not know whether to laugh or cry'. That also pertains to the Scorsese movie we saw last night, The King of Comedy starring Jerry Lewis, Robert de Niro and the equally vital Sandra Bernhardt where laughter, pity and terror are closely interwoven. For me Wodehouse lacks the occasional shaft of profundity which should IMO go into every great comedy, but that's a personal take.

I agree about Wodehouse ( Waugh had sometimes a similar style but with that extra shaft of profundity)......nevertheless there is something about PGW's best work which is more than beautiful English and more than just humour. It is perhaps, as either Waugh or Bellow put it, that the Garden at Blandings Castle are the Garden of Eden, in which there has been no fall of man, from which we are for ever excluded. I wish I could work it out properly

Kanneh-Mason's performance, with Wigglesworth and the BBCSO, gave me the sense of a first, rich discovery of a piece I thought I knew quite well. You're absolutely right about the EU Youth Orchestra, of course. These young people are our hope for the future, as the Kanneh-Mason "von Trapp" performance demonstrates so brilliantly also. And bravos and bravas to the ENO chorus, too. How is it that so many can fail to understand that the arts are our best and highest goods as humans? (Of course the question is entirely rhetorical, but I nonetheless continue to despair.)

So much trouble stems from putting accountants in charge (though if ENO had had a good one to work alongside the Artistic Director, they might not have got into much of this financial mess). Certainly the artistic policy is weaker than ever at ENO now - wonder if Kramer can do something, he hasn't had a chance yet. But it struck me as very poor judgment to allow the rehearsal 'preview' film of the forthcoming Tristan to go up on The Guardian - I fear for Heidi Melton if that's a reliable indication of how she's singing now.

And yes, I felt completely charged up anew by the Shostakovich - usually I much prefer the Second Cello Concerto, but this had more depth than I'd expected.