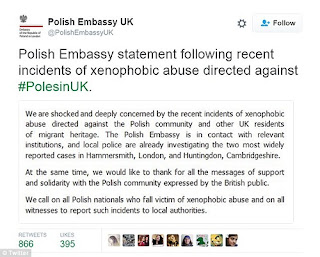 So my best barometer of what's happening to anyone who’s come to live, work and pay taxes here in the UK is my friend Magda, who also happens to be our hard-working and superbly well-organised cleaner.I ask her every Monday if she's had anything adverse happen to her or to anyone she knows.

The pressure is clearly mounting. At first she only recorded two official problems. Her niece, recently arrived from Poland, was turned down for working at Pret a Manger because they said they were uncertain about the situation post-Brexit. She actually got a job at Wetherspoons (ironically, since the owner was/is fiercely pro-Brexit. Yet the company has explicitly stated that it will carry on employing Eastern Europeans). To get her National Insurance number she went to the local Job Centre. The woman there was hostile and sarcastically incredulous – ‘you’ve only been here ten days yet you have somewhere to live and a job?’ – and didn’t put down on the form that she had a job but that she was applying for one. 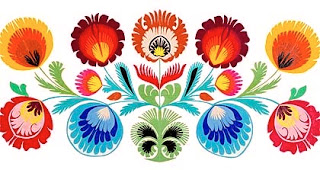 Today's news was worse. The 8-year-old daughter of one of Magda’s friends has been traumatised by an incident on the 41 bus from Tottenham Hale to Archway. She was travelling to a Polish Saturday School with her parents, three friends of the same age and her three-year-old brother. She speaks English with her schoolfriends but her brother is too young to communicate other than in Polish. So they were speaking their own language as they went to get off the bus at Crouch End when a couple in their sixties said 'why are you still here? Go home! Fuck off back to Poland.' The rest of the people on the bus did/said nothing. Olivia wants to know ‘why do these people hate us?’ and is sufficiently upset not to want to go back to Saturday School.

Magda says that about 20 per cent of her friends have gone back to Poland, including a friend who ran a hairdresser's but has closed down business. They are afraid not so much for themselves but for the kind of hostility their children face at school. 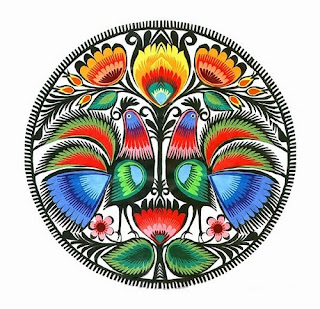 I wanted to believe these incidents were isolated, but when they're directly reflected in the lives of the Poles I know, I fear it has to be commonplace. So I'm disgusted and feeling helpless. But I've reported the incident - three hours later the police arrived to take details, and the rest will be up to Magda's friend - and the more people do so, the more we stand a chance of stamping out the apparent licence to abuse which Brexit - with the help of the right-wing press, shame on them - has unequivocally encouraged. If people only do what they did before, think vile things but keep them to themselves and their circle, less people will be hurt or, worse, murdered. It's a minority, but it's enough to drive these admirable folk away.

An afterthought - I'd forgotten about this one: how about something from the Ukippers' misplaced idol Elgar? His Polonia of 1915, a perfectly fine occasional piece composed to support Polish refugees... And it will teach you the Polish national anthem into the bargain. Sad to report that beleaguered country as a good deal worse than us on its current record for taking in refugees. None of the leaderships of the so-called Visegrád Group within the EU is good, and Hungary's is marginally worse than Poland's, but that's not saying much.


Invitations to comment are usually met with a blank, but if you know of anyone - Polish or other - who's been affected like Magda's friend, do write about it below. It's important to have these things documented.
Posted by David at 08:58

I find it difficult to understand anti -Polish xenophobia They and the immigrants from other EU countries come from a culture steeped in Christianity, and look and act in a way that does not mark them out. Whereas the hundreds of thousands who arrive regularly from outside the EU include many whose culture and behaviour are different from ours, and can therefore give rise to a reaction against a culture seen as upsetting traditional values , a reaction that has to be handled. I cannot see any reason for anti-Polish ( etc) feeling except the ghastly press, who seem to take against all foreigners but I suppose that there must be other factors

It is also important to stress that the culture and behaviour of many among the thousands 'who arrive regularly from outside the EU' are NOT markedly different from ours. If only the stories of the many cultured Syrians could be told - many, of course, are Christians too. Not that it makes xenophobia against the culturally (I would reject behaviourally) different in any way acceptable.

It's true that there are areas where the Polish influx is very marked (though as a programme on job-swapping in Spalding proved, they bring nothing but value and hard work to the community). So in those places the resentment can be very pronounced.

This, though, is in London, which we like to see as a little mini-Europe (nay, globe) within the UK under the strong leadership of Sadiq Khan.

I agree totally with both Davids and I too cannot understand these anti-Polish feelings. I like to believe that these bad incidents are relatively few but - quite rightly - they get a lot of exposure because they are so unforgivable. I also still like to believe that most Brits are decent people and not racist or even particularly xenophobic. Perhaps we should feel pity for people who are hateful to Poles because of their stupidity and ignorance: Poles are highly educated, hard-working and - as David Damant says - Christian so we should welcome them with open arms as brothers and sisters. One thing I shall never forget: there were 16 Polish RAF fighter squadrons in WWII and they were outstanding. Their 303 Squadron was the highest scoring of all the RAF Hurricane squadrons during the Battle of Britain. We owe them.

Thanks for those observations, Jonathan. The really awful thing is that Poles in this country have had very little trouble since they started coming here after the Second World War. Until now. As if Brexit gave the minority the cue to express so hatefully what had gone underground. Though I do remember the awful murder which took place some years back, just around the corner from where I live, of a Pole who worked in the big hotel here, celebrating his 21st birthday with friends in the little open space opposite. Still haunts me.

It's also horrifying that so many of the older generation who voted Leave can remember the horrors of the Second World War in which the Poles supported us so valiantly, and how the EU sprang up to maintain peace. Sheila Hancock's magnificent two-minute speech on Question Time still resonates as one of the most powerful of the entire campaign.

The hatred that has been unleashed by Brexit--with so many parallels to what we are experiencing in the US--is as despicable as it is horrifying. Your comment, "If people only do what they did before, think vile things but keep them to themselves and their circle," reminds me of Laurie Penny's heartrending piece post-Brexit: "This Britain is not my Britain. I want my country back. I want my scrappy, tolerant, forward-thinking, creative country, the country of David Bowie, not Paul Daniels; the country of Sadiq Khan, not Boris Johnson; the country of J K Rowling, not Enid Blyton; the country not of Nigel Farage, but Jo Cox. That country never existed, not on its own, no more than the country the Leave campaign promised to take us to in their tin-foil time machine. Britain, like everywhere else, has always had its cringing, fearful side, its cruel delusions, its racist fringe movements, its demagogues preying on the dispossessed. Those things are part of us as much as beef wellington and bad dentistry. But in happier times, those things do not overwhelm us. We do not let bad actors reading bad lines in bad faith walk us across the stage to the scaffold. We are better than this." I think of her words often, as I now will yours, as events continue to unfold here.

The Paul Daniels bit struck me as odd - assuming the reference is to the deceased magician, who seemed harmless enough. And I don't know that Rowling is so superior to the most imaginative of Enid Blyton, whose Faraway Tree books still struck me as magical when I read them to my three year old goddaughter a long time back. But I take the general point. And I do still cling to the idea that this is a small minority, but enough to drive the Poles I know out of the country. The bullies can't be allowed to win.

David: Good point, and, you know, I didn't know many of those references or pay much attention to them. It was indeed, Penny's overarching point you note that I found so moving. This all reminds me, too, of a recent subway trip. I had baggage, as I was coming in from upstate, and a young man of color and a young woman wearing a hijab each offered me a seat. While I declined, I looked at them both and said, "How kind everyone is." The young woman gave a smile so broad and heartfelt that I sensed she'd too often been treated with meanness and hatred. It's unforgivable, and yes, the bullies cannot be allowed to win.

There was also a wonderful piece of reporting yesterday on a lady in a hijab with a family who was going to be evicted from her Bristol home because she'd complained to the landlord about the terrible rising damp. 30 of her neighbours, Brits of all colours, surrounded her house in a human chain so the eviction couldn't take place. So this is happening often too, and in London we do seem to live in mostly multi-culti harmony. Probably why I was especially appalled by what Magda told me.

Coincidentally, on the packed train back from Kew this afternoon a young hip guy gave up his seat to a very surprised-looking middle-aged woman.