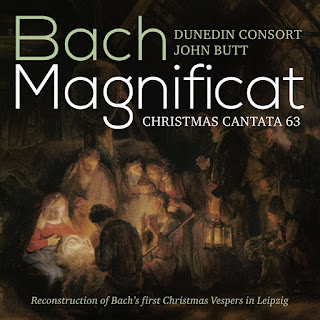 There's only one CD you need for the happy morning, and I've just been blown away by it. I blush to say it was sitting in the great pile of to-be-heards, but after Monday's only half-satisfying Bach concert from the Monteverdi Choir and the English Baroque Soloists under Gardiner, I needed to listen to the most blazing of all Magnificats again. This performance, like Gardiner's, uses the original E flat major version with Christmas interpolations, and it goes further - attempting to reconstruct Christmas Day 1723 in Leipzig's Nikolaikirche.

That means the brilliant John Butt and his Dunedin Consort launch exhilaratingly in to Giovanni Gabrieli's Hodie Christus natus est before giving us Bach's Cantata Christen, ätzet diesen Tag - the only one with parts for four of those silvery baroque trumpets - as well as several organ preludes and a thrilling congregational chorale version with organ improvisations in between the lines on Von himmel hoch. 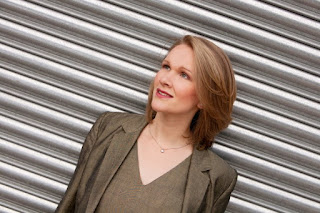 What quickly became clear - in the Magnificat, as soon as the first solo, 'Et exsultavit' - is that Butt likes to use soloists of real character who also sing in the eight- or ten-strong choir; two of Gardiner's to-the-fore sopranos, tenor and one of the basses seem in retrospect to have been all the more inadequate alongside singers here capped by the wonderful Joanne Lunn (pictured above by Andrew Redpath), with her distinctive and carefully applied vibrato just right even for the choruses. She's also the star of the more recent Dunedin/Linn Christmas Oratorio, which I also listened to, all six cantatas in sequence, more or less at a single sitting. Gardiner's Archiv classic is never going to disappear from the shelves, not least because of Anthony Rolfe Johnson and Anne Sofie von Otter, but again there's refreshment from the small choral forces used here. 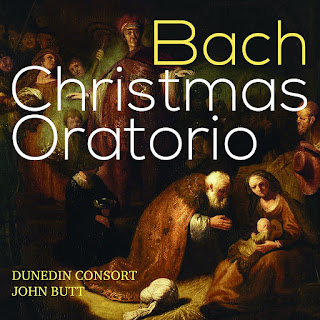 Besides, quite apart from my ignorance of too many of the cantatas, I blush to say I never knew the Magnificat as well as I should do until Monday. A sheer live hearing of it was miraculous enough to keep any of the passing (solo) disappointments at bay. And on Tuesday I heard the St. Lawrence String Quartet play Haydn's Op. 20 No. 2 in C major for the first time live: it knocked me for six, especially the 'Capriccio' Adagio, much more than John Adams' new String Quartet No. 2. Found a performance almost on the same high level from the Quatuor Mosaïques, so here it is: probably best to listen to the whole of the first movement so that the shock of the second properly registers, though if you've only time for novelty, go to 10'13.


So much great music to hear, so little time to hear it in. Again, I'm reminded of Shostakovich commenting on the Borodin Quartet's championship of the Soviet new 'but have you played all of Haydn's quartets yet?' Have I listened to all the Haydn quartets and all the Bach cantatas yet? Not by a long way, though I have fitful spells of trying to rectify the situation. If only I could play a stringed rather than a wind instrument, and go off and try the quartets out with friends.

In the meantime, here's a very cannily put together film giving the background to the  Christmas 1723 disc. Full marks in that it starts off with one of the most original numbers in the Magnificat, the 'Suscepit Israel' for two sopranos, alto and first trumpet.

Greetings, David, and I concur. It's almost too easy for us Edinburgh folk to forget how lucky we are to have the Dunedin. Back in October they did Fantasy and Madness, a fantastic jeu d'esprit of Purcell, Shakespeare and Cervantes - in Edinburgh, Glasgow and Mexico.

Lucky you, Catriona, I've only heard the Dunedins live once, at the East Neuk Festival, and the whole thing was very much enhanced by John Butt's little speeches. That sounds fascinating - presumably along lines similar to the Don Quixote programme I heard given by the English Concert with Purcell in the first half, Telemann in the second, possibly even more ingenious. Butt has done such good work in putting together the 1723 programme. On the strength of it, there's no ensemble I'd rather hear in Bach cantatas at the moment. I hope they can come up with more programmes of this ilk.

Hope to see you in February when I plan to be up for Neeme's 80th birthday Tchaikovsky with the RSNO.

The Dunedin Dublin Messiah has become my favourite (I blush to admit that the old Beecham recording runs it a close second but we all have our guilty pleasures)and of course your recommendation means that I am going right over to iTunes and downloading the Bach. You are always making me spend money but then it's always well spent.

In this case, gold for gold. You prompt me to get that Messiah, too. I need a new one.

After delighting for years with Messiahs with original forces, counter tenors etc, I sometimes have a yearning for the Full Works as provided ( at least in the past) by the Huddersfield Choral Society

PS and for the avoidance of doubt - the word 'fantastic' is used in the fourth meaning of the word in my Chambers 21st Century dictionary and not the first, slangy meaning.

I should not expect one who embodies the better aspects of Jean Brodie to be less than precise in her use of vocabulary (and I nearly wrote 'would' there...)

Oh, and Sir David, you noticed that Willym also references the Beecham. Someone reminded me recently that the revered Michael Tanner's favourite Bach St Matthew Passion is Klemperer's, and after spending so much time with his hyper-alert, leisurely but never too slow (for me) Mozart, I'm encouraged to get hold of it.

Was also longing for Karajan's B minor Mass if only because I remember the flutes in the 'Domine Deus' as uniquely melting. I think James Galway must have been the first, as it coincides with his time at the Berlin Phil.