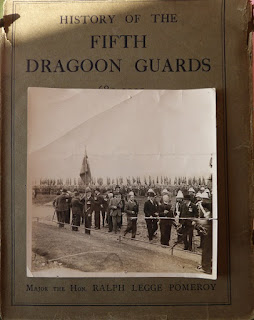 I did so for the first time on 11 November 2014, just after I'd learnt something about my paternal grandfather's history from my cousin Diana's collection of photos and medals; my father had never brought a single record of Captain George to his marriage with my mother. Exactly a year later I had more to post, not least the astonishing revelation that we are not really Nices at all; George Senior (my father, Cyril, took on that name after the death of a so-named brother from tuberculosis - another of dad's too-many secrets which we discovered only after his own death) was the son of a chambermaid who, several years after having given birth to him 'out of wedlock', as they used to say, father unknown, married a Nice and the boy took on his stepfather's name. We're really Kings - and who the real great-grandfather is, we'll probably never know. 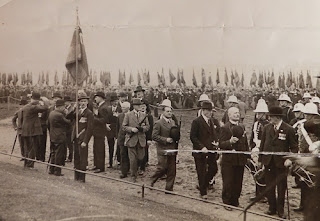 Anyway, the point is briefly to commemorate on this day the grandfather I never know, who died 20 years before I was born. The photo on the booklet is of Captain George holding the flag on a Remembrance Day some time after the First World War, probably on a field in France, but again it's difficult to date. He seems to be wearing more medals than the ones my cousin had in the box, including the croix de guerre and an iron cross acquired we know not how (their story is recounted in the first entry). 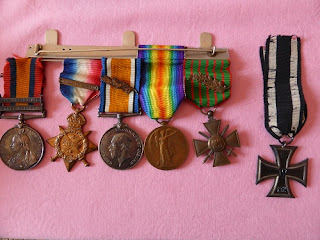 And one last reminder of the Dragoon Guard with his wife, my paternal grandmother whom I also never knew, and two children, possibly the older one the little girl who died in Egypt since she doesn't look like either of my aunts. 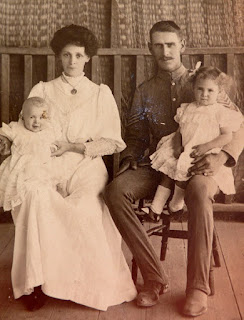 With time, hopefully, even more will be revealed. In the meantime, we will remember them.
Posted by David at 08:43

You are not alone in these ancestral uncertainties. Lord Melbourne, the 2nd Viscount and Prime Minister, was almost certainly not the son of the 1st Viscount, and Lady Diana Cooper was not the daughter of the 8th Duke of Rutland. If one goes further back though the generations one can only agree with Oscar Wilde, that the peerage is the best thing in fiction the English have ever done. And if that is true of the well documented and scrutinised aristocracy how much truer it will have been for us ordinary families?

Indeed - and I'm so curious to know who my real paternal great-grandfather was. Squire? Stable boy? Never to be known, I guess.

I'm sure so many people have similar histories, sometimes without knowing. I was telling some of the students about this over tea, and one of them revealed that she only found out on her 60th birthday that her 'father' wasn't her real father...