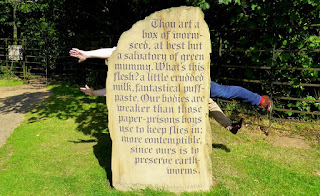 Meaning the he-I, only partly revealed in the above photograph in the grounds of the modern-art-rich Gunton Arms, North Norfolk, where we had a superb lunch to celebrate a birthday early last month in the middle of the equally flavoursome Southrepps Music Festival. We may have between us two feet in the grave, but I don't really buy in to Webster's cynicism. Anyway, the stunt is a good substitute for the fact that The Other won't allow full-frontals or facials other than this one (wedding photo 2015) on the blog.

Since 1988 we've been civilly partnered and married, to celebrate our rights, but our relationship began in Edinburgh while we were there performing Puccini's Gianni Schicchi on the Fringe with City Opera and the Rehearsal Orchestra. Edinburgh was, is and I hope always will be my city of love - unrequited over four years as a student (what pain that was), redeemed another four years later. 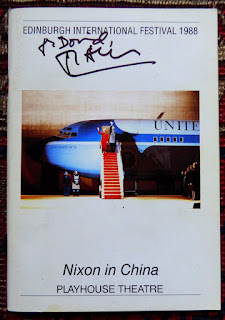 'Our' opera is either Schicchi or Nixon in China, the UK premiere of which we went to see around that time, other backgrounds being a visit to see university friend Eleanor Zeal's play that year, The Tainted Honey of the Homicidal Bees, based on the Greek myth of Erysichthon (Eric in her version), which won her another fringe first, after which we had J's sadly now erstwhile friend the Houri dancing up the stairs of the Annandale Street flat where I was lodging bawling 'I'm in love with a wonderful guy', and the Edinburgh Botanic Gardens, where a pledge was made. The above programme was signed by the great man some years later, when I got to interview him in a pre-performance event before he conducted the BBC Symphony Orchestra in a Barbican concert of his music.

Friends who were recently together back in 1988, my hosts in Annandale Street, are separated now but on good terms, and their lovely children are still partly ours (at least in my mind, anyway; we put in many intensive days of work entertaining them on visits to Scotland): Alexander first, chronologically, among godchildren, Kitty nominally J's goddaughter now.  Mother Julie has this heartstopping view of Arthur's Seat, complete with figures on top, from her kitchen window, 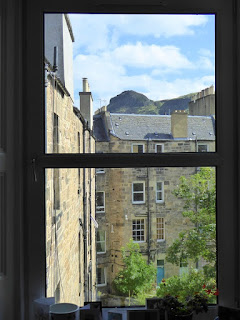 while Christopher still lives on the other side of this amazing valley in Broughton, between Peebles and Biggar in the borders, where we went for the first time in some years after our Edinburgh sojourn this year. 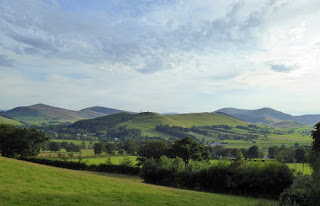 'Our' boy, Alexander, is now a hard-working twentysomething who's just bought his first modest property in Biggar with girfriend Kirsty. I hope he won't mind being the only face up for close inspection here, unconsciously but hilariously reflecting darling dog Lily's head-up with the ball at our picnic by Stobo Reservoir on our glorious four-hour walk from Broughton along the Buchan Way. 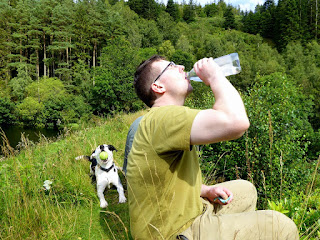 And here is said dog acting as substitute for the one I want, along with a garden, to complete our more or less contented life, outwardly ruffled at the moment by what happens to J's work should the European Commission Representation in London finally close on 31 October (but I'm still hopeful that it won't, probably a little more so after the first public response to democracy under threat this past week). We're both heading out of the confluence of the Tweed and Biggar Water on a gloriously warm weekend. 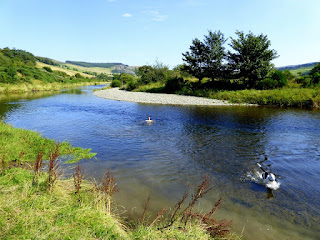 And here, continuing the tradition of anonymity for J, are my more feline companion and I heart-shadowing at Kew on Sunday 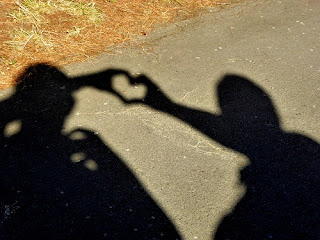 with blissful Mediterranean pine and sky directly above. 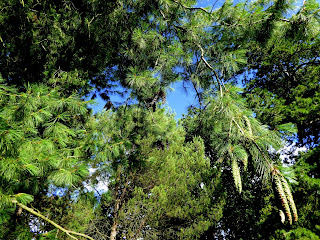 UPDATE: our evening should really have been dinner for two, but how could I miss Gardiner's Berlioz at the Proms? 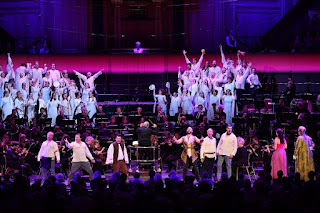 I blush to say I applied relentless pressure on J, who hates the Albert Hall audiences but loves good singing and all-round excellence in opera, and he got both, having amusingly pointed out that our anniversary night subject was, in real life but not in Berlioz's romantic portrait, a brawling bugger who constantly faced arrest for both the stabbing and the sodomy. Anyway, a more joyous occasion couldn't be imagined. 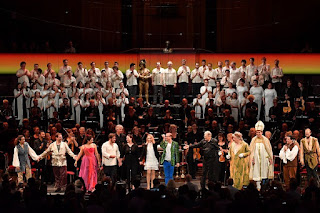 It was a giant bottle of champagne to Haitink's farewell concert last night, a wine of very rich vintage. 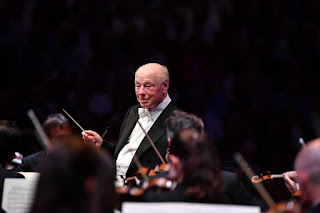 You can read about both concerts (five stars, natch) on The Arts Desk: Benvenuto Cellini here and the Vienna Phil special here. With thanks to the doyen of action photographers, Chris Christodoulou, for the photos.
Posted by David at 16:55

Oh, happy anniversary to you both! And we are pleased to see there is today some good news, with the new, horrible PM losing his first vote. May that continue, please, please. I love that Nixon in China is a candidate for “your opera.” It is, in fact, ours as well. We could not get over the topical content so gorgeously rendered. We didn’t know it was possible.

Thanks so much, Sue, now that there's one card on the virtual mantelpiece I'm happy (and I shouldn't panhandle - a couple of other folk I think will become friends made jolly noises over on LinkedIn). Our celebratory opera last night was Berlioz's Benvenuto Cellini in a large champagne bottle of a performance under Gardiner - I think it's to hit New York, in which case don't miss it. Haitink's Bruckner Seven with the Vienna Philharmonic tonight was a wine of very fine vintage. Left me clear-headed and slightly elevated, a mood which continued when I got home and found out about the Commons vote.

I would in this awful mess suggest that the real menace is not Brexit in itself but the prostitution of democracy that is being used to achieve the Brexit aim. And the British media is part of the mess - instead of looking at the methodologies that Boris and Cummings are employing they divide on whether they ( the media) support Brexit or not. The hysterical ( I use the word advisedly) action ( prorogation) or words ( traitors) is in faro terms va banque - that is, staking everything on a bet, holding nothing back. If successful, the damage would be awful, quite apart from Brexit, for the future of government in this country - but the hope must be that at va banque one can lose the whole game, so that the grab by Boris leads to his complete failure

Yeah, well, thanks for the felicitations, and going as usual for what is in this context another issue. You people! But I partly agree. For now, the No Deal disaster must be averted, but then Brexit needs to be sorted, and the only ways forwards are withdrawal of Article 50 and/or a second public vote. No new 'deal' is going to work - it's undoable.

Mea culpa......... so I now say, what a wonderful continuity to celebrate. And in that, and music, we can retreat into what has been called "internal exile", despite what is happening in the world outside

Thank you. I'm actually feeling rather buoyed up by the recent events in Parliament. As I wrote in the above message to Sue, the elevated mood created by the Haitink Bruckner Seven continued when I heard the good news last night. Proms pics now added to the mix.