A week of jaunts around live concerts and opera 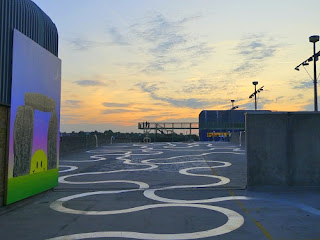 I never expected to notch up seven live events in a single week under present circumstances (just think - if I lived in Scotland, which in so many ways I'd like to do, the indoor total would still have been zero). The fate of live concerts and opera still hangs in the balance, but on the basis of making hay while the sun shines - as it still does in what now amounts to 11 days of Indian Summer, starting with our Norfolk Churches Walk of which I owe a big account to come - I'll have last week to live off in the memory for a long while to come. Plus a barrage of reviews to help remember chapter and verse: I've linked to them here as the days unfold. 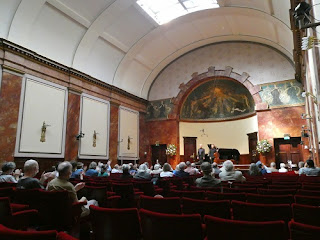 The Wigmore Hall finally opened its doors to a limited audience: all smoothly run, with handwash and temperature-taking from the friendly folk at the door, and then perfect placing of punters. There were two seats between me and Fiona Maddocks at Monday's lunchtime concert, but we still managed to have a good chat before Alban Gerhardt and Markus Becker took flight. 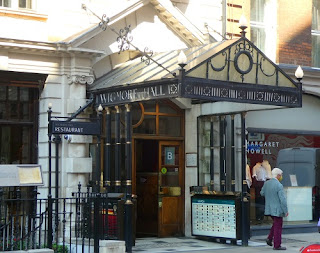 With very little pressure workwise on Monday, I left the Wiggers on a long central London meander to reclaim my bike, which I'd left at Victoria Station the previous week. Coffee and a bun from Ole and Steen first, then a falafel wrap sitting outside in a spookily quiet Old Compton Street opposite the Admiral Duncan (closed) and Algerian Coffee Store (open - my objective for passing that way, being able to buy my usual). 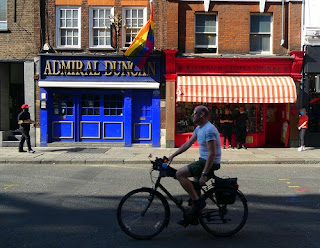 I'd hoped to pop in on Michelle and co at Maison Bertaux but it was firmly shut, if baking daily - the extra wing was boarded up. 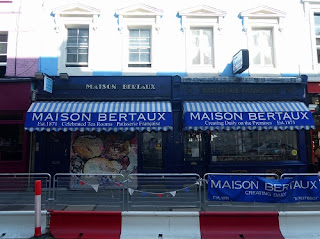 Trafalgar Square was as quiet as when I last saw it - on the last day of National Gallery opening before lockdown - but the NG had put tables, chairs and brollies out to make an attractive cafe. I was also unprepared for the latest artwork on the Fourth Plinth, Heather Phillipson's THE END (no explanation given where I looked, and perhaps none needed). 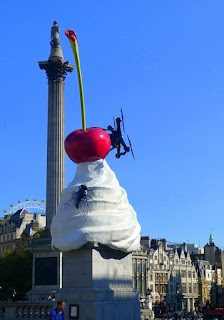 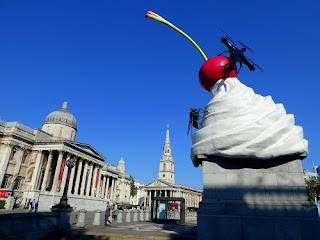 St James's Park was alive with a richer than usual variety of ducks and geese. I won't bore you with the ones I don't recognise - must send them to our ornithological expert Freddie Wilkinson - but no doubt they have something to do with migratory resting points at this time of year. At any rate it was pleasing to see white and black swans in close proximity 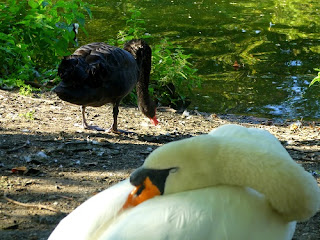 while the pelicans who normally hang out on a rock at the east end of the lack were to be found nearer to Buckingham Palace, on the shore. How prehistoric they look. 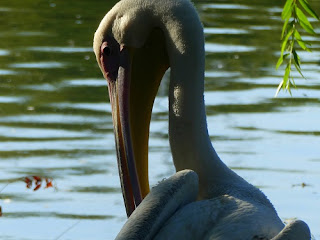 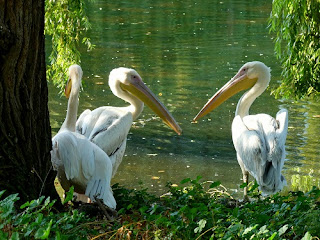 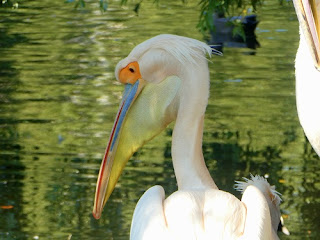 Tuesday evening saw a very regretful farewell to the magnificent Battersea Park Bandstand's Chamber Music Festival, so brilliantly co-ordinated by clarinettist Anthony Friend (who participated in the third of the concerts). The Mayor of Wandsworth and (I presume) her lady as well as less attentive councillors were present for the young and brilliant Hill Quartet's exquisite finale (this is some time before the start, as I enjoyed the salad prepared by friend Clare). 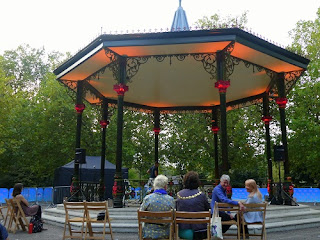 Nacreous sky at the start 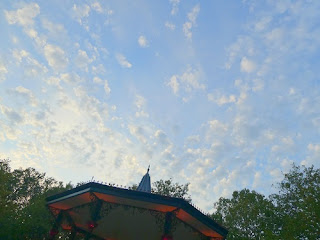 and specially added lighting for nightfall, which made the bandstand look a bit like a fairy palace. 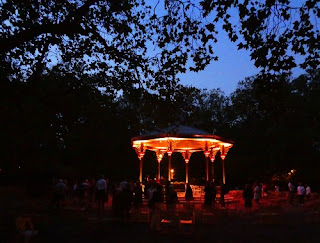 Cycling to and from Igor Levit's stupendous Beethoven sonatas recital the following evening has passed unrecorded, and Thursday evening was a night off. But Friday was eventful. We went for lunch to the Stockwell home of our friends Katharina and Jamie. Katharina produced a jar of honey from her hive at the end of the garden which has turned out to be one of the best and most complext I've ever tasted, 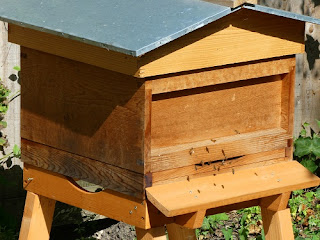 while lunch was enriched by tomatos from Jamie's project in the neighbouring square (I assume he doesn't mind my posting this pic, though I've refrained from the lunch a quatre because my own spouse requests that I avoid images on here wherever possible). 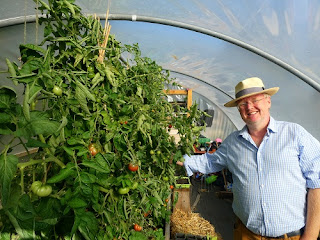 Heading to and from their road via a grand crescent, I admired fruiting on the way 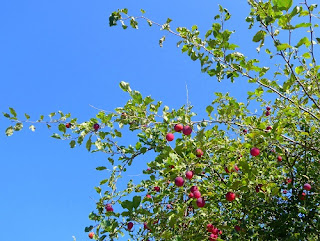 and a very large spider (though not larger than a couple I've seen in the yard recently) on the way back. 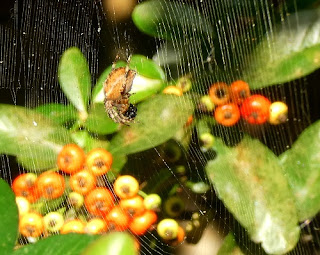 At 4 sharp I left to get to Marylebone for a train to High Wycombe and thence, through the services of a very friendly cab company, to Garsington for a Fidelio which advertised itself as a concert performance but in fact was far more vivid in every way than the Royal Opera one before lockdown. And there was the bonus of the garden at the side of the award-winning pavilion at sunset 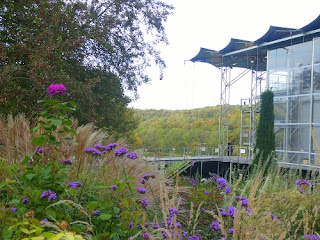 as well as the view across to the wooded opposite slope of this Chilterns nook. 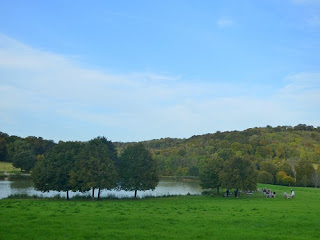 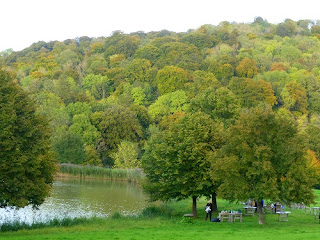 Saturday was far more exclusively urban, though St Mary Abbots, Kensington, where Sheku Kanneh-Mason tried out his first Dvořák Cello Concerto with his contemporaries in the Fantasia Orchestra, had glittering allure. And Kensington Gardens feels rural by the round pond, with more ducks 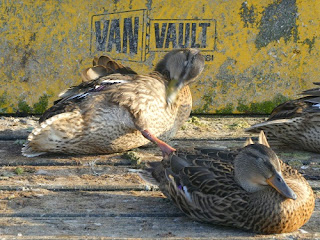 as well as starlings bathing 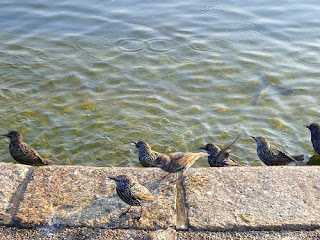 until you get to further lofty glories by the Albert Memorial, with its imperialistic take on other continents (but splendid sculpture). 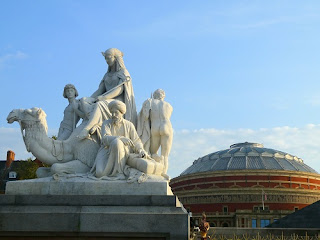 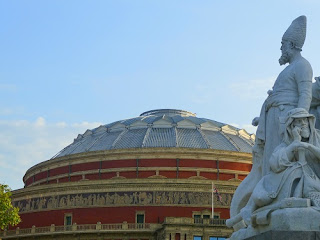 Thence I walked down Exhibition Road, livelier now the museums have re-opened, to hop on the District line to Victoria, and from there to Peckham Rye, where I walked up and down in search of decent coffee (not easy, even though it's become a hipster hangout which sits a bit uneasily alongside the long-term residents). I still love the stylish grunge of Bold Tendencies' set-up on the two top floors of the Peckham Multi-Storey Car Park. Goddaughter Rosie May joined me, posed by an artwork on the roof terrace (fabulous views over the city and further) 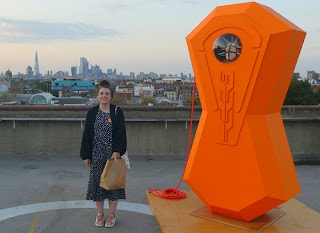 and she loved Samson Tsoy's recital, though had to go off and work so she didn't catch the equally wonderful playing of Samson's partner Pavel Kolesnikov both in a duo extra and with his (Pavel's) Trio Aventure. The shot at the very top is of the view west, with a Jeremy Deller on the left (we have a perspex Smiley of his at home), while an ironic comment on Victoriana frames the sunset view here. 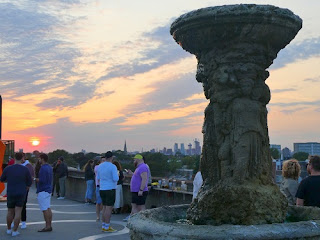 Not sure if this is the best place to post this for you to see, but if you want to catch a sampler of Stephane Deneve's work in St. Louis so far, the local NPR station has made available for a limited time his 2019-2020 season opener (at least most of it; the Guillaume Connesson after the interval looks to have been cut), the formal start of his SLSO tenure, along with a few other broadcasts:

Also happily heard your interval discussions on the 1992 Proms rebroadcast of The Queen of Spades.

Here in STL over the summer (and even before, in the case of the SLSO's associate principal horn), some folks with means have been staging outdoor chamber music concerts to give local classical musicians, freelancers especially, work and needed funds. With the turning of the season and the temperatures dropping, those summer concerts have wound down, for sure. The SLSO is about to try 2 weeks of indoor concerts at Powell Hall with Stephane D. on the podium, with extremely limited audience (100 in a hall that seats 2800).

Glad to know that you've been able to cover concerts in London, particularly at Wigmore Hall. I'm very far behind on those videos, not to mention Proms where there's just one week left to catch up. Hopefully you can hear more live events and that you're staying safe & healthy.

It's a very good place because there haven't been any other comments on this post...so thank you, Geo. Summer, Indian included, is truly over here now, just as the outdoor events were really getting going. But so much should have opened up in terms of such things for next spring and summer, whether or not the pandemic issue has been righted. I've just come back blitzed from Pavel Kolesnikov and Samson Tsoy's Ragged Music Festival, with an extraordinary line up in which their friend and mentor Elisabeth Leonskaja and the indefatigable Alina Ibragimova also dazzled. They even gave a free 'musical party' to round things off this evening at six - not sweetmeats, but four sonatas plus the Schubert Fantaisie.