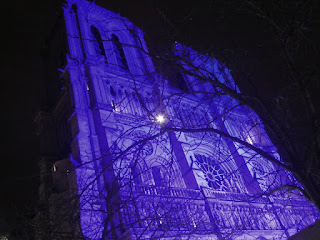 We were in the city of day- and night-light for two days longer than planned; seek not to know further, other than that we're back home now. Let's just say that it was total joy to walk for miles, discover more, eat well, and see two stunning exhibitions (Anselm Kiefer's Pour Paul Celan at the Grand Palais Ephémère, a new structure at the foot of the Champs de Mars, and a big Georg Baselitz retrospective at the Pompidou Centre, a serendipitous stumbling-upon - since I hadn't seen it advertised - to balance the other monumental, post-war German genius).

There were other surprises. I've always wanted to stay in a hotel on the Île Saint-Louis, and we did, very happily, at the lovely Hotel du Jeu de Paume, strolling out along the back and side of the building-site that is currently Notre-Dame, very well informed by the board-exhibition as to what's going on. We had taken a dear friend who's confined on a virtual WhatsApp walk around the Duomo in Florence, and decided to do the same here. So we all gasped when we rounded to the west front and found it lit up in blue 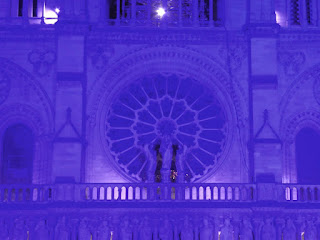 as are all the major landmarks of Paris right now to celebrate France's taking up the Presidency of the EU. I'd wanted to see the stars on the Eiffel Tower, but had to be content with blue in the distance with the dome of Les Invalides in front 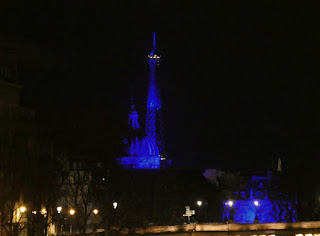 and the following night, after a day of brilliance and blue skies, a crescent moon hovered above the Panthéon 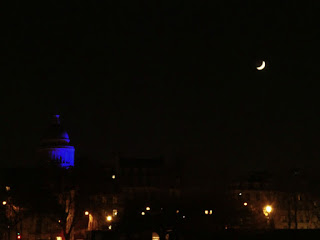 where we'd hoped to see the homage to its latest incumbent, Josephine Baker, but the building was closed for three days so we simply enjoyed another exhibition around the periphery, offering so many images like La Baker in her prime with pet leopard 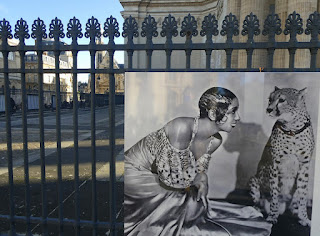 and her role as the only woman to speak at the March on Washington (she's with Lena Horne on the right). What a life she led, and what a great human being. 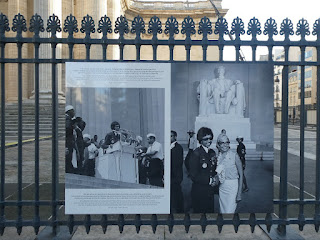 For this it wasn't a wasted visit. I also got to show J my favourite church in Paris, Saint-Étienne-du-Mont opposite the Panthéon, with its stunning choir screen. 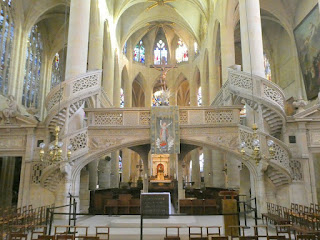 Hadn't previously appreciated its  abundance of 15th and 16th century stained glass, either. 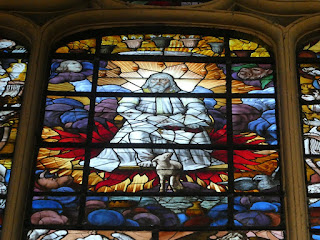 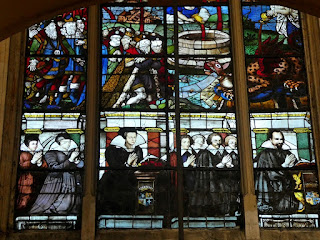 More serendipity came in the Montparnasse cemetrery where, having duly admired the outlandish monuments of Niki de Saint Phalle to two dear friends and the Baudelaire cenotaph, 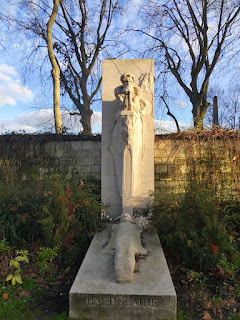 I was just remarking on how prosaic the place mostly seemed when we suddenly discovered, not knowing it was there, the grave of Jacques Demy and adored Agnès Varda - the headstone covered with lipstick kisses, 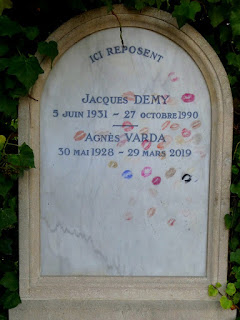 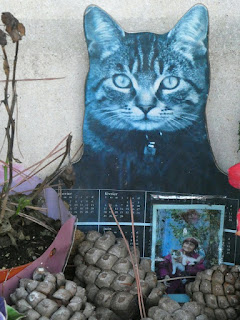 and several potatoes left among the offerings - mine was a 3D 'lucky' card of Buddha which I placed between the stones and the middle potato, all I could think of but it somehow felt right - 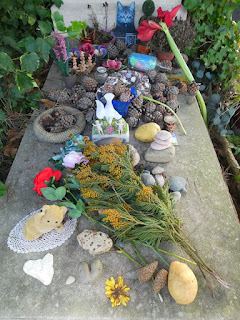 just as there are metro tickets on the joint grave of Jean-Paul Sartre and Simone de Beauvoir. 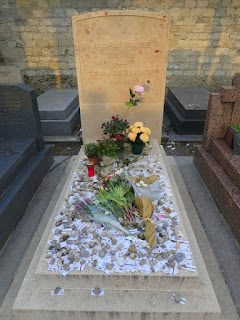 Had to look this one up, and found that Saint Agnès was known as 'Dame Patate' and dressed up as one for her 2003 Venice Biennale installation Patatutopia, which used 700 pounds of tubers. This is a still from a documentary fim of hers I must see, The Gleaners and I. No wonder she's the film director who inspires the most love and affection of all. 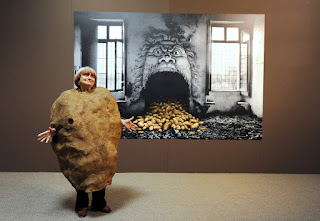 After our Montparnasse wander, we finally visited the Catacombs, which was not quite what I'd expected but not uninteresting. Kiefer and Baselitz must wait on another blog instalment, but I must mention two last wonders which framed our visit - on the metro from the Gare de Lyon, a fellow singing melancholy French songs perfectly in pitch and sweet tone, not for money, and to balance it on the metro to the Gare du Nord yesterday afternoon, a chap with a murine companion, daintily ribboned. 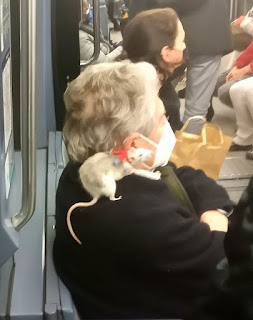 Paris can still surprise; this time it was not an anticlimax after Italy.

A great trop. L'ile de la cite is magic. Did you see the famous butchers on the main long street and hotel lambert home of ny friend le baron rede rip. Yes you see great things on the metro. Both look happy. I must bring my parrot et monkey on the metro when I get them!!!. Both gentleman et mouse animal look very content. Glad to hear you are home safe

There are so many exhibitions on in Paris at present!

Where did you dine? Brasseries. There so many. A great new on opposite Bolingbroke, grand brasserie.

I am sure I have shared my story of the night I helped Josephine on with her slippers after a performance. I only saw her that once and it was memorable on so many levels. I did have tickets for her grand retour at the Bobino but sadly that was not to be.

As I said in my email - thank you for taking me to Siena, Venice and now Paris. It is a great escape from snowbound PEI.

Will - no, never! Mon dieu! Can you reveal more; is there a post on it? I was full of admiration that she died in harness, as it were, or as near as makes no difference. The story of the multiple adoptions and Grace Kelly to the rescue is only one of many that made me vow to read a biography. Lovely that she is EVERYWHERE in Paris at the moment, with the admission so recent. Actually also wanted to go in to the great building becaause Kiefer has some installations there which I believe are permanent. Ah well, some other time.

Now tell me that you met La Varda and I'll faint. But JB will do.

Liam - first night at large, mixed blessings in L'Îlot Vache opposite our hotel - but hugely entertaining spectacle of controlling mistress with older man sending back two bottles of wine, J giving a running commentary on what she'd do next (spot on). Second night, wanted a break from rich French food so had a simple meal in an utterly delightful Vietnamese restaurant, the Foyer Mon Vietnam, with a host clearly much loved by the locals there. Third, most perfect food recommended by a patron of a wine bar in the market near Saint Sulpice, the Madamadou. SLightly post-brothelly interior but giant escargots and both main courses couldn't be faulted. Bolingbroke, where's that?

Merci David. I mean Bofinger. The keyboard on my phone had a life of its own@

Having read your travel posts and enjoyed your photographs (the Varda headstone here may be my favorite), what struck me so much is that, for a good while, I forgot that the ability to travel like this is actually not the norm right now, to say the least. And so, I marveled even more that you'd ventured out and took it all in stride and had such a brilliant time. This brings to mind Macron's comment, "'The unvaccinated, I really want to piss them off,' Mr. Macron said, using a French word that is more vulgar, explaining that a new, reinforced vaccine pass would make it impossible for the unvaccinated to go to restaurants and cafes, or the theater and cinemas." I am 100% with him. Let THEM be confined, so the rest of us can be let free to enjoy what the world has to offer, as you've done so marvelously in the European tour you've described in these posts.

I agree too Time to emmerder the selfish and stupid. Or, as one Guardian article had it, time to limit their freedom so we can enjoy ours. Mind you, much as I value the 'green pass' (our NHS one worked everywhere), it doesn't mean that the admitted don't HAVE the Covid. So masking indoors at all times except when sitting at tables in restaurants and cafes is also essential. We were even told by an Italian train guard that we didn't have the right kind of mask - there is one I've rarely seen here which we had to buy in packs.

Liam - the Saint-Sulpice restaurant was called Madamador, not -dou. I even liked the funky music.

It’s great that you were able to use your NHS pass—one less hurdle to surmount. And of course you are right that one must take precautions, even with a pass required for admission. Interesting that the train guard advised you needed a different mask than the one you had. I know of a case in Canada where this happened, too—only problem was the required mask was less protective! The person affected was an aerosol expert, so she took the issue straight to the government and press. But all that aside, it is just so wonderful that you had this brilliant respite, and we are lucky beneficiaries through your reports.

Undoubtedly the recommended one is quite advanced, and of course he didn't press the point, just said 'wear one in future'. Most Italians in the streets were wearing them. And thanks for your support of what felt like quite a big adventure under the circumstances.

How did you find about these restaurants in Paris. There are so many

Simply a question of narrowing down search criteria. And avoiding TripAdvisor, where posters seem to have appalling taste. As I wrote above, Madamador was recommended by a wine-bar patron in the market near Saint-Sulpice.

I use la fourchette.tripadvisor is filled with people like molly from colarado who complains thatthe food in Paris restaurants is too French. Yripadvisor does have good photos.. la fourchette let's you search by area so you can put in gare de lyon for example

For your next visit. Recommended by lea carnets de Julie. A French TV programme with episodes on utube. Very interesting food costs and recipes also has a website