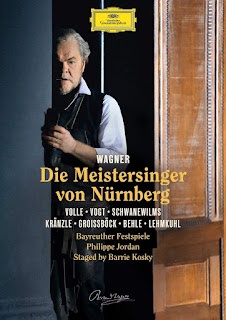 Wednesday afternoon sees the 10th and final class in my Zoom course on Wagner's Die Meistersinger von Nürnberg, and the end should crown the work, as well as our grand finale: our special guest is Ben Heppner, who for me sings the most beautiful Prize Song of any I've heard (on the Sawallisch EMI recording: glorious sound, though my overall favourite on CD is Kubelik's. The below film is clearly from a gala, but it will certainly do).

We've also spent a wonderful hour with Mark Wigglesworth, who conducted one of the Royal Opera revivals of Graham Vick's splendid production, and while Jane Eaglen (whom I saw as Eva at ENO, one of her first major roles for the company) had to pull out of a chat because of a crucial meeting about fundraising - she'll visit some other time - John Tomlinson will give of his time when he comes back from holiday, a very welcome postscript.

I previously covered Meistersinger when the course ran at the Frontline Club and Richard Jones's WNO production - still the best I've ever seen - was pending; he also came to talk to us. But every time it just gets richer. I don't look at previous course notes; it's important to start from scratch. This time we've been more preoccupied with the question of Wagner and antisemitism because, although I don't think it figures in this work (the comic villain Beckmesser is seen as a target, but that's been ignored by most UK directors, Jones included), Barrie Kosky, as the first Jewish director of the opera at Bayreuth, felt he had to tackle it. And I felt we had to follow some of the scenes in the DVD of his production (it's also on YouTube, by the way, but only with German subtitles). 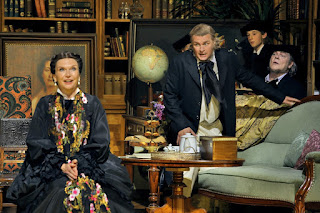 Felt the Wahnfried tableau restricted the scope of the Prelude, and it sets massive problems to solve: Sachs, Walther AND David among multiple Wagners; Cosima as Eva; Pogner as Liszt; Beckmesser as Hermann Levi. To his credit, Kosky makes the scenes between Beckmesser and Sachs laugh-out-loud funny. The ever- brilliant Johannes Martin Kränzle is at his most outrageous in this production. He's not at any point a Jewish stereotype, but Kosky makes the laughter freeze when the crowd turns him in to one. Personally, I'm happier with a view which treats Beckmesser as a Malvolio within a Shakespearean comedy. But I do understand why, in Bayreuth of all places, the peripheral questions need addressing.

The point where I lose faith is when Eva enters Sachs's study - here the room in which the Nuremberg Trials were held - in Act Three. We lost the sentiment in favour of swift humour in the comparable Act 2 scene, but although I adore Anne Schwanewilms, the silly mock-girlish skipping she's asked to do defuse all the emotion in the situation. And if Michael Volle's Sachs and Klaus Florian Vogt's Walther are both aspects of Wagner, where's the crucial love triangle? I turned back to Lehnhoff's stripped-back production for Zurich Opera, and having doubted the scene's power, the tears flowed again. It was with good reason that Strauss and Hofmannsthal saw in this a blueprint for the Marschallin-Octavian-Sophie triangle in Der Rosenkavalier. 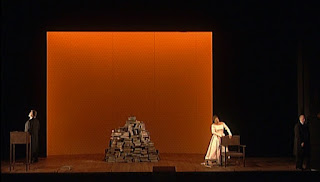 Excellent cast. Real-life couple Peter Seiffert and Petra-Maria Schnitzer keep it real, too. Some find José Van Dam's Sachs too dour, but I like the introspection, the pain is real, and he's very much an attractive older man. 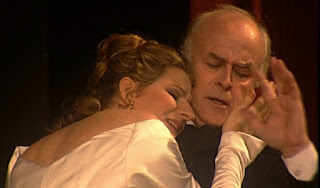 Every class has brought big emotions. As Mark pointed out, every transition is a thing of wonder, and strictly speaking you could say it's ALL transition. I'm especially happy with the two hours we spent on the Act Three Prelude and the Wahnmonolog, with the help of Brian Magee's eloquent words on the Schopenhauer connection in Wagner and Philosophy to help us out. There's also another of the few really good books on Wagner which I re-read with pleasure, because all the elementary points in it are put so well - this brief but pithy journey through the opera by Catholic priest, professor and author of numerous books on literature and music M. Owen Lee.

The art, ultimately is what matters, and among the many miracles of this great masterpiece is how it bears out all its claims with musical chapter and verse - everything is perfectly executed. Can it really be, as Mark wrote he was inclined to believe, in our initial email exchange, 'western civilization's greatest achievement'? While engaged on it, I'm inclined to believe so, Bach Passions and Mozart operas notwithstanding.

Verdi's Aida, of course, is a different case - the kind of plot all too familiar from early 19th century Italian opera, but ah, the music, the orchestration, the great string of duets! The writing is as masterly as that of its late successors Otello and Falstaff. I've had trouble persuading some students we should spend five Mondays on it, still more that G&S's The Yeomen of the Guard deserves two (I'm splitting the second half of term between that and Britten's The Rape of Lucretia.

We start tomorrow (Monday 3 October), probably hitting 'Celeste Aida' before we get to 'Morgenlich leuchtend' on Wednesday. Full details here - click to enlarge. 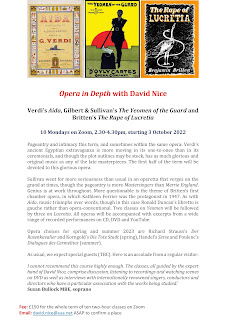 Thursday's non-operatic course this term is devoted to the symphonies of Elgar, Vaughan Williams (the bulk of the classes) and Walton. I thought after the Russians, Czechs, Hungarians and Finns it was time for British - I hesitate to say Engish - music to have a look in. I wanted some words of commendation different to Sue Bullock's for the opera course - and Mark wrote what I'm sure he thinks, so proud of that. Again, click to enlarge. 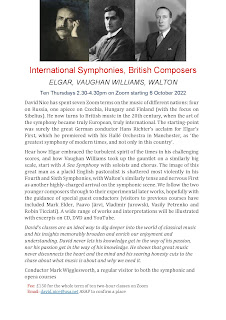 Onwards! I hope a few more will be tempted to join up; good numbers for the opera course, fewer for the symphonies, but that's always been the case.
Posted by David at 19:43