How to prove Bolero a masterpiece 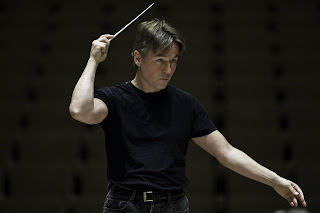 Put it in the second half of a Proms programme with the other, refined extreme of Ravel’s art, the complete Ma mere l’oye (Mother Goose) ballet. Don’t rush it; give your orchestral soloists time to unfold their wonderful solos (this Esa-Pekka Salonen - pictured above by Clive Barda - did with his Philharmonia players, hardly needing to conduct the first six rounds). Ravel’s genius will do the rest. And has there ever been any other piece quite like it, before or since? With a master colourist like Salonen, you can register how discreetly instruments are added to the rhythm as well as the tune, what an amazing effect is that first harp cluster-chord, what an impact the famous ‘only key change’ moment has when the trumpets have been kept in check and finally let rip. And if you’re in the Arena, as I was, you can start to move around as the screw turns as much as you like. You can even discreetly play at being Ida Rubinstein, in whose company work Bolero had its unlikely origin. 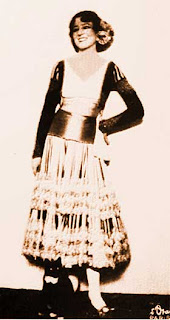 This Prom was no disappointment after Lucerne. Or rather Salonen, what is now very much 'his' Philharmonia - how they seem to like him - and the Labeque Sisters, looking not a day older than when I last saw them many years ago, did their best to make the arresting sounds of Andriessen’s The Hague Hacking triumph over the halting sense. It's a piece going nowhere. Both I and Howard, my jazz-musician friend last evening, were apparently both thinking ‘start! Do something!’. At one point there was a gripping duet between the first clarinet and his contrabass partner, then a rather tedious Messiaenic thrash. Then it was finally over, having seemed to take up far more than its 18-minute space.

Ravel shows everyone how it should be done. Is there a more magical chord in music than the infinite suspension of 19-part muted strings just before the end of Ma mere l'oye's Satie-esque ‘Beauty and the Beast’? The only comparable one I can think of is the moment when the Innkeeper’s Wife sings about the loneliness of the absent Priest in the last act of Janacek’s Cunning Little Vixen. But the complete Ma mere l’oye is so chock full of exquisite colours and – contemporary composers, please note – equally impressive in its substance. Esa-Pekka, conducting this score without a baton, could be a bit deliberate with tempi, but that paid off in the languid middle of ‘Laideronette’, with a flute solo excelled only by the much longer one in Daphnis. And I was delighted to see Liz Burley in an unexpected context, making her mark as ever in some vigorous celesta tinklings. As for Bolero, you wanted to applaud ever wind and brass solo as if you were at a jazz gig, especially the trombone and the cor anglais. Absolutely spellbinding.

Yesterday, when I should have been getting on with work, I spent too long catching up on iPlayer with Proms I’d missed while away in mittelEuropa. The G&S Patience was irresistible. It was a foregone conclusion that Sir Charles Mackerras would keep it light and springy, but the big surprise was the way the dialogue worked: instead of that arch, over-articulated D’Oyly Carte style, it came across as genuinely funny, infinitely resourceful.

How is it that Felicity Palmer can make every line tell? Admittedly her disdain for the military men's ‘Red and yellow! Primary colours! Oh, South Kensington!’ could hardly fail in the Albert Hall. She brought the house down with her instrumental recit – a parody of Beethoven Nine, Martin Handley’s informative commentary told us, I’d never thought of that – before exercising moving restraint in ‘Silver’d is the raven hair’. Wish I'd been there to see it as well as hear it (why on earth wasn't Martin Duncan's production televised?) Here are 'Lady' Felicity and the back of Sir Charles in the first of Chris Christodoulou's latest photos. 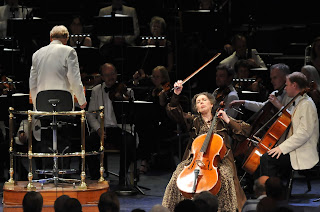 Simon Butteriss as Bunthorne is some sort of comic genius: sounding like John Reed but sharper-witted, occasionally raising shades of Alex Jennings in Too Clever by Half. There was also a husky Joan Greenwoodish cameo from Sophie-Louise Dann as Lady Saphir. Rebecca Bottone’s Jane Horrocksy northern accent seemed just fine for the milkmaid, and she settled into her solos. My apologies if every performance reminded me of some thesp or other, but that's a compliment.

I always forget where the gems lie in the operettas I don’t know off by heart. Here, belatedly, there’s that infectiously jolly Quintet ‘If Saphir I choose to marry’ with its quirky syncopated woodwind counterpoint, looking forward to what I like to call the 'jump for joy and gaily bound' ensembles of Princess Ida and Mikado and returning as an effervescent curtain when no-one becomes aesthete Bunthorne’s bride: ‘In that case unprecedented/Single I must live and die - /I shall have to be contented/With a tulip or lily’. What comic genius.

Bollywood Evening, or as much of it as I heard, didn’t do as much for me as I’d expected. It seems by all accounts that the dancing in the park was huge fun, but the rep delivered by big star Shaan and his band in the hall was real anywhere-pop, lacking the class of that great film composer Rahman’s movie hits. 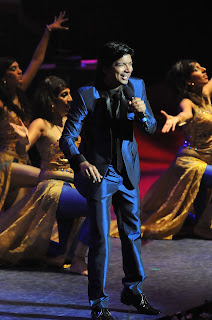 Poor Shaan was off form and felt compelled to say so: ‘I’m a better singer than I’m coming across tonight. I’m not well and the medication is making me drowsy’. Naïve honesty or too much information? Well, I applaud the idea of covering the spectrum of Indian music at the Proms; just let them make sure next time that the grand finale has a bit more real native flavour.

So, on with the next little oasis of Proms. Tonight's another busman's holiday - the wonderful Ivan Fischer and his Budapest Festival Orchestra, followed by the much-touted ukuleleists - and tomorrow I have to sing for my Shostakovich supper in the company of Andrew McGregor and Philip Ross Bullock. An edited version of that talk will be rushed out ready for the interval on Radio 3.
Posted by David at 16:01

Good to hear that you're imagining being at a jazz gig....

I'm getting there. But I did remember Queen's Hall jazz nights in Bolero, when I had to restrain myself from going 'yeah!' and cheering the trombonist and saxophonist...

And it was partly the influence of my jazz-playing friend, Howard Lane. Like me, he was waiting for the Andriessen to do something REALLY jazzy, and it just got stuck.

I had a couple of iplayer listens to Andriesson's Hague Hacking (title definitely lost in translation which put Claire off from the start) and I'm liking it a lot more. The sound is very different from the live RAH experience of course - a kind of smoother dolby-ish version maybe the BBC engineers prefer for a cleaner transmission, but I don't.

The Tom & Jerry references I picked up on (although much tamer than the wonderful cartoon soundtracks) and the piece hung together better than on first listening. But the performance still lacked flow and I wonder whether 2 or 3 more run-throughs would have sharpened it up.

I'm thinking of some more jazz you could explore as if you weren't busy enough and I'll get back to you on that. ECM have their Rarum series of compilations chosen by the artists, like Keith Jarrett for example.

The flow may have been Esa-Pekka's problem - he can be a bit 'sectional' sometimes though by no means always in Mahler.

I'm relieved that Carla et al didn't stay for the ukuleles on Tuesday. I cringed and I think they might have done too, though there's no accounting for taste.

Looks like you and Sebastian Scotney between you will point me in the right jazzy direction. Mind you, he recommended something months ago when he first popped up here, and I still haven't squeezed it in...

David look no further. Just enjoy Bill Evans playing My Foolish Heart. I think it speaks for itself.