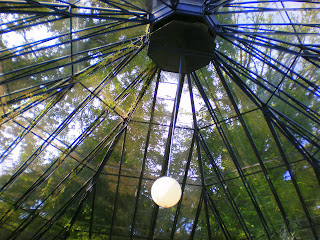 Was it the octagonal Palmenhaus (built 1851) of Zurich's Old Botanic Gardens where Mathilde Wesendonck sat and sympathised with the poor imprisoned hothouse plants in her poem 'Im Treibhaus' (I’ll come to its Wagnerian offshoot soon enough)? Or did she have enough of her own at home on the Rietberg? Zurich Opera's production of Wagner's Tristan und Isolde, lumping it in the bourgeois reality of Richard and Mathilde in the late 1850s, would suggest she did.

The exact location doesn’t signify. It simply gave us a pretext to go off searching the botanical gardens for atmosphere. The fact that we made a mistake by heading first to the new ones didn’t matter: the three very modern, interconnected domes there are quite unlike any others I’ve seen – mini versions of those in the Eden Project. 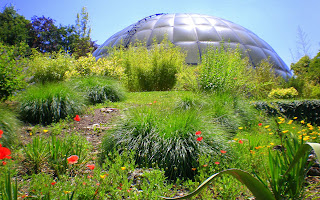 The grey glass gives a gloomy cast to the inhabitants’ plight even on a hot sunny day. 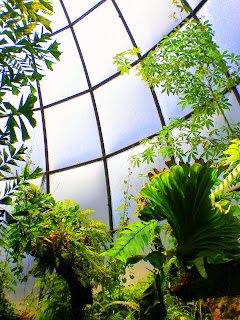 Well might Mathilde muse, in what is not exactly first class verse but certainly the best of the five poems set by Wagner:

High-vaulted crowns of leaves,
Canopies of emerald,
You children of distant zones,
Tell me, why do you lament?

Silently you bend your branches,
Draw signs in the air,
And the mute witness to your anguish -
A sweet fragrance - rises.

In one of the futuristic domes I found my old friend the antipodean tree fern, Dicksonia antarctica. 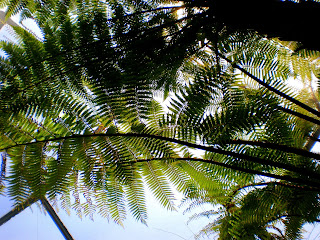 It had looked rather happier when we came across it in abundance throughout the glades of Ireland’s subtropical Derreen last year. I’m also delighted to see Dicksonia as part of the ever more abundant jungly scheme of the Glyndebourne gardens, too: 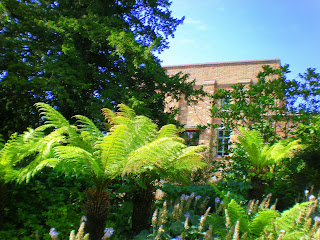 Which allows me to sidestep neatly to that Tristan stage and orchestra rehearsal I kept more or less mum about before the production opened. That's when I photographed the tree ferns. I still won’t judge the performers from the incredibly moving and involving run through, but what I saw and heard seems to have been fairly reflected in the more enthusiastic of the reviews. The next four photos are all by Alastair Muir for Glyndebourne. It was abundantly clear that great Vladimir Jurowski touched the Wagnerian ideal in the early stages of the Prelude, the momentum of the Act 1 finale, the susurrations of the summer night in Act 2 (a point where my soul really left the body for a moment), the love duet, the fever-flares of Tristan…of course VJ will go on learning and shaping more and more throughout his lifetime. But he must have felt like the young Strauss in Weimar who declared: ‘today I conducted Tristan for the first time, and it was the greatest day of my life’. For, as Jonathan Harvey said when I met him at that rehearsal, echoing Boulez, there is no more miraculous score in western music, surely?

We all marvelled at the adorable Anja Kampe’s deeply loving, wild Irish maid. 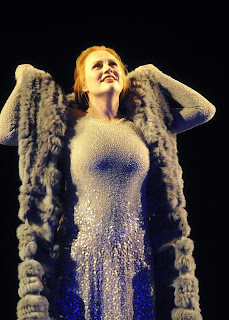 Kampe's gleaming middle range sounds like Crespin at times, and she hits all the high notes perfectly, even if there were occasional warning-signs of potential wear right up there (as how could there not be?) The Liebes-tod/-verklaerung was the most elevating I’ve ever heard it live, hand in hand with the unearthly blue light of the Lehnhoff production. I was taken aback when she came into the staff café in her dressing gown, and probably wouldn’t have recognised her were it not for the red wig: she has such stature on stage, and seems so much smaller, though still extremely pretty, in real life. ‘Aren’t you Isolde?’ I gauchely said. ‘No, I’m Anja’, she amiably exclaimed, extending a hand.

J and I have known Sarah Connolly since her days in the Glyndebourne Chorus, and I’ve never felt prouder for her, stunned by her projection of the meaning and unexpected reserves of tonal beauty as Brangaene, here cradling her beloved mistress: 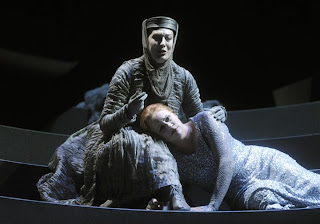 I was also taken aback by the sheer velvety depth and infinite anguish of Georg Zeppenfeld’s Marke. 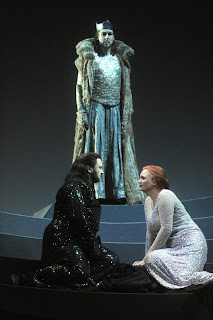 I wouldn’t judge Torsten Kerl’s Tristan from the rehearsal: he sang it all effortlessly, which already puts him among a handful of tenors worldwide, but would no doubt pull out more stops in the ‘real’ performances of the last act. Lehnhoff’s production, revived by Dan Dooner, has a touch of 1990s TV space dramas about it, but knows how to be still when it needs to be.

Which brings us back to the Villa Wesendonck on Zurich's Rietberg in the Enge district. 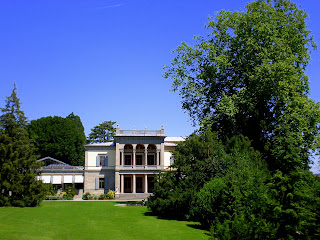 Alongside it Wagner, inspired by the probably unconsummated relationship with Otto W’s clever wife, penned a fair bit of music’s greatest feat, the Wesendonck songs – among which ‘Im Treibhaus’ became the music of Tristan Act 3, just as ‘Traume’ was transformed for the Liebesnacht – and some of Siegfried. His ‘asyl’ was soon pulled down when the Wesendoncks sold up, and the big and rather ugly Villa Schonberg opposite the Wesendoncks’ was built on the site: 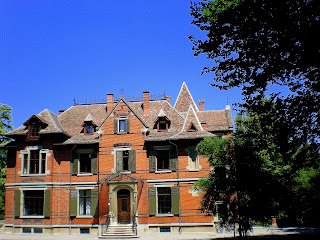 There’s still a bust of Wagner in the grounds: 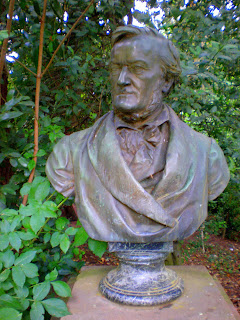 And a modern commemoration of his time there in the Rietpark. The Villa Wesendonck is now a superb museum of non-European art, recently graced with a stylish new extension reflecting the house: 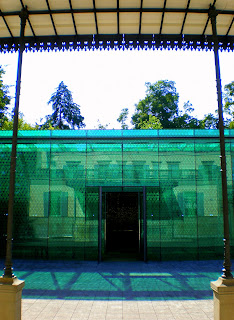 The beautiful grounds with their great old trees have long been a haunt of the lucky locals, who of course include our dear friend Lot and the goddaughters. The sisters are happy to give you a sample of the Villa’s more recent role: 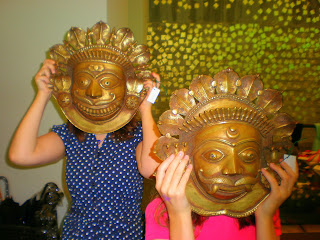 Every morning we were in Zurich, we bought our muesli, buns and coffee from the superb Rietberg Museum café and breakfasted under a tree. That’s the image I most treasure from a very full Zurich time – especially the Saturday morning before my Lucerne trip when we heard the alphornist whose practising I posted in a short film at the end of the 'Hyperaesthesia' entry. Here, for extra measure, is his bore. 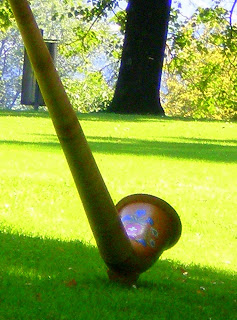 We now think he must have been preparing for the record-breaking rally of 366 players in Zermatt, superbly pictured in yesterday’s Guardian (though for some reason I can't find it online).

In addition that morning, we heard the strains of Brahms being practised on a nearby piano – the locale is full of musicians as well as orthodox Jewish families – and the Siegfried Idyll blazing forth from a hi-fi. Fear came into Paradise that morning, and unloaded: 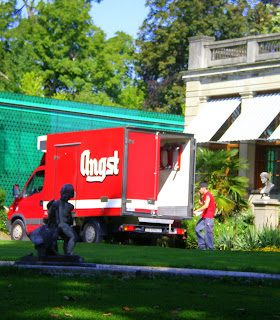 But there were also artists painting in the shade, babies executing their first crawls on the lawn, and a naughty little doggie ignoring the signs and taking a bathe in the fountain: It is indeed an enchanted zone, as the friendly guy working in the café asserted: he’d lived in Enge all his life, and he still found the park strangely magical. As do we, and would, I’m sure, even without that astonishing link to Richard and Mathilde.
Posted by David at 10:57

Thank you for dropping by my blog and writing. You have a very nice site and your take of Switzerland is charming.

I read about your breakfast and I will admit that I miss North American Breakfasts most of all here. Bacon and eggs and pancakes oozing with maple syrup. We dont get that here in Switzerland which will probably extend my life for 10 years.....but I still miss those breakfasts......

Please feel free to use what you like from my site.

Garry, I have to say I was a bit shocked when I arrived for a Shostakovich conference at Bard College, Upper New York state, and found two cinnamon buns for my breakfast - my teeth nearly fell out.

Of course we get Full English Breakfasts here and I often eat them when we're on walking holidays because it pre-empts a big lunch en route. But they're not good for the cholestorol, and mine is inheritedly high despite my generally healthy diet...

Well, your alphorn conference is irresistible and I'll reproduce that photo when I have another moment tomorrow.