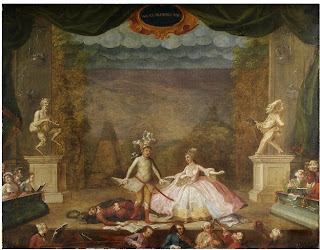 Here's a picture which is less remarkable for its execution than for capturing a slice of history not entirely unrelated to the worldwide Shakespeare carnival parading within the Globe. We arrived at the Victoria & Albert Museum the Sunday before last at 2pm, just too late to catch any of the art-college Shakespearean design ‘happenings’ which had by all accounts enlivened so many of the museum’s rooms and galleries. But I and Neapolitan visitor Clara were regaled with fabulously entertaining anecdotes about objects in the theatre collection by curator Geoff Marsh, who’d already given such good value at the time of the Diaghilev exhibition back in 2010.

He gave us the lively circumstantial history of this sub-Hogarthian artwork by William Dawes, The Downfall of Shakespeare Represented on a Modern Stage (click on the image for more detail). The darker-skinned spectators in the audience to the far right are two Cherokee Indians, part of a delegation visiting London in 1762. Chief Ostenaco, diplomatic in his relations with colonial big-wigs, met George III and sat for Sir Joshua Reynolds. 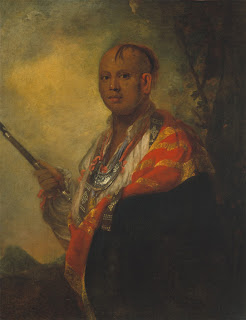 What they're watching is an allegorical murder: the triumph of Italian opera in the London of the mid 18th century  as represented, it’s thought, by Artaxerxes, over far superior native art (though if we're talking the Artaxerxes of Arne, he of Rule, Britannia! fame, both the libretto and the composer were English, so I'm a bit confused). Which is why Shakespeare lies dead while the operatic hero tramples pages of his plays. The V&A’s website page explains further: ‘In the 18th century Drury Lane and Covent Garden were the only theatres licensed to stage 'legitimate' drama. The popular Italian opera was the province of the King's Theatre in the Haymarket. Things changed in 1761 when the great English tenor, John Beard, took over the management of Covent Garden. He increased the number of opera performances and those of Shakespeare fell.’ More background here. 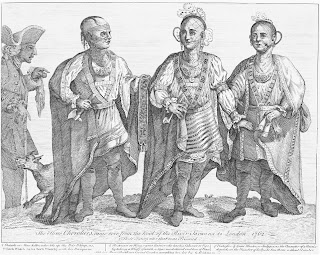 Needless to say, rumours of our Will’s sudden death were greatly exaggerated, and now visitors once perceived as exotic are more likely to be playing Shakespeare from their own special perspectives rather than missing the chance to see his works on the London stage. I’ve now seen two more offerings in the great Bardic world meeting of Globe to Globe to follow the first play to be performed, Troilus and Cressida in Maori, and I’d be hard pressed to say which of the three was the best. No need to reiterate eulogies on The Arts Desk – on the Swahili Merry Wives of Windsor here and the Hindi Twelfth Night here – but let’s see a couple more images. First, Mrisho Mpoto’s Falstaff nimbly tumbling, if such a thing’s possible, into the buck-basket supplied by Mistresses Page (Chichi Seii) and Ford (Lydiah Gitachu; photo for Shakespeare’s Globe by Marc Brennan). 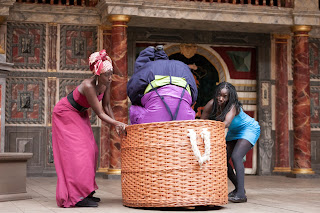 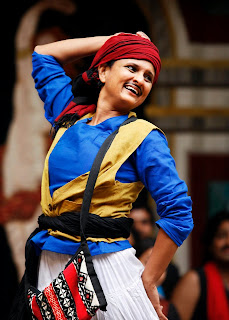 For proof that at least half the audience understood the Hindi, see below. I should hasten to add this was taken before the performance, not during it. And yes, I abandoned my usual groundling place and opted for a seat, since heavy downpours threatened; in the event there was only one. 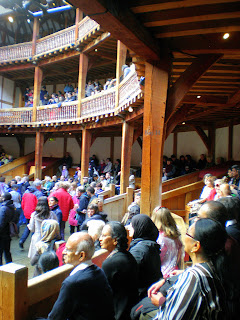 This week’s Globe to Globe  includes a handful of Italian actors taking on all parts in Julius Caesar; the appearance of the youngest nation, South Sudan, in Cymbeline; and Richard II from Ashtar Theatre, Ramallah, a staging which goes some way to meeting the objection of those (including Mark Rylance) who think Israel’s Habima National Theatre shouldn’t be allowed to appear with its Merchant of Venice.
Posted by David at 11:35

Your jumping-off point (not to mention the title) for this post is fascinating all on its own, and a perfect lead-in for your report direct from Globe-to-Globe.

I am loving your missives about these productions, not to mention the ArtsDesk pieces. Life-affirming, joyful, just tremendous. We were at friends for dinner Saturday, and I gathered everyone around a computer to show them the Maori T&C excerpt you found. Some of our number weren't quite too sure what to make of it, but our friend who works at Penguin was, as we were, totally enthralled. A magical enterprise--and I gather even so despite the weather.

Well, the haka opening is sui generis. But very much in the spirit of the play's opening speech ('the princes orgulous, their high blood chaf'd').

What an extraordinary story behind that painting. As you say, it's not quite up to Hogarth's standard, but certainly worth bringing to our attention.

Multiculturalism is under serious attack in parts of the U.S. currently along with attempting to live while being black or female. I can only wonder what the reaction might be if such a thing as your multi-national Shakespeare were tried here.

Indeed, John; I hope they're right about the unusual visitors to this imaginary, Shakespeare-slaying opera. It makes sense and the dates are right.

Will: is it that bad? What a shame, for I imagine New York as much as London would have various communities who would flock to hear Shakespeare in their mother tongue(s).

Ortega y Gasset ( I think it was) said that in the " melting pot of the nations", that is, America, the only thing that melted was the pot.