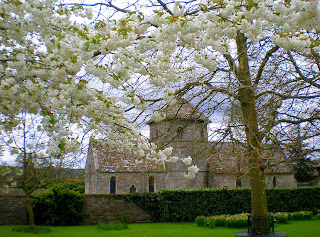 Our Gloucestershire Sunday walk took us down through the woods of the Newark Park estate and up along the back lane to this isolated but spruced-up* gathering of barns, grand house and Norman church in a circular churchyard which I like to think reflects an original pagan site (the rest of the way back to our hosts' farm at Uley was cut short because we'd come out with the wrong Ordnance Survey map, and sniffing our route on and off piste was only partially successful).

The name is singular: the option I prefer interprets 'Ozle' as 'Osle' or blackbird - think of Shakespeare's Bottom and his 'ousel-cock so black of hue, with orange-tawny bill'. The site is the side of one of those valleys in which Gloucestershire abounds, less dramatic than the hilltop setting for the house at Newark; the ensemble here does not open itself up to vistas. But St Nicholas of Myra is quietly remarkable. 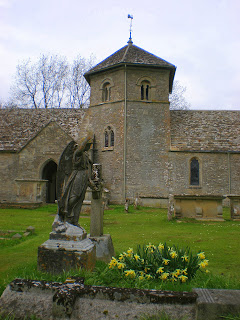 Its irregular hexagonal tower, dating from 1110-20, was probably built above the Norman nave of a small oratory. Enlargements were made in the early 13th and 14th centuries, and again in the 19th by clergyman architect William Henry Lowder. But the 'improvement' of the Victorian restoration is pleasantly offset by the building's current status under the Churches Conservation Trust, which always means clean-cut simplicity. 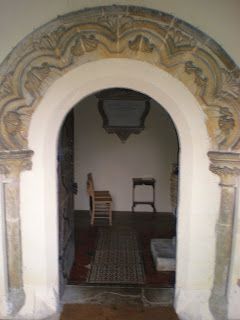 There are two fine arches, one chevroned in the west tower wall, the other more unusual around the south doorway (pictured above), which the detailed guide describes as boasting 'a finely carved exuberant decoration of stiff-leaf sprays set in six large lobes around the arch and supported by circular shafts with stiff-leaf decoration around the capital'. The font is 13th century, with dog-tooth and nail-head decoration 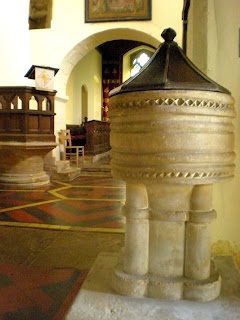 and, apart from the Flemish windows in the south-west tower, the only old glass is a medieval fragment of a saint at the top of the otherwise Victorian east window. 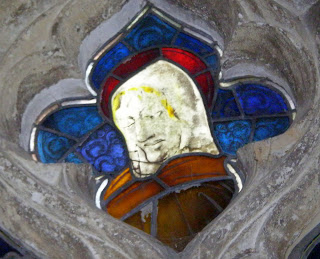 Prettily lichened cherubs grace a Warlock family tomb in the uncluttered churchyard (hard to fill given such a small parish). 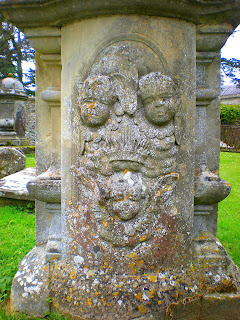 Later we processed to a homespun Evensong in the local church at Owlpen, gaudy with Victorian and Edwardian mosaics which you'll admire if you like that sort of thing or find contributing to a 'special ugliness' if you share the sentiments of the Shell Guide's author. Anyway, the 1913 angel is at least bright and topical. 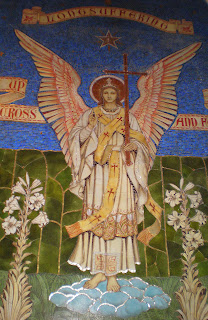 Our Easter fare was a last year's lamb from the neighbouring field, and the kitchen table was bright with eggs, including a few real ones from the bantams outside, and flowers from the garden, most intriguing of seasonal visitors, I reckon, being the snakeshead fritillary. 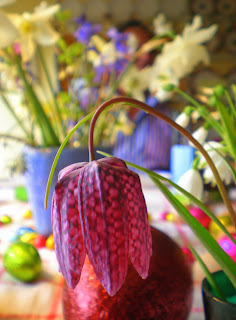 On a personal note, I count it as a big achievement to have ventured thus far, a small enough distance under usual circumstances but a major effort in the light of the past few months; the path to recovery surely (surely!) begins here. 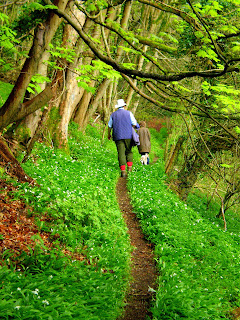 *friend Cal says it was much more atmospheric when overgrown, and before socially competitive folk laid renovating hands on the site. But it's all lovingly done, I guess.
Posted by David at 11:45

What a lovely walk this was. Those old Norman buildings—“quietly remarkable” is just the way to state it for this one. I love the sense one can get of walking back so far in time. The font (I had to look up what this meant to be sure what I was looking at!) is intriguing, and your photograph catches it in context beautifully. Ending with the fritillary makes one’s heart soar—though most of all one’s heart soars to know you are out walking. Yes, surely on your way to recovery—I will be continuing to clamor for that from here. Not least, by the way, because we will be coming to England this July. Mostly Shropshire and Norfolk, but in London, too, so with luck, perhaps there will be an opportunity to say hello in “real life,” if you’re there and willing and able to by then. (I’ll be in touch again on this once our plans are more firmed up.)

Sue, quick off the mark as ever, and that's marvellous news - we'll host a supper in your honour. While some 'cyberfriends' can be deceptive, I know from everything that you've written here, there and elsewhere, that you are the Real Thing.

Oh, my, what a lovely thought! I will be back in touch on this anon. Meantime, I enjoyed your footnote. I can certainly understand the appeal of the "overgrown," as well. So, for from one Real Thing to another, more soon . . .

So good to see you back, David, and enjoying the spring air (presumably on the only day when it didn't pour with rain!)

Indeed, John, Sunday saw just a few rays of sun and the bees were buzzing round the apple blossom. Monday was the kind of day which takes the shine off the countryside...

The baptismal font seemed very endearing to me for some reason; I really like it.

So do I, Will, and it seems to me to have the timelessness associated with Cycladic and (some) African art.

Please spare some energy for a little walk with me somewhere wonderful like this in May when I come to England? Sooo glad you are feeling better!
Lots love,
Sophiex