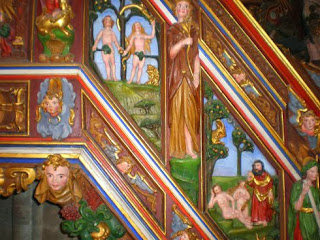 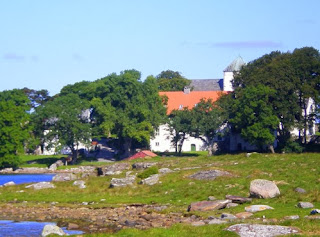 The one in St Swithun's Cathedral Stavanger was essentially as celebratory as its gaudy pulpit, completed in 1658 by Scot Andrew Lawrenceson (aka Anders Lauritzen after he settled in Bergen and married a Norwegian) Smith and running the Bible story from Adam and Eve to Christ in triumph: this was the first home for the great events of the fabulous Stavanger International Chamber Music Festival, my invitation to which kicked off an unforgettable Scandinavian holiday. 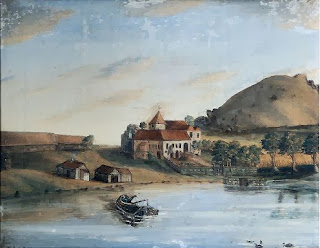 No doubt there would have been a party mood out on the island of Mosterøy when the festival celebrates the end of a busy week with a picnic and a concert at Utstein Abbey. Alas, we were only around for the first three days. Since an expedition to the famous Pulpit Rock up the fjord would have taken too long between the festival events, I pleaded with our obliging hostess to take a trip out to Utstein on a brilliant sunny summer morning. Bathing in the inlet was also an attraction (though only for me, as it turned out). 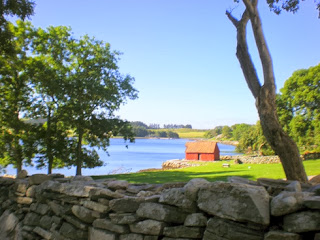 Of course there was no-one there except the girl in the ticket office, so we probably got a better sense of why the monastic community which existed there until the Reformation loved it so. Records for the Abbey actually go back to the 9th century when its site seems to have been some sort of royal farm or fortress for Harald Fairhair. The Augustinian monks settled there, and the Abbey was built, around 1260. Now it's almost concealed by the beeches and other trees which have grown up around it. 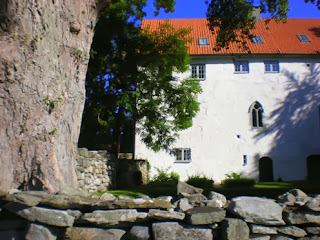 Post-Reformation it became the parish church, which accounts for the handsome early 17th century fittings by Gottfried Hentschel and the Lauritz Workshop (online information is very hard to come by; I should have bought the guide book at the time). In the Gothic east end, this includes the altar surmounted by trumpeting angels and the pulpit. 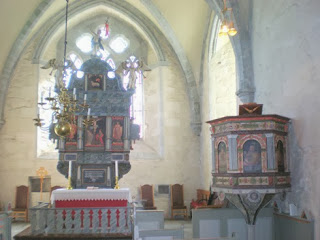 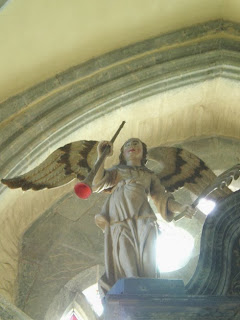 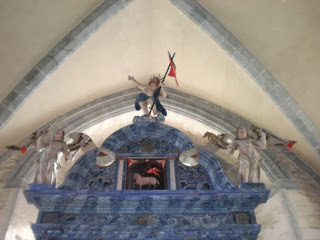 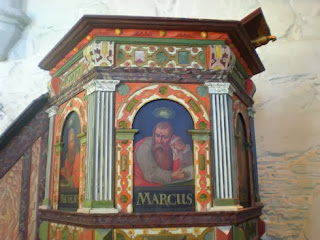 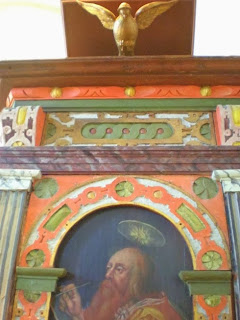 The font, modern as it looks, is Romanesque 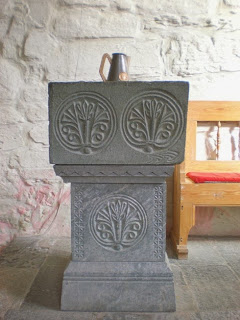 as is the nave, separated from the chancel by the bell tower. Here the Stavanger Chamber Festival concerts take place. 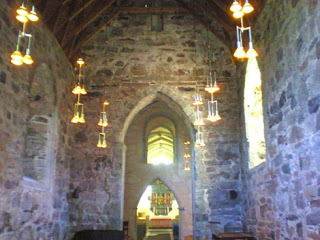 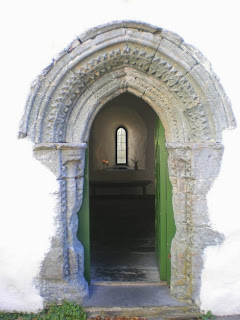 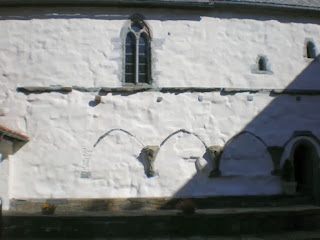 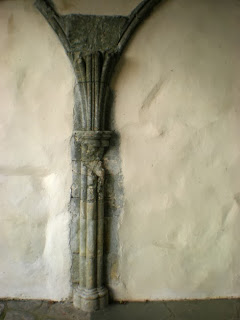 while the rooms occupied by Christopher Garmann in the 18th century are handsomely if simply furnished and on a sunny morning the windows frame trees and water in a halo of light. 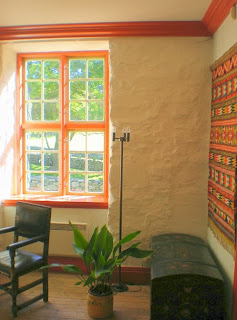 Everyone loves a bit of the supernatural to be appended to a sober monastery. The story goes that Garmann's first wife made him swear on her deathbed that he wouldn't marry again. 20 years later he did; his death followed in a matter of weeks. Copies of the first Garmann couple's portraits - pretty terrible, it has to be said - hang in their dining room. 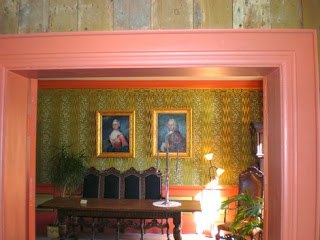 After that air was needed, so the others sat on the jetty while I swam around - the only holiday bathe in salt rather than fresh water, though it still felt like a lake. 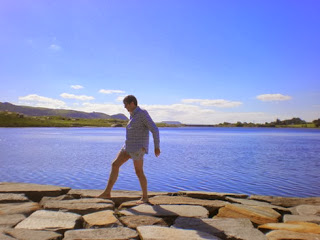 Back in Stavanger, the cathedral was always evocatively lit for the concerts, the purple of which I'm so fond bathing another Gothic chancel behind the players and Victor Sparre's rather attractive 1957 east window glowing until nightfall.  First of two images by the excellent official festival photographer Nikolaj Lund. 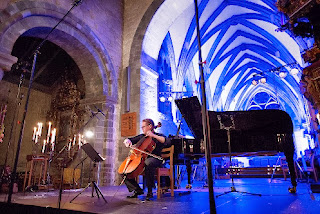 St Swithun's has an older history than the monastery. The bishopric was established around the time of Stavanger's founding in 1125, its first encumbent none other than Reinald of Winchester, who arrived one of Swithun's arms (!) and other relics - removed after the Reformation, when the building became Lutheran, to Denmark. Norman nave, second of Lund's photos during a festival event. 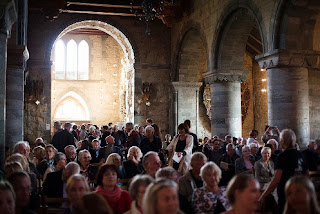 All the pulpits we saw in Norway and Sweden were handsome in either simple painted or extravagantly carved ways (or both), but Andrew Smith's was the garish jewel. 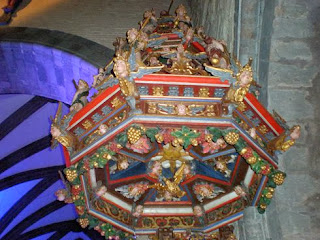 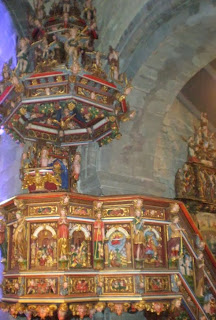 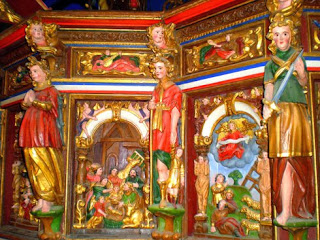 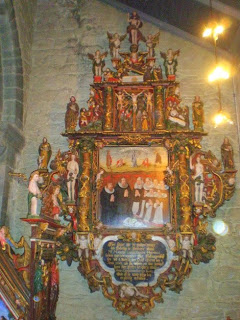 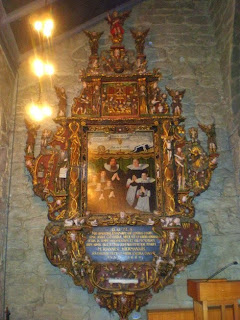 Externally, the cathedral was stripped back in the 1960s to something of its original look after a heavy handed Victorian restoration. Festival crowds outside the west end. 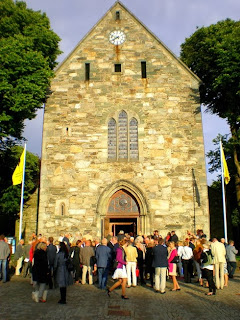 Some of the 19th century work, chiefly on the east end exterior, isn't bad at all. 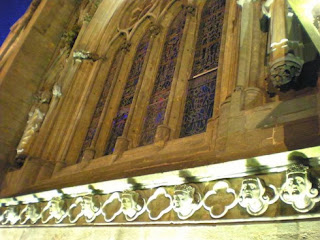 And the setting is lovely, sloping down to Stavanger's central park and lake. 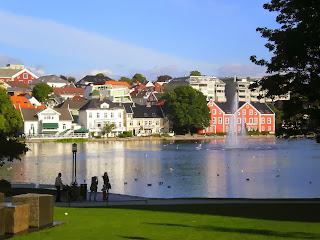 Fond memories from the perspective of rainy, strife torn November. Barbican protest report next. I wanted to finish by redeeming the half-promise of the title with Stravinsky's very pretty Four Norwegian Moods, salvaged from his unused film score to Columbia's 1941 The Commandos Strike at Dawn. The only full version available on YouTube, an excellent performance conducted by Chailly, isn't for some reason postable here, so just click on this link and enjoy.
Posted by David at 12:00

How glorious all this looks! We have been thinking (dreaming) of a trip to Scandinavia, perhaps this summer, in conjunction with England, and this looks like it must be on the itinerary (along with Ainola, though my sense of geography may fail me here about whether that is sensible). Speaking of Ainola, we heard Neeme Järvi conduct the Estonian Estonian National Symphony Orchestra/Estonian Philharmonic Chamber Choir yesterday, and the final piece was Sibelius's Fifth. The Edu-Mate noted today, and I whole-heartedly agree, how striking it was that Järvi wasn't some grand and distant figure at the podium, but drew us all in and brought the music close. The audience, we think, was full of Eastern Europeans who were oh, so happy to be there, and that made it all the more delightful. No wonder you think so highly of him--how could anyone not do so?

Well, Sue, distances are huge - we were going to take trains from Stavanger to Sophie's in Leksand via Stockholm, but it would have taken the whole day just to get to Oslo. So the only way was flight - it cost twice the return fare to London! If you had longer, though, wending your way across the mountains to Sweden and then taking a boat to Helsinki might be a wonderful way of doing it.

Neeme is a truly lovable man - my great surrogate father figure (so was Charles Mackerras; though I knew he could be irascible, he was never anything but a benign mentor to me). What NJ has on his website, coy as it may seem - 'I love all the time. From morning til evening, I love music' - is absolutely true. I remember Paavo, his eldest son, telling me how they faxed to and fro - you see how long ago that was - about recordings which had caught their fancy. Any dad who can propel his three children to carry on his love of music - and Michail Jurowski seems to have been the same - is rather extraordinary. And he's so totally relaxed, at ease, in his grand mastery. I envy you that concert since I've not seen him with the Estonian NSO in action.

And many thanks, David, for giving me something else to find out more about - Braco-born Andrew Smith. I'd never heard or read of him before reading this blog.

If you hadn't heard of him, Catriona, then very few Scots will have either.

Thought I'd just pop by and say hello, thinking of you with piles of Parsifals on either side of you! Finally had a chance to listen to Four Norwegian Moods today--YouTube has decided to mute itself irrevocably, it seems, but I pulled it up on Spotify, and am very glad to make its acquaintance, too. And now, I am listening to Tchaikovsky's sextet, Souvenir de Florence, from the Brilliant set. I am beginning to think I have a fondness for pieces with folk-ish references, as this one has, I take it. So, thank you for a night of very nice music!

Not sure exactly how far I've got with the Parsifals, Sue, since I'm doing acts at a time, so far chopping and changing between the first and the second since that's as far as we've got in class. Now Act 3 beckons and the script must be in by next Wednesday...then I emerge from my cavern where Fafner like I sit on all these treasures.

Glad you like the Norwegian Moods - jolly, no? And, yes, based on traditional material. Not sure there's any quotation in the Souvenir de Florence; the funny thing is that the third movement theme sounds like a Karelian/runic-based number straight out of Sibelius. A life-enhancing piece, though, no doubt about it.

On Souvenir, I see what I was reading was speculative--I also noticed, on Norwegian Moods, that Bad Boy Boulez disrupted the Paris premiere--or is that folk legend of another sort?!

No, it's true - Boulez was a Messiaenic student at the time. Stravinsky was utterly bewildered as to why his claque in the gallery hollered so much at so inoffensive and modest a piece.