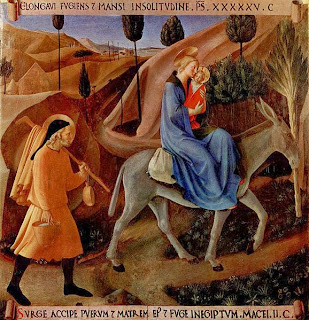 It's the best part of the Christmas story, or rather the one according to Berlioz, Mary, Joseph and the infant Jesus, having escaped the most obscene horror, arrive in Sais, Egypt, close to starvation. In the third part of L'enfance du Christ, they are rejected by Egyptians and Romans in the town with the same cry: 'away with you, filthy Jews!' An Ishmaelite father, however, welcomes them into a lively household.

The gist of what he sings is 'come in, poor homeless people, relax, eat, drink, listen to this sweet music'. And heaven on earth it is indeed, the trio for two flutes and harp. This is enough to reduce anyone to tears at such a point in Berlioz's gentle drama, if they haven't been weeping already (I was, nearly all the way through the BBC Symphony Orchestra performance the other week). The best I could find on YouTube has the harp replaced by a guitar, but the three players - from left to right, Armin Egger, Chia-Ling Renner-Liao and Wolfgang Renner - aren't bad at all, even if the 'transcription' is a little eccentric and spare at times. Enjoy, and happy holidays.

David, the icon you chose to head this post is lovely. And, further: more Berlioz beauty over your way, and more tears over here! I have enjoyed a year of reading and listening at your blog, and you have surely prompted the beginning of a beautiful friendship with Berlioz for me. I continue to visit here, not always commenting, but always learning something new, and with great pleasure. -- Elizabeth

It's been a pleasure reading and hearing from you this year, Elizabeth - you are truly a spirit kindred to Sue, and i hope you'll blog more in 2014.

The painting is actually a Fra Angelico, which may come as a surprise. I blush to admit I know little about the source of Berlioz's Ishmaelite story, but couldn't find it represented in art. Of the flight into Egypt and the rest in the oasis, my absolute favourite is the early Caravaggio i used to illustrate the TAD review, with a callipygous angel fiddling to soothe the weary family. Friend Liam also sent a card of a representation in the National Gallery of Dublin in which Joseph wears a very natty hat.

L'enfance continues to give. The shepherds' farewell ran through my head and kept me serene during flood-disrupted travel on the eve and my excerpts pleased our Lacock hosts.

Season's greetings to you, and may new leaves appear soon.

I was going to ask you the source of the Ishmaelites in this story. Sais too. But it seems you're as puzzled as me. Maybe someone will enlighten us, David.

I've been listening to Part 3 in various recording over the past 36 hours. And I have to admit my love goes out to Munch's rather unregarded one with the Boston Symphony. I've had it on a lone LP for some 40+ years.

It's odd, isn't it, Roger - Berlioz seems to have made the the strand up. Certainly it's not in the Gospels. But it's entered my own Xmas mythology, that's for sure - and the Pseudo-Matthew tale of the Palm Tree that bends to feed the hungry family is even more beguiling. Legends are there to be embroidered, to have different outcomes.

I don't know the Munch recording. I'm a fan of his various Symphonie Fantastiques. But the RCA Romeo et Juliette when I covered it in Building a Library was coarse and disappointing.

David: Sending you and yours our very best wishes for the New Year, with many thanks for welcoming all of us into your own lively household of sweet music all this year. I join with you in looking forward to more posts from Elizabeth, too, and to continued lively conversations in 2014.

And to you and yours, Sue, with special hopes for your composer proteges Dylan Mattingly and Lembit Beecher: they really deserve the highest success in 2014.

Lists still imminent, as required on TAD and rather more quirky ones to come here before the year is out. We've had a golden two days in Lacock, with warm sun yesterday for a dubious hunt meet as well as basking on a bench underneath the Abbey's big oriel window. Before that, heavenly walks on Xmas Day around and above the River Avon's flood plain. There aren't many houses built on it down there so the damage was minimal. Were you at home on the Hudson? Bracing, I bet - snow?

Bracing is putting it mildly, and ill-timed snow for travelers resulted in some cliffhanger moments, but all is well, and we've been warm by the fire and certainly well-fed. Today is milder, so a bit of a respite. Meant to add, when I wrote before, that your JibJab was hilarious. That rockin' out rendition of whatever it was would have fit right in with our Christmas Day playlist. In fact would have improved it, if you can imagine that . . .

I should hasten to add, Sue, that the diplo-mate is to be heard in finer voice as Florestan. The penguin rocker impersonation was expressly for that lively animation only...

The most unusual response to it we've had is from a translator friend who claims his mother received a gold disc for HER rendition of 'Winter Wonderland', which presumably would have been a little more mainstream. I must ask him more about it.