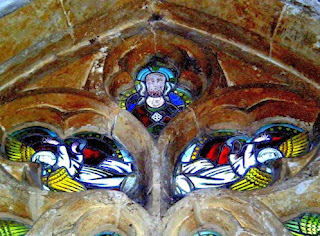 £1600: that's the amout we brought in between the four of us for the Norfolk Churches Trust after our September circular walk from Beechamwell, with the last major church on the route the rich and well-tended St George's Gooderstone (upper medieval panels of its south transept window pictured above). Warmest thanks to all who contributed: your cheques will at last have been cashed, I hope, by trusty Mary Heather of Burnham Thorpe, Nelson's church, to which the lion's share (I forgot what percentage) will go.Below: window from East Runcton, a conservation special, seen on an earlier walk. 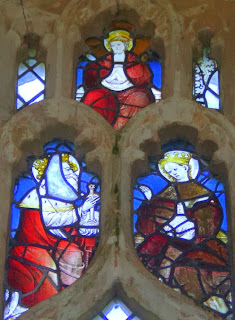 We handed the money over to our leader and organiser Jill at the National Churches Trust's 60th birthday celebrations in Westminster Cathedral two Thursdays ago. The music was splendid, though sung by the -very fine - Westminster Abbey Special Services Choir rather than the usual one with the boys (in school, I guess). Readings were given by dubious TV celebrities Bettany Hughes and Bear Grylls, whom I've never set eyes on before; he seemed rather pleased with himself and chattered to his partner through the first half of Purcell's I Was Glad. That lovely actress Geraldine James, though, I adore, and she delivered a rather fine poem by Rowan Williams (picture below from the National Churches Trust's picture stream). 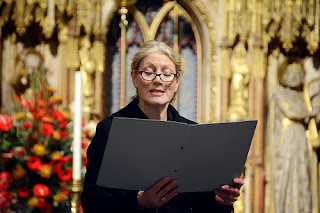 I was less impressed by Williams' successor as Archbishop of Canterbury, Justin Welby, who doesn't have the most beguiling of voices and made the grandiose and wishful assertion that even the deconsecrated churches would eventually be filled by the 'growing numbers' of Christians ('not "if" but "when" '). One look around the packed abbey told one that this was an ageing community, though I suppose you could argue that new generations will grow into the religion. I doubt it. Certainly not for me any Christmas sermon by this man. On the other hand, in the present Archbishop of South Africa Thabo Cecil Makgoba, we have a highly articulate successor to the great Desmond Tutu. Please stay with him once you've clicked on this YouTube link (no embedding as yet available) - not that you wouldn't be compelled after the first few seconds - as he puts it so well about respecting the gift of difference. 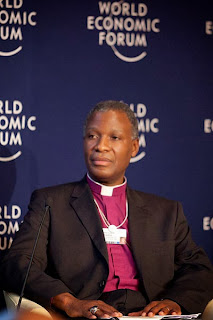 We need leading Africans of dignity and eloquence even more now that Uganda has today passed its obscene law enacting life-long imprisonment for its gay citizens.

Anyway our cash would barely make a dent in the sums needed to repair the recent flood damage, which I'm guessing has spared most of the churches - the ones along the coast tend to be sensibly built on eminences. I'm almost tempted to re-read two fine novels featuring more terrible floods in the past, Jeremy Page's Salt and Dorothy L Sayers' The Nine Tailors (which of course also has a composite Norfolk fenland church at its centre). Jill sent this photo from the Eastern Daily Press (credit: Matthew Usher) of Kings Lynn's Customs House looking like a Venetian palazzo. 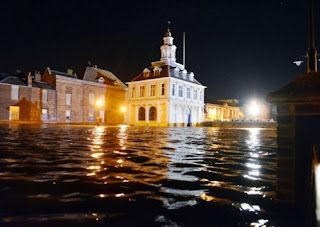 I last saw it in late summer light looking like this. 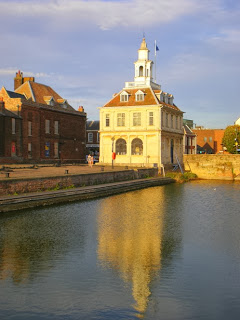 Too many churches sighted since our September walk: Layer Marney, East Mersey, Great Wigborough and Aldbury all need chronicling. But before I lose sight of it altogether, here's a church with a real gem of a south chapel, that of St Mary Bromham, Wiltshire. We visited it more or less spontaneously on the way to a sweeping downs walk on the last day of our late summer stay in Lacock (where we're heading again soon). 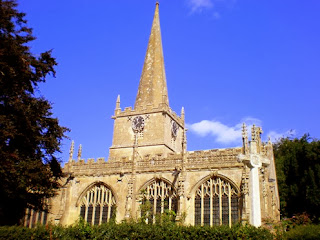 The Tocotes amd Beauchamp Chapel, licenced in 1492 and later called the Baynton Chapel after later incumbents, is richly decorated both within and without. Pevsner on the exterior: 'it is three bays long and extremely ornate. Buttresses decorated with thin buttress shafts and pinnacles. Five light window with angel busts at the apex.' Indeed, angels are everywhere, without 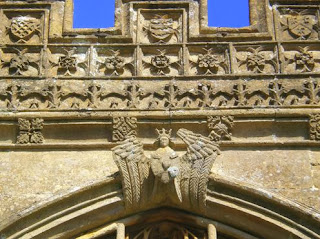 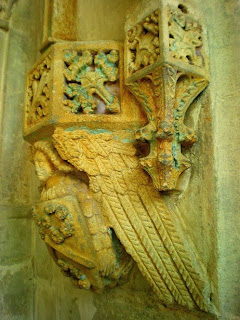 'Battlements with quatrefoils, pinnacles with their own decoration'. 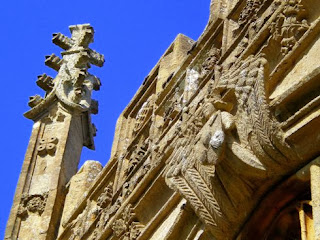 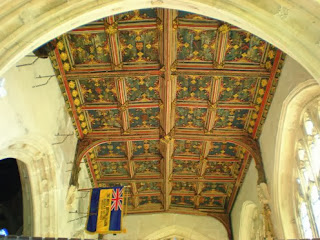 and several handsome tombs. There's one of Purbeck marble to Elizabeth Beauchamp, circa 1492. Pevsner again: 'tomb-chest with cusped quatrefoils containing shields. Canopy arcading merging into the heavy top. Against the back wall kneeling image of brass.' 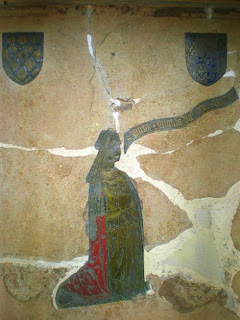 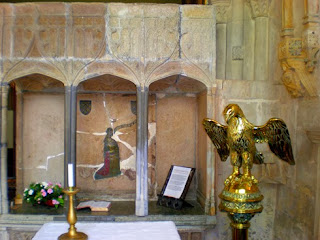 Sir Edward Baynton's tomb-chest dates from a century later, with an abundance of family brasses. 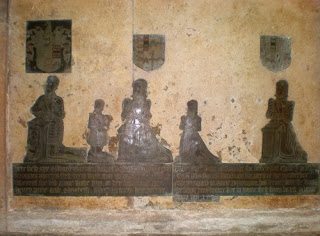 There's also an alabaster effigy of Sir Richard Tocotes, d.1457, in the south transept, much graffitied - the inscriptions in themselves of interest - but very fine for all that 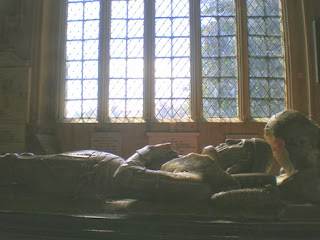 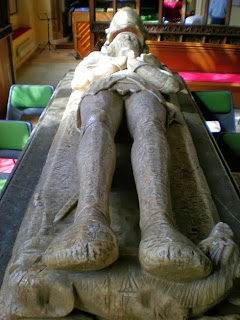 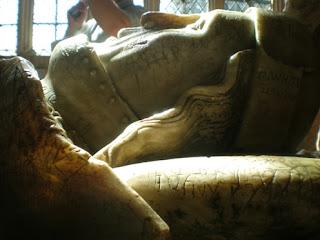 and plenty of original stained-glass canopies, with fragmentary glass around them. 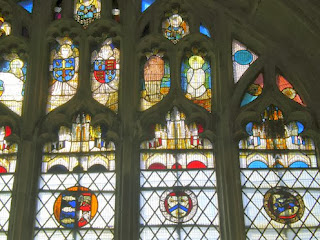 We did the usual post-interior thing of walking round the outside, for the whole of the chapel needed seeing 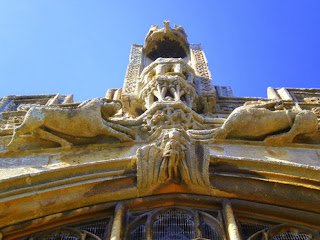 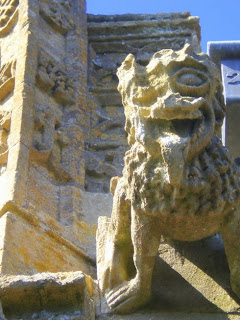 but had quite a surprise on the north side: the giant celtic cross looked familiar. 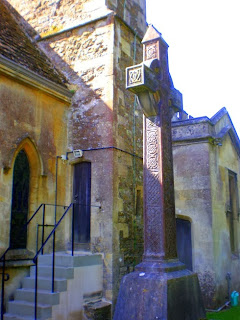 It was, of course, the famous monument to Thomas Moore, whose Irish melodies - mostly in Britten's arrangements - J had sung at nearby Bowood the previous June. The inscription, which it was hard to see in the shadows, quotes ' O harp of my country'. 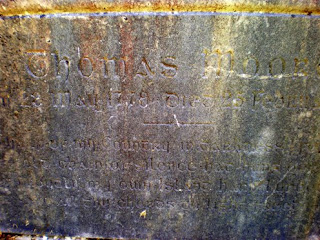 Shame we didn't realise Moore's home, Sloperton Cottage, was so close. J needs to learn more rep, and only the other day I was listening to Berlioz's Moore settings. They're not all inspired, but 'Adieu, Bessy' is a winner. Happy memories, anyway - a last shot, of singing around the piano beneath Tom's portrait at Derreen House, Country Kerry one idyllic summer. 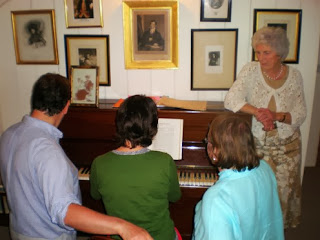 Our dear friend Julie's mum Nora Morrice (right) is no longer with us, so we remember her with the greatest fondness. 'Lovely lady, lovely lady', our English master at my grammar school, the great 'Tibby' Bircher, used to sigh when we read scenes between Desdemona and Othello. Nora was truly that.
Posted by David at 12:03

Congratulations David and team - great work. Loved the book recommendations - will be treating myself to the Dorothy L Sayers over xmas. And the photos from your Lacock jaunt are enchanting. The church looks fascinating - you must have been in Heaven (so to speak). Have a lovely Christmas,
Kerry x

Thanks, dear Kerry - what a fine choice for Christmas reading. La Sayers doesn't always get the credit she deserves as a truly great writer (and let's not forget she translated Dante).

I have an Icelandic thriller by the superb Yrsa Sigurdardottir lined up, alongside Simon Winder's Danubia and reams of Hoffmann. This time next year, will we be reading YOUR novel?

Good to see you all at the Berlioz, Jamie - hope it's still exerting its gentle influence on you as it is on me. Here's to meeting in more out of the way places in 2013.

David: So pleased to see another Norfolk post while our friends and family from England were here so we could show around the photographs. The chapel ceiling was particularly admired.

And I do recommend you look at the SA Archibish's speech - remarkable presence and apparent humility.

Looks like I need yet another lesson in British geography! Of course I did see the segway to Wiltshire, but in the rush of things here, failed to register it. (Wiltshire is, as it happens, where J grew up, so I really have no excuse.) I have this morning been able to listen to the Archbishop's comments, too. Absolutely wonderful, perfectly stated, and so essential for Africa and all to hear. Thank you for alerting us to this. (Glad also that your "package" arrived safe and sound. That Simon quote is a gem, isn't it?)

Many thanks David - fascinating and beautifully illustrated as ever. I'm surprised to see the word "dubious" applied to the splendid Bettany Hughes. As you haven't a TV maybe you aren't familiar with her work, but she does wonderful programmes. My old school friend Beryl knew Justin Welby when he was there in the 1970s; she used to direct plays at St Michael's Church and he played one of the Apostles in one of them. He and his wife were very involved and well thought of. Pity Bear Grylls was so ill-mannered; I heard him speak about his ascent of Everest when he planted a SSAFA flag on the peak!

I loved your crit of "Parsifal" and have just sent it to Kasper Holten. I'd had an appeal from him for donations towards mounting two Wagner operas next year (not new productions, thank heaven) - £2000 would buy a new costume for Daland and £1500 would go towards a new dinner-suit for Tristan. Is it diamond-studded, one wonders? Anyway I have told Mr Holten what I think of their rotten Wagner productions and had a courteous and thoughtful reply which seems to miss the point......so I have made a donation (towards piano-tuning!) and continued my theme.

We do have a TV, Juliet, but the aerial connection doesn't work so we are limited to watching iPlayer specials on J's iPad (maybe the only folk in London to have actually downsized our screen). I hasten to add I still pay the licence...

I only judge BH on having seen her on telly when I didn't know who she was and finding her manner extremely irritant in the worst presenter style. But at least she knows her stuff and maybe I should stick with her for longer.

For once I find myself in the conservative camp with regard to that Parsifal (though I loathed the K Warner Ring for its messiness, too). Anyway, the semi-staged Proms have clarified thoughts on what I want from staged Wagner - ie all the emphasis on the personenregie, the rest as uncluttered as possible and much to be done with lights. The Wieland Wagner approach, in short (what a pity few films exist of his work).

And I was a passionate defendant of Kasper's Eugene Onegin earlier this year, which so many people hated. I'm glad he is as courteous and responsive when people dislike things as when they leap to his defence...

Sue, I look forward to spending quality time with the Mattingly Bacchae disquisition. Can't wait for the sound, too. Isn't that a perfect Xmas speech from the SA Archbish?

One would be lucky to get a well made dinner suit for £1500 - probably double that at least. Off the peg might fit, physically though not elegantly, if one has a nice slim figure.