Addio to the master 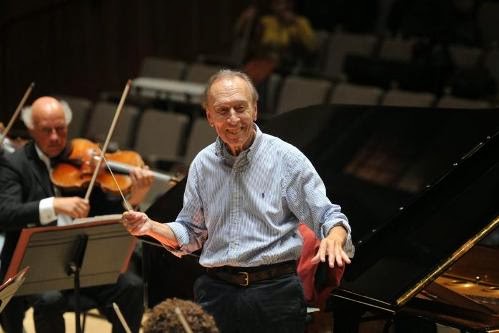 I can add little more to the Guardian obit now up, various blog posts and Arts Desk features - a joint tribute with Ed Seckerson being the latest - jammed with superlatives about Claudio Abbado, who has died surrounded by his family in Bologna at the age of 80. His Indian summer with the Lucerne Festival Orchestra yielded simply the best Mahler I've ever heard: I got myself out there on the strength of the Second Symphony on DVD, to be stunned first by the Seventh, later by the First; as for the Ninth, it was simply an out of body experience.

Likewise, surprisingly, Tchaikovsky's The Tempest in Rome with another super-orchestra made up of the Orchestra Mozart based in his home town of Bologna and the Accademia di Santa Cecilia. Abbado's Tchaikovsky Sixth with the Simon Bolivar then-still-Youth Orchestra in Lucerne was only part of a poleaxing programme. Bruckner Five at the Festival Hall didn't quite do it for me - blame my problems with the piece - but the preceding Schumann Piano Concerto with Mitsuko Uchida was one of THE great partnerships. Both concert photos here by the great Chris Christodoulou. 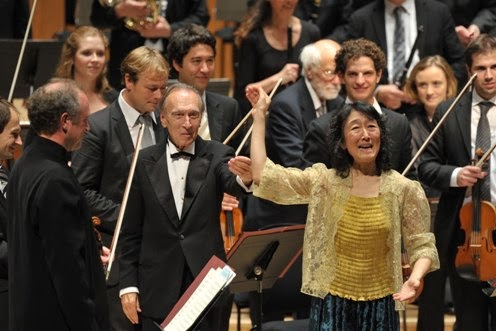 All the qualities which made these performances peerless I've ennumerated elsewhere, not least in the obit -  strange to think it was begun before the Lucerne dream took wing - but I'll just recall a few more. Live, way back, Debussy and Tchaikovsky with the LSO, more recently, Brahms with the Berlin Phil. On CD, the early Prokofiev Romeo and Juliet and Chout excerpts, Verdi's Simon Boccanegra with a dream cast, a Wagner disc with Bryn Terfel. 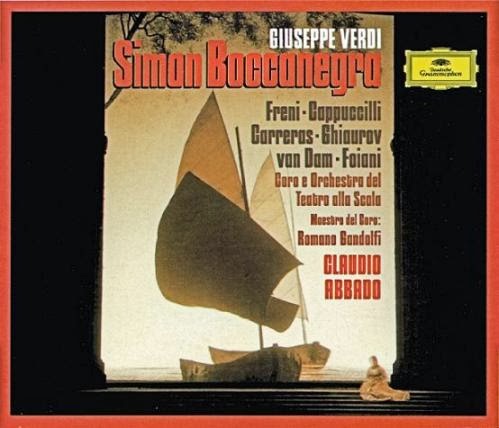 Later: in the City Lit class, too swamped by Abbadiana to do justice to Tippett's King Priam, I put together a sequence, mostly operatic to suit the students:

Berg: Lulu Suite (first three movements) Anna Prohaska, Simón Bolívar Symphony Orchestra (Accentus Music DVD of  2010 Lucerne concert with encore: 'Ach, ich fühls' from Mozart's Die Zauberflöte). To my amazement, I see the entire performance is there on YouTube. It starts with the most blistering opener ever, 'The Adoration of Veles and Ala' launching Prokofiev's Scythian Suite, and ends with a great Tchaikovsky Pathétique. I remarked at the time that Abbado brought his own sound with him, especially in the beauty of the Berg, and that was especially evident when Dudamel took over the following night, good as he was.


Then there should have been something from the Rossini Il Viaggio a Reims, but time was short. 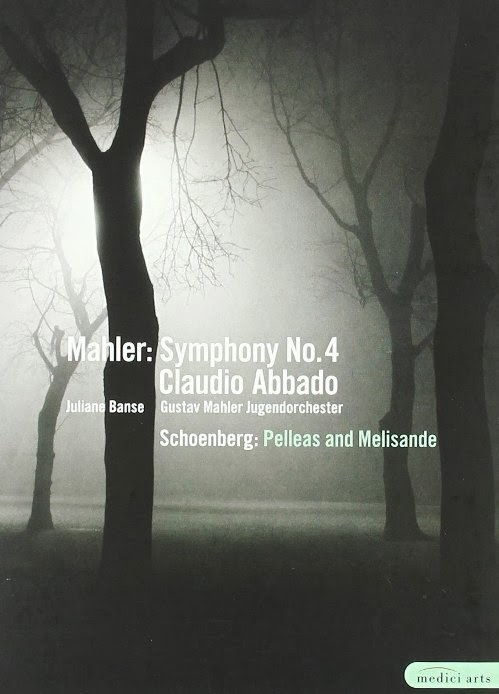 And what could have been more appropriately bittersweet than that?

Anyway, I wish Abbado had recorded more Wagner - it's criminal that we don't have his Parsifal preserved for posterity - and my one great regret is that he never tackled the two Elgar symphonies, for which his own supreme gift of the most flexible rubato in the business would seem to have been made. Back now, anyway, to listen to the Mendelssohn A Midsummer Night's Dream music which he performed with the Berlin Philharmonic last year (friend Debbie was first soprano in 'Ye spotted snakes'). I was so looking forward to hearing the same with the Orchestra Mozart in Dresden's Frauenkirche this June; sadly it's not to be, but we've had our visions. Though we'll hugely miss him, there's nothing to regret: no-one lived a fuller life, one so much longer than illness would have led anyone to expect.
Posted by David at 13:46

Dear David - that last sentence says it all. Many thanks.

I'm grateful to you for introducing me to Abbado, through the DVD of the Lucerne Orchestra performance of Mahler's Ninth, The performance exemplifies magnificently something Abbado himself once said, “For me, listening is the most important thing: to listen to each other, to listen to what people say, to listen to music. And to listen to silence.”

I have, and like, that Terfel Wagner disc, notably its
concluding "Wotan's Farewell." I feel that both there and in his Proms performance with the then-future Sir Antonio, he brought an expressivity to his farewell's last kiss comparable to that of the great Herr Hotter in the 1953 Krauss/Bayreuth! Another Abbado recording I have and like, though I have not taken it out in a long time, is his mix-and-match Mozart Requiem, also with a younger Mr. Terfel. He seemed to take the best from the various editions he mined for this Solti (or was it Karjan?) memorial performance. I was lent an earlier Mahler 2 some years ago, but forget particulars. Did he ever conduct the Elgar Symphonies, or only did not record them?

Sue - that was the quotation I so wanted. Is it on the DVD documentary by Paul Smaczny? I was looking for that this afternoon but fear I must have loaned it to someone.

JV - no, he never to my knowledge performed the Elgar symphonies. The Chicago Mahler 2 was the very first Mahler recording I ever heard, borrowed from Banstead Library. I remember the peacock-feather design on the box cover.

Dear David, It was your article in your blog some three years ago that directed my attention towards Abbado's Mahler creations in Luzerne. Thanks for that!

There is so much one should remember this great man for. And all he did was always about music and never about Mr Abbado's glory!

He founded the EU Youth Orchestra and opened it to musicians from "Eastern Europe" from the very beginning.

To me personally, the true revelation was his Ferrara live recording of Don Giovanni...

So much indeed, Jan, and I've not heard the half of it - not even that Ferrara Don G, though I marvel at the late Zauberfloete.

In the class tonight we watched the Gustav Mahler Youth Orchestra performance of the last two movements of Mahler Four - sheer perfection, crowned by the lovely Juliane Banse (at Lucerne Kozena ruined it with her gurning). But what a testament to youth - and I'm sure I saw some of today's soloists in the orchestra. Must check out the personnel.

My source, though I'm sure there are many, was Tom Service's book, Music as Alchemy. I am so sorry I didn't have an opportunity to see Abbado conduct live, but glad there are so many recordings. I have been listening to recordings of Abbado conducting Mahler all day.

I do hope, Sue, you'll add that Gustav Mahler Youth Orchestra Mahler/Schoenberg DVD to your list. Abbado's first Mahler 4 with the Vienna Philharmonic and Frederica von Stade remains my favourite, but the special circumstances of those young people playing like gods - not to mention the vision of a truly charming, music-friendly heaven - really got to us this afternoon.

But which Mahler 9 DVD are you referring to? There are 2; one with the Mahler Jugendorchester, and also a recording from Lucerne KKL with the Lucerne Fest Orch., both recorded within a short time of each other.

Cutting to the chase as ever, John: how are you? How remiss of me to forget your birthday earlier this month. I'll phone you, promise.

I thought it was clear: the Lucerne 2010 Mahler 9 DVD is The. Best. Ever. The Gustav Mahler Youth Orchestra Ninth I haven't been referring to, though I have it here: the performance dates from 2004. The GMYO (GMJO) Mahler 4 with Schoenberg's Pelleas und Melisande is the one of theirs I've been raving about.

Revisiting your notes on the Mahler 9 (2010) made even more intense by finality of his death. Thanks David.

The wonderful thing, wanderer, is that it was just an intense, so equally clearly the furthest any orchestra could go in expresssion, at the time. Even more meaningful if possible now, though I haven't steeled myself to watch it again yet.

David: You're probably aware of this, but in case not, or for wanderer and anyone else who might want to take advantage, medici.tv is offering the video of the 2010 Mahler's Ninth that Abbado conducted and about which you wrote those wonderful notes for free through 1/31/49. Also, the Berlin Philharmonic is offering a number of concerts, as well as the Smaczny documentary for free viewing at the moment. I have just watched the documentary. Beyond price to have the opportunity to see that. His response to Maximillian Schell's question about power and the conductor is magnificent. Such a great man.

I hope I don't wear out my welcome here, but had to come back to let you know of this: I posted a note to David Bloom (the conductor of Contemporaneous) about the Smaczny video, noting particularly what Abbado said about the importance of playing chamber music to the ability of musicians to listen to one another. There is a young pianist and composer, Gianluca Cascioli, whose acquaintance I've just made and who performed with Abbado. In response to what I'd written to David, he wrote this: "When we played Beethoven's Choral Phantasie in Reggio Emilia, at the very first rehearsal he wanted only the first parts of the orchestra. Only string quintet, and all woodwinds, a few brass and piano . In this way, we played in chamber music style and listened to one another very well and attentively. When everything was clear to everyone, we rehearsed with full orchestra : each leader or first part knew exactly how to guide "his" colleagues... I find this a very good and democratic method, because the main leader (conductor) gives importance to other leaders (in the orchestra). It was really a cooperation. He really acted like a "primus inter pares", but still he knew very well what he wanted and would kindly insist until he got it (at least : this was my experience)." I thought this was such a lovely vignette I wanted to share it. I see also he has a CD out that received top marks from one of your BBC Magazine colleagues, Misha Donat. Looks like he's one to watch.

That's good news about the Berlin Philharmoniker site, Sue. It's one I'd subscribe to if I didn't have so much (welcome) music to cope with already.

Cascioli's testimony is fascinating in detail though of course it comes as no surprise.

It's immensely refreshing when a conductor takes such intense interest in the work from the start. I mentioned that Wigglesworth and Jurowski like to be present at the first rehearsal. Now I've met the inspirational Bjarte Eike who leads Norway's Barokksolistene. He told me that the Oslo Alcina I saw began with the singers accompanied not by one piano or harpsichord but also a violin (presumably himself) and then two violins, so it was collaborative from the start. Utopian, but that's how it should be.