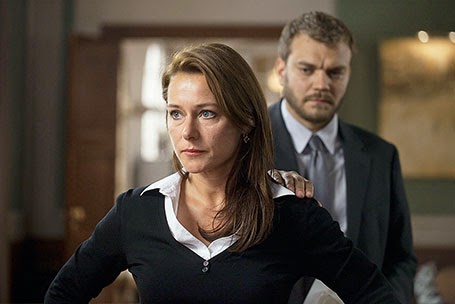 It came to me before the second series of Denmark's West Wing-worthy political drama was out. Nationality had nothing to do with it; I only saw Pilou Asbæk's magnificent acting as the tormented Kasper Juul fit for Shakespeare's Prince of Denmark, Sidse Babett Knudsen's authority tuned to a different pitch as Gertrude, Birgitte Hjort Sørensen's vocally well modulated beauty ripe for the steel that enters Ophelia's grief-maddened speeches.

Any number of fine Danish actors in the series would fit the bill of Claudius, depending on what the director wanted: inscrutability from Søren Malling  (TV editor Torben Friis and pictured below with Hjort Sørensen) or rugged threat from Mikael Birkkjær (the now ex-husband Phillip, so much more compelling than Birgitte's new love and 'celebrated British architect' Jeremy, a nasal-voiced blank canvas; let's not even look up the actor). Then there's old former communist Soren Ravn, as played by Lars Mikkelsen whom I find almost as attractive as his brother Mads: he could be a seemingly ice-cold Claudius who goes into meltdown. I'm usually a bit perplexed that Polonius, as the father of Laertes and Ophelia, should be as old as he's usually portrayed but were that the case, then Lars Knudson, the avuncular Bent, fits the bill. 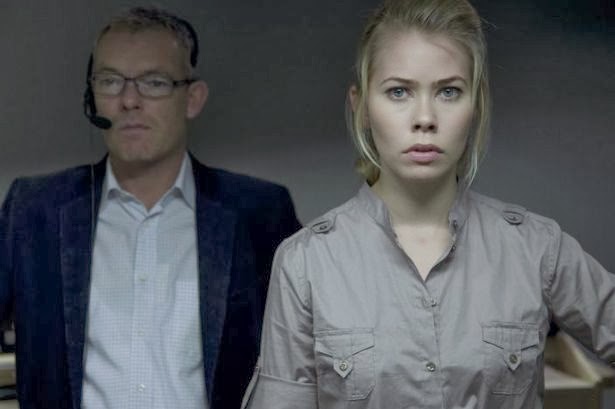 Since I spun that fantasy, the thespian influx has already begun, given our national mania for what is so broadly and erroneously termed 'Nordic Noir' (they're trying to sell Borgen as a 'political thriller', which it only occasionally is, though there's always a nail-biting dilemma per episode). Hjort Sørensen is possibly wasted in Coriolanus at the Donmar -  I haven't seen it yet and I'm no great fan of the play, brilliant though it is - while Knudsen is due on stage here anon, I forget in what. Now The Killing's Sarah Lund, aka Sofie Gråbøl, is down to play Queen Margaret in The James Plays at the Edinburgh Festival. It's one in the eye for American starpower on the British stage, and of course it says much for Danes' impeccable English - though my 'Borgen Hamlet' would be performed in the actors' native language.

We've been gripped by the interior psychology of The Killing - well, the first and third seasons, anyway, since the second was ruled out for me by a ludicrous spoiler-identification of the criminal on The Arts Desk - and the rather gorier, incredible scenarios of The Bridge, because in spite of the loose ends crimebusters Saga and Martin make a compelling double-act.

But it's Borgen which takes the palm for subtle characterisations down to every member, in Series Three, of Birgitte's New Democrats. We've been devouring it, somewhat late, on DVD.  I love the way each episode investigates the complexities of various issues - in this season, harsh immigration laws, pig-farming, prostitutes and the spectre of communism, to name but four. And have we not all shed tears over - spoiler notice - Birgitte's finally coming clean about her pre-cancerous treatment? 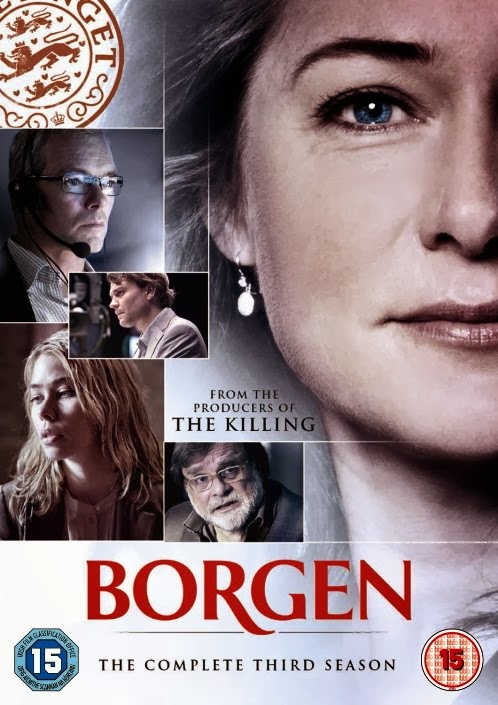 As in The West Wing, we're stirred - unless we're right-wingers, who of course would not enjoy the disciplined liberal sentiments - by the big speeches. I was interested to read creator Adam Price - a Dane, too, despite the English name - talking about how Borgen was never aimed at an international market; they'd be lucky, he reckoned, to get their neighbours picking it up out of solidarity. But of course truthfulness crosses national boundaries.

Maybe you have to watch Birgitte acting out the big what-we-stand-for speech in episode two of the third series, but I'll reproduce a bit of it here. She's reacting to the media pressing her on the group's defection from the Moderates: 'I know the journalists don't understand idealism, but at the core of this is a desire to change the world.' And later, with reference to the Moderates' intention of deporting immigrant citizens for small misdemeanours:

We're passing more bills which border dangerously on breaching the Constitution and human rights. Bills that are the waste product of political horse-trades. They're rushed through because they're too shameful to discuss. The people don't get to have their say and it's not just slovenliness. It's decidedly undemocratic. Democracy is dialogue. And that dialogue is fading out. New Democrats will fight to re-open that dialogue.

Sound familiar? Of course. And that's the beauty of it: how Borgen began by being local and ended up touching the universal.
Posted by David at 13:35

We missed the first two series and became totally hooked on the third. Really outstanding TV!

Series Three got off to the only rocky start, I think, Roger: Birgitte and Jeremy lounging around in Hong Kong made it look as if the only reason was the film crew wanted to go there. I watched no further in telly-time but TAD colleague Jasper said that, while Jeremy hardly gathered more weight, the rest was vintage. It is indeed, and it goes without saying that you have to watch the first two series on DVD.

I have just gone to our library system to see if Borgen Series 1 is available, and it is . . . a mere 23 holds prior to mine in the line-up! Perhaps it will turn up by the spring thaw . . . The "democracy" speech alone demonstrates the high caliber of writing here, along with intelligent content, and your post certainly makes the case that this should be compelling viewing. Thanks for the heads up!

PS: Was at a performance of the Juilliard's FOCUS festival last night, featuring Schnittke and his friends. Laurel Fay was on a panel beforehand--interesting to hear her in action "live." The performances were stellar. Schnittke's Quasi una Sonata, which I couldn't take in on listening to a recording beforehand, was utterly compelling in live performance.

Don't hold your breath, Sue, but they're going to make an American version of Borgen. I for one shan't watch it - when you live with performances as fine as these, you can no more exchange the Danish actors for others than you can see anyone other than Bergman's team in THEIR roles.

How I wish I'd been there at the Schnittkefest. As you know, the LPO/Michail Jurowski performance of his First Symphony was my absolute top of last year.

David: I'll look forward to the real deal if/when the library has it for us. Similar with House of Cards--while the US remake wasn't terrible, it couldn't possibly, and didn't, measure up to the original IMHO.

Re the Schnittkefest--how well I remember your report on the First Symphony, which is what set me on the trail of his music, in point of fact. The two Fest concerts I've attended have been interesting, though not always compelling--but given the wide-ranging survey, that's not so surprising. (PS, got a chance to speak briefly with Laurel Fay and learned she's working on a 2d edition of the Shos bio.)

Tonight I go back a generation, with the Kremerata Baltica playing Weinberg and Shos's Rayok, along with Britten and Pärt. Should be good. Then back to the final Fest concert tomorrow.

For the same reason I wouldn't think of watching the American remake of that compelling vampire film Let the Right One In (not that the genre per se is of much interest to me, but it was played out as a hauntingly-lit tragedy).

Lucky you with Kremerata Baltica. That looks like an amazing programme. As for Schnittke's output, it's so vast that it can't all be great. I still have as much of a problem with his bony late works as I do with Tippett post-1962.

The concert was excellent, the hall packed out, and the spirit much like that at the Neeme Järvi concert, though here the predominant nationality in the mix was likely Latvian. What an intelligent, coherent program, every piece on it worthy in its own right, and the standard of performance absolutely tops throughout. Rayok was hilarious. The bass Alexei Mochalov was terrific—fine and funny in all his 4 roles. (The woman to my right, no program in hand, was chuckling and nodding all the way through Rayok. She didn’t need the translation of the text; I suspect she’d “been there” then.)

I saw part of a recent episode of Borgen and I wasn't immediately grabbed, but obviously I need to watch from the beginning but not sure when I would find the time for a box set. (The Parsifal DVD is still in its wrapper, and the Kubelik "has been discontinued by our supplier and is no longer available"). The Killing (I prefer the the more ambiguous title "The Crime" which I believe is a better translation of "Forbrydelsen") was unmissable, although the body count became excessive, the second series was just too ridiculous, while series 3 was a terrific near return to form. Absolutely no interest in US/English version remakes!

Sue, I'm missing my lovely Icelandic fellow audience members already - such crowds for contemporary music there, and all ages, not just the clique we get here (or if it's an abundant crowd, then it's exclusively young). Covent Garden tonight was horrible by comparison.

Like I said, Howard, there's no chance of my ever seeing The Killing's series 2 since the murderer was divulged in a Borgen piece on The Arts Desk. I reckon great drama, which Borgen is, one would watch no matter what, but when it's a thriller, the identity is all. On which note watched The Sixth Sense with the godchildren up in Scotland and 'got' it quite early on.

The only American remake I can think of which is better than the original is The Birdcage of La Cage aux Folles - Nathan Lane just makes it for me in the funniest Dinner Party from Hell Ever.