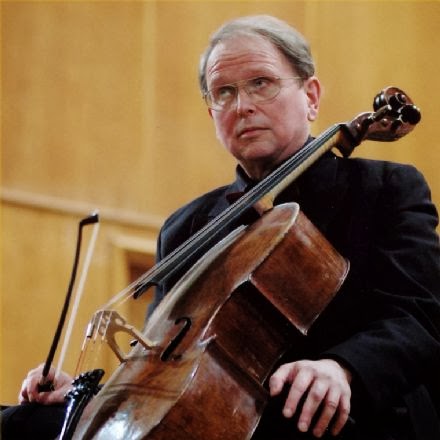 When great artists take their leave in their 80s, like Rostropovich and Vishnevskaya, Abbado and Mackerras, it's time to celebrate a life well lived. When they go too soon, the feeling is much more unsettling. Even in the case of an actor familiar to me only through his chameleonic galaxy of screen personas, Philip Seymour Hoffman, the sadness weighs heavy on the soul. But learning from Gavin Dixon's blog of Alexander Ivashkin's death at the age of 65 while I was in Reykjavik over the weekend, with no-one around who knew him to share the burden, was a uniquely disorienting experience.

Having stepped in to take his place on several recent occasions - not least for the huge pleasure and honour of talking to Vladimir Jurowski's conductor father Michail before my greatest concert experience of 2013 - I found that Sasha evaded my concerned enquiries regarding his health. That was disquieting, but I couldn't press, and I put it out of mind. As it turned out he was suffering from that awful disease, pancreatic cancer.

I've known Sasha personally since he arrived here in 2000 to take up the professorship of Russian music at Goldsmiths College, where I've intermittently taught (and would have done so, replacing Sasha, this term had the workload not already been enormous). He was a gentle and humorous person to talk to, though of course intense when we conversed about the great master he knew so well, Alfred Schnittke. 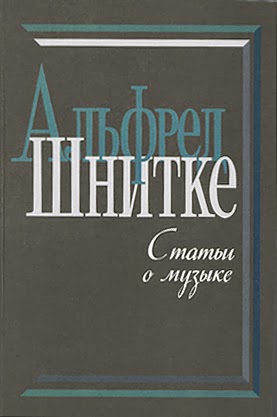 His short monograph on the composer for Phaidon is an absolute model of its kind: how do these Russians, and fellow musicologist Marina Frolova-Walker is another such, write English that's much more stylish than that of so many native academics? Only a few weeks ago I serendipitously picked up a copy of  the Schnittke Reader edited by Sasha in its Indiana University Press incarnation (cover of the Russian original pictured above). a priceless reference source. 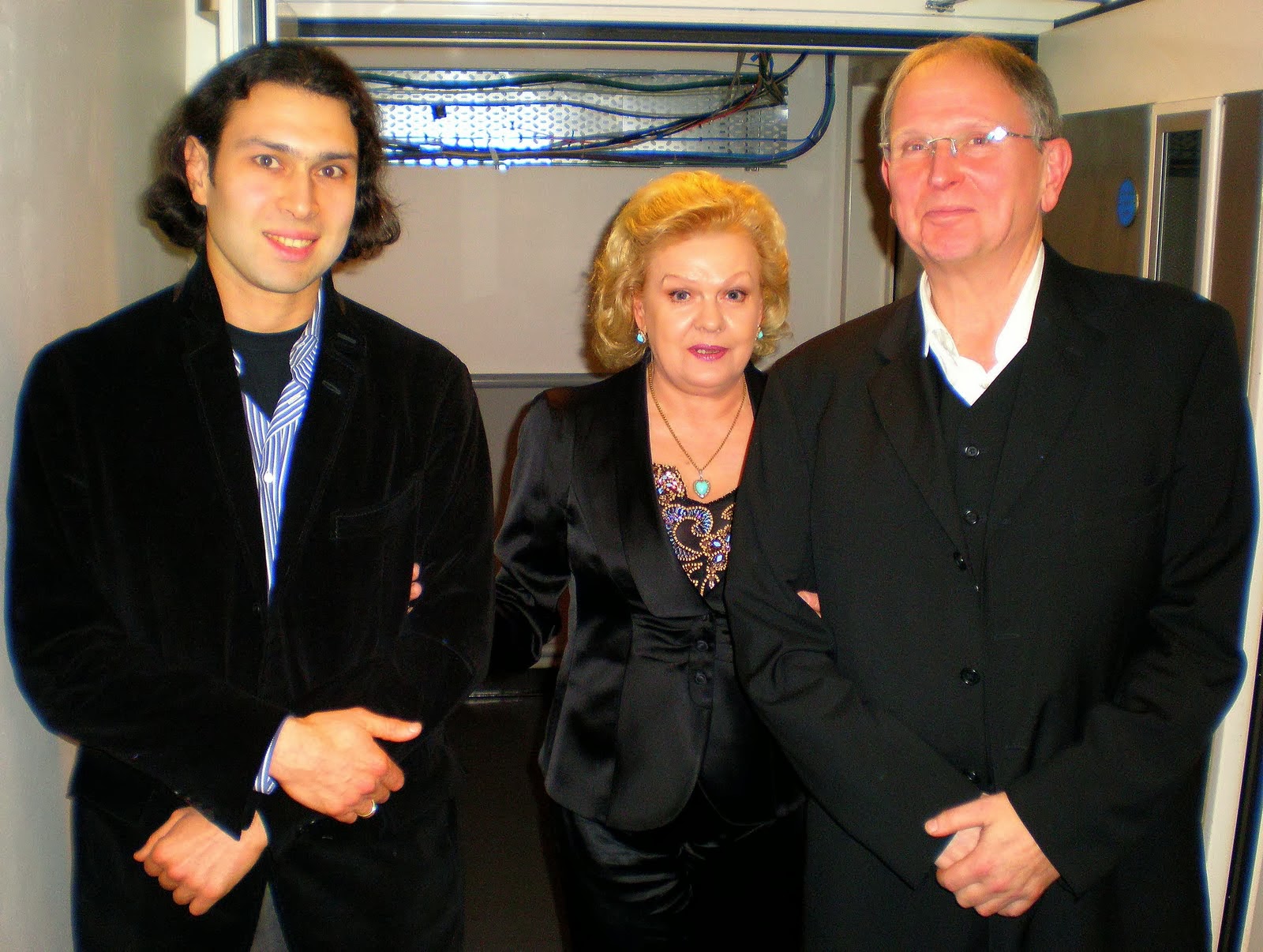 I took this photo on what was possibly the last occasion I got together with Sasha, chairing a Schnittke discussion which also included the composer's pianist widow Irina (centre), a regular recital partner, and Vladimir Jurowski*. Sasha was of course an entertaining and enlightening speaker; none of us present at his 2003 Prokofiev conference lecture-performance on the differences between Prokofiev's Cello Concerto No. 1 and its offspring, the Symphony Concerto, will ever forget it. He demonstrated how the Symphony Concerto seems more difficult to play than the original work, and yet is much easier because of the collaboration with Rostropovich on natural positioning. And Sasha had his own image of the last frenetic flight into the stratosphere, remembering the Russian image of entering heaven through the narrowest of entrances.

Unfortunately our last exchanges were unhappy ones, over our mutual dismay at the impending removal of the Prokofiev Archive from Goldsmiths to Columbia University. But I prefer to remember Sasha championing the Russian and contemporary repertoire as an outstanding cellist. Gavin Dixon's tribute ends rightly with the haunting epilogue to Schnittke's Peer Gynt ballet, another great dematerialisation for the cellist, this time with tape. Go over, read Gavin's wonderful memories as a Goldsmiths student and listen to that; but meanwhile let me give you instead the second movement of Prokofiev's Sonata for Cello and Piano encasing one of the composer's most beautiful melodies. It was a track I also chose for Radio 3 when Slava died - and that happened to be the world premiere performance, with Richter as the pianist and the ailing composer in the audience.


This was the second time I heard Sasha play the sonata with the great Dmitri Alexeev. The first was at the superb 2003 anniversary concert at St John's Smith Square organised by the seemingly indomitable Noëlle Mann. This performance took place - I think I'm right in saying - at her memorial concert, by which time we were also lamenting the loss of Prokofiev's older son Sviatoslav. I miss Noëlle especially and my unthinking first reaction was to phone her to talk about Sasha's death. It only took a few seconds to realise that of course I couldn't. 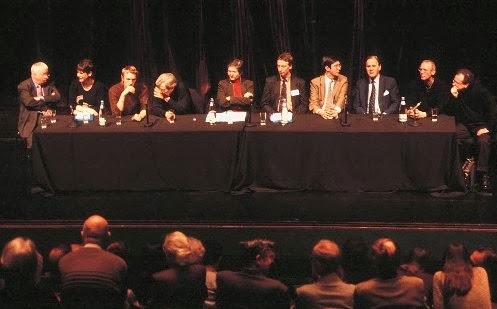 It weighs heavily with me that of the ten speakers photographed at this 2003 Prokofiev conference talk, four are untimely gone: the collegial Lynne Walker (second from left), Sir Edward Downes, Noëlle and Sasha. Sometimes life doesn't make the sense we think it should.

*who added his own homage in an e-mail this morning (5/2) and I reproduce it here with his permission: 'the loss of Sasha Ivashkin came as a terrible shock to many of us, though some knew he was battling with cancer since last autumn. Sasha was an incredibly kind and generous person, a real all-round musician. I feel really privileged to have known him, if not for too long - I only met him after starting the LPO job in London. His support of all our projects (especially the ones devoted to Prokofiev and Schnittke) was huge and I still have the sound of  his cello in that performance of Schnittke's Second Cello Concerto in my ears! I don't think I would ever have understood Schnittke's persona and music so well without having read Sasha's book.'
Posted by David at 13:47

The sad news was flashed promptly all over the world, even to Japan. I was terribly shocked by his untimely death. Yumiko (now studying in Kaunas, Lithuania) says she dissolved into tears.

When we visited his office at Goldsmiths in December 2010, Sasha commented very frankly (somewhat bitterly) on Raskatov’s new opera “A Dog’s Heart”. At another meeting in January 2012, he kindly showed us a precious copy of manuscripts of Schnittke’s oratorio “Nagasaki”, which Rozhdestvensky had just premiered in Japan. He talked very cheerfully and vigorously, and we cannot believe he’s gone…

I shall never forget his heartfelt performance of Prokofiev’s Sonata (the best I’ve ever heard, partnered by Dmitri Alexeev) at the Noëlle Mann Memorial Concert.

Consoling to hear from you, Shin-ichi, under these devastating circumstances.

I actually enjoyed A Dog's Heart, though it may work best as a music-theatre piece and the actual quality of the opera is open to questions. I got more out of it than Schnittke's Life With An Idiot. Never spoke to Sasha about it.

I'm sure the film I put up is of that very performance you and I admired so much. The other movements are also available on YouTube.

For some we loved, the Loveliest and Best
That from his Vintage rolling Time has pressed
Have drunk their Cup a Round or two before
And one by one crept silently to rest

Wonderful lyrics, David, like so many you post unfamiliar to me. Off now to check the source.

Sorry to hear of the loss of your dear friend.

Thanks, Laurent, though I would be misrepresenting our relations if I described him as a 'dear friend'. Dear person, though, he undoubtedly was; I had such a fondness for him, and a respect for his modestly presented musicianship.

Edward Fitzgerald's translation of Omar Khayyam's Rubaiyat was very free - in practise a rewriting. In 1979 Peter Avery ( King's Cambridge and lecturer in Persian) and the poet John Heath-Stubbs published a literal translation, pointing out that Fitzgerald added a "Victorian lushness" to Omar's words. Thus the original text of the quatrain above was

And indeed they both now are ( missing)

The Heath-Stubbs pith is also superb, and easier to remember. I'll adopt that - how it is indeed.

Proud to have shared something extraordinary, Roger. I asked the LPO what happened to the recording of the pre-concert chat with Michail Jurowski. And the answer, alas, is that there was nothing on the disc when they went to play it back. Kak zhal.

I've added Vladimir's little homage to Sasha above. Presumably you didn't know him or you would have remarked, I guess.

David, though you explain that Sasha was more of a dear person to you than actually a dear friend, it is hard to find a border between the two. People we know can mean so much to us in so many ways, and we often don't fully understand it, until their bar stool is empty, suddenly one day, and that's how it is. The Heath-Stubbs translation does go right to the heart of the matter, doesn't it? How hard for you that this dear person left so soon, and for you unexpectedly. Having his words and music may be good, but it must also be bittersweet.

What an interesting memory of Sasha speaking about "the Russian image of entering heaven through the narrowest of entrances." No doubt that, for this gentle soul, heaven is making easier the way in. -- Elizabeth

I felt bad not mentioning him in my post. But no, I didn't know him. Share your sadness though.

Once more how wise, Elizabeth. I suppose I didn't want to seem to be making false claims of friendship, but you're right: there are other ways of dearness. I cried for days after Rostropovich's death, for example, and I only met him on three occasions. But the music is the person, isn't it, and not many words are needed for that sort of communication. Thank you.

"But the music is the person, isn't it, and not many words are needed for that sort of communication." Those are beautiful words, and fitting. I thought I knew nothing of Ivashkin until you mentioned the Schnittke Reader. I, too, happened on it not long ago, on the staircase of a bookstore in the city (they line the staircases with books—it's hard to go past without discovering something wonderful you didn't even know existed). Ivashkin's vibrant, wide-ranging intellect is vividly present in his questions to Schnittke in the opening interview. How sad that he is gone so soon.

Yes, Sue, it's rare to find a writer who understands the subject from the perspective of a performer (and writes so well in another language). Elizabeth Wilson was Rostropovich's pupil and was uniquely well placed to write his biography. But since I think of Schnittke, and my only meeting with him, with awe, Sasha's connection is even more precious.