Floating through the Beyeler 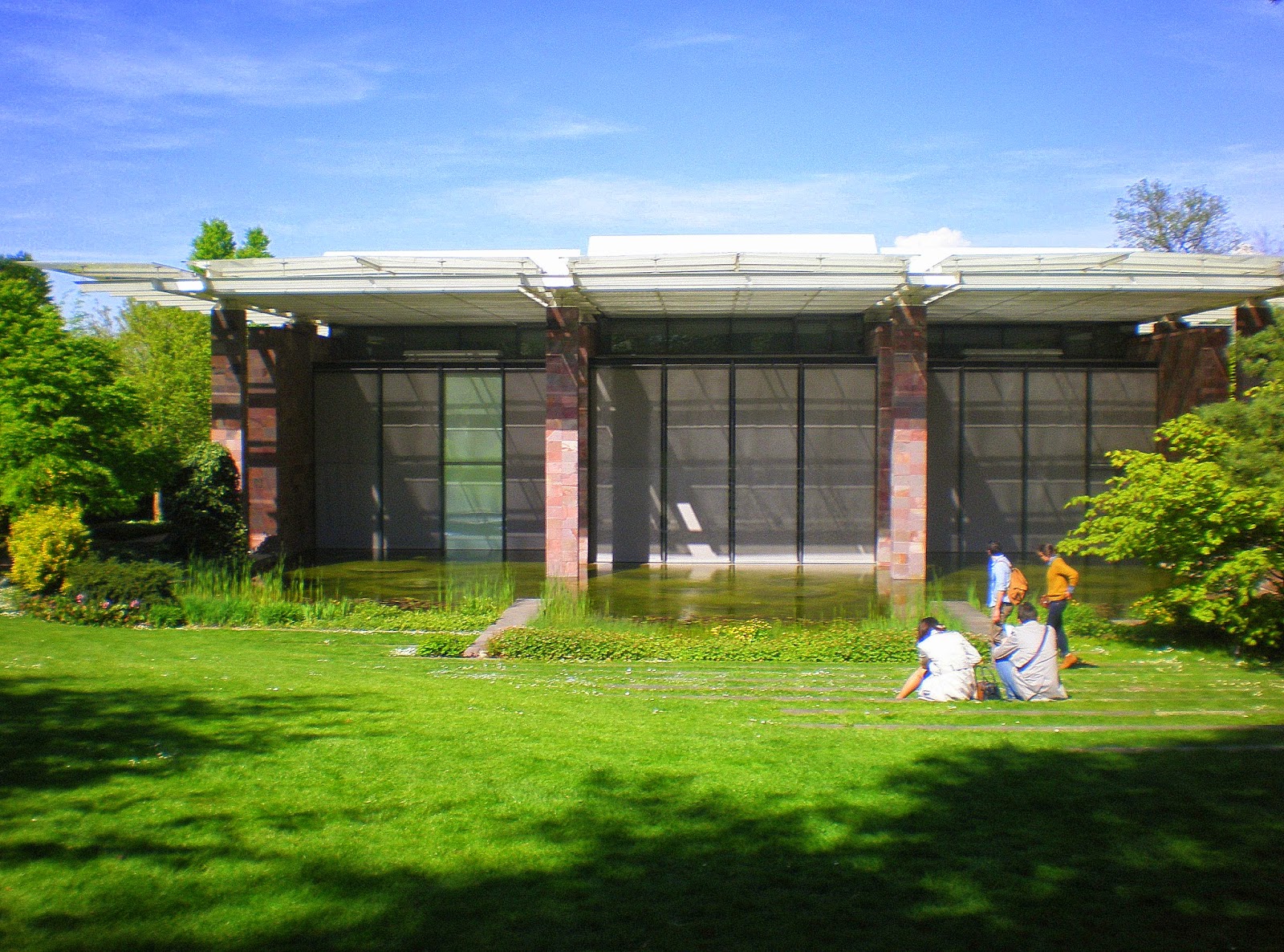 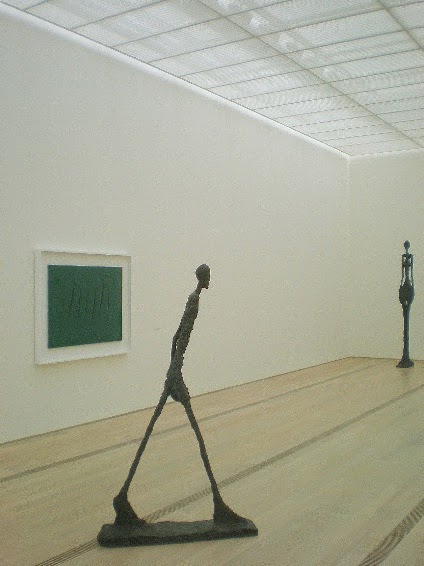 The Fondation Beyeler in Riehn, just outside beautiful Basel and right on the German/Swiss border, is one of the wonders of the art world - indeed, as a building, the wonder among artspaces in my experience. I've already written over on The Arts Desk about how I felt I was floating, first through the phenomenal Odilon Redon exhibition - hurry, hurry, it ends in late May - and then through the wondrous rooms full of choice 20th century masterpieces from the stupendous collection of Basel art dealers Ernst Beyeler and his wife Hildy. Here's Ernst with Picasso at Mougins in 1969, courtest of the excellent Fondation Beyeler website. 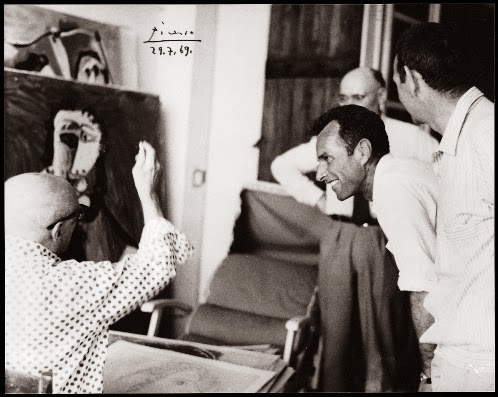 Beyeler was inspired to commission Renzo Piano on the strength of his designs for the Pompidou Centre (along with Richard Rogers) and for the Menil Collection in Houston, Texas, which in contrast to the Beauborg's 'originality and brashness' Beyeler admired for its 'quiet human scale'. A 'greenhouse' barrel-vaulted roof was rejected in 1992 in favour of what Roman Hollenstein calls 'an airy steel and glass construction with five parallel north-south "aisles" under an expansive, translucent roof with angled glass panels'. I've taken the liberty of borrowing a photo by Niggi Bräuning, Basel, from the website since we didn't have time to walk around perimeter of the lovely grounds. 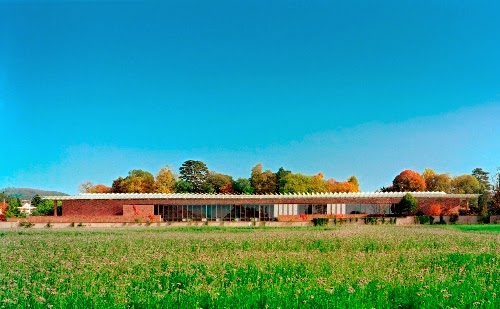 What Beyeler writes of the Menil Museum is perfectly applicable here: each is 'a building which is completely in the service of art, with a single-minded focus on optimal use of light and a natural modesty that delegates artistic pretence in architecture to the background.' Paradoxically, that only makes one respect, even love, Piano's achievement all the more. He's taken influences from fellow Italian Carlo Scarpa, Mies van der Rohe and Le Corbusier, and made the end result both his humane own and everyone else's. Hollenstein even thinks Hadrian's villa at Tivoli is evoked by the porphyry columns hovering above the water near the entrance. 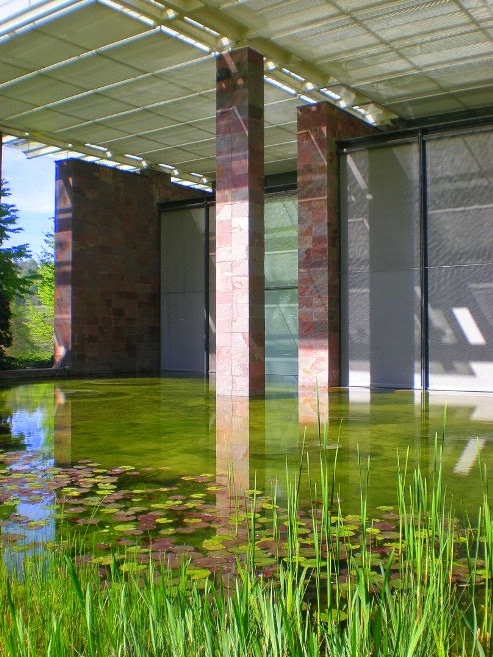 and I suppose there's a further mirroring in the conservatory that runs the length of one side. In our communal home for our old age we hope to share with friends who'll have us, if we live that long, this would be an ideal component (I can dream, can't I?). 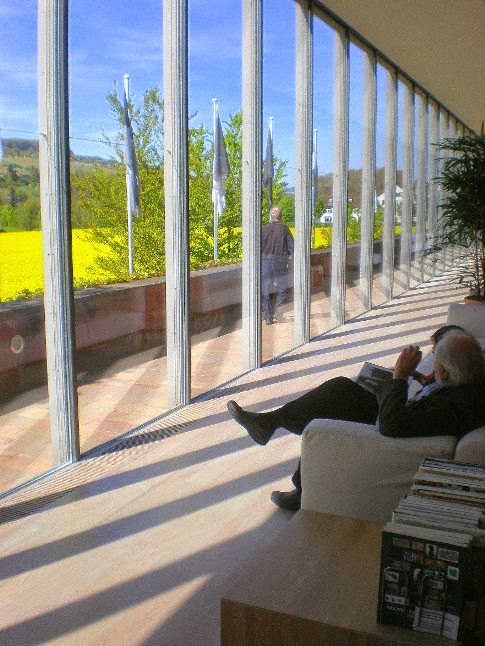 This is a dynamic space, not least because every time there's a new exhibition one half of the single-storey building remains open. Which means, essentially, a rehang/repositioning for what's on display of the permanent collection (I was delighted, by the way, to see two of the Beyeler's Matisse cut-outs in the superb Tate Modern exhibition a few days later; but oh, the come-down in terms of the big rooms for the big pictures).

Thus one might have expected one of Monet's vaster waterlily paintings to be where older photographs show it, reflected by the pond beyond. Instead, here there are luminous pastels by Odilon Redon in the exhibition zone. Incidentally, I only took my courage into my hands right at the end to ask if I could take room shots without flash, not having found any postcards of the artworks en situ. The answer was a friendly 'yes, and with flash, if you like' - but I preferred not to. Everyone seemed to respect the space, and I hope I did too. 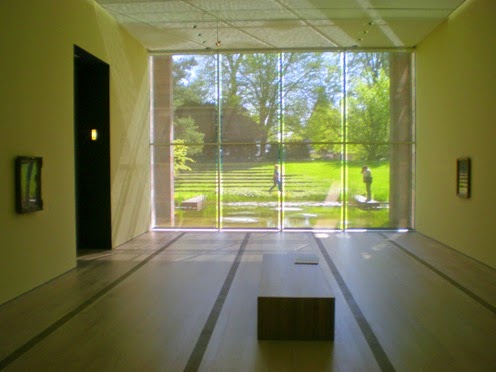 We first had our vision of Redon's genius in the Musée d'Orsay, and J has done some fine work, if I may say so, in pastels both copying Redon's originals and taking inspiration from them (I love one I dub 'Brünnhilde's Rock' which sits on the piano). Several of those masterpieces from Paris are here, including the heady Chariot of the Sun reproduced over on TAD. My other obvious favourite is the Buddha 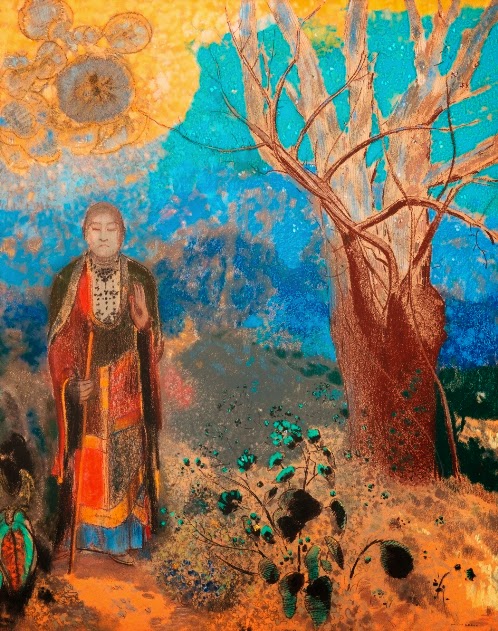 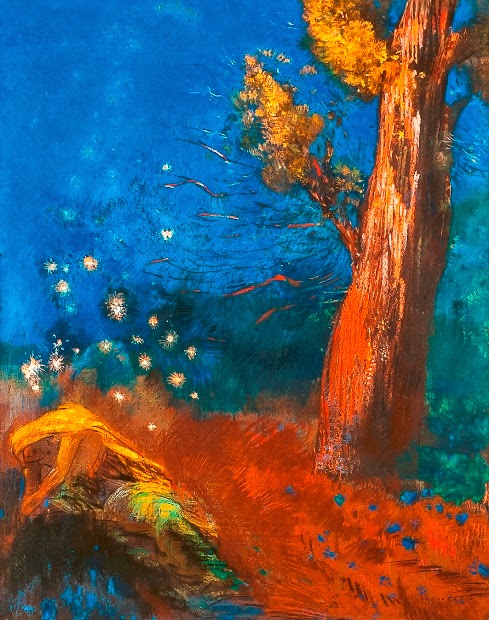 The phases of Redon's creativity aren't hard to chart. He was a late beginner,  leaving the architectural profession his father wished for him and first properly experimenting with charcoal technique in 1875, when he was 35. So the first two rooms, the only darkened ones in the Fondation, were devoted to the angels and monsters of the 'Noirs' and the lithographs. Most haunting is the all-seeing eye - there's one in a lithograph from the series Dans le rêve which could be an inspiration for a production of The Magic Flute. This Cube is rather more sinister. 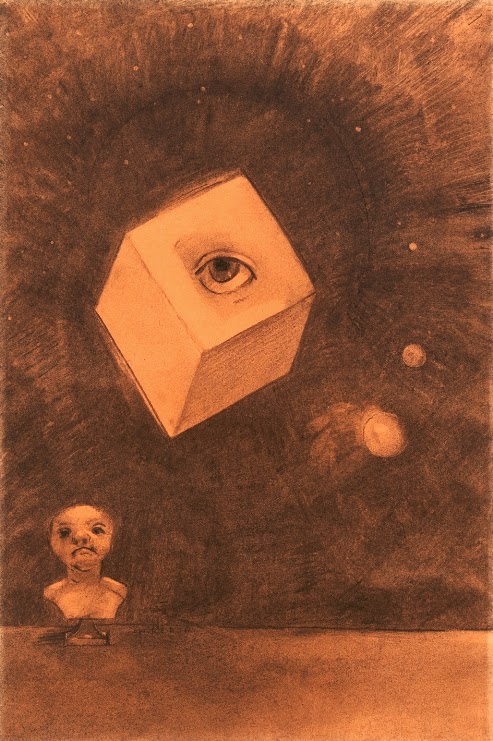 and later in 1914 Redon returned to the theme in oils for Le Cyclope. 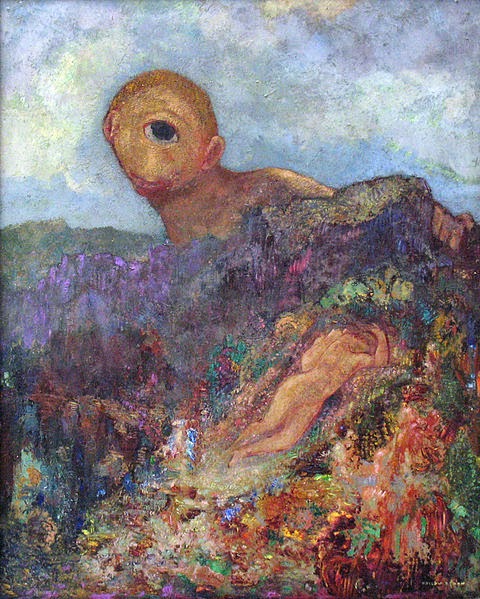 The first move from darkness to a special kind of light comes in the third room, with a work acquired by the pianist Ricardo Viñes - Matisse was another enthusiastic patron - part in charcoal, part pastel, described by Redon as 'columns all round an indeterminate stained glass window. To the right, below, an angel holding a sort of skull.' 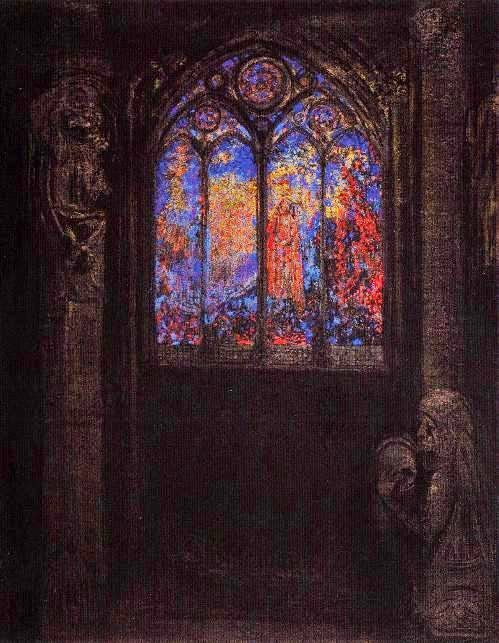 As we move on, we find that it wasn't that Redon didn't depict real human beings in detail very often because, like Turner, he was incapable; there are three marvellous female portraits framed by flowers, followed by floral fantasias. Religion and mythology are very often the thing, though, from Mesopotamian and Greek themes to Parsifal and a Virgin linked to natural history. The exhibition is bracketed by four giant fragmentary landscape frescos painted for the Burgundian chateau of Baron de Domecy and a gentle room of mythic boats taking wing.

Then you're out in to the Beyeler Collection proper, elevated by the space around the Giacomettis, 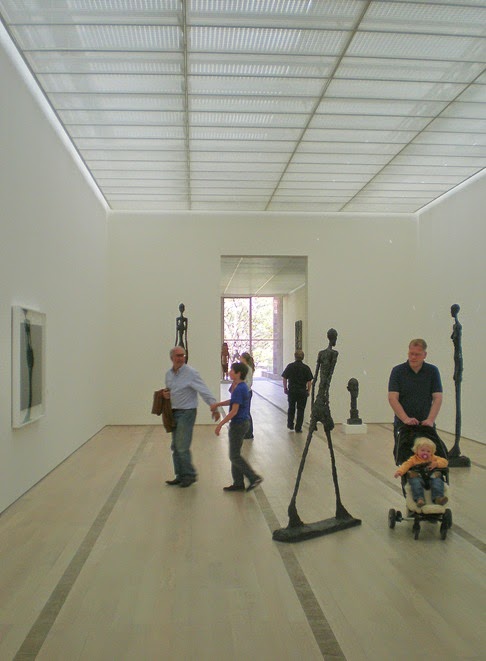 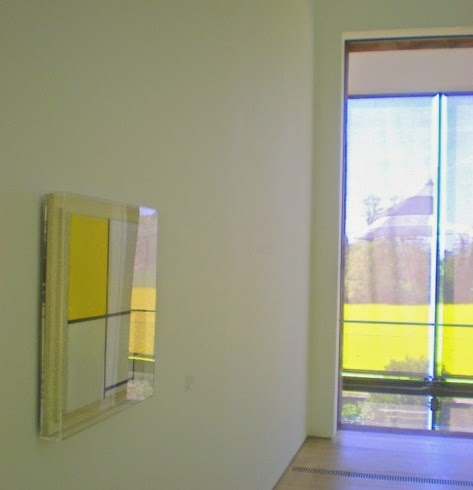 and a Rothko 'chapel' at the very heart of things which makes you appreciate how crucial it is that Rothko's paintings are seen together (though I take the liberty of isolating this one). 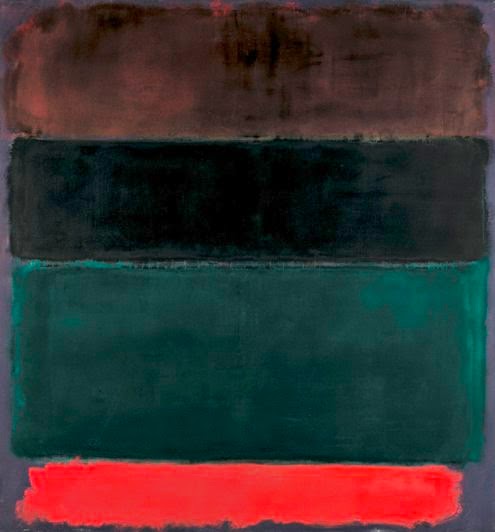 The best is possibly the last one comes to, a vast room facing the other end of the garden from the entrance, mixing Beyeler's objects from Oceania and Africa 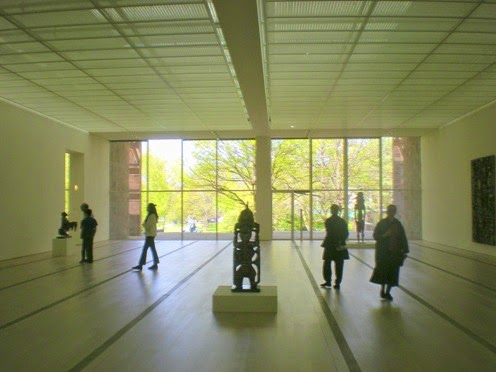 with two colossal canvases by Anselm Kiefer. Lilith is an apocalyptic skyscraper scape seen from above, while Your Age and My Age and The Age of the World (1997, the year of the Fondation's public opening, pictured on the left below) constructs a pyramid of oil, emulsion, shellac and ashes hung with terracotta fragments 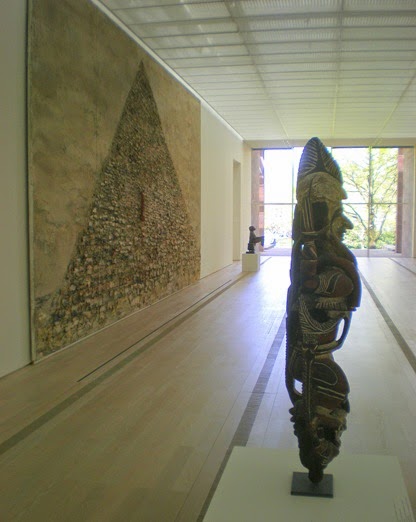 Had we more time, we could have retired to the commercial world of the tea shop well set apart in the main farm building, but there were only minutes for a quick spin around the garden and then the tram back to Basel - of which more cries out to be described - and next the train to Zurich.

Next, here and on tomorrow's Radio 3 Music Matters, another rave about another miracle in a large space, Khovanskygate in the big top of Birmingham's Cannon Hill Park - simply one of the most amazing experiences, certainly the most singular, of my opera-going life.

Permission for reproduction from the Fondation Beyeler as listed above, with additional picture details and copyright acknowledgments as follows:

Oh, so lovely. I didn't know of the Beyeler's existence and probably never would have but for this and your post on TAD. You bring to mind Renzo Piano's widely admired renovation/expansion of the Morgan Library in New York, which transformed a dark warren of rooms into a feast of light. How I wish I could get to the Beyeler in time to see the exhibit of Redons. I've seen and liked just a little of his work, but the way you gather Redons together here makes clear how much more there is to know and see. Your photograph of the Mondrian and accompanying rape field is perfect, too. I look forward to your next installment. I'd no idea about Basel and will be glad to learn more.

Nor had I before this trip, Sue; having only passed through fairly often on the train, which doesn't unveil the beauty of the place, I was taken aback. And the atmosphere is anything but sterile, perhaps because it's a border town. Much as I love Zurich, I don't think from what my opera-chorus friend says that I'd really want to live there, but Basel is another matter.

I'd only vaguely heard of the Beyeler before, too, but now I'm not surprised that it's Switzerland's most visited museum.

And I'm glad you love Redon. He seems to me just the right side of kitsch and whimsy, a real one-off and at times a genuine visionary. I thought J's 18 year old goddaughter Maddie in Zurich, who does sci-fi-ish, comic-book sort of artwork, might like it so I hope she goes before 17 May.

At the risk of too brief a summary of the works of Pitirim A Sorokin ( his Social and Cultural Dynamics runs to hundreds of pages, not to mention his Dynamic Forces of Creative Altruism ; great fun)it seems to me that it would be correct to apply to the art forms of the late 19th century his description as sensate, impressionistic or realistic, without a higher Idea informing the whole ( such as was the case in the Renaissance, or the periods of High Christianity ). But then there arrived a wide dissatisfaction with this state of affairs - but no one knew where to go. The pictures of Picasso over the 20th century show the path of a genius searching, and extreme controversies arose from those who did not realise that we had to be in a period of cultural confusion - such as Munnings with his realistic horses calling Picasso a charlaton. But now I think a consensus is emerging. David, you exemplify this in your analysis of current architecture ( some wonderful - leaving the lack of insight of the sixties behind)and current music, and I have noted that young people ( singers, musicians etc) are as comfortable with new things as with old. Such a development could perhaps lead to a synthesis of the sensual and the intellectual, which Sorokin would see as the ideal balance. Actually I distrust these world historical theories, but I do believe that a balance has emerged

Eloquently put, Sir David - and I agree. I do feel a sea change now in opening up to things outside my usual ken, and you of vastly greater years and experience are a good example to us all of keeping curiosity alive.

Hello David,
sorry, this is not a comment but a very utilitarian question: whom did you contact at the Beyeler to obtain permission for the reproduction of the images you have used? I've tried through their "info" address but there has been no reply so far.
Many thanks.
Sara