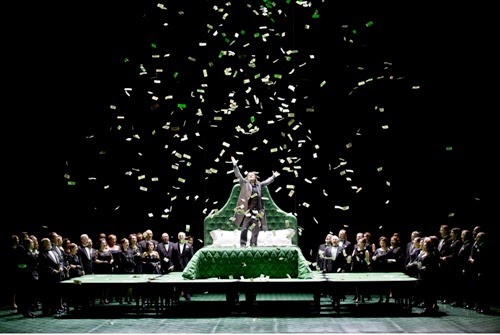 It was a happy coincidence that ever-stylish director/designer Robert Carsen's new production of Tchaikovsky's Pikovaya Dama happened to be running at our old haunt the Zurich Opera following on from the not-too-hard-work Basel stint of my latest Swiss trip (which you can read all about over on The Arts Desk - though I have more to add on the city and the dreamlike Fondation Beyeler). Andrea Chénier was an optional extra, one to tick off as I've not seen it on stage before. Trouble is, it put me off Giordano's very sub-sub Puccini manner so badly that I probably won't want to see even Jonas Kaufmann in the title role this coming Royal Opera season.

Both evenings offered outstanding and not so good in equal measure. Carsen's concept was very austere and a little hard-worked in its insistence on keeping the whole thing green, black and white in entirely indoor settings. It's also the first Queen of Spades I've seen to shed some of the dramatically peripheral but musically accomplished Imperial padding - not least the opening chorus with the delightful post-Carmen boys'-army routine and the long divertissement of the faithful shepherdess which Richard Jones made work so brilliantly as sinister puppet-show in his Welsh National Opera production. 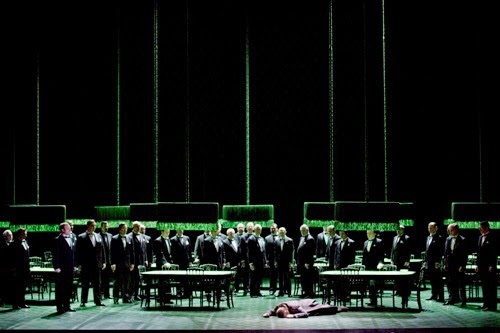 We see the final tableau at the start, as if it were inevitable fate (all Queen of Spades images by Monika Rittershaus) - the same happened on Saturday in Yoshi Oida's also very mixed Lyon Opera production of Peter Grimes - and Carsen exchanges a sunny day overshadowed by storm in St Petersburg's Summer Gardens for the gambling tables. The stage is cleared for Lisa's bedroom - the ladies simply take off their shoes and frolic in petticoats - while the Countess's chamber has an enormous green bed and a dressing table, though this crucial scene lacked most of its tension given Doris Soffel's still too-young and anything but pathos-filled Countess. Perhaps the point was that Hermann woos the older woman in the same key as he does her ward, and sometimes confuses the two. 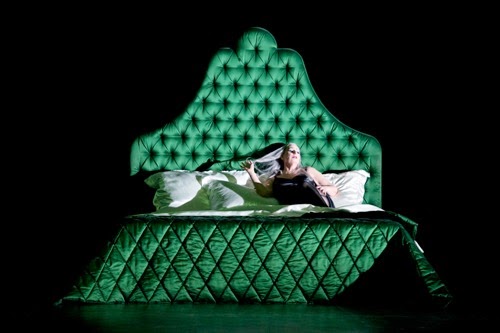 Best was the funeral/barracks sequel: the variable Zurich Chorus, overworked at present, sounded magnificent and mysterious with their backs to the audience, while Hermann wheels the Countess's coffin forward for the conflict with the ghost. 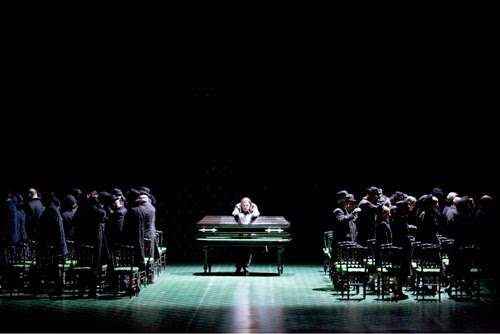 We drew the wrong card with our Hermann, it seems. Misha Didyk had been off sick, replaced at first by the vocally resplendent Latvian heroic tenor Aleksandrs Antonenko (one of the best Otellos I've heard, if not seen). But Didyk, it seems, insisted on coming back for several performances, and so we got a tenor who certainly couldn't act and who was so vocally in trouble that he didn't even try some of the top notes. Lucky I worked this out and checked, because there was nothing in the programme to suggest we weren't getting Antonenko. 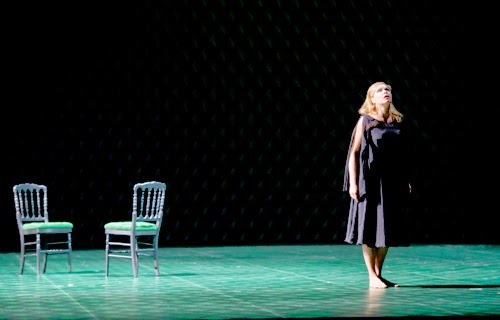 Forcibly raising Didyk's game in the 'canal scene' was Tatiana Monogarova's Lisa. A wonderful, truthful and heart-rending actress, she's one soprano size too small for this treacherous role, but went for bust in the aria and duet, making both the most lacerating I've ever witnessed on stage. There were a typically stiff, vocally secure Yeletsky from Brian Mulligan, and an excellent Tomsky from Alexey Markov, secure and vivid throughout the range. Good though it was to see Jiří Bělohlávek in action again, he got variable results from the resident Philharmonia Zurich, not up to scratch in brass and wind departments; some scenes burned, others seemed too middle-of-the-road. Happy to have seen it again, as if I needed reminding of Tchaikovsky's genius in every sphere of the extended drama.

Genius Giordano was not: I'm amazed Andréa Chenier and the even tawdrier Fedora remain in the rep, but I suppose it's a singers' market. Well, the composer got the vulgarity he deserved from the revived production of Zurich regular Grischa Asagaroff, whose Cav and Pag I saw here back in 2009: very conventional direction in a would-be-regie casing, hideously designed by Reinhard von der Thannen (production image by Suzanne Schwiertz). 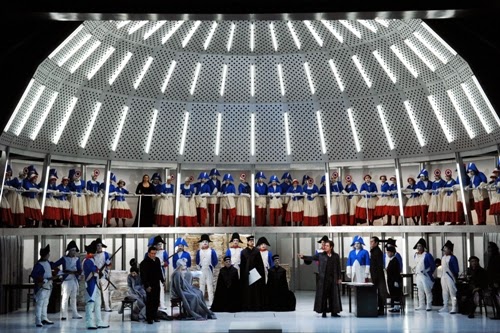 As far as I'm concerned, there are only two things worth reviving about the score: heroine Maddalena's 'La mamma morta', immortalised not only by Callas's stunning recording but also by how Tom Hanks reacts to it in the film Philadelphia, and the final duet as she and poet Chénier go to the guillotine. Without a doubt we had a touch of the Corellis from Korean tenor Yonghoon Lee, who makes an amazingly idiomatic heavyweight-Italian-tenor sound even if it wasn't a pretty sight to watch him brace for the high notes. I've not seen so total a stand-and-deliver performance ever before: Didyk looked like Olivier compared to this. 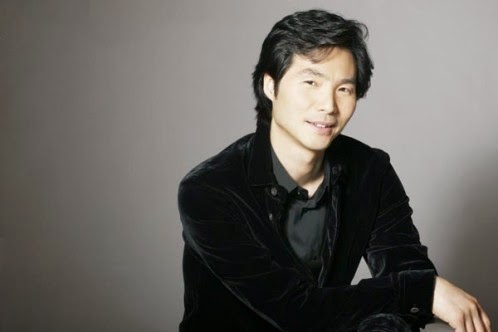 But then, ah, then there was the sublime Martina Serafin, whose Marschallin in Vienna had seemed Crespin-worthy to me some years back. Such bearing, such handsomeness, and more colour in the middle range than I think I've ever heard from any other soprano. I kick myself for missing her Tosca at Covent Garden but hope we'll see more of her in the great Verdi and Puccini roles, for only the slightly lighter Harteros is a match for her in such Italian repertoire. Alas, there are no production images of the revival, so I've stuck to portrait shots. 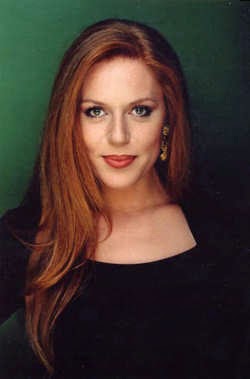 The rest was good to poor: a stalwart Gérard from Lucio Gallo, no-one else really able to make anything out of the excessive number of characterless smaller parts, and veteran (85 year old) Nello Santi in the pit, conducting with expected style but perhaps not able to hear too well since the orchestra was relentlessly loud. Anyway, we certainly had our share of A grade stars in those two performances, so that's one respect in which respect I feel blessed.
Posted by David at 12:52

Serafin as Sieglinde led all of us who heard her to rush back to hear and see her as the Marschallin. So glad I didn't let that one get by. A friend didn't find her "sexy" enough, but I thought she fit the role nearly as well as Schwanewilms. The production was the old standard-bearer, which even I have seen now twice, but though faded, it is attractive. Sadly, audience behavior in the final trio/duet reached a new low . . .

When you say, re the Giordano (and how well I remember the impact of the aria in Philadelphia, too, though I didn't know who wrote it), that it's a singers market, do you mean that singers particularly like to sing this opera for some reason? And "a touch of Corellis" I'm curious about, if you can explain . . .

Your "not-too-hard-work Basel stint" struck a chord: I was recently asked to "cover" a concert and write a review of it for publication (if the result is acceptable, that is). Faced with the prospect, my appreciation for those, like you, who do this professionally and do it so well, only grew!

Re Chenier, yes, it's a belter tenor's piece - not many of those around, but you must know Franco Corelli, the matinee-idol tenore eroico of the 60s? Only Del Monaco ran him close for thrust as our revolutionary poet. And here we have a partial rebirth, which I like to think is more than just an impersonation.

Keep us posted when you're up and running in print.

In re Corelli, I have heard the name, but that is all, another example of the gaps in my musical knowledge! On the "in print," I will keep you posted. Just home from the Emerson playing a terrific program of Shos 13 & 14 and Britten 3. All three such wonderful quartets. The program notes didn't indicate this, but isn't the Burlesque in the Britten an homage to Shostakovich? I do think, if one were to listen to it without knowing who the composer was, Shostakovich himself would be a pretty good guess!

Yes, I think so. Of course the Shostakovich influence was strong from an early date - the central Grimes Passacaglia wouldn't be what it is without the parallel example in Lady Macbeth of Mtsensk. Yet the cross-fertilisation was strongest from the point when the composers became friends (and remember Shostakovich thought the War Requiem one of the 20th century's two greatest works, Mahler's Das Lied von der Erde being the other).

I treasure Britten conducting Shostakovich's Fourteenth Symphony. Death in Venice, which of course is hauntingly referenced in the Third Quartet, quotes the 'Tre lilii' melody in the Strawberry Seller's call.

Both composers' late works are marvellous places to mine meaningful use of 12 tone note rows, especially the opening of DiV and the slow movement string solos of the Fifteenth Symphony.

Well, yet another comment of yours I've got to file away for reference, with all that great info on two of my favorite composers!

And now that I've had a gander at your TAD piece, I know the answer on where "Plutonian Ode" comes from. Does not appear to be one of Ginsberg's better efforts, ah, well. You do a wonderfully articulate job of skewering the related musical work, no surprise to me--and the Fondation Beyeler looks and sounds wonderful, from what you describe. "Float" is the perfect word, on looking at the photograph of the Giacomettis.

And 'floating' was the word I already had in mind for further reflections on the Beyeler, due shortly.