From Cléo to Florence in 90 minutes 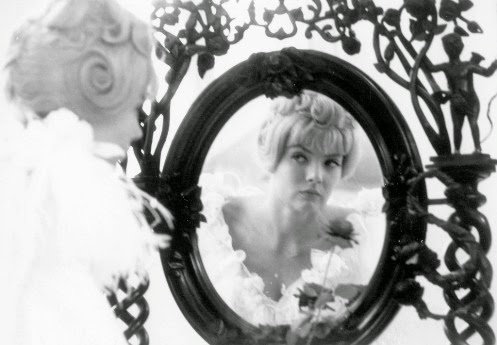 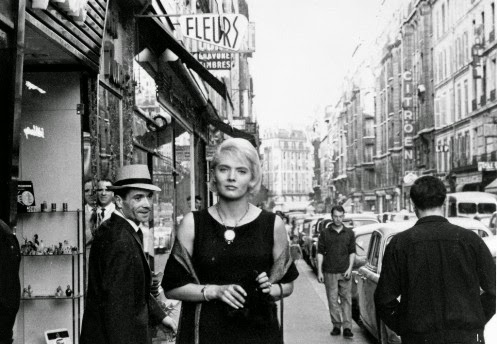 J came back from the Sheffield Documentary Festival clutching a DVD of a film he'd seen which he found absolutely entrancing. Agnès Varda's Cléo de 5 à 7 is a documentary-style work of highly artistic fiction, charting an hour and a half in the life of a pop singer who's waiting to learn the news of a biopsy (strictly, then, it's Cléo de 17.00 à 18.30). There are parallels here, among many others, with La Dame aux camélias, but mainly playful or enigmatic ones. I should have twigged earlier that 'Cléo' is merely a chic construct, for up to the point at which I started falling asleep on the sofa and switched it off half way through, I found it stylish in a very French, a very Parisian way, but slightly irritating and inconsequential. I suppose I should have been charmed by the trying-on of hats and the appearance of a young Michel Legrand as 'Bob le pianist' in the studio apartment Cléo shares with a playful kitten. 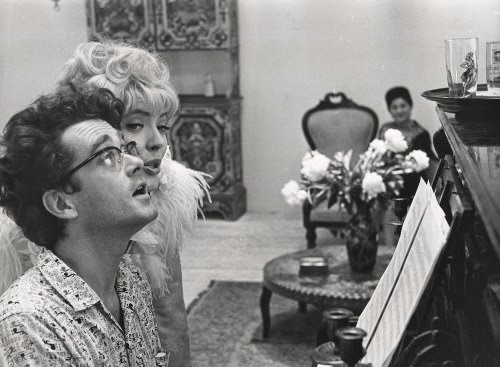 And how glad I am that I picked it up again, home alone, the following evening. For it was just after the extraordinary Legrand song that singer-actress Corinne Marchand as Cléo delivers with such feeling that the mask comes off - or, more precisely, the wig and the polka-dot dress. Black garb and dark glasses suggest Cléo, now her real self as Florence, is going into mourning for her life. Cue existential crisis, lightened by the arrival on the scene of vivacious artist's model friend Dorothée (Dorothée Blanck, more or less playing herself, as Varda later said) 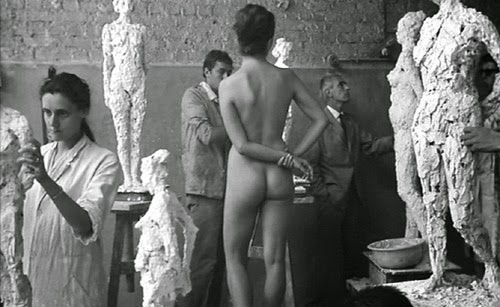 and then by a soulful soldier on leave from the Algerian War (Antoine Boursellier) whom Florence meets - it's emphatically not a pick-up - in the Parc Montsouris. 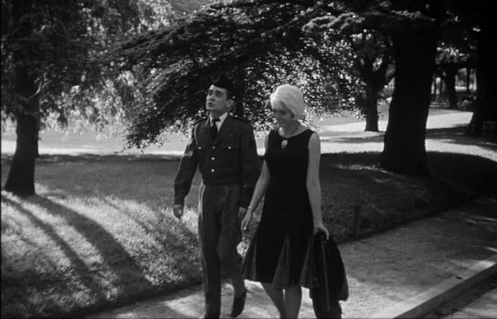 So enchanting did the Parc look in the special camerawork, reminiscent of Bergman's Smiles of a Summer Night and backed up by the most haunting number in Legrand's score, that I wondered why I'd never been there - nor to the spacious garden yard of the Salpetrière Hospital where the action comes to a very poetic, unbearable-lightness-of-being open ending. By the way only the opening, with an intriguingly filmed tarot sequence, is in colour. 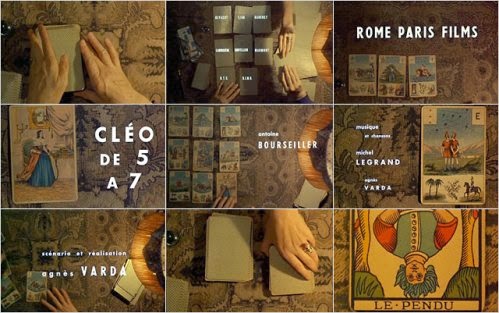 The film's meditation on mortality is deliciously complemented by a documentary Varda made reuniting the actors some years later - especially revealing on how she tried to reshoot the very last scene because the camera rail was visible in the original, but couldn't recapture the chemistry between her two leads - and her delightful commentary on the five-minute short woven effortlessly into the film at a point where she feared the viewers might begin to get bored with the leisurely pace, Les Fiancés du Pont Mac Donald. It turns out to be a witty bagatelle on the theme of trying to get Jean-Luc Godard to remove his dark glasses, and watching it after the insights makes it even more charming. Anna Karina plays "Anna", and I'm sure a cinéaste would know the other participants; I don't.


Years ago a friend got us to watch Varda's Jacquot de Nantes, and I can't say it left a great impression. But now I'm going to seek out as much of her other work as I can find. Another (10 minute) short among the extras, Les dites cariatides (The So-Called Caryatids [of Paris]), taught me, amongst other things, the origin of the word 'caryatid' and Baudelaire's miserable end. It's an absolute gem, pure magic in its weaving of music (Rameau on the piano and the song referred to below), poetry (Baudelaire beautifully read by Varda) and image. It seems wrong to show just this minute, all I could find on YouTube, but it does include the most remarkable cool chanson, one François Wertheimer singing (who'd have thought it) Offenbach.


Like Cléo, and no doubt other Varda films I have yet to see, Les dits cariatides celebrates Paris, and not the parts we'd necessarily know. Eat your heart out, Woody Allen, and go make a decent film after all these years of traveloguing rubbish (I know the Blanchett vehicle may be different, but friends I trust say not).

Went to the cinema for the first time in months last Saturday to see a film we might well call Mason from 6 to 18. Certainly I don't know why Richard Linklater's Boyhood isn't just called Childhood, since for at least the first 20 minutes the protagonist's sister, played by Linklater's own daughter Lorelei, is even more interesting. But as in Fanny and Alexander the male filmmaker is more interested in an alter ego growing up. Which, famously - though I managed not to read anything about it before going - Ellar Coltrane, playing Mason, did while the film was being made over 12 years. 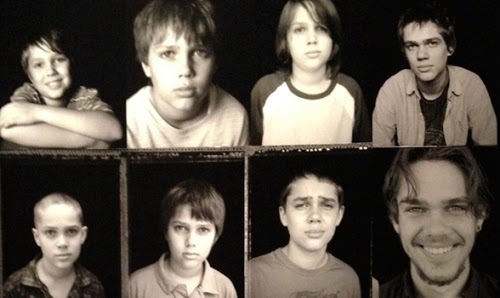 There are many touching things about him - the refusal, for instance, to be bludgeoned by adults in his teens into conformity. But deepest sympathies really rest rest with his confused mother Olivia, a luminous performance from Patricia Arquette: thanks to her, the film could equally well be called Motherhood. Bring Ethan Hawke's complex dad into the picture, and you have Parenthood (as well as further touches of the feckless parents in What Maisie Knew). The site on which I found the above composite shot has a fine review by Mark Greene which explores the issues more deeply than I've time for now. Anyway, take your pick, enjoy which angles catch your fancy, it's that kind of a movie.
Posted by David at 17:22

Apologies, this is a slightly convoluted way of getting in touch, but it was the best I could think of! I wonder if I might pick your brains about Music Appreciation at CityLit? There's a contact form on my website: www.katyhamilton.co.uk. Would be v grateful if you could spare a few minutes to offer some advice... Many thanks in advance! Katy

It seems further convoluted to use a contact form on your website, Katy. Ask away in another message and I won't send it public. Then you can give me your email and phone number if you wish to discuss further; I'd be happy to help.

I'll soon be making it clearer here, but I've left the City Lit after 25 years, 23 of them happy, owing to an ever more impossible situation. Already it turns out to have been a good decision.

Well, it seems we're all movie watching as of late! Last weekend we saw two in a row, unheard of for us, and enjoyed them both (even more unheard of for us). They're not of the "art" caliber of those you name here (A Most Wanted Man and Le Chef), but we were well entertained. Will have to keep my eye out for Varda films, and, while the premise of Boyhood put me off, you make clear that its scope is wider than the title, e.g., suggests, so I may have to reconsider that one. I had a good laugh over your "Eat your heart out, Woody Allen, and go make a decent film after all these years of traveloguing rubbish." Ouch! He's a bit like Joyce Carol Oates, I think, of whom it's been said, "she writes too many books." She has some good ones, but they get lost in the barrage. So, too, with Allen. And of course he's a very peculiar man.

Praise be that someone else here cares about film. Do watch Boyhood: you'll find it very true and real, and even the irritation you might occasionally feel is natural.

I get the feeling WA has been making films for the sake of it for years. I just couldn't face Blue Jasmine, much as I love La Blanchett, and opinion remains strongly divided. I'll wait for the DVD. Another pisseur, as Muriel Spark put it in what in itself was not a very good book, is Peter Ackroyd: how does he do it? Yet his Dickens biog is colossally great.

We did not love Blue Jasmine (even though La Blanchett did a splendid job). After, I asked the Edu-Mate, why is it that King Lear is so moving, and this is just depressing without either end or reason. "Redemption," she replied.

It's interesting that there isn't really an equivalent in English for the '5 a 7', that genteel French way of identifying the copulatory afternoon interlude between usually illicit lovers...

Agreed, Sue - even if the redemption isn't ultimate, there has to be a glimmer of enlightenment somewhere along the doomy path. Timon of Athens is a tragedy I can think of which is 'lightless'. And Hofmannsthal used that term of his adaptation of Sophocles' Electra - but then it became something else with the dimension of music.

I didn't know that French term, Roger. Interesting that Cleo brushed off her older lover and that the relationship she does forge is platonic, if open-ended. But you remind me of Alice Ford's advertised seduction time for Falstaff - 'dalle due alle tre' which, because the English translation has to fit the catchphrase, becomes 'from eleven 'til one'.

You want divided opinion? Try Calvary. I hated it.

Another lovely Frenchism is 'entre chien et loup' for what we might call twilight.

Not seen 'Calvary', wanderer. Was tempted. Reasons (and reason)? Any thoughts on the films in question?

I like that second French soubriquet, though it makes evening seem threatening, when it's usually the loveliest time of day. 'Hour of the Wolf' or 'Vargtimmen', to use the Swedish title of Bergman's scariest film, is on the other hand perfectly apt for the unconsolable time of 4am.

In reflecting on marriage after the assignments timed for 5 to 7, Mrs Patrick Campbell referred to "The deep deep peace of the double-bed after the hurly-burly of the chaise-lounge

'Hurly-burly' makes it sound so unsensual. Maybe it was. The French would have a better word for it. Mind you, I've never found 'hurly-burly' very convincing, in quite a different context, out of the mouth of sadistic fisherman Grimes. Pears always made it sound like 'hurlah-burrlah'.

I beg isolation in a far away land as one excuse for being unfamiliar with your films David. As for Jasmine, I found it awkward and imbalanced - two films overlaid almost - one about Cate Blanchett giving a large oversized Tennesse Williams-esq performance and the other some Woody Allen derivative. Interesting maybe but very unsatisfying.

Calvary for me was at best an implausible reverse murder mystery and at worst a slight on the complexities and consequences of child abuse. Brendan Gleeson was good, the scenery was lovely but overly postcardy and increasingly silly portentous, the other performances crap, the climax vulgar, and the denouement unconvincing. That (all) said, the Irish tell me it is laced with black Irish humour which doubtless escaped me, much the same way I'm sure Oz flicks of the hyper stereotyping kind (say, Muriel's Wedding) spoke particularly to locals. But, emotionally, (spoiler alert) the dog stole the show.

Last night we watched Inside Llewyn Davis (Coen brothers) which was absolutely delicious.

Well, wanderer, you can watch the quirky little short - irritating or charming according to taste. And the minute of Cariatides is enough to whet the appetite.

Coen Brothers - now there's divided opinion, mostly my own between loving the early ones beginning with Blood Simple and hating both The Big Lebowski and some forgettable nonsense from which all I remember is someone on a roof.