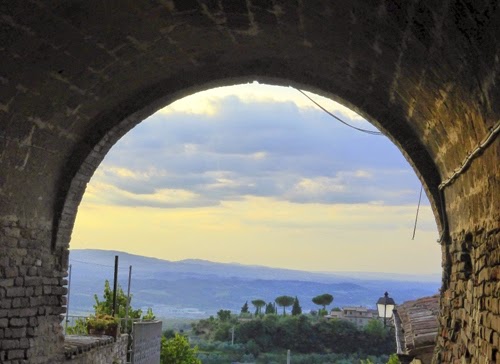 Among the many casualties of a chaotic two-day flying visit to the Incontri in Terra di Siena festival was quality time in one of the loveliest and most pleasant hill towns I've ever seen in Italy (and I've seen a lot now), Città della Pieve in Umbria, just over the 'border' from our base in Tuscany. Still, a glimpse was enough to whet the appetite. I blush to say I'd never heard the name, but quite apart from the fact that in a country less overwhelmed by treasures it would be a major destination for tourists - not so many come here - it also has the honour of being the place where Pietro Vannucci, detto il Perugino (1446-1523), was born and died (Peruginesque view over the Tuscan hills from the town above).

Our somewhat loose-limbed little band arrived early in the evening for a reception and a concert in the exquisite Teatro degli Avvaloranti, to be met where we parked by the local youth practising their drumming routines for an imminent festivity along the lines of Siena's Palio. Cicerona couldn't find reception venue; after much milling around outside the theatre, my touristic hunger took over and, gathering up the polymathic and equally keen Harry Eyres of Horatian and FT fame (read his Slow Lane take on the festival here), I decided to hunt out the Peruginos in the Duomo. Sniffing our way uphill did the trick within minutes. We came at it from the side street with the big Romanesque-Gothic bell tower before us, picturesquely counterpointed by one of the Renaissance palaces ahead in the main drag. 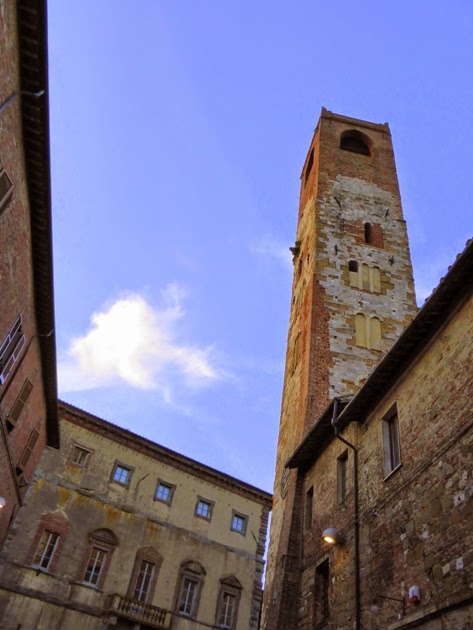 The bulk of the building on the site now was begun in 1600, when cathedral status was granted, with models including Rome's Gesù and Sala Clementina. So the two towers are in very different styles, though the mixture of brick and sandstone is typical of the town as a whole. 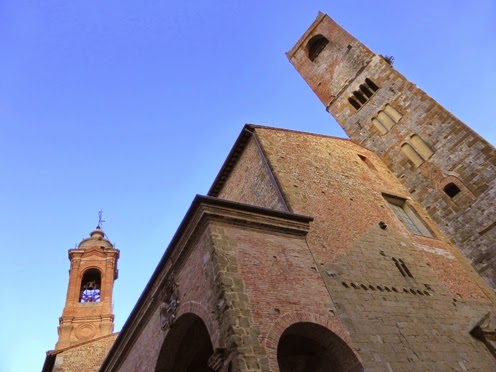 With no guidebook or leaflet anywhere in the church, and my Tuscany Blue Guide quite useless, of course, for Umbria, we had to make informed guesses about the Peruginos before moving towards the information plaques. Both paintings date from the 1510s. The altarpiece with its town flags glowing from a distance, and the rich colours suggesting recent restoration, seemed a likely candidate, though another painting on the apse's south wall seemed even more Peruginesque; it turned out to be by another imitator of Raphael. Harry proved sharper than me in hunches, rightly pointing out that the apse fresco, a rare survival from an earthquake, must be at least half a century later (it's by another local boy, Antonio Circignani). 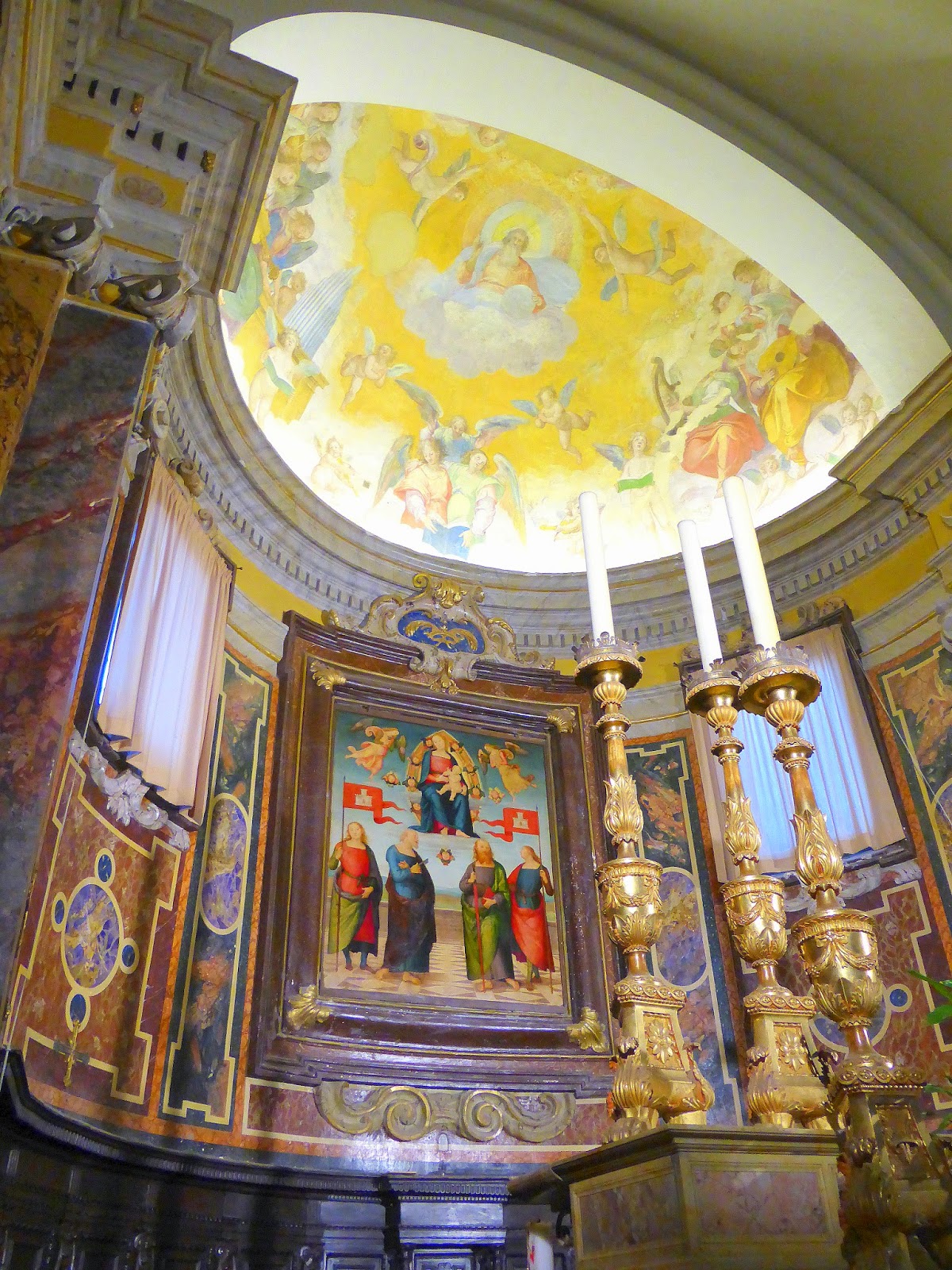 So it's the Virgin enthroned with Saints Gervasio and Protasio (the cathedral's own pair), Peter and Paul, which is Perugino's work 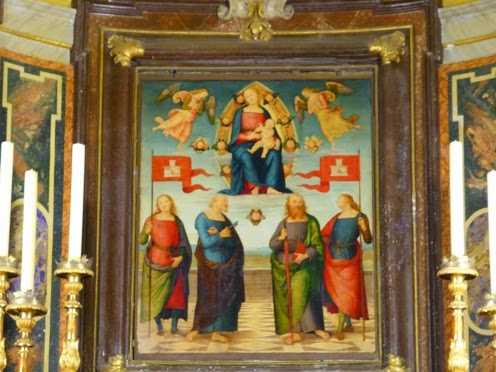 as is the Baptism of Christ in a chapel to the left near the entrance, with a copy of Perugino's self-portrait on the wall to the right. The original of that is now in Milan (featured in a Wiki shot way below). 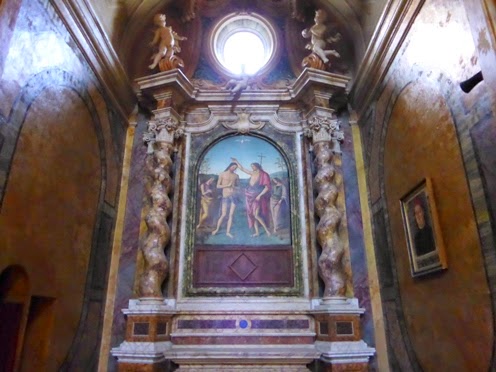 Perugino's Baptism took on a mysterious hue in what filtered through of the early evening light - seemed to me as fine as Perugino's several other versions of the scene. 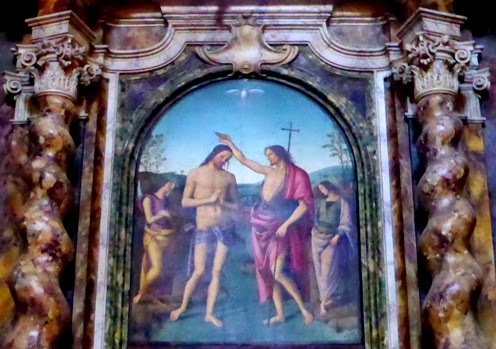 What do we know about the man? Vasari can't be trusted. Vannucci was born in Città della Pieve, not Perugia; his father was a wealthy man, and he grew up in anything but 'misery and want'. This much in Vasari is probably true:

He was apprenticed to a painter of Perugia, who, though he was not very good at his trade, held in great veneration art and the men who excelled in it. He did nothing but impress upon Pietro what an honour and advantage painting was to those who practised it well, relating the glory of ancient and modern painters, by which he kindled in Pietro the desire to become one of them. So he used to be always asking where men could prepare themselves for the trade best, and his master always answered in the same way, that it was in Florence more than anywhere else that men grew perfect in all the arts, especially painting.

For in that city men are spurred by three things: First there are many there ready to find fault, the air of the place making men independent in mind and not easily contented with mediocre works. Secondly, if a man wished to live there he must be industrious, for Florence, not having a large and fertile country, could not provide for the wants of those who dwelt there at little expense. And thirdly, there is the desire of glory and honour, which the air excites to a high degree in men of every profession, so that no man who has any spirit will consent to be only like others, much less be left behind. 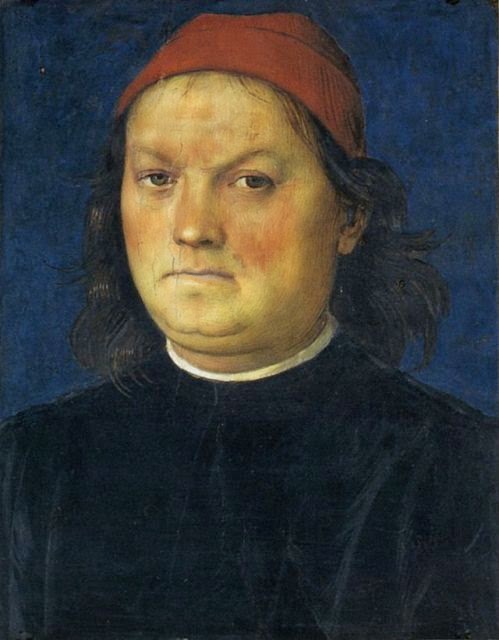 The biggest commission came in the 1480s to fresco the walls of the Sistine Chapel; only several scenes remain. The east wall was painted over by Michelangelo, of course, with his Last Judgment. That querulous genius called Perugino a 'bungler in art' (goffo nell' arte) - which he was not, but he did paint stereotypically in later years - so Perugino sued for defamation, and lost.  Later decades were spent in Perugia and Città della Pieve. 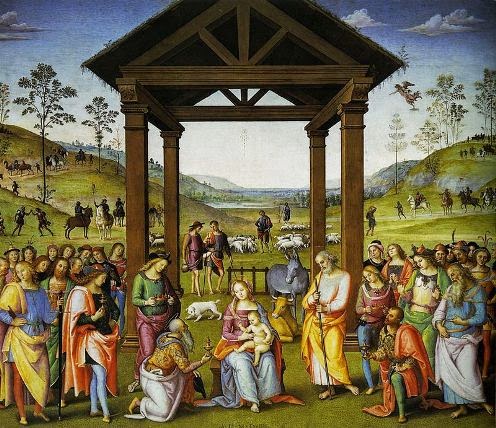 Perugino's real gem here is the Adoration of the Magi in the tiny Oratorio di Santa Maria dei Bianchi, worth picturing in another Wikimedia image but closed by the time we arrived; the ITS students had been taken there as part of their education, following a lecture by Maxim Vengerov's art-historian wife Olga Gringolts. Lucky them, but no matter: will return with J, possibly staying in town.

We did at least get the most moving concert possible in the wonderful civic theatre named after the local Accademia degli Avvaloranti (not a word I knew: it means 'corroborators', but in what apart from the arts I'm not sure). It seats 300 max, at a guess, though I'm terribly bad at estimating these things). Lingerers after the concert pictured below. 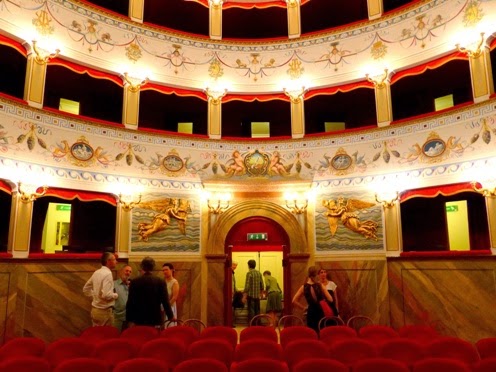 The handsome restoration of the 1834 neoclassical interior was begun in 2003; the exterior gives no hint of its splendours. If I understand correctly, the ceiling dates from 1870 and was restored even more recently. Perugino is somewhere up there, alongside Raphael. 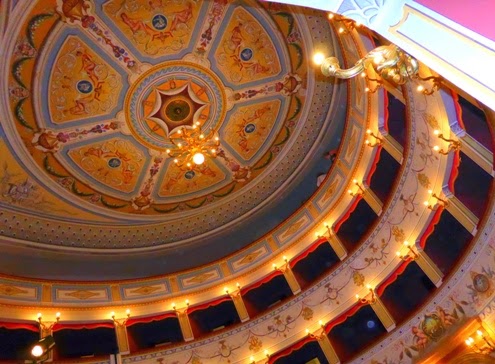 I know from our friends the Principesse Giulia and Stefania Pignatelli (good namedropping, huh?) in the Marche what a wealth of beautiful small theatres that region especially boasts, and the situation here seems similar. Not least in the failure of departments to meet: the restoration work is done by architectural organisations, but then the musical ones don't co-ordinate to fill the gems with worthy events (we heard a local band rehearsing in Ascoli Piceno, which is fine so long as that's not it, and it was). 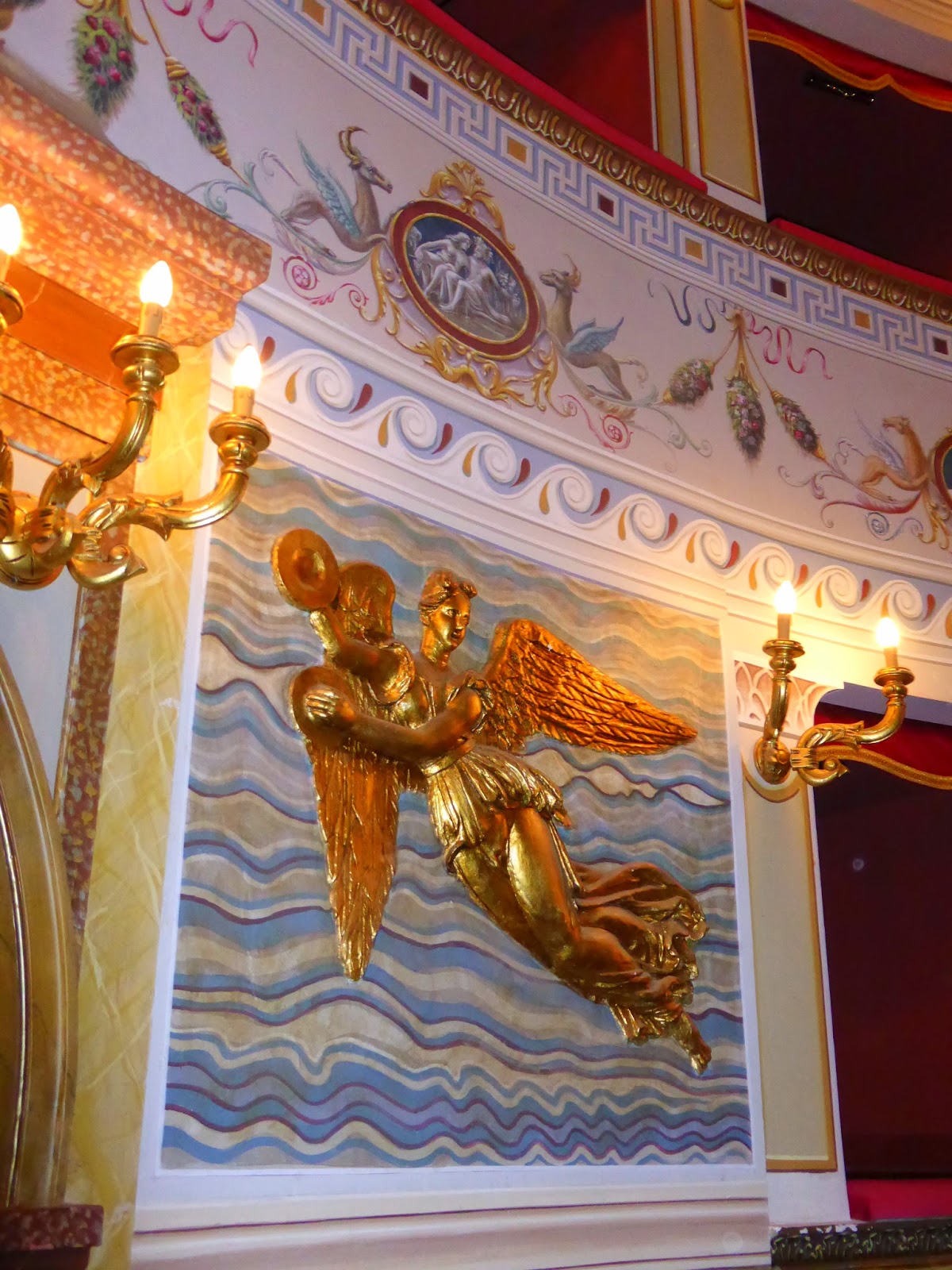 We got the ball rolling around Ascoli by contacting Martin Randall Travel to bring over Ian Page's splendid Classical Opera Company and attendant British audience, but the initiative needs to come from Italy. At least our treasurable La Foce musicians made sure there was something more than worthy of the place that magical night. A final shot, then, of the young musicians from Nazareth and Los Angeles in the square outside the theatre after the concert. On the left, cellist Yedidya Shaliv is shown his portrait in action by Larisa Pilinsky, vivacious artist wife of my very humorous Los Angelene colleague on the trip Laurence Vittes. 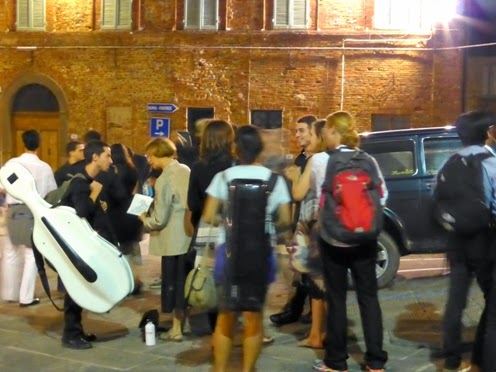 Perugino in The Adoration of the Magi shows such beauty, and that light which the Renaissance shone on the world, at a time when in Sorokin's terms ideas and sensuality were in idealistic balance. A tremendous confidence sprang up - "A man can do all things, if he but wills them" said Alberti. And Shakespeare -

" What a piece of work is a man! How noble in reason, how infinite in faculties, in form and moving how express and admirable. In motion how like an angel, in apprehension how like a god. The beauty of the world, the paragon of animals"

Yet they were all wrong. The Greeks were right and human life is influenced or even controlled by the dark forces of the Furies, in our own unconscious, and in the madness of crowds, as we see around us today

One forgets, too, that those were unquiet times in Tuscany. Perugino wasn't exactly a man of peace, featuring in a Florentine court case for assault and battery with staves of an unspecified personage. His friend was bent on murder. And then in the terrible year of 1554, 21 years after Perugino's death, Cosimo I de' Medici of Florence brought untold destruction to the Val di Chiana on his way to defeat Siena; whole villages were wiped out and never repopulated.

All this only took from January to August, nothing like the Syrian horrors which just go on and on, but much carnage happened in that time.

Such co-existence shows that both Shakespeare and the Greeks were right.

Wonderful; and playing havoc with my sketchy plans for next year.

On these matters, I'm with David D and the Greeks.

Farmhouses in La Foce are rentable and not, I think, exorbitant...you could do worse. And then perhaps on to the Lampedusa heirs in Palermo's Via Butera... I only take ten per cent commission for arrangements (smiley face).

The Greeks were right, of course, and Shakespeare often agreed with them. But it wasn't entirely dark (viz Furies into Eumenides). Just mostly - though there seems to be a divergence concerning the great lines in Homer about the jars of good and evil that Zeus dispenses to man. I remember being taught that two were of evil, one of good, which would seem more realistic than the more commonly accepted one good, one bad.

I can't at the moment to respond properly, but must at least say, albeit tongue I cheek. if Vasari isn't to be trusted, on whom can we rely? I love the thought of you racing off with a knowledgeable friend in search of Peruginos. I'm also touched by David D.'s comment and your response,

I'd certainly like Harry to be a knowledgeable NBF, Sue, but fact is I'd only just met him that evening, and he had to leave the next morning. But definitely my kind of person, and a bit sharper in his knowledge. It was such a good group, with the funny Los Angelenes as well as a very erudite and kindly German critic and his Romanian girlfriend.

I like these international gatherings, rather more inspiring than being stuck with fellow British critics (though of course some are good company, some are not).