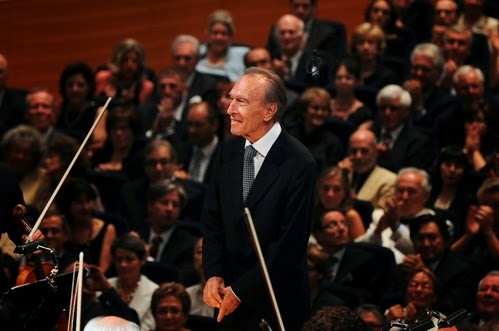 How could I forget? The greatest conductor of recent times died a year ago today, having given us a last decade with his Lucerne Festival Orchestra of the most extraordinary concerts I've ever experienced (Abbado in one of them pictured above by Peter Fischli). That his transcendentalism lives on is demonstrated to a remarkable degree in the Accentus Music film of the Lucerne memorial concert given on 6 April 2014. 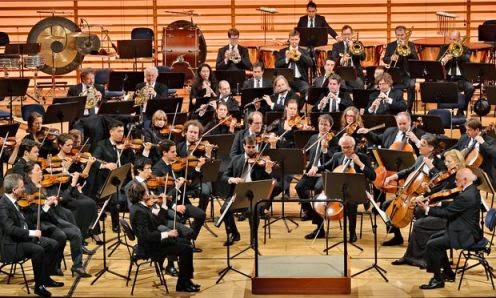 I was very honoured to write the notes on the strength of a Guardian obit, and in one respect I had an advantage with the test pressing which the viewer won't enjoy: to experience the openings of the Berg Violin Concerto and the Adagio from Mahler's Third Symphony without voices over.

Yes, they've done the crazy thing of approaching those two performances with footage from other memorial tributes. I was very moved indeed to see the packed crowd in front of Milan's Teatro alla Scala for the Beethoven 'Eroica' funeral march conducted in Abbado's honour by Barenboim - sorry, there's just no comparison between those two - where the doors were thrown open to the wider public. Can you imagine a similar show of popular feeling for any musician in the UK? Ditto the Bologna lying-in-state for which musicians played around the clock.

Unfortunately the finished product brings on the music while all this is being shown, a terrible mistake in my opinion - especially when the Mahler finale, even without the string note gliding into the silence following the fourth movement's angelic conversation, needs the magic of its starting point. 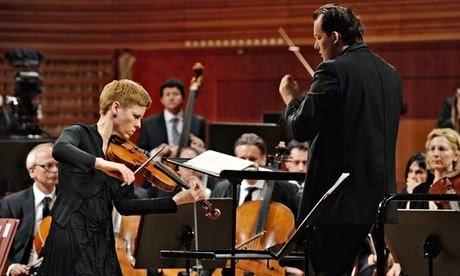 What's invaluable in the DVD is to have the words of the wonderful Isabelle Faust, soloist in the Berg, and of veteran viola-player Wolfram Christ, testifying to Abbado's abiding presence in the orchestra, both as invisible guide while they play the first movement of Schubert's 'Unfinished' Symphony without a replacement and in the hearts and minds of the musicians. 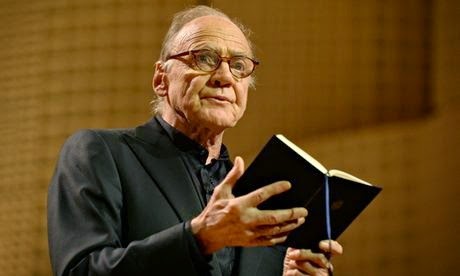 The musicality of Hölderlin's verses for 'Brot und Wein' as read by Bruno Ganz is spellbinding - in the booklet note I've written about my own assumptions of the connection between the lines and Abbado's spirit - and here, too, is Andris Nelsons as one of a number of younger-generation spirits who may rise to Abbado's level. Indeed, the Mahler finale has a special intensity in its perfect pacing I've only heard twice before - from Abbado himself with the Berlin Philharmonic and from Jiří Bělohlávek with the BBC Symphony.

Boy, did we need it the evening we settled down in front of the telly. I urged it on J because we'd just watched a remarkably horrible film, Calvary. 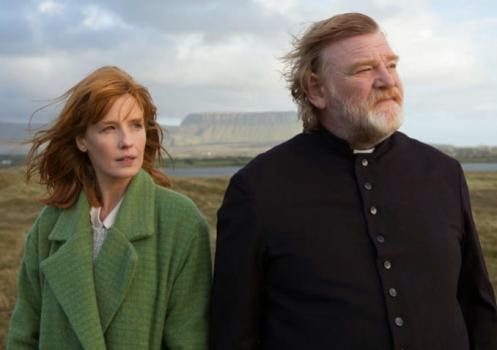 The acting, led by Brendan Gleeson (pictured above with Kerry Reilly as the priest's daughter), is perfect, the cinematography very beautiful, but 20 minutes into the mannered script (which begins with the line spoken by a parishioner in confession to the priest 'I first tasted semen at seven years old'), I began to have the horrible sensation I'd been here before. Namely in the ugly thriller In Bruges, similarly unredeemed for me in that case by the lovely Colin Farrell. Sure enough, the director and writer of Calvary, John Michael McDonagh, is the brother of the screenplay author for In Bruges, Martin McDonagh. These siblings had a very strange upbringing, which may account for the negativity of their Weltanschaaung.

Such grotesquerie might work on stage - I've not seen The Pillowman - but it's at odds with cinematic naturalism. And when you have such visual beauty from the scenes along the Sligo coast, with - I'm assuming - Yeats's Ben Bulben in the distance, how come there's no spirituality at all in the film, not a single human mixture of good and bad in the whole community? Which was why I thought we needed a spiritual dimension to wash away the nasty taste left by Calvary. And we got it, in tearful infinity, from the memorial concert. 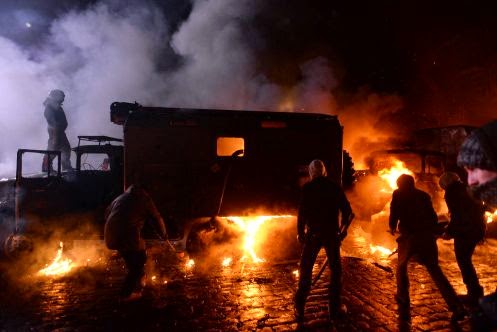 Meanwhile, the horrors of this temporal world are never far away. Also on 20 January 2014,  street fighting in the Kiev protests was reported to have escalated. And where are we now? Still being haunted by even more horrific scenes of destruction around Donetsk airport as Russian-armed insurgents and possibly Russian forces fight on in breach of the ceasefire which, it seems, Ukraine has tried to honour. News continues to trickle in of Russian soldiers sent on 'secret' missions to Eastern Ukraine and killed in the conflict: the mother of one 20 year old has been brave enough to speak out. So Putin will continue to lie - and Hollande says he has no reason to disbelieve him?

I've read only one eye-witness account in detail - the brilliant Ukrainian Russian novelist Andrey Kurkov's Ukraine Diaries, which run from 21 November 2013 to 24 April 2014. Much of what you need to know about the complexities of the conflict is here, in startling proximity to the unfolding events. 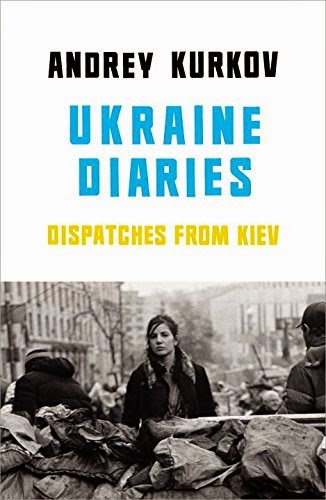 Here's part of just one pertinent entry, from 20 February 2014. Kurkov is telling us how the then opposition leaders and radical nationalists like Pravy Sektor jumped on the spontaneously launched bandwagon. The complete paragraph seems to me like a paradigm of most revolutions.

...recently, the only way to distinguish a radical from a peaceful protestor is to see whether or not they [sic - put it down to slack translation] have a Molotov cocktail in their hand.

The protestors have already been through all the stages: from the romantic phase, where everyone thought they could achieve their aims within a few days, to a premoniition of war, with revolutionaries covering their faces with balaclavas, wielding baseball bats and  metal riot shields stolen from the police. Now we have entered a new phase, which can be summarised in five words: 'The bridges have been burned!' And many protestors on the barricades in Hrushevkoho street have removed their masks, no longer afraid to show their faces.
Posted by David at 13:05

Thanks, David, for drawing my attention to the Kurkov book, which I had somehow missed. I 'enjoy' his novels very much, so look forward to reading his account of the conflict.

Indeed, Catriona - 'Death and the Penguin' is a little gem. The style here is relatively ordinary, as befits honest reporting. He also comes across so well on the radio, pleading his special case as a Russian born in the Ukraine who loves his country.

Whatever conclusions the various antiPutin people might arrive at and hold - and a pro-Ukrainian stance seems the right one - remember that all their observations and reports are made from a parti pris position, devoted to arguing for their conclusion. Hence, however honest, they see the world in the light of their stance. One has to read their arguments at a distance. Maybe one fault by the West is not to approach the various problems in this detached way, which is often a better way of attaining the desired result.

Point taken. I value the personal view, especially from one as eloquent as Kurkov, but I realise it's partial. Even my favourite site, The Interpreter, is funded by the son of Mikhail Khodorkovsky, and I always bear that in mind. The chapter and verse are always very, very diligent, though.

Will anyone mind if I linger on thoughts of Abbado? I've been watching the video recording of the Abbado/Lucerne performance of Mahler's 4th, not realizing it's already one year on, but just so very grateful we have this record of his work, all the more so as I never had the opportunity to see and hear him (or them) in live performance. The music radiates from within him in a very particular way, and the affection he and the musicians hold for one another is palpable.

Of course not, Sue: I was hoping someone would. In a way his approach to these works of genius will remain bigger than any of the terrors we're fixated on at the moment.

My favourite Mahler Fourth of all: his first recording with the Vienna Philharmonic and Frederica von Stade. The Gustav Mahler Youth Orchestra DVD performance is good throughout, with the lovely Juliane Banse in the finale: here I have to stop before Kozena turns up...

At the risk of lowering the intellectual level of the conversation, I will venture on two anecdotes about conductors

In 1945 at the time of the Japanese surrender we were as usual glued to the radio, and it was announced that there would be a special concert conducted by someone famous. Why, I asked my mother, do they need a conductor? I had been playing the piano for several years and it seemed to me that all the musicians had to do was to start together and then follow the music before them. Well, replied my mother ( not an especially musical person though a great fan of church music) they have to know when to play loudly and when softly. Not a bad reply to an 8 year old

When living in Cambridge I remember an amateur musician who played up to quite a high level in a local orchestra - concerts in King's etc. She said to me one day that she had experienced a revelation. She was used to the local ( well known ) conductor, and then for a certain performance one of the great names came to Cambridge to conduct. She reported that it was a wonderful shock and that there was no comparison with the local guy.

Conductors aren't so much needed for loud and soft but for the special atmospheres therein: Abbado and Mravinsky were masters of the intense pianissimo, Rattle's sometimes don't work.

One of my students on Monday found comparison between conductors in a kind of mini-Building a Library on the Meistersinger Prelude very instructive. She said she hadn't really appreciated how much they shaped a performance before.

People also forget that it's not so much what the conductor does on the night - though that extra frisson is granted to a few - as how well he/she prepares in rehearsal. I admire all the hard workers, especially Jurowski, Ticciati and Mark Wigglesworth.

I am in agreement with you about Calvary. Everybody was awful and bad. These Catholic communities are completely held together by kindly elderly women, yet there was not a one. All 3 women in the film were babes of one sort. OK the widow was "Good" but more or less useless. If there had been just one spiritually enlightened ie loving older woman who showed compassion to poor old Gleeson, it would have bound the film together as a work of art and as something a bit more realist. But it wasn't that film, I concede.

Yes, Daisy, there has to be a middle way between the sweet old ahooaha Oirish community and the psychoville of this film, doesn't there?. Though I gather that's par for the course with the McDonaghs.

I can take any amount of disturbance in a film so long as the characters are recognisably human, with all the mixture of good and bad that entails.

Well I learned a new word Weltanschaaung. I just love the way you throw it in the sentence. Something I see a lot in English but never in French.

Pretentious, moi? I suppose I could have just used 'outlook' or 'perspective' but with German poetry still resounding, it was too tempting.