The good person(s) of West Hampstead 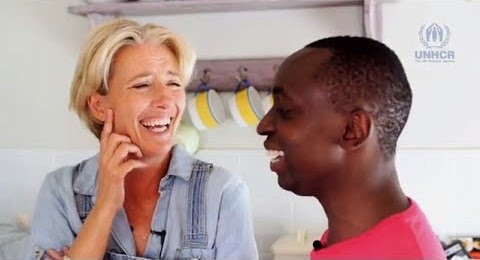 I was going to call this post 'a heroine of our times', parallel to the 'hero', Desmond Tutu, then I thought Emma Thompson would scoff at the grandiosity of that. After all, in one way, the good she does is a drop in the ocean, whereas Tutu's influence is infinite. Yet I hold to the Talmudic 'he [ie anyone] who saves one life saves the world', and the below film (in two parts) of Em and her adopted son Tindy(ebwa) Agaba lifted my spirits in the dark days following the Paris massacre. I sent the link to selected friends, but want to share it with the (little) world.

Greenpeace led me to it, via a 'what did we do in 2014?' film - answer, much good - which led me to a clip of ET cooking on board the Rainbow Warrior and alongside it other recommendations. She's funny, sophisticated, self-deprecating, an impassioned speaker for her several causes and a great mixer-in. Few top Hollywood actresses seem so natural (well, there's always Meryl, I suppose). Her mannerisms also remind me of my dear late friend Nell Martin, who should have been a leading actress, so that's a reason why I often find myself on the brink of tears when I see her. Plus, of course, in addition to Tindy she has SUCH a handsome husband - the actor Greg Wise, whom she met on the set of Sense and Sensibility while rebounding from a deep depression following the end of her marriage to Kenneth Branagh - as well as a daughter and clearly values private life and normality.

Hope I have permission to use this media shot of Tindy's graduation. He is now a human rights lawyer. When he arrived in London as a refugee and spent six nights on the streets, he could hardly speak any English. I'll leave other circumstances to the film. 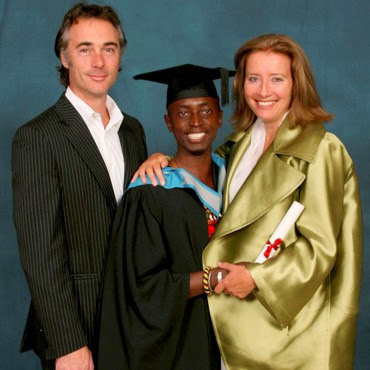 Actually I'm not sure what 'normal' meant to Em and sister Sophie (now an equally individual actress) as they grew up, what with dad Eric writing and voicing brand-new scripts for the French animated series Le Manège enchanté as The Magic Roundabout, laid-back winner of so many childhoods including mine, and mum Phyllida Law being both an actress and the model for the musings of TMR's glorious cow Ermintrude. Out-of-focus realness was the best I could do here. 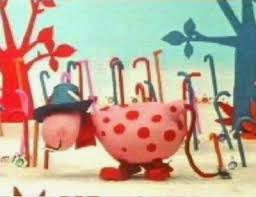 Anyway, let the mutually adoring mother and son tell their story as filmed at the instigation of the United Nations High Commissioner for Refugees.


Near the end of the second part, Em makes us think about the obvious: we all have refugees in our family some time back. Heck, on my mother's side - which is the only one I know about - the first ancestor on the Parris family tree is Jean de Paris, who fled here from the St Bartholomew's Day massacres in Paris. So it goes.

Book now for ET's Mrs Lovett opposite Bryn Terfel at the ENO. I was giving Sondheim's Sweeney Todd a rest, much as I know it to be a masterpiece, but I have to make an exception here. And this gives me the cue to hymn another favourite actresses as my 'Best Actress of 2014' (with Belvoir Sydney's The Wild Duck and Phyllida Lloyd's women's prison Henry IV - scroll down this blog entry - as the top theatre productions): Juliet Stevenson in the Hamlet of women's roles, Winnie in Beckett's Happy Days. Photo by Johan Persson for the Young Vic. 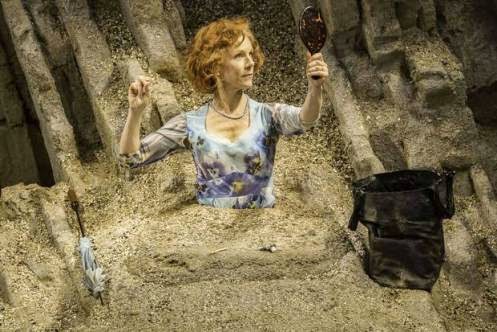 Good news: if you didn't catch it then, she returns to the role at the Young Vic in February. I think the performance is rich enough to see at least twice, so I'll be back.

Come to think of it, that would be a great role for Em too. Not to mention Harriet and Lindsay, who were in the audience the night I went. How I wish I'd seen the Winnie of the great Billie Whitelaw, who died last year and who remains in my pantheon of drama goddesses I've seen on stage for her Andromache in John Barton's RSC The Greeks (so mesmerising that I went twice). Awards all round, then: cue a final clip of Em in 1996 reading what she thought would have been Jane Austen's acceptance speech on being awarded a Golden Globe for the screenplay of Ang Lee's superlative Sense and Sensibility.

David: This post is such a welcome tonic in so many respects. It's wonderful to be reminded of Emma Thompson's decency and wit (I'd not seen that acceptance speech before, and what a charmer it is). The Talmudic saying is exactly right, and not only does she exemplify this, but also Tindy Agaba. How fine, in that regard, that he has chosen to become a human rights lawyer. Much to celebrate here, and for each of us to emulate.

Wonderful that it's worked out so well. I wish two dear friends of ours had had as much luck with the two children they adopted. Early years with a drug-addicted mother seemed to have already seeded their havoc, and sadly both boys have been in and out of institutions (by which I mean borstals, for the parents would still have them at home) in their teens. I'd have to say it ruined their lives, though I can't say what their own feelings are about having gone through with it.

Yes, I know what you mean--I have acquaintances who've experienced similar problems, tragic on many levels. So it's something about which to rejoice, as you have here, when good yields good.