Hearing Mirga from a Bodrum hospital 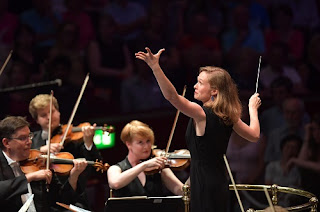 I was meant to be at Mirga Gražinytė-Tyla's first Prom with 'her' City of Birmingham Symphony Orchestra last night (images, which reached me swiftly as usual, by Chris Christodoulou for the BBC). Should have flown back from Bodrum on Friday after three blissful days at the D-Marin Classical Music Festival in Turgutreis, featuring great Turks like Fazil Say and newcomers I'd heard and loved in Istanbul alongside the likes of Gautier Capuçon and the Tonhalle Orchestra Zurich under phenomenal Lionel Bringuier; Arts Desk report anon. But at around 3am I felt terrible pains in the left side of my abdomen. As I was vomiting regularly, I thought it was food poisoning. But the lovely Cansu who'd been looking after me called the paramedics around lunchtime and I was rushed here to the private (ouch!) Acibadem Hospital in Bodrum.

Turned out I had a kidney stone trapped in the passage from the left kidney to the bladder, which had made the kidney dangerously infected; septicemia could have set in soon had it not been caught (praise be to agony!) Odd that, apart from the odd occasion of dark pee, I'd had no notion of this before the pain kicked in. So in I went yesterday for a quick op where they broke up the stone by endoscopy, and here I am now hoping to be discharged this morning and, inshallah, fly home later. The festival people and Jasper Parrott, who invited me to Turgutreis in the first place, have looked after me well; I'm very grateful to them. 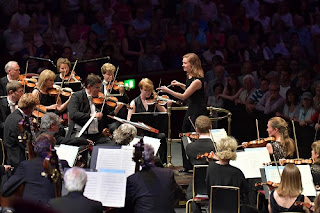 In the meantime I was able to hear a couple of Proms on the laptop, starting with most of Iván Fischer's Budapest Festival Orchestra Mozart programme - lovely, limpid sounds in the Clarinet Concerto, spreading balm in this room, but I was too tired to hear all the Requiem through. And what of Mirga, whose first concert with the CBSO The Arts Desk's man in Birmingham, Richard Bratby, was among the few to cover? Difficult to judge from a quietish relay, but her Magic Flute Overture was full of well-articulated life. Hans Abrahamsen's let me tell you should perhaps have been experienced live - as several folk have just confirmed - but I got the impression that both he and Barbara Hannigan (pictured with Mirga below), for all her stratospheric skills, were on this occasion rather fey one-trick ponies (see how telegraphic I can afford to be when I'm not officially reviewing). The discreet tinklings like icicles forming in the vast Albertine colosseum were lovely for a bit, but I wanted more. I fear the dreaded compound word 'sound-world' may crop up a lot in reviews. Again, my feeling is that there have to be 'hooks' as well as 'process'. 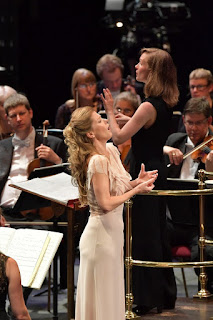 As for the Tchaikovsky Fourth, Mirga clearly has the technique to do what she pleases - and did, with some strikingly accelerated crescendos in the first movement's second waltz and development. The second-movement song, though, didn't feel natural, and inorganic tempo changes elsewhere reminded me a bit of Dudamel (not for nothing was Mirga in Los Angeles). The encore, which should have been more correctly identified as the Diamond Fairy's Variation and Coda from Act 3 of The Sleeping Beauty, scintillated; could we hope for the complete ballet from Mirga to outdo Petrenko's glorious Act 3 in Liverpool? I hope so. One thing's for sure: she's a live wire, and will have plenty of time to settle. In the meantime, I look forward to the TAD report of Alexandra Coghlan, who covered the concert in my stead. Later (at Istanbul Airport now for the second leg of the journey home): and here it is. Clearly you had to be there.

29/08 Anyway, I'm back home now after a not too exhausting two-leg journey. Praise be again to the festival folk for fixing me up another flight so quickly. 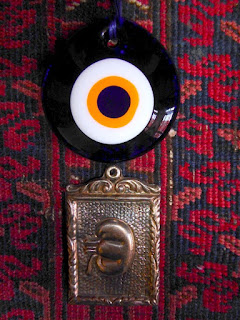 They also gave me the present of a nazar, an amulet to guard against the evil eye - I've seen it hanging on the doors of hospital rooms in photos. Here it is at home, and below it the ex-voto of a kidney which J was holding up, half-jovially but I suspect with just a bit of that Catholic superstition in his heart, as I came out into Heathrow Terminal 2 Arrivals late on Sunday night.
Posted by David at 06:59

So glad you are on the mend, and am immensely impressed that you had time and the energy both to listen AND write in the circumstances! The Abrahamsson is a piece i'd definitely like to hear again- and in a smaller venue... it was full of subtleties, touches and colours that I imagine would be very hard to detect on small speakers- such as very soft percussion effects and the bass drum skin literally being rubbed circularly. On one hearing I probably couldn't immediately grasp the arch of the three parts, but there was so much about it I'd like to hear again, and see how it develops through familiarity.

One thing which stands out above all though - what an AMAZING orchestra the CBSO is!! There seemed to be nothing they couldn't do absolutely flawlessly. And what a luxurious, rich and flexible string section for the Tchaikovsky- something to dream of!

Keep getting better, and have a good return journey.
Toby

Thanks, Toby - here I am killing time in Istanbul Airport (that was a chore, going through all the customs and bagcheck stuff again - though I'm not TOO feeble). Interesting that another distinguished voice said he thought the Albert Hall was just the place for all that crystallisation and discreet tintinnabulation. Of course the background in the hospital was not exactly silent so I strained for some of the subtleties.

Agreed, the strings sounded glorious even on the broadcast. And the Sleeping Beauty encore was a little miracle.

Hope that by now you're safely home, and that you'll get well quickly.
And I'm really glad that you got to hear Mirga's encore- I knew you'd love it!

I am, Paul, and many thanks.

Ouch! So glad you are OK--and glad to see you have the nazar amulet to keep away evil spirits, coupled with that kidney ex voto(!). I am amazed at how much you were able to take in and assess while listening from your laptop. I seem to recall that, on first listen, I wasn't taken with let me tell you, but that it grew on me quite a bit on a second and third listen (on the digital concert hall, so video as well as audio). I don't suspect you'll have the same response, which is of course just fine. I do like, as a general tenet, your idea that there should be "hooks" as well as "process." Though of course some music is intentionally only the latter, I tend on the whole to prefer works that have both. A big exception for me might be John Luther Adams's Become Ocean, which has proved to be "just the right listening" for me from time to time.

Glad you glided in late enough to catch the afterthought photo, Sue. Yes, sometimes pure 'process' pieces can be welcome, though I found myself frustrated by JLA's horn piece at the East Neuk Festival - I wanted it to 'become', like the Rheingold Prelude on which it was so obviously modelled. But you're right, horses for courses. Arvo Part at his very simplest works for me.

And thanks for your concern. I've had so many sympathetic emails from friends - though many of them seem to think it's about the pain of passing a kidney stone (commonly described as 'worse than giving birth'). Mine, of course, never got to the sea but was exploded in outer space, as it were. Anyway, I'm a bit weedy and weird at the moment, but the body is good at telling one to rest when necessary. At least I made a Prom last night but I'll give myself three days' grace before the next one.

Glad to hear you're back up and running - Spied you from my arena perch at Rattle Mahler 7. Hope all is well.

Thanks, Andrew - not sure why this is such a belated reply. Presume you enjoyed the Rattle Mahler? One of the best things I've heard him do, with the Berlin Phil, at any rate.