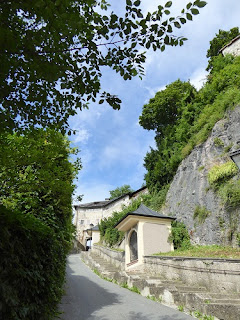 Unlike my walk along the 'Julie-Andrews-Allee', this Salzburg jaunt wasn't serendipitous, but I did it the wrong way round, widdershins, as it were, unintentionally avoiding at first the Stations of the Cross. The great writer, and very much my current god in the reading stakes - from a biography by George Prochnik alongside Zweig's own studies of Marie Antoinette and Erasmus to his takes on Montaigne and now Mary Queen of Scots - bought an eyrie on the romantically-titled Kapuzinerberg in what, shortly after the First World War, was quiet, unfestivalled Salzburg. He chose the city for both for its calm and its position as 'the right springboard to [the rest of] Europe'. I'll let the author of The World of Yesterday paint the picture:

The little wooded hill on which I lived was the dying wave, so to speak, of the mighty mountain chain; inaccessible to automobiles [that only pertains up to a point now, though I saw no vehicles and only two other people on my way down] 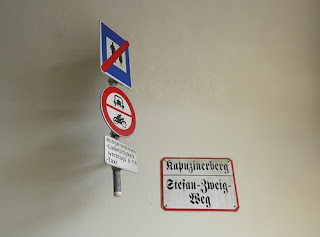 and attainable only by a hundred or more stairs up a way of the Cross that was over three centuries old; the effort was rewarded by an enchanting view over the roofs and gables of the many-steepled city. Indulge me here: the light was good, so I give you three. 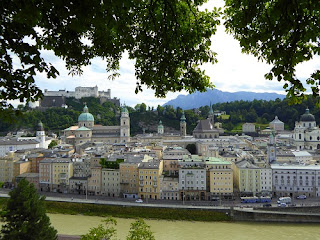 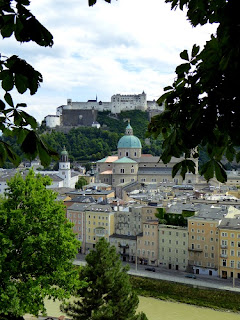 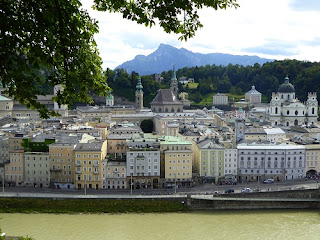 Zweig has to point out that the view in the other direction was towards the Alpine chain and - horrid irony - the Salzberg at Berchtesgaden where his oppressor, unknown at the time of purchase, would make his home. The fact that the 17th century Archbishop's lodge was in a ruinous state and well-nigh uninhabitable didn't put him off; nor did the cold in a time of post-war famine and need. It seems typical of Zweig's aristocratic remoteness that he only really got in touch with that on his few excursions a week into town.

The house is now screened on all sides by trees 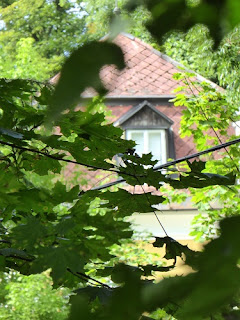 and, sad to say, some dramatic barbed wire, but you can take the 'Weg' up behind the house into the woods. Had I had longer before returning to the hotel after a fine lunch in the Stiftskeller Skt Peter ('Europe's oldest restaurant'), I should have walked further to see the Alpine range end of things, but I went only so far, 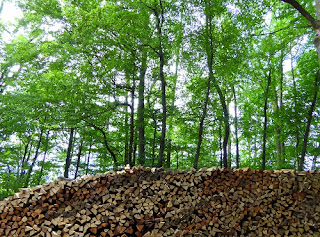 having made the ascent via an obscure alley so that I hit the big view first and the church after. 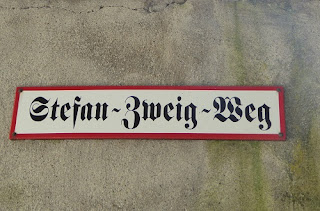 There, at any rate, was a bust and wall plaque opposite the hidden house 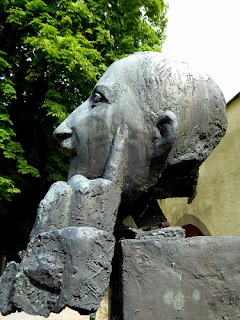 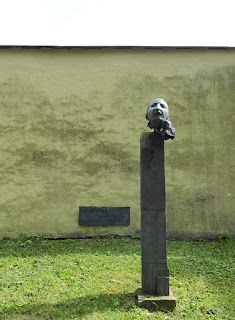 after which I went down past the garden gate 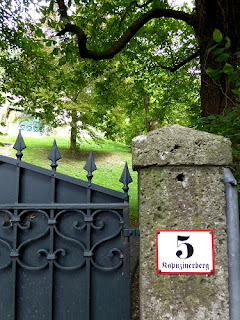 and saw in reverse the Stations of the Cross. 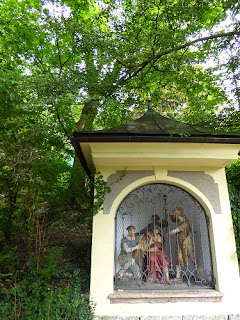 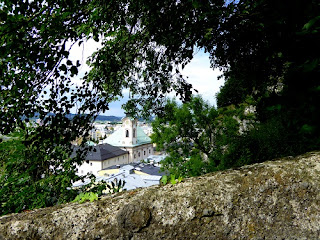 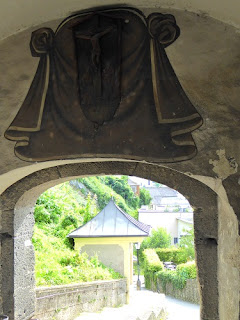 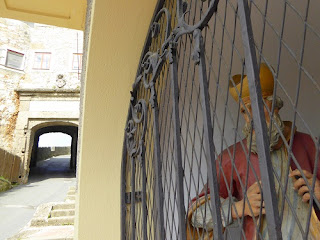 A speedy walk towards the tram stop took me via the magical Steingasse which snakes between the Kapuzinerberg and the river, a mixture of the plush and established 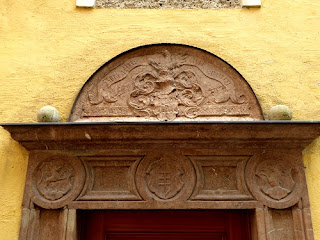 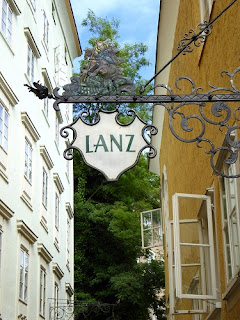 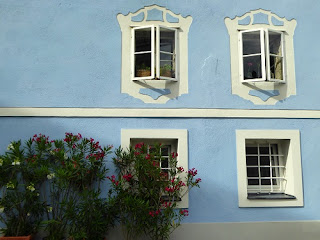 with touches of Bohemianism. 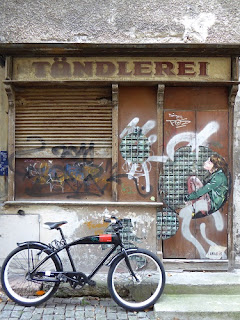 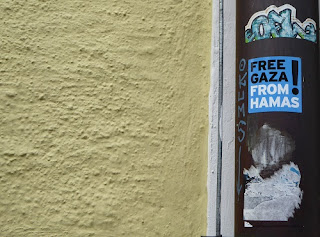 At least Salzburg has a university, which saves it from ossification. Meanwhile, over at the Haus für Mozart where I saw the intriguing second performance of Adès's The Exterminating Angel, Zweig's bust 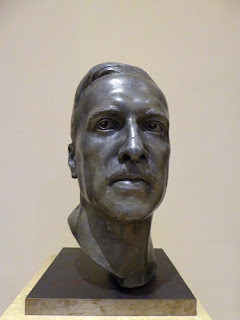 and Max Reinhardt's flank the entrance to one of the most opulent theatre bars in the world. 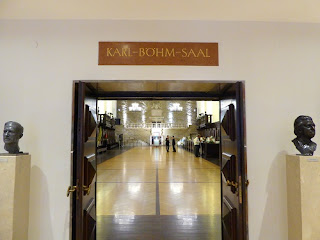 I was going on to write about Zweig's Montaigne, but work is pressing and the great French man of letters will have to join proud Mary Stuart when I've finished reading about her ill-starred path to the scaffold.
Posted by David at 17:20

Mary Stuart may have been proud but she was quite hopeless as head of government and as a moral person. All the Stuarts were the same, and one can only be thankful that Katherine of Braganza was sterile. Although I suppose one can say that there was a good result of their foolishness, in that it provoked the Glorious Revolution, and set the country on the path to democracy

Knew her, did you? So far nothing in Zweig to suggest she was immoral. Anyway, that is SUCH a footnote. We can wrangle about her when I've finished the book.

I did not mean that she was sexually immoral. I used the word in its broader sense of her qualities of character

Still questionable - probably no more so than tricksy QE1. And I wonder if the same label would have been applied to a man. Even Zweig shows traces of his time's casual sexism. Anyway, he's the subject for now, not Mary.

I apply the same judgement to all the Stuarts, male or female, from Mary to the Young Pretender. They all lacked judgement which QEI had in ample supply. I will be interested to hear what Zweig concludes.

A lot of memories here, I missed not going to Salzburg this year for the Festival or just a vacation, a charming city. We never did go up the alley to see Stefan Zweig's house. I am not surprised it is shielded now from view, to many tourists.

Not that many on the Kapuzinerberg, Laurent, and they only come up for the 'belvedere' and go back. I saw only a jogger and two other people on my circuit of the 'Weg'.

Zwieg was a fascinating man, wasn't he? I'm so glad you walked us down his Weg, at least virtually. While even at my best, I couldn't begin to match your pace, I must get back to reading more books and a lot less news.

I think I may have written about this before, but it amazes me how very topical Zweig remains re the threat to our own precariously united Europe, and on dangerous demagogues... But the Trump/Clinton saga is something you couldn't make up; how many plays and books will be written about it? I see our own mini-Trump-with-half-a-brain Boris is already the subject of Edinburgh Fringe shows.

Indeed you couldn't make this stuff up, and indeed, it gets ever more surreal, for Farage has just joined Trump to campaign in Mississippi: here's the link.

Every day some new absurdity - we've gone past the point of being surprised, but that's a corker. All we need is George Galloway in the mix (if you haven't heard of him over there, so much the better).