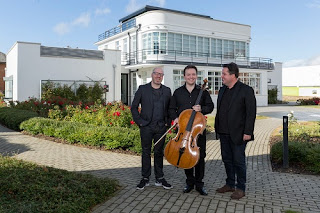 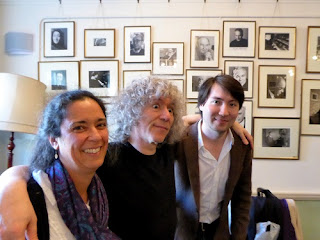 Steven Isserlis (pictured pulling a Harpo face, if not quite a 'gookie', in the second picture above with my friend the wonderful pianist Sophia Rahman, who knows him well from Prussia Cove, and Kazakh cellist Bulat Tynybekov) and Olli Mustonen may be the better-known names, and their Wigmore lunchtime programme of Schumann and Prokofiev much more familiar, but Richard Harwood in his solo recital on the last day of the Music@Malling Festival had equal ingenuity in his concert planning and no less soul in his playing.

He's pictured up top with the indefatigable driving force of Music@Malling, violinist and conductor Thomas Kemp, on the right and a film composer they both know well from session work, Frank Ilfman, outside the converted 1942, Deco-inspired Control Tower of what was once an important airfield for bomber pilots in World War Two and is now Milton Keynesesque Kings Hill. The development is ambitiously managed by the American property trust Liberty, under the aegis of which Martin Apps took all the performer photos here and which also looks after the art gallery in the converted building where the recital took place. 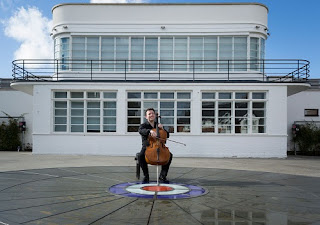 Attempts to get to other events of music@malling were foiled by Chelsea and Westminster Hospital messing me about midweek regarding preliminaries to my stent removal post-hospitalisation (it's happening now early on Thursday morning). So getting to hear Bach in the chapel of the marvellous West Malling Abbey will have to wait until last year. But this belated expedition was totally worth it. Failing a talk on Peter and the Wolf (too many unruly schoolkids), Tom had asked me to compere the recital, but I felt I didn't know enough about the music and didn't have enough time to mug up. So I got to enjoy it as a spectator instead. 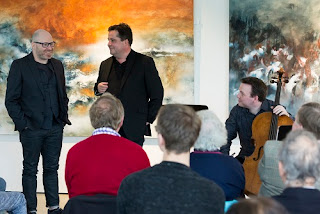 Richard has already recorded some of the pieces he included in his programme for Resonus, Composing Without the Picture: Concert Works by Film Composers. Some were in existence already, but he also had the ambition to commission new works, working as he does with many contemporary figures in the business. Personably introducing the ones in the recital, he pointed out the interest and challenge in getting musicians used to working with sound decks and/or big orchestras to focus their creativity on one instrument for a 'serious' concert context. Frank Ilfman was there to prove the point, talking about his Walking in a sea of sands with Tom (pictured above) before Richard gave the premiere. Circling high from a low point featured in several other works, chiefly the first of Ennio Morricone's Riflessi (1989-90). Interesting technique here: Morricone writes out all the notes without stems or anything else to indicate the length - that's up to the player. Richard held up the score to show us. 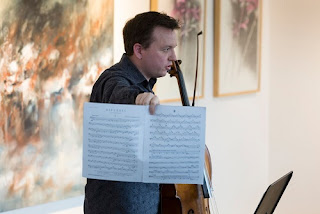 For me, the absolute highlights of a never less than engrossing sequence came at the beginning and end. Having only just got to grips with Ernst Toch's Speaking Music of 1930 in the uncannily flexible throats of the Theatre of Voices at this year's East Neuk Festival, I found the three-movement Impromptu from the end of his creative life (1963) a revelatory contrast. The first movement is airily diatonic, like late Prokofiev, the second pure scherzoid entertainment, the third deeply personal and troubling. It's marked Adagio, con espressione - quasi der Letzte Kampf. Toch's own 'last struggle' was with cancer - he died not long after completing Impromptu - and the war between serenity and sheer pain is well expressed here. 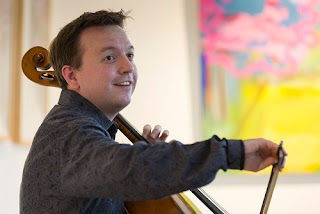 In a kind of ring composition, Harwood played another diverse three-movement work by way of finale: John Williams' pieces reflecting on the Afro-American experience. In 'Rosewood' there's the crack of the whip and -according to Williams' enticing note reproduced in the recording notes - 'the sound of the old steel-fronted guitar played by some of the early workers as they tried to ease the pain of their long hours in the field'; 'Pickin'' embraces with taxing virtuoso writing for the cellist the 'side-slap' and 'shoe-slap' dances; while the slow, inward finale reflects the lullaby of Rita Dove's poem 'The Long Way North' - an eloquent way to end. I'm going to download the tracks of the recording, and I hope you might do the same.

By the time we came out of the recital, the morning rains had cleared and the sun was shining on the Control Tower and the arc of rosebeds around it. 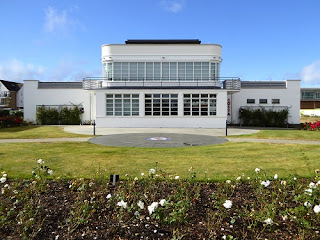 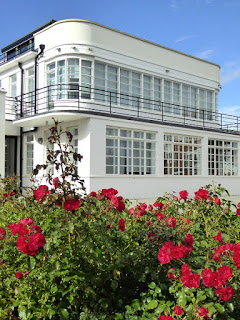 Strange to find this contemporary way of housing thousands in deepest Kent just down the road from West Malling itself, which still feels like a pure country town, meeting the fields and woods at various points. We had a very good lunch in The Swan before abandoning the plan to walk the Pilgrims' Way - the erratic pain which can still dog me from the stent manifested itself at just the wrong time - and strolling gently around town instead. 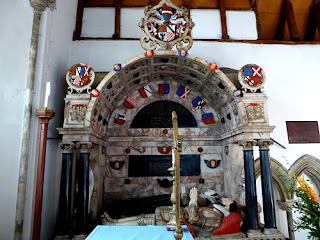 It was good to see the church in daylight, and especially the glory in the chancel which I hadn't been able to note at last year's music@malling evening event - the Brett monument, of alabaster with black Ionic columns and a rather striking shrouded skeleton 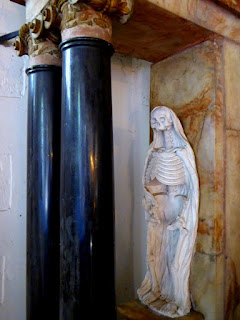 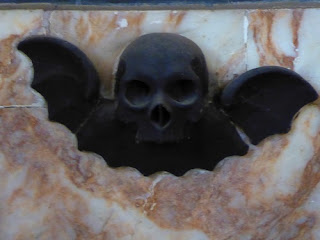 and (also creepy) a kneeling child behind their heads. 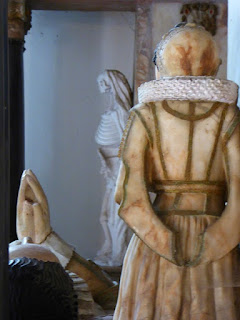 The repainting is gaudy but presumably not unfaithful 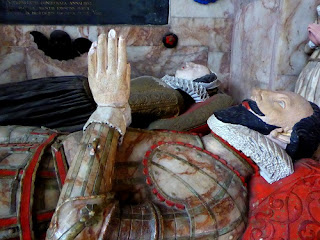 and there's a fine sedilia to the right. 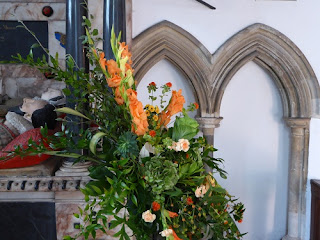 I couldn't find out much about the arms in the glass of one of the chancel's north windows - update: Tom tells me they belong to the Douce family who lived in a big house close by - but I like it anyway. 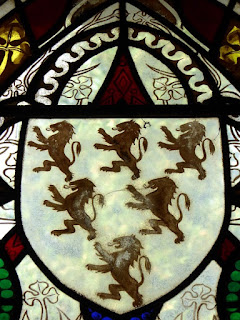 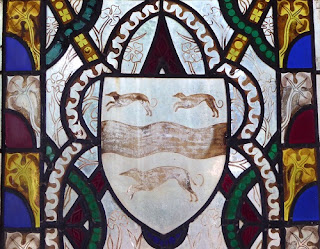 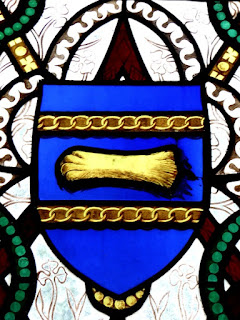 The light between the rains drew attention to the church tower (Norman base, attractive spire dating from 1837) 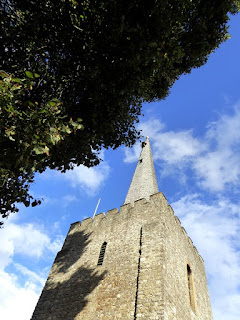 and its graveyard's situation on a hillock with the North Downs in the background. 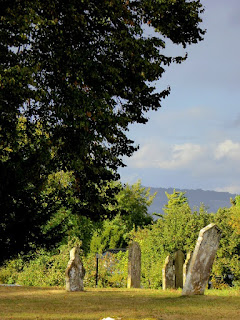 No visible rainbows then, though we saw plenty amid downpours on the train journey back. But the sun held for our strolls down lanes 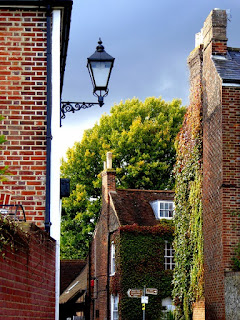 and around the Abbey, a very historic institution founded by that same Bishop Gundulf of Rochester responsible for the White Tower. In the 18th century Frazer Honeywood incorporated a new home into the ruins, and since 1916 an order of nuns has been established here. Which means that you can only go in during festival specials, but it's fun to glimpse the tower 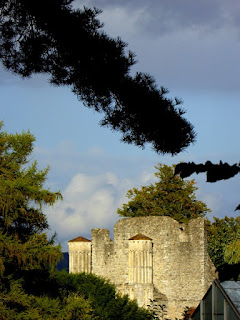 and walk around the perimeter, which includes a handsome barn (where Sophia, Tom and another cellist, Adrian Bradbury, had performed as Chamber Domaine the previous afternoon) 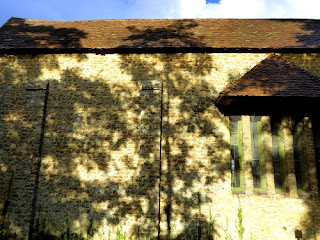 and a fine fringe of beech trees 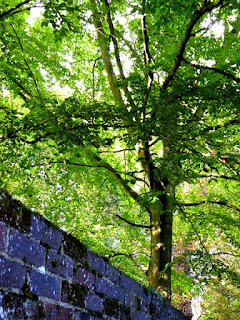 while walking back into town along Swan Street you pass a fountain where the abbey stream emerges. 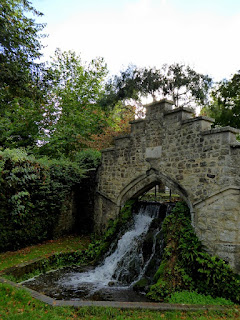 Turner depicted this and other abbey views. The tower to the left of his image, courtesy of Tate Britain, is now more or less concealed by trees (maybe we'd better come here in the winter). 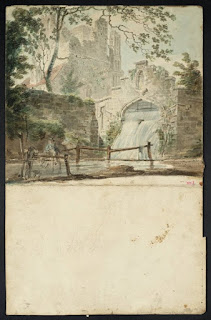 The 15th century exterior of the gatehouse is fine too. 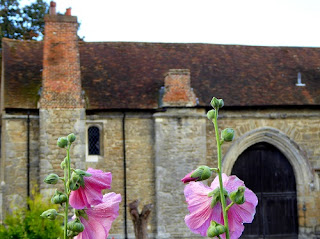 My dawdling meant we just missed one of the every-half-hour trains back to London, but sitting on a platform bench in the sun wasn't a hardship, and the Spanish chestnuts above were showering down their riches. 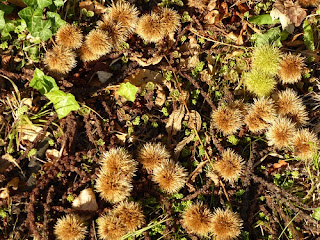 Monday afternoon's delights I've recounted in full on The Arts Desk, but it's good to be able to note the serendipity of Sophia's having performed the astounding Prokofiev Cello Sonata with both Steven and Bulat, and to record how well the Schumann strand tied in with a little book of deep thoughts and practical advice, namely this: 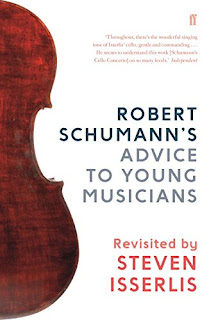 It's hard to choose my favourite nuggets - Steven selected several of his own in a neat little preview, also on The Arts Desk - because everything's good here, not just Schumann's maxims but also Steven's footnotes, which of course are a lot longer but manage to be personable and witty without ever tipping over into the arch. The keynote is immense personal affection and admiration - 'I'm writing this book because I need to profit from Schumann's wise advice as much as any other reader!'. It should be a well deserved moneyspinner and a perfect stocking-filler, and Faber's presentation is delectable, but there's plenty of profundity and knowledge lightly worn. To be re-read at regular intervals.
Posted by David at 14:26

Remarkable little finds, as always, in your photos of the church. The Batman style winged skull and shrouded skeleton remind me Halloween is just around the corner here. I was fascinated by this: "Morricone writes out all the notes without stems or anything else to indicate the length - that's up to the player." I wonder if Helmut Lachenmann knows this. I'm suspecting so. Just recently read a very interesting interview with him, "I Am the Wound," in which he talks a good bit about Morricone. He loves Morricone's music, but the feeling, it seems, is not returned. He told of a concert that included both his and Morricone's music: "The program consisted of my “Mouvement,” two works by the Villa Massimo residents, and two pieces by Morricone: a suite from the film music to “Once Upon a Time in the West,” in some arrangement, and a composition for piano and four winds, kind of a piano quintet. But then I found out that Morricone apparently called the presenter and said, “If Lachenmann’s going to be there, then I won’t allow my film music to be performed. I’ll get up and go.” Still, we sat next to each other at the concert peacefully. But I didn’t dare ask him about his film music." Amusing, no?

Golly, I didn't know of that connection. As you know, I'm a Lachenmann fan and Morricone's film music is - well, just great for the context, but I wouldn't seek it out in context. And I suspect from what Richard intimated that one Riflesso was probably enough. More fool him for not valuing Lachenmann's singular genius.

Could do without Halloween here, it's become an industry thanks to American import... But there was a great photo of Jemima Khan, about whom I have mixed feelings - wouldn't be surprised if you didn't know who she was - dressed up as Ivana with a Trump mannequin draped over her with one hand on the expected place. That might have been a fun Halloween party. Also, of course, the Trumpkin was good.

I didn't know you were a fan of Lachenmann, though you join respected friends in appreciating his work. I made some early forays and gave up. Just doesn't speak to me and made me miserable to keep trying with it.

Well, it's not that I love it, but I do find the confronrational aspect a breath of fresh air. At least it communicates. Not heard much of the large scale stuff live. Mei Yi Foo featured some fascinating piano pieces in a recital which really impressed me.